Mental, neurological, and substance use (MNS) disorders are major contributors to morbidity, disability, injury, and premature mortality, and increase the risk for other health conditions. The estimated 12-month prevalence for the Americas for MNS disorders ranges from 18.7% to 24.2%; anxiety disorders range from 9.3% to 16.1%; affective disorders 7.0% to 8.7%; and substance use disorders 3.6% to 5.3%. Though mental health is acknowledged as an essential component of overall health, evidence from the Region shows critical treatment gaps among people suffering from MNS disorders of up to 73.5% among adults with severe/moderate disorders and 82.2% among children and adolescents. Historical analyses find minimal change in the treatment gap in the Americas as a whole during the past 10 years and a possible increase for Latin America (). Table 1 shows the lifetime and 12-month estimated prevalence rates for specific mental disorders in the Americas and their corresponding percentage of treatment gaps.

Table 1. Prevalence and treatment gap of mental disorders in the Americas, 2013

Source: Adapted from PAHO, Treatment gap in the Americas, technical document ().
Note: Lifetime and 12-month prevalence correspond to population-based weighted rates. Treatment gap corresponds to the mean percentage of identified people with mental disorders not receiving any mental health service. Results are given as percentages.

Dementia is a growing concern in Latin America and the Caribbean (LAC), which has the highest rates worldwide with a 12-month prevalence of 8.5% among persons aged 60 and over (). Moreover, with more people reaching an advanced age, a significant rise in dementia is projected particularly in LAC, with an increase of 47% in the prevalence of severe disabilities in the group aged 60 and over. Figure 1 shows estimations of the populations suffering dementia in the Americas and worldwide.

Note: Estimations based on the population 60 years and older in 2010. Source: Adapted from WHO, Dementia: a public health priority ().

Suicide is an important possible outcome of mental illness with a mortality rate of 7.3 per 100,000 in the Americas. More than 90% of suicidal victims have a diagnosable chronic mental disorder such as depression as well as substance use disorders. There is a clear gender imbalance in suicide attempts, with females more likely to attempt suicide and males more likely to complete suicide. The highest rates were found in the over-70 group, while in North America and the Non-Latin Caribbean, females aged 45–59 were at highest risk (). Figure 2 shows the suicide rates and the contribution of suicide among the other causes of death by age group in the Americas.

Figure 2. Suicide rates and the contribution of suicide among causes of death in the Americas, 2014

Source: Adapted from PAHO, Suicide mortality in the Americas ().Note: A. Suicide rates per 100,000 population by age groups. B. Contribution of suicide in percentage among other causes of death by age groups.

A detailed analysis of the disease burden of mental illness in the Americas is underway, partially correcting the known sources of bias that traditionally lead to an underestimation of the mental illness burden, which in turn results in underfunded mental health services, poorly prepared health systems, and worse general health outcomes (). Preliminary results show that MNS disorders are by far the largest source of disability in the Region. If we consider disability plus mortality, other groups of illnesses gain relevance due to their lethality, but despite this relative increase in other disease groupings, mental illness accounts for 19% of disability-adjusted life years (DALYs), ranging from 9% in Haiti to 23% in Canada, and it is responsible for 34% of years lived with disability (YLDs), ranging from 23% in Haiti to 36% in Brazil, Chile, and Paraguay. Moreover, depression is the leading factor, responsible for 8% of YLDs, among all conditions in the Americas (). Figure 3 shows the burden of disease attributed to MNS disorders as a percentage of DALYs and YLDs for selected countries in the Americas, and compared with other noncommunicable diseases, as well as communicable, maternal, child, and nutritional diseases and injuries.

Figure 3. Burden of disease attributed to MNS disorders in selected countries of the Americas, 2015 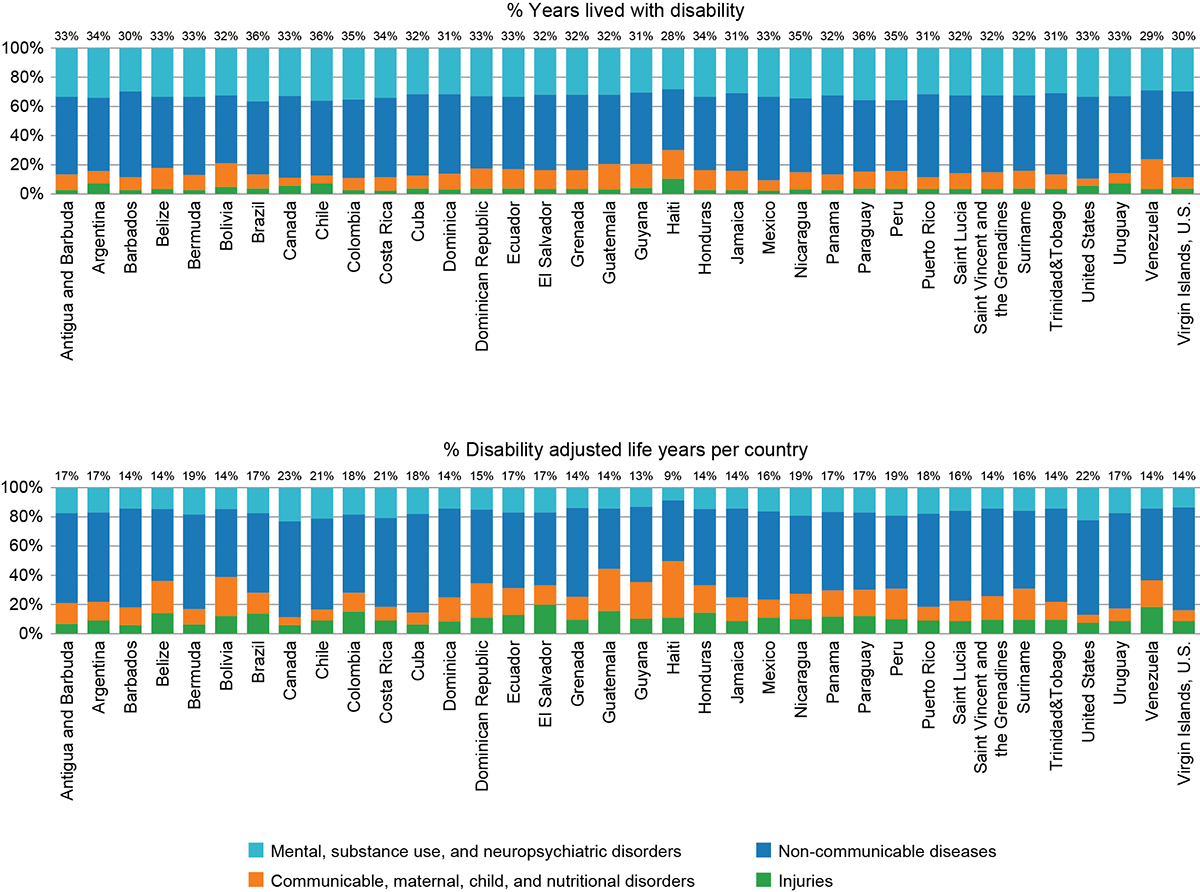 Note: A. Percentage of years lost to disability (YLDs) per country in the Americas. B. Percentage of disability-adjusted life years (DALYs) per country in the Americas. Mental, neuropsychiatric, and substance use disorders include psychotic, mood, anxiety, eating, drug use, alcohol use, autism spectrum, conduct, and attention deficit disorders; intellectual disability; dementia; epilepsy; tension-type headache; migraine; self-harm; and an estimation for psychiatric pain disorders, as per the model specified in Refs. (). Noncommunicable diseases (except mental illness) include the following groupings: cardiovascular and circulatory disorders; chronic respiratory disorders; neoplasms; digestive disorders; cirrhosis; diabetes, urinary, blood, and endocrine disorders; other neurological disorders; musculoskeletal disorders; and other NCDs.
Source: Adapted from Global, regional, and national incidence, prevalence, and years lived with disability for 310 diseases and injuries, 1990–2015: a systematic analysis for the Global Burden of Disease Study 2015 () and Global, regional, and national disability-adjusted life-years (DALYs) for 315 diseases and injuries and healthy life expectancy (HALE), 1990–2015: a systematic analysis for the Global Burden of Disease Study 2015 ().

Service delivery tends to be fragmented and there is poor coordination between health care levels. Mental institutions are emphasized at the expense of the development of community-based services. The material and human resources allocated are scarce, inequitable, and inefficiently distributed (). Figure 4 shows the distribution of budget allocations to mental health. The social and economic cost that MNS disorders represent for individuals and communities can be overcome with more investment and a shift in paradigms and models placing people and not illness in the center of the system and focusing on recovery rather than cure.

Figure 4. Distribution of mental health (MH) budget among psychiatric hospitals and other MH facilities in Latin America and the Caribbean, 2013