The Region of the Americas achieved Goal 4 of the Millennium Development Goals due to a 67% reduction in under-5 mortality rates between 1990 and 2015, declining from 53.8 per 1,000 live births in 1990 to 17.9 per 1,000 live births in 2015. As shown in Figure 1, there was also a reduction in the infant and neonatal mortality rate. As a result, more children are surviving childbirth, and more children are reaching their first and fifth birthdays.

Figure 1. Estimates of mortality in children under 5 years, under 1 year, and neonates in Latin America and the Caribbean, 1990–2015 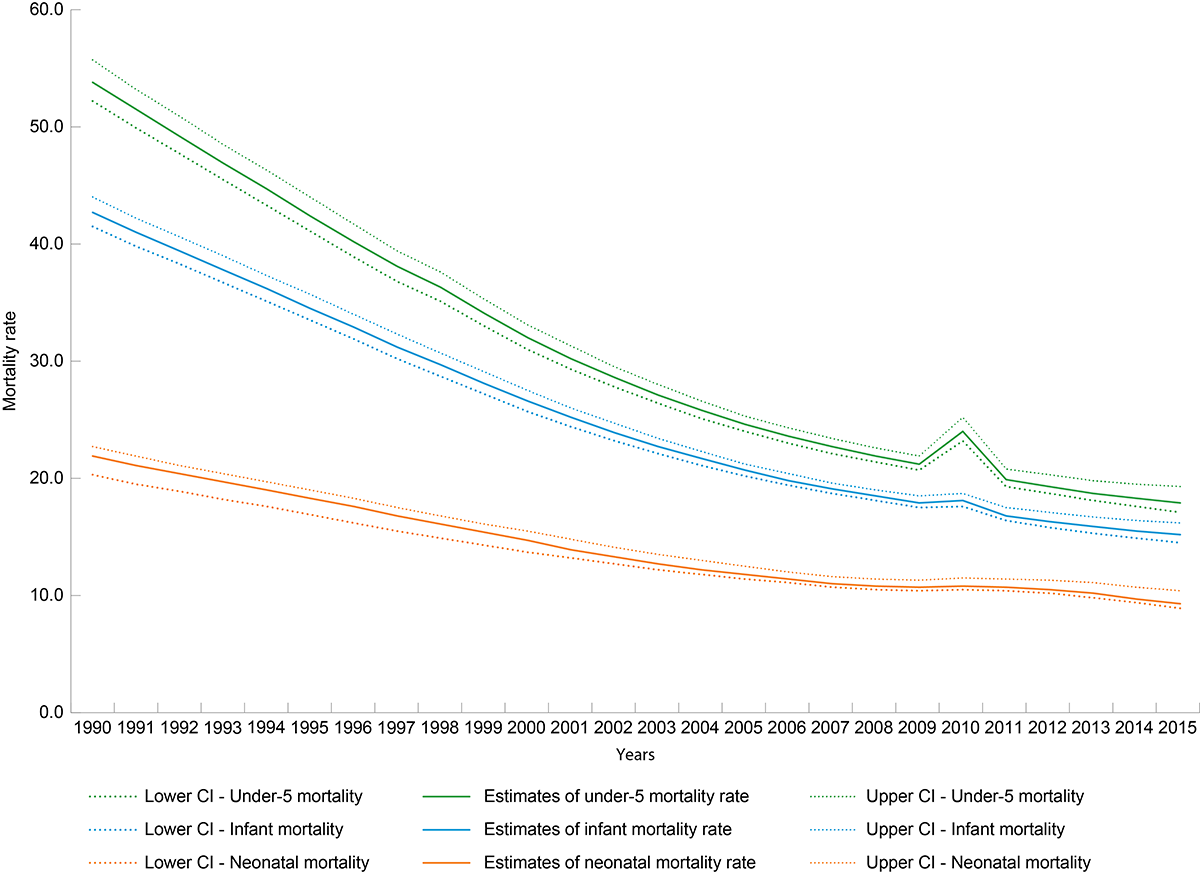 A more detailed analysis of the under-5 mortality rate shows that the risk of dying decreased for all age subgroups, but the rate of reduction varied (Figure 2). The annual rate of reduction was largest in the age group 28 days to 1 year (4.83%), followed by the age group 1 to 5 years (4.51%). The reduction was smaller in the age group from birth to 27 days (3.02%) and the group from 28 weeks of gestation to birth (2.34%) (). Because of the significant reductions in post-neonatal deaths, the majority of child deaths are now either neonatal deaths or stillbirths. This situation has generated focused international efforts to reduce stillbirths and neonatal mortality, as well as improve the integration of women’s, maternal, and neonatal health interventions and strategies.

Figure 2. Probabilities of dying per 1,000 pregnancy completions and annual rates of reduction from the 28th week of pregnancy to age 5 years, between 2000 and 2015 in Latin America and the Caribbean 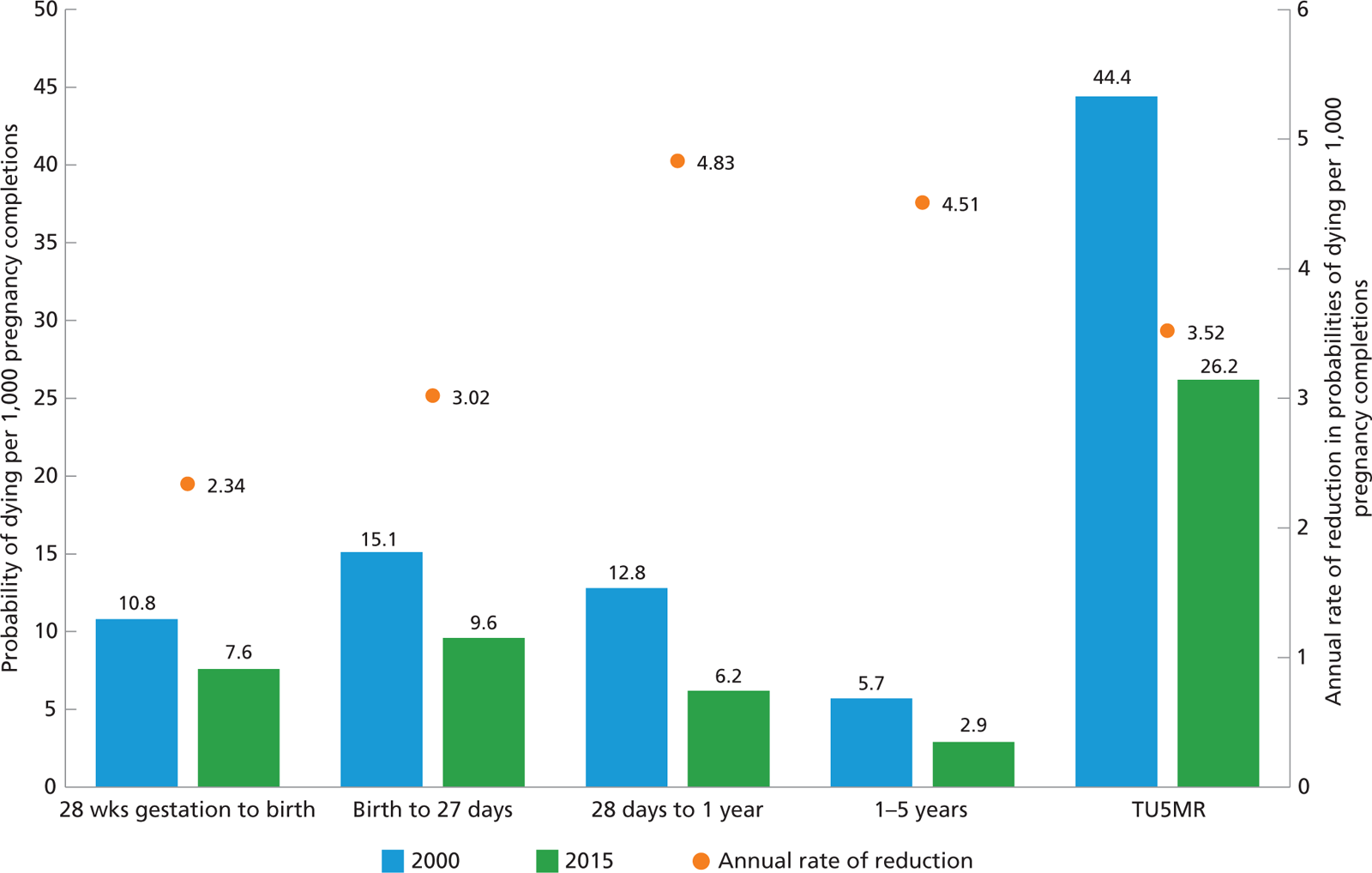 Mortality due to diarrhea, pneumonia, undernutrition, and diseases that can be prevented by vaccines has decreased significantly in the Region. Even so, as shown in Figure 3, diarrhea and pneumonia continue to be significant causes of death; in 2015, they caused 14% of total deaths in children 1–59 months of age. An integrated approach to diarrhea and pneumonia could produce a 14% reduction in the under-5 mortality rate ().

Figure 3. Causes of deaths (%) among children under 5 years of age by age in Latin America and the Caribbean, 2015 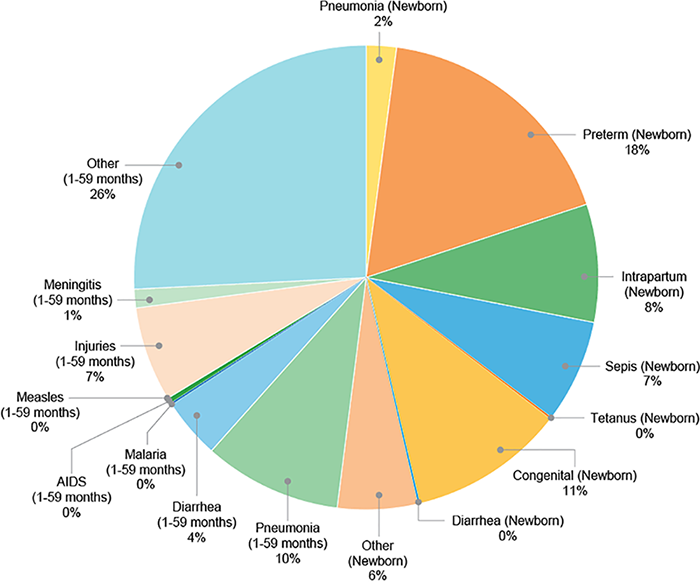 Source: WHO and Maternal and Child Epidemiology Estimation Group (MCEE), 2015.

Because the Region has made progress addressing the root causes of diarrhea and pneumonia (i.e., water and sanitation, housing conditions, extreme poverty, etc.), the number of children affected by these two conditions is decreasing. However, the current cases represent families and communities that are the last to benefit from such progress and are also likely to have poor access to health services and health information. For example, diarrhea as a cause of under-5 mortality is 10% in Haiti, 8% in Nicaragua, 7% in Guatemala, and 6% in Bolivia. In these countries, the use of oral rehydration salts is low (around 50%). The proportion of pneumonia as a cause of under-5 mortality is considerably higher in these countries: 23% in Haiti, 17% in Guatemala, 16% in Nicaragua, and 14% in Bolivia; only 50–60% seek health services when symptoms of pneumonia are present. Making and sustaining improvements will require innovation, adequate levels of resources, and a long-term commitment.

Interventions to eliminate these causes of death and disease are well known, cost-effective, and within reach in most countries: vitamin A supplementation, vaccines for rotavirus and measles, safe water and improved sanitation, breastfeeding and adequate complementary food, hand-washing with soap, and improved case management. However, the challenge is to reach a high level of coverage in those households and communities that need it the most. A commitment to end these preventable deaths is an opportunity to better integrate interventions that promote optimal development and nutrition. The benefits would be two-fold: a decrease in mortality rates and survivors who would be better able to maintain their health in the years ahead.

Due to the significant reduction in under-5 mortality, attention is gradually moving to causes of disability and morbidity. In contrast to the causes of deaths, conditions that cause disability and illness among children (as well as other age groups) have not been markedly reduced.

The three main causes of years lived with disability (YLD)—iron-deficiency anemia, skin and subcutaneous diseases, and diarrheal diseases—contributed 51% to YLD in 1990 and 54% in 2015. Neonatal and preterm birth complications contributed 3% of YLD in 1990 and remained unchanged in 2015 (). More advocacy is needed to make greater use of this type of data (and not only mortality data) in discussions that shape public policy agenda.

The group of children aged 5–9 has been neglected with respect to health interventions and measurement data. Their risk of death is lower than for any other age group, so it is not surprising to see less focus on this cohort.

Road injuries and unintentional injuries are among the leading causes of death among children 5–14 years old in LAC. Infectious diseases (diarrhea, tuberculosis, meningitis, and respiratory infections, among others) are the second-most common cause of death in this group. Cancer and HIV infection in LAC are moving up the ranks, when comparing 1990 and 2013 data ().

Information is limited on the burden of nonfatal diseases and conditions in children 5–9 years old. Figure 4 shows that iron deficiency, asthma, and skin and subcutaneous diseases are the main causes of YLD (45%); major depressive disorders, conduct disorders, and anxiety disorders are becoming more important (11%).

Figure 4. Burden of disease in children 5 to 14 years in years lived with disability (YLD),
1990 and 2015, Latin America and the Caribbean 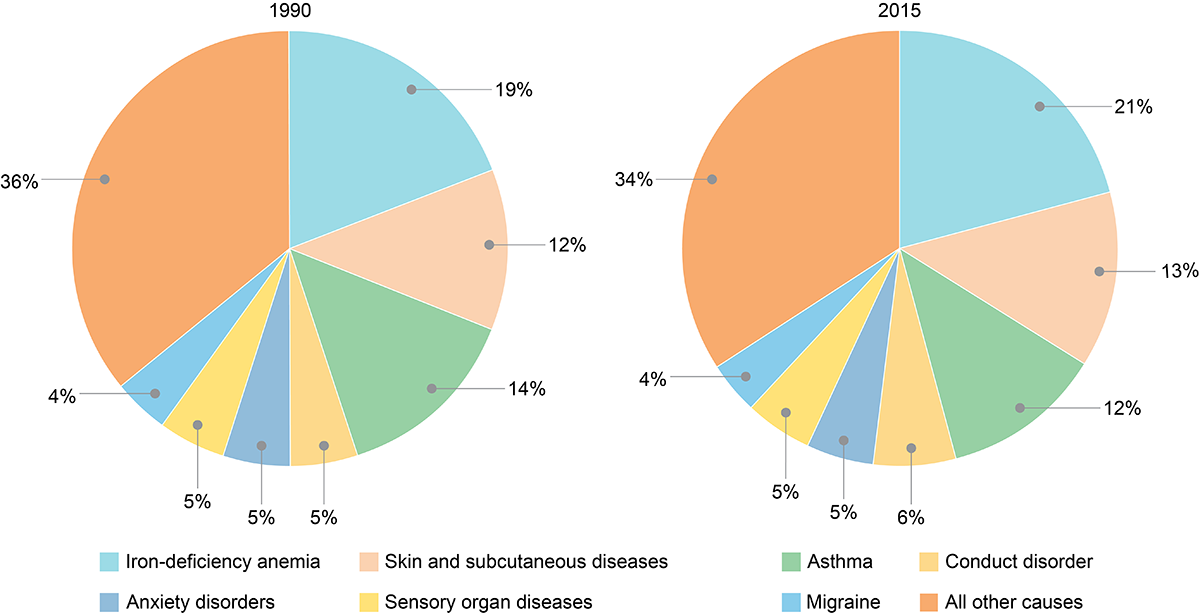 The process of growth and development are by nature interrelated, interdependent, and mutually reinforcing. Efforts and resources must be directed in a way to simultaneously promote survival and development intellectually, emotionally, and socially. This notion is embedded in the 2030 Agenda and the “Survive, Thrive, and Transform” objectives of the Global Strategy for Women’s, Children’s, and Adolescents’ health.

A 2016 article estimates that globally, 43% of the 249 million children younger than age 5 in 2010 are at risk of not reaching their developmental potential (). In LAC, 9.7 million children are estimated to be at risk of poor development due to extreme poverty; if those living in moderate poverty are also included, that number increases to 11.9 million (Table 1). The article also estimated the cost of inaction. The 43% of children who are at risk of not reaching their full potential will earn as adults, on average, 26% less per year than they otherwise would have earned. The cost of not reducing the prevalence of stunting to 15% or less and not addressing developmental delays is several times more than what some countries currently expend on health or education (). Interest in early childhood development is increasing in the Region and it is likely to be the driver of a more effective intersectoral, interinstitutional action in upcoming years.

Table 1. Regional estimates of number (in millions) and prevalence of children at risk of poor development in 2004 and 2010, using extreme or moderate poverty ratios in Latin America and the Caribbean