Currently, young people comprise the largest cohort in the history of the world and the Region. An estimated 16% of the total population of the Americas is aged 10–19 years; in Latin America and the Caribbean (LAC), that cohort is 18% ().

Education has been identified as one of the structural determinants for adolescent health. Education beyond the primary level has been associated with health benefits across the life course, including lower male injury mortality, lower female fertility, improved adult health, and increased survival of future children ().

The youth literacy rate (15–24 years) in the Americas is estimated at higher than 98%, with a gender parity index close to 1 (). However, the percentage of adolescents enrolled in secondary school is significantly lower; in most countries in the Americas, it ranges between 60% and 80%. In all countries except Paraguay and Guatemala, more girls are enrolled in secondary school than boys. A few countries in the Region, including Guatemala, Nicaragua, and Suriname, have secondary school enrollment rates below or close to 50% () (Figure 1). 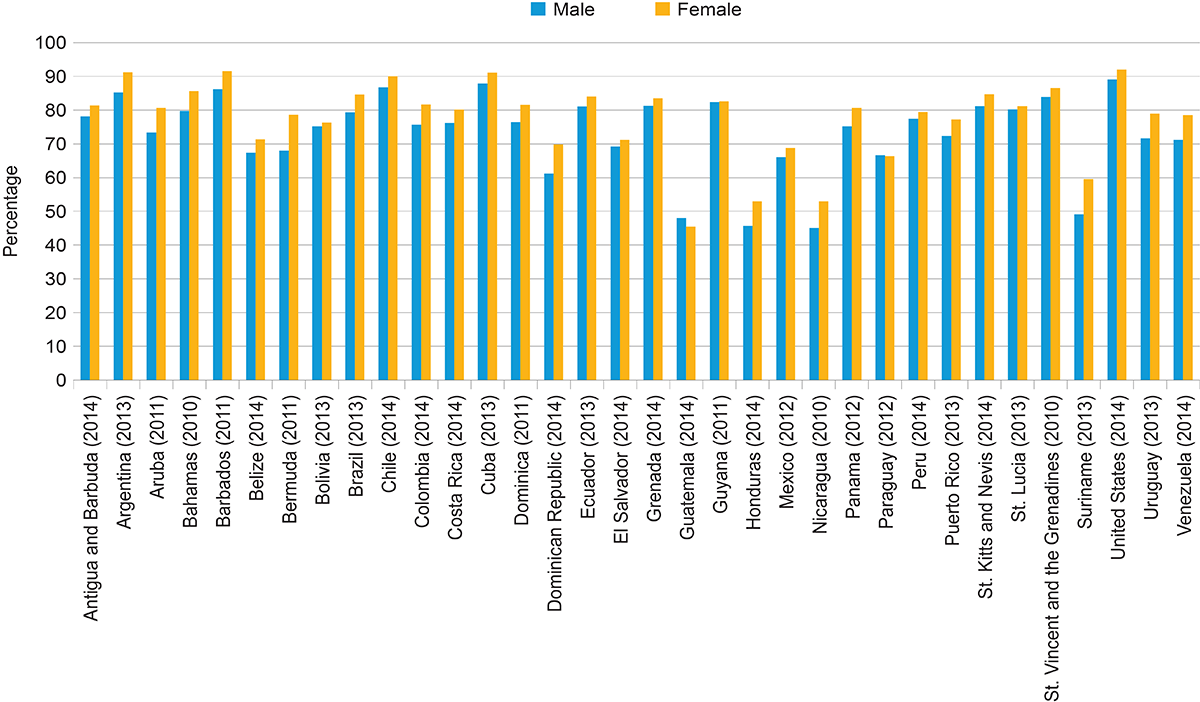 The main causes of adolescent death in the Americas are external, with homicide, suicide, and traffic fatalities being the leading causes in most countries. The regional age-adjusted mortality rates for adolescents (calculations based on data from 26 countries with available data for 2008 and 2012) indicate that the overall adolescent mortality rate has increased among males and decreased among females. Among both males and females, homicide and suicide increased as a cause of death and land traffic accidents decreased (Table 1, Figures 2, 3, 4). Survey data indicate that adolescent males commit suicide more frequently, but adolescent females attempt suicide at higher rates than males (). 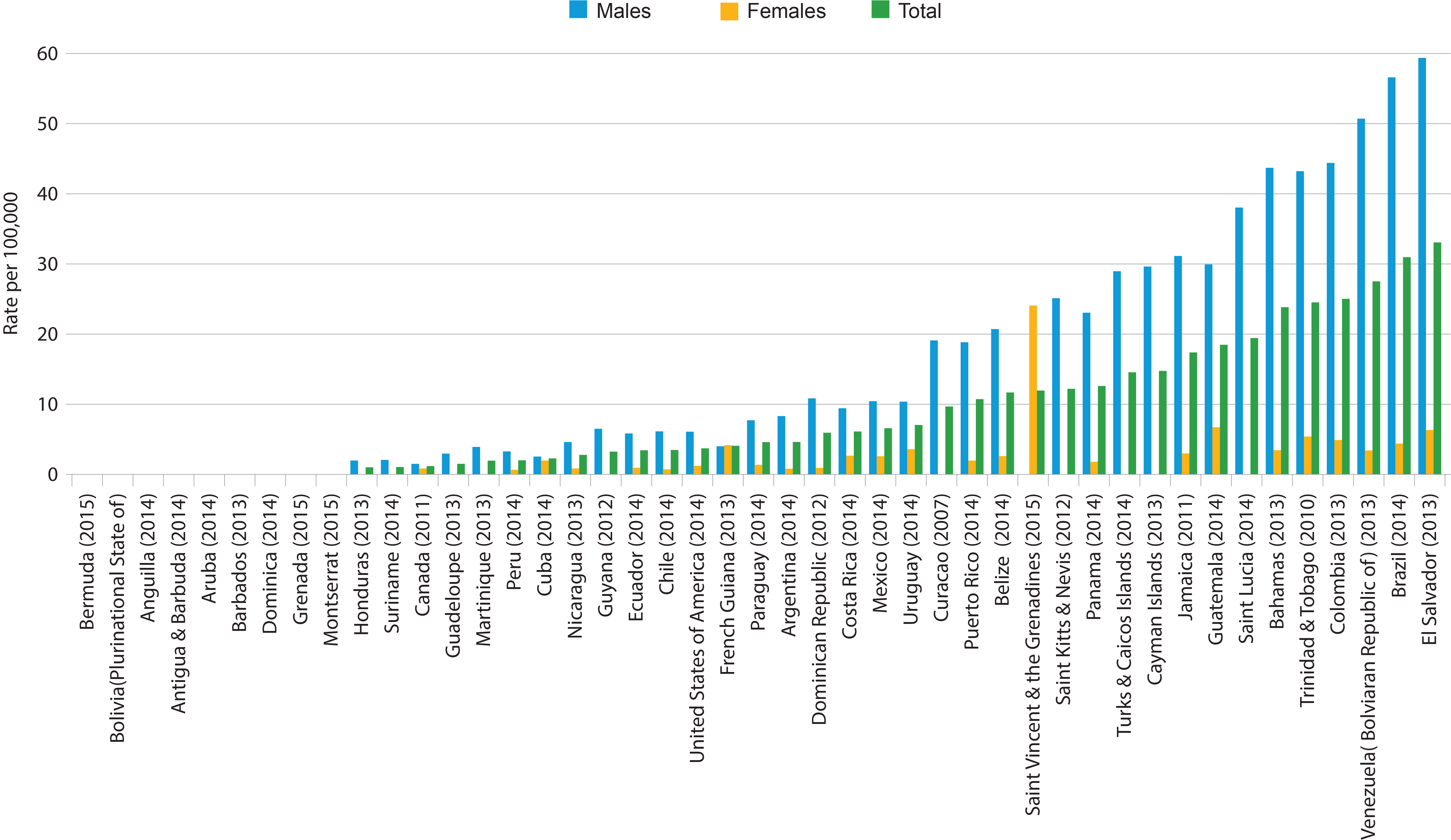 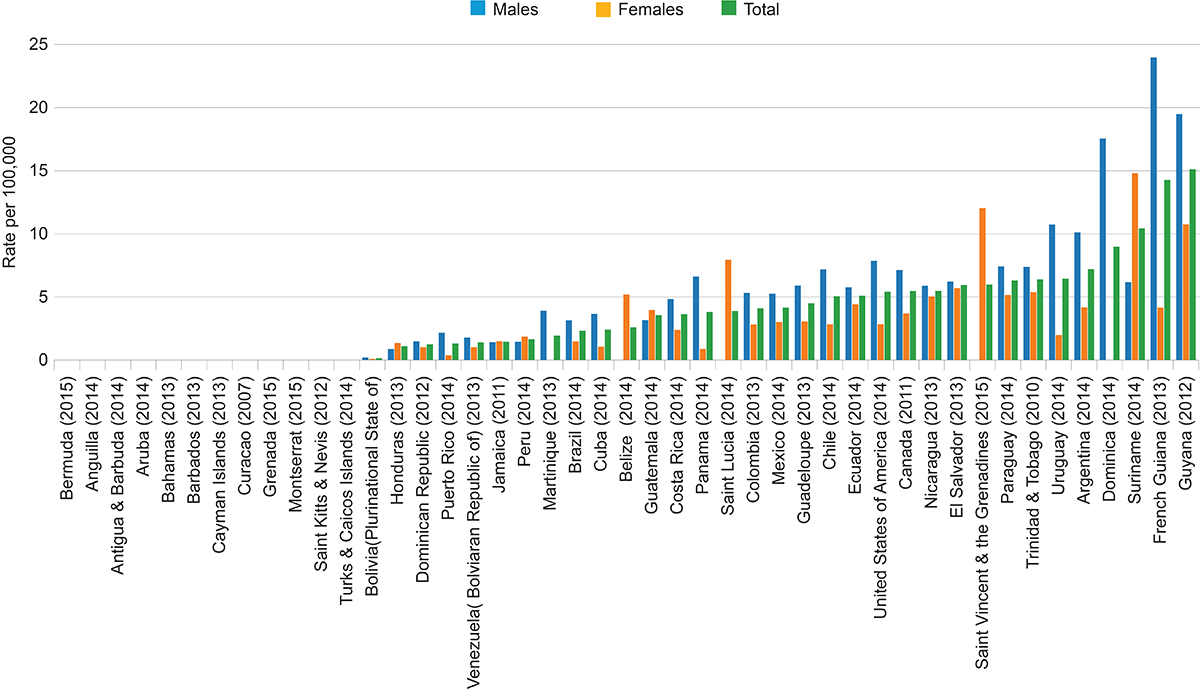 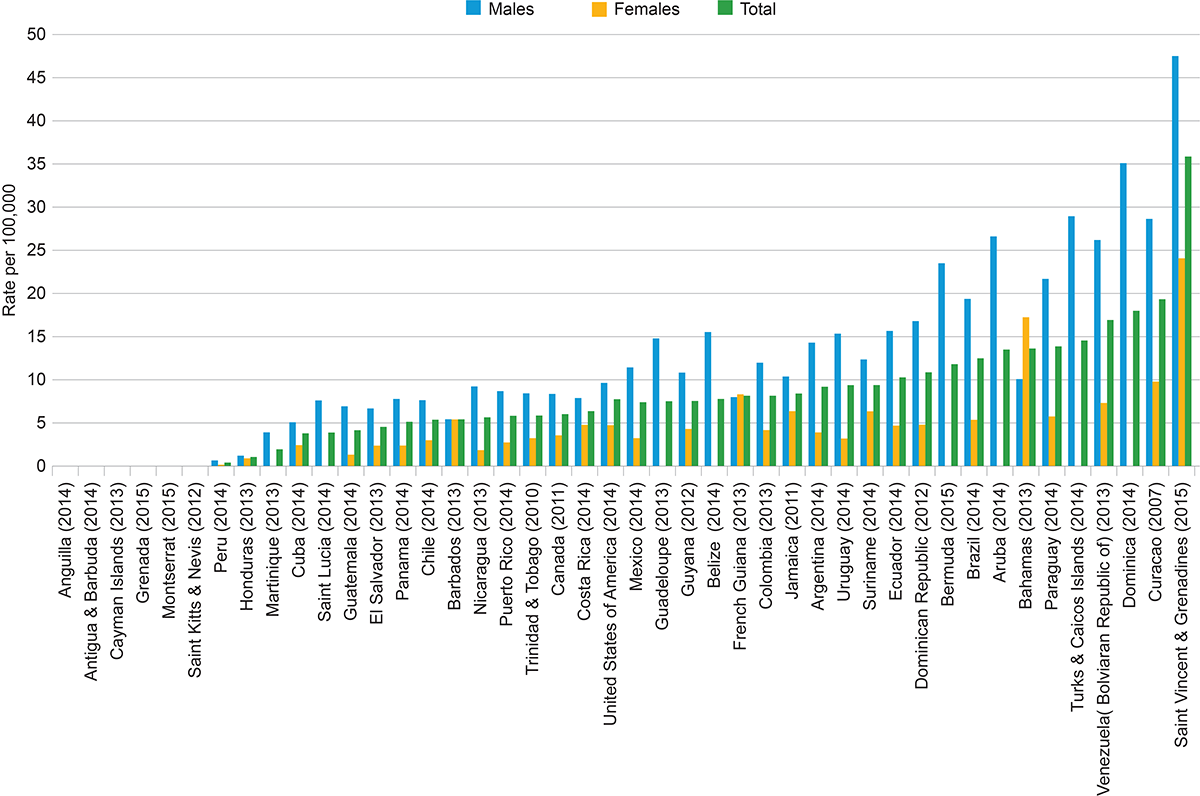 Good nutrition is an essential element of good health in adolescents; it improves school and educational performance, supports stronger immune systems, reduces the risk of disease across the life course, and in the event of pregnancy, it reduces the risk of adverse maternal and neonatal outcomes. The available data on anemia, overweight, and obesity indicate that adolescents in the Americas face the double burden of malnutrition, characterized by under-nutrition along with overweight and obesity (). Of the 11 countries with data on anemia in adolescents aged 12–19 years, 8 reported rates of anemia of 10% or higher among adolescent girls (Figure 5).

Figure 5. Percentage of adolescent girls with anemia in selected countries, 2008–2013

From the 25 countries with data on obesity, 24 reported that more than 15% of their adolescents had a body mass index (BMI) above 25, and of those countries, 11 reported that 25% or more of had a BMI above 25 () (Figure 6). Considering the association between consumption of sugary drinks and fast food, physical exercise, and the risk of noncommunicable diseases (NCD), the substantial number of young adolescents aged 13-15 who report frequently consuming soda and fast food is a major concern (Figure 7). 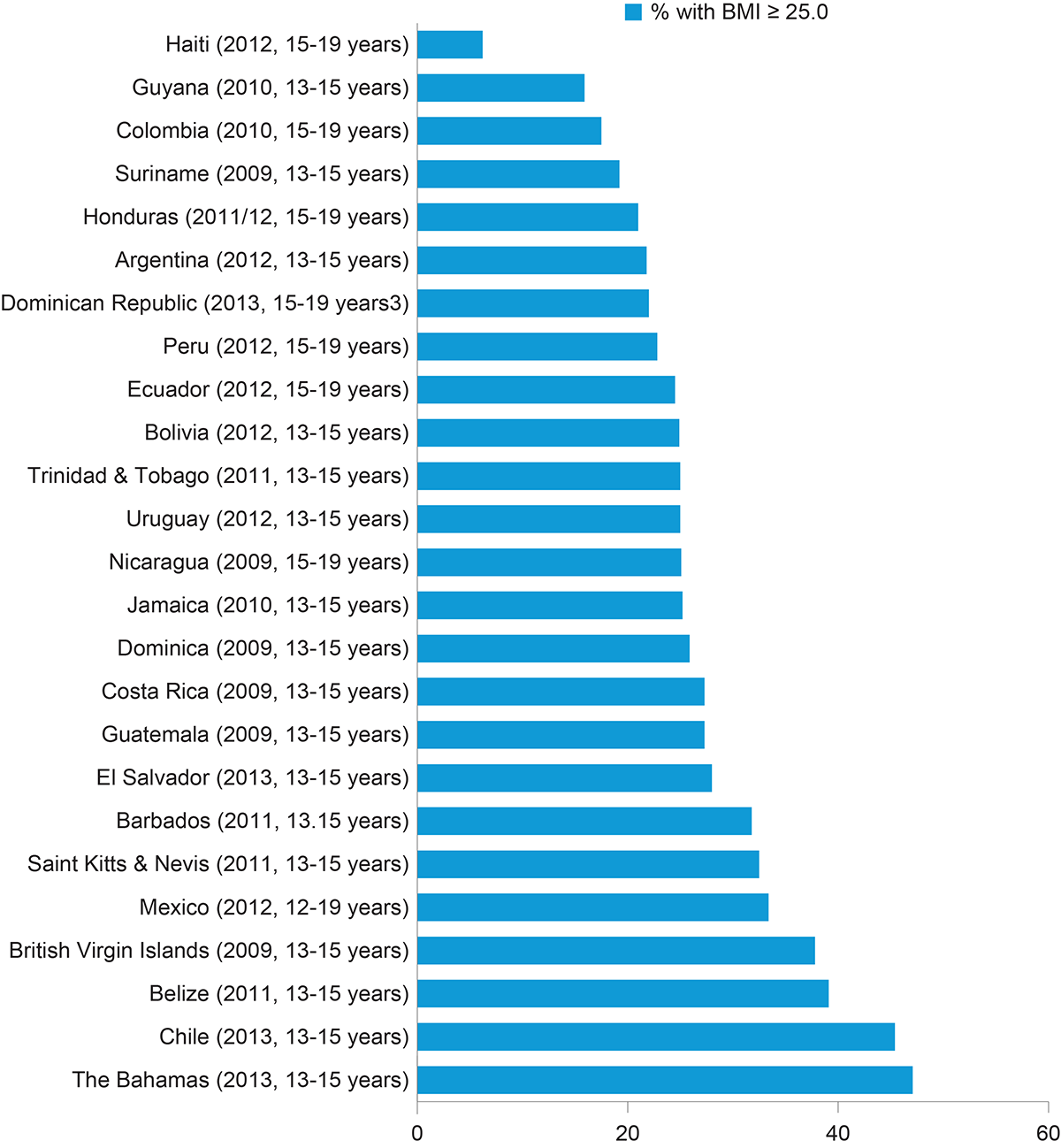 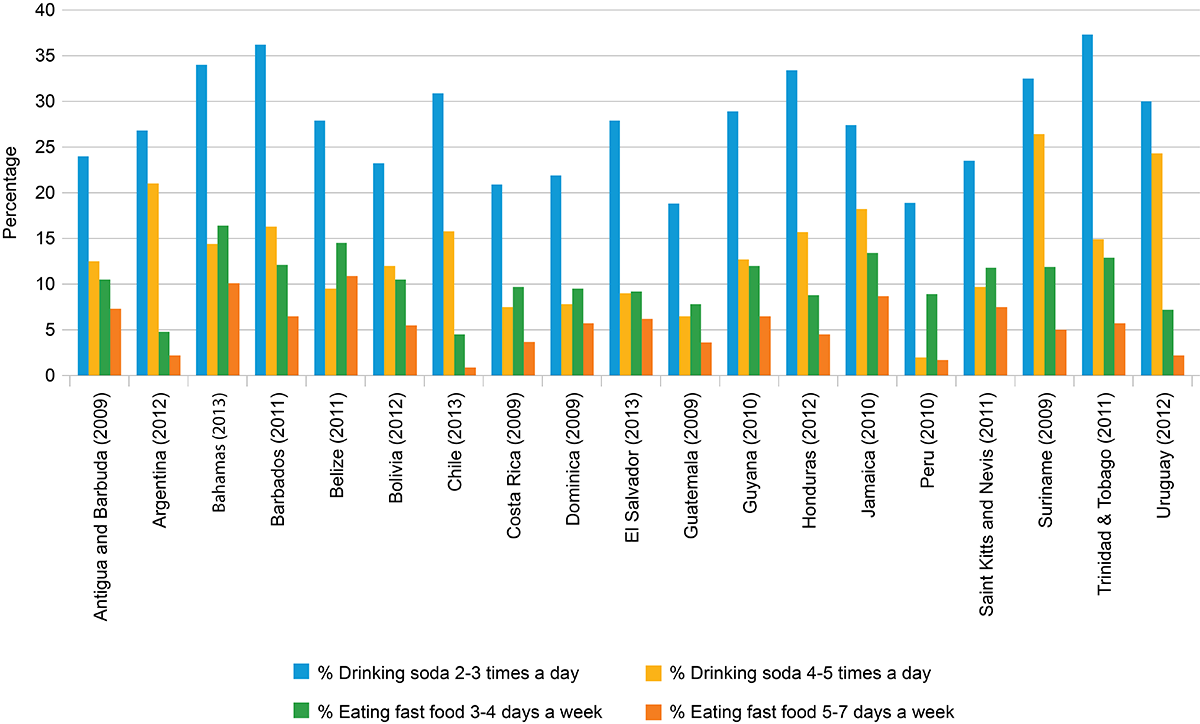 The use of substances by adolescents is not only a public health concern because of the contribution to DALYs and the negative behavioral consequences associated with intoxication. There is a growing body of evidence from neuroscience indicating that the use of psychoactive substances during adolescence, particularly heavy use, may have implications across the life course due to the effect on brain development. Psychoactive substances may generate neural adaptations that increase the risk for substance use disorders in adulthood. In addition, adolescent alcohol and marijuana users have shown changes in brain structure and functions, including lower brain volume in several regions of the brain, and reduced white matter integrity, which are associated with optimal cognitive, behavioral, and emotional development ().

There are substantial variations between countries of the Region in the use of tobacco, alcohol, and psychoactive substances. The percentage of current tobacco users among adolescents aged 13-17 years ranged from 1.9% in Canada to 28.7% in Jamaica (Figure 8). With the exception of Argentina, more male students than female students reported recently using tobacco () (Figure 8). 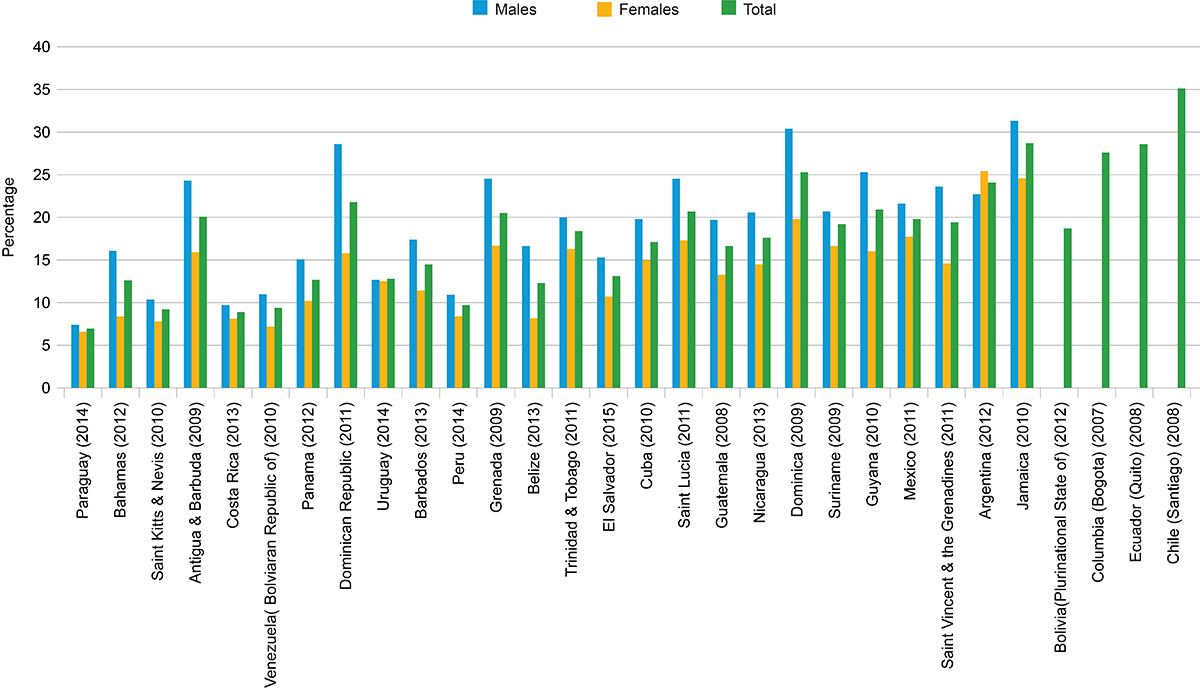 Past-month use among secondary school students ranged from 7.3% in Ecuador to 50.2% in Colombia. In Argentina, Paraguay, and Saint Vincent and the Grenadines, this age group also reported high levels of alcohol use, i.e., 40% and greater (). Heavy episodic drinking (HED) or binge drinking among adolescents appears to be increasing; at the last survey, eight countries reported higher percentages of HED among secondary students compared to previous surveys. Argentina, Barbados, Dominica, Jamaica, Peru, St. Lucia, Trinidad and Tobago, and Uruguay all reported an increase; only Canada and Ecuador reported a decline ().

Marijuana is the most commonly used psychoactive substance among adolescents, after tobacco and alcohol. Lifetime marijuana use among twelfth grade students ranged from 1.9% in Venezuela to 49.4% in Chile, and reported use during the past year ranged from 1.1% in the Dominican Republic to 38.9% in Chile. In most countries of the Region, reported marijuana use is significantly higher among males, with about twice as many males as females having used marijuana within the past year. The use of other psychoactive substances remains relatively low among adolescents in the Region. Among secondary school students, use of inhalants in the past month ranged from 0.2% in Venezuela to 7.1% in Barbados, and use of cocaine in the past month ranged from 0.07 in Suriname to 1.8 in Guyana ().

Adolescence is a critical life stage for sexual and reproductive health (SRH) due to the rapid physical, hormonal, and emotional changes during puberty, including menarche for girls and their new biological capacity to reproduce.

Good adolescent SRH requires fostering of a positive, respectful, and responsible approach to sexuality and sexual relations; the possibility of having pleasurable and safe sexual experiences free of coercion, discrimination and violence; and the freedom to responsibly decide if, when, and how often to reproduce.

Promoting and protecting adolescent SRH includes ensuring optimal access to information and education and appropriate health services, including access to safe, effective, affordable, and acceptable contraception; and protection from coerced and forced sex. Undesired outcomes include sexually transmitted diseases, HIV, unplanned pregnancies, and unsafe abortions, all of which can have repercussions that extend beyond adolescence across the life course, spilling over into the next generation.

Adolescent fertility rates in Canada and the United States are below the global average and have been declining steadily over the past decade. On the other hand, LAC has the second highest adolescent fertility rate in the world: for 2010-2015, it is estimated at 66.5 births per 1,000 girls aged 15-19, compared to the worldwide rate of 46 births per 1,000 girls (). Trends over time indicate that the adolescent fertility rate remained stagnant in LAC from 1990 to 2000, followed by a slow downward trend in the following 15 years. In comparison, the global and North American trends show a sharper decline (Figure 9). In contrast, there has been a marked decline in the total fertility rate in LAC from 3.95 births per woman in 1980-1985, to 2.15 in 2010-2015 (). Figure 8 illustrates the slow descent in fertility rates among adolescents compared with adult women during the 35-year period of 1980-2015 (Figure 10).

There are substantial variances in the adolescent fertility rate between and within countries. Central America has the highest adolescent fertility rate, followed by South America. At the country level, the estimated adolescent fertility rates range from 17.2 births per 1,000 girls in Guadeloupe to 100.6 per 1,000 in the Dominican Republic. Analysis of adolescent fertility by level of education and wealth quintiles highlights the inequities within countries, showing that girls with lower education and from families in the lower wealth quintiles, and particularly indigenous girls living in rural settings, are disproportionately affected by early pregnancy (Figure 10) (). Data on pregnancies in girls younger than 15 years is limited, but the United Nations Population Fund estimates that 2% of women of reproductive age in LAC deliver their first child before the age of 15, and that LAC is the only region in the world with an increasing trend in very early adolescent pregnancy ().

According to estimates from the United Nations Programme on HIV/AIDS (UNAIDS), HIV prevalence in LAC adolescents has been declining steadily, with an estimated 0.16% HIV prevalence among females and 0.23% in males. Encouragingly, the data show increasing trends in comprehensive HIV knowledge and condom use with nonregular partners in the Region ().

5. Pan American Health Organization. The health of adolescents and youth in the Americas. Washington, D.C.: PAHO; 2017. In press.

6. Feldstein Weing SW, Sakhardande A, Blakemore S. The effect of alcohol consumption on the adolescent brain: a systematic review of MRI and fMRI studies of alcohol-using youth. NeuroImage: Clinical 2014;5:420–437.