Between 2010 and 2014, new reported cases of leprosy in Latin America and the Caribbean declined from 37,571 to 33,789 (), a 10.1% reduction. Brazil reported 31,064 new cases in 2014, accounting for 91.9% of the new cases reported in the Region. In the same time period, the prevalence lowered from 0.38 per 10,000 inhabitants in 2010 to 0.33 in 2014, a 13.2% reduction. By 2014, all countries of the Region had reached the national goal of elimination of leprosy as a public health problem (<1 case per 10,000 inhabitants), with the exception of Brazil (1.27), while at the first subnational administrative level, seven countries had yet to reach the goal (Argentina, Bolivia, Dominican Republic, Guyana, Paraguay, Suriname, and Venezuela). During the same 5-year period, 18 countries and territories did not report any cases of leprosy, 17 countries and territories reported less than 100 new cases, and 10 countries reported 100 or more new cases.

In 2014, the rate of new cases with grade 2 disability at diagnosis in Latin America and the Caribbean was 3.59 per million population. WHO has established a global target of less than 1 per million population to be reached by 2020 (). Thus, efforts must continue by focusing on achieving leprosy elimination at the national level in Brazil, and at the first subnational administrative level in the seven countries where this goal has yet to be achieved. Preventing disability, through early case detection and treatment, and eliminating stigma and discrimination of patients and families affected by leprosy are also regional targets in line with the goals of WHO’s Global Leprosy Strategy 2016-2020 () to further reduce the burden of leprosy at the global and local level.

Tuberculosis in the Americas

The Region of the Americas was the first of the WHO regions to meet the Millennium Development Goal (MDG) targets related to tuberculosis (TB)—namely, reduction of incidence and reduction of prevalence and mortality by 50% between 1990 and 2015 (). However, progress in the detection and reporting of new TB cases, multidrug-resistant TB (MDR-TB), and TB/HIV coinfection has been slow. As a result, tuberculosis remains a serious public health problem in the Americas.

Table 1. Countries accounting for more than 90% of incident cases of tuberculosis, Region of the Americas, 2015 (estimated figures)

Figure 1. Estimated and reported incidence of all forms of tuberculosis, Region of the Americas, 2000-2015 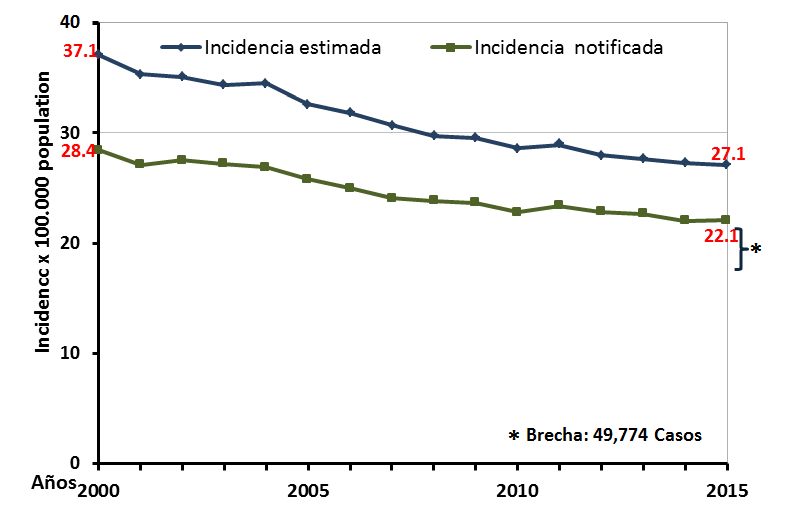 In the Americas, one of the greatest risk factors for the development of TB and death from the disease continues to be HIV infection; 82% of the incident TB cases were subjected to an HIV test in 2015. Of these patients, 12% were coinfected. According to WHO estimates, 9,700 TB/HIV cases were not detected. The coverage of antiretroviral therapy (ART) was 55%. These gaps may be attributed to insufficient implementation of TB/HIV collaborative activities in most of the countries, and to the continuing integration of TB and HIV care into the different levels of health systems.

Detection and early treatment of MDR-TB cases has improved. However, in 2015, surveillance of drug resistance to first-line drugs in notified cases only reached 29% among new TB cases and 45% among previously treated cases. That same year, 4,508 cases of MDR-TB were reported, representing 55.6% of the estimated pulmonary TB cases. This is due to the limited capacity and equipment of laboratories to provide timely and quality diagnosis. The slow implementation of new diagnostic molecular tests such as Xpert®/MTB/Rif and line probe assays (LPAs) contributes to the low resistance diagnosis ().

Differential analyses of cohorts of new TB cases of all forms and of new TB/HIV cases reported in 2014 showed treatment success rates of 76% and 56%, respectively (Figure 2). The treatment success rate for MDR-TB reported in 2013 was 55%. These results denote shortcomings in the application of patient-centered treatment, coupled with a low supply of ART for HIV-infected cases, which explains 19% of deaths in this cohort.

Figure 2. Treatment cohorts: new cases of all forms of tuberculosis and new cases of TB/HIV coinfection, Region of the Americas, 2005, 2010, and 2014 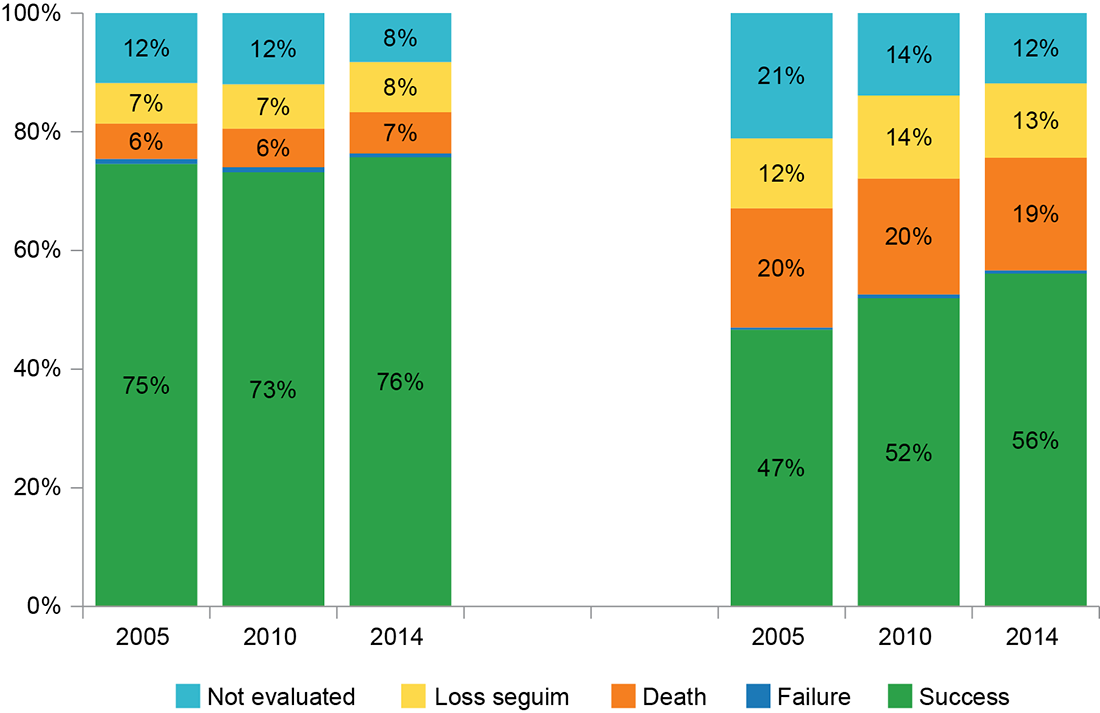 Tuberculosis control in the Americas faces new challenges from () the demographic changes taking place in the Region, including rapid urban growth, aging of the population, and migration (especially between countries in Latin America) (), and () the epidemiological transition, with an increase in noncommunicable diseases such as diabetes mellitus, smoking, alcoholism, and consumption of drugs and illicit substances (). All these factors increase the likelihood of M. tuberculosis transmission in the community and development of the disease in previously infected individuals.

It is well known that tuberculosis is closely associated with the socioeconomic factors that contribute to increased inequity and inequalities (). For example, TB prevalence is high among poor populations of ethnic minorities (e.g., African descendants, indigenous people, and migrants), prisoners, people living in the street, and others that live in low-income and marginalized areas of large cities in the Region of the Americas. Settlements of this kind in cities like Lima and Montevideo may account for as much as 60% of TB cases in the entire country.

The age distribution of TB (Figure 3) shows the persistence of active M. tuberculosis transmission in the younger age brackets. It also shows an increase in TB incidence among older adults, probably due to past TB infections and the increased life expectancy of the population.

Figure 3. TB incidence by age group and sex, Region of the Americas, 2015 Noncommunicable diseases, such as diabetes mellitus, are also a significant challenge for TB control, now and in the future. A study of the TB disease burden attributable to diabetes in the adult population of the Region showed that this disease accounted for 16.8% of TB incidence in the Region in 2013 (). Therefore, TB control should include interprogrammatic collaboration with diabetes control and other public health programs, depending on the predominant risk factors in the countries.

To control TB effectively, countries must have adequate financial resources for the purpose. In 2016, WHO received financial information for the period 2012–2016 from 26 low- and medium-income countries in the Region. They estimated that the total funding needed to control TB in the 26 countries in 2016 was US$ 496 million. Of this amount, 37% could be expected to come from domestic resources and 42% from international cooperation, leaving a funding gap of 21%, or US$ 104 million (). This assessment shows that a number of countries still depend on external resources and have large funding gaps. It is therefore essential to call for increased national political commitment that translates into financial resources for the prevention and control of this disease.

In light of these current challenges and the ongoing process of implementing the current End TB strategy initiated in 2016 (), PAHO, working jointly with national TB control programs, intends to step up its actions to support: () timely and rapid diagnosis of TB, MDR-TB, and TB/HIV coinfection; () patient-centered treatment; and () introduction of new initiatives, such as TB control in large cities (), elimination of TB as a public health problem, and TB control in migrant populations and ethnic minorities.

The framework for TB control in large cities has the following eight components: strengthening of national/local political commitment; epidemiological mapping of the TB situation; surveying and mapping of the health system and existing health care providers; adapting health care to the needs of at-risk populations; incorporating an interprogrammatic approach to TB control; having an intersectoral approach and including TB in social protection programs; promoting the engagement of civil society; and establishing systems for monitoring and evaluation. Implementation began in 2013 in three pilot cities in Brazil, Colombia, and Peru, and since 2014, the initiative has expanded to include more cities in other countries.