The population throughout the Americas is aging, although at different speeds and times from country to country (). Declining fertility and mortality indicators, especially in the early stages of life, are giving rise to rapid demographic transition in the Region (). Not only has the proportion of older persons in the Hemisphere’s population increased, but life expectancy at birth and for specific age groups has also risen considerably. Life expectancy at 60 years of age has been calculated at 21 years; 81% of the people born in the Region will live until age 60, while 42% will live beyond 80 (). Figure 1 shows the substantive increase that will occur in the population age 60 and older in the countries of the Region between 2015 and 2050. 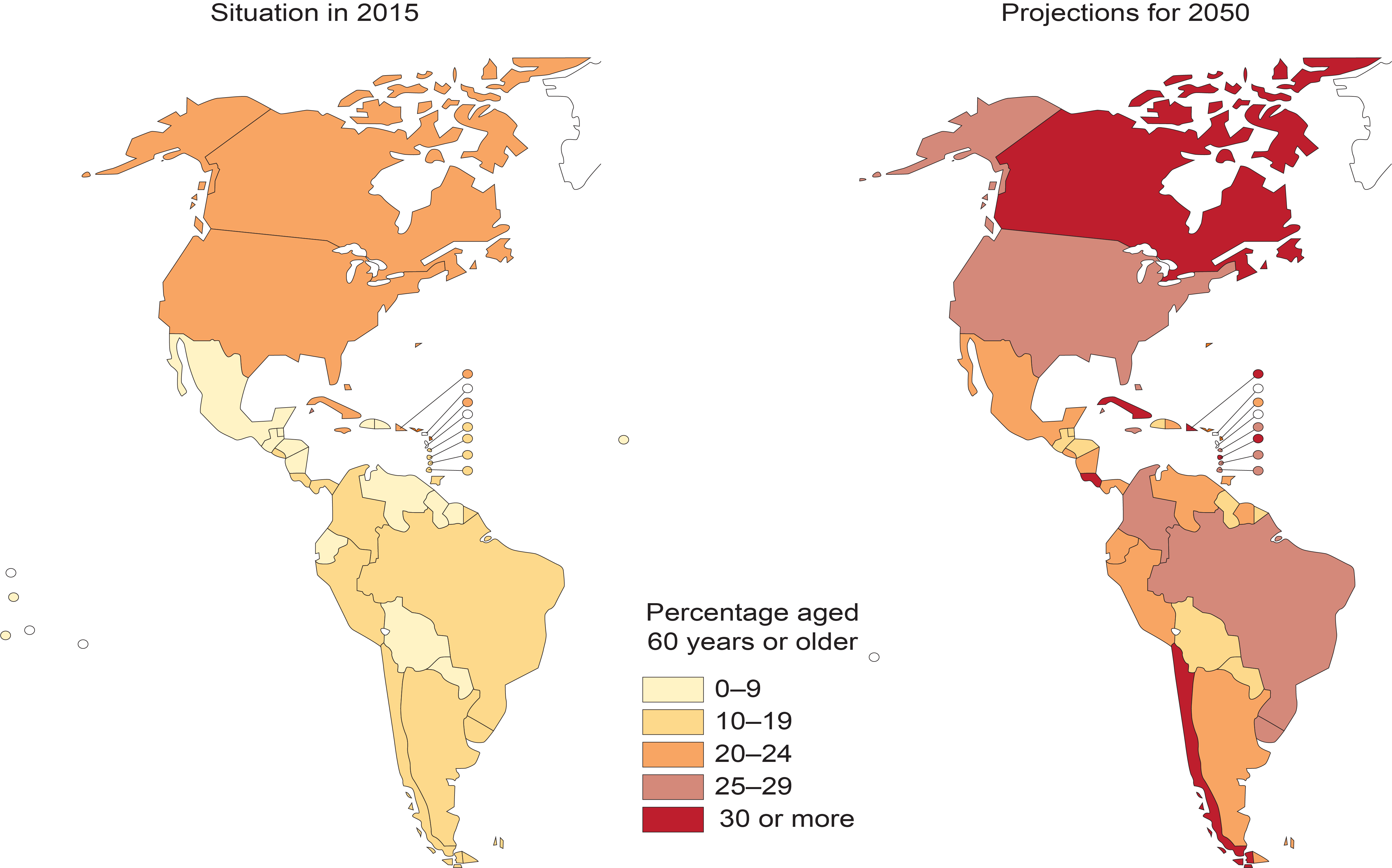 The rapid increase in the population age 60 and older is clearly reflected in the aging index, which reflects that group’s size per 100 children under 15 (). Figure 2 shows the evolution of this indicator in the Region and the world, using 2016 data. In the Americas, there is a marked, almost vertical, increase in the aging index compared with the same index, over the same period, for the world. In the period from 2010 to 2015, countries such as Canada, Cuba, Martinique, and Puerto Rico had aging indices over 100. In other words, those countries have more older persons than children. However, countries such as Belize, Guatemala, Haiti, and Honduras have an aging index of approximately 20 older persons per 100 children.

In 2025, persons aged 60 and older will account for 18.6% of the total population of the Americas. In at least 9 countries (Barbados, Canada, Chile, Cuba, Guadeloupe, Martinique, Puerto Rico, the United States, and Uruguay), the population over 60 years of age will be larger than that of children under 15, with extreme cases like Cuba, with almost two adults aged 60+ per child under 15 (183 older adults per 100 children) in 2025. As Figure 2 illustrates, the Region of the Americas will have a greater number of older people than children under 15 by 2030–25 years before the world average.

Figure 3 uses data from the United Nations Population Division to illustrate the trends in the proportion of population by select age groups. The older population (from 60 to 79 years and those over 80) is on the rise, while younger groups are trending downward (). In the next 35 years, the population of older people is projected to quadruple in Brazil, Colombia, Costa Rica, Cuba, Nicaragua, and Trinidad and Tobago. This demographic shift will have a significant impact on health systems in the coming years; that impact is analyzed elsewhere in this volume. 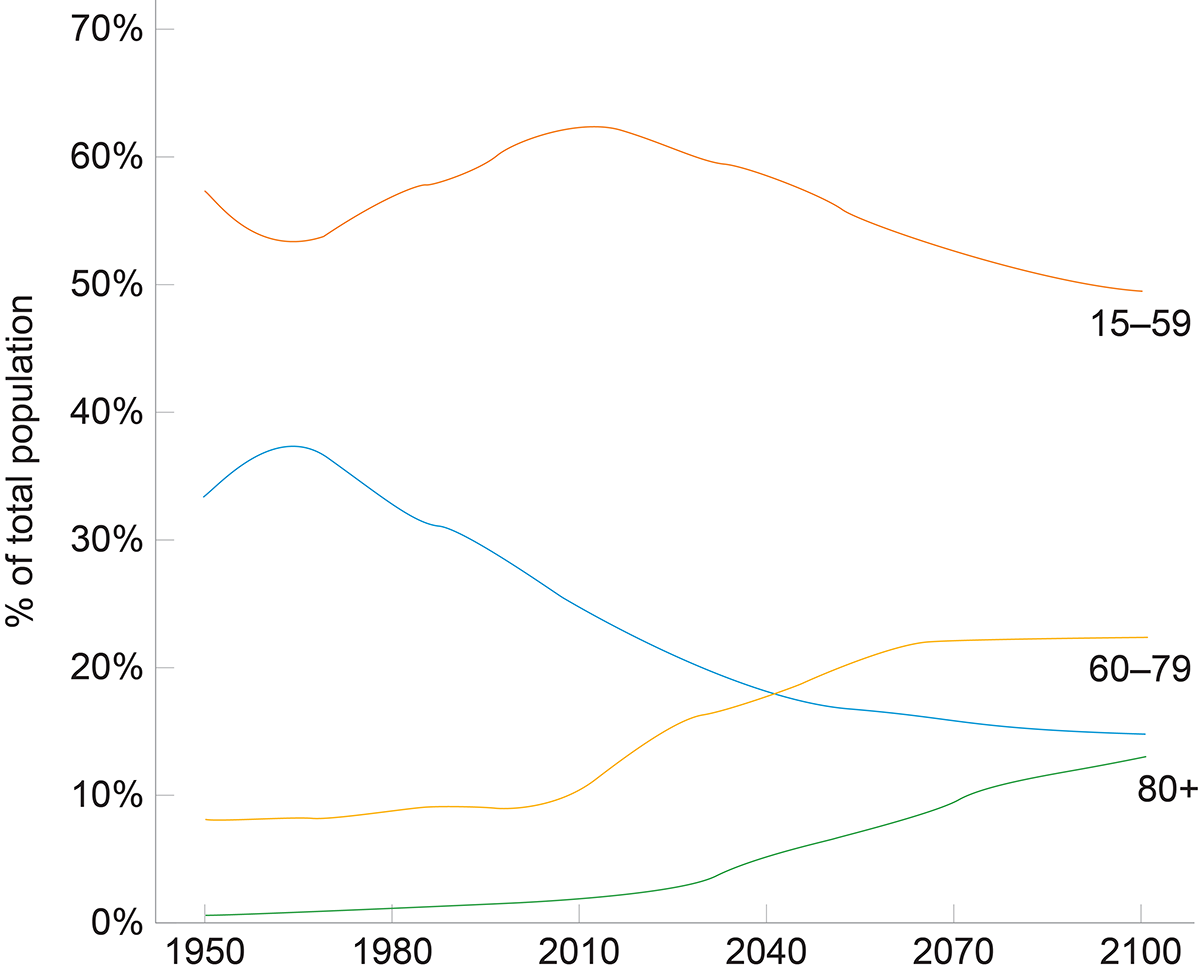 One of the most interesting and salient phenomena of this demographic shift is rapid aging within the older population, or the “aging of the aged” (). In 2016, persons age 80 and older represented 3% of the population in the Region (see Figure 3). However, this group is expected to have the greatest percentage increase, with a very marked peak starting in 2025. This situation will be common across all the countries of the Americas, and especially so in Latin America and the Caribbean (LAC), including countries that still have younger populations. The Caribbean subregion currently is the most aged in LAC and has the largest percentage of people age 80 and older (). In 2100, the population age 80 years and older will reach almost 10% of the total population and nearly 40% of all adults over 60 (Figure 4). In two countries, Martinique and the Virgin Islands, this group will represent more than half of the older population. Between 2015 and 2020, at least four Caribbean countries (Cuba, Martinique, Puerto Rico, and Virgin Islands) will have more adults of advanced age (80 years and older) than children under 5. This situation is projected to occur in the majority of countries of the Americas.

Today, Central America is the youngest subregion in the Americas, and between 2025 and 2050, the rate of growth of the older population is expected to outpace the estimated increase in the rest of the Region, including North America. In 2050, only in 6 countries (Bolivia, Guatemala, French Guiana, Haiti, Honduras, and Paraguay) will those over 80 not outnumber children under 5, which means that they are in the earlier stages of aging. However, in these countries the population age 80 and older will grow fourfold between 2010 and 2050.

This aging of the population will require a transformation of health systems, driven by this population group’s special demands for health care and specific health services. 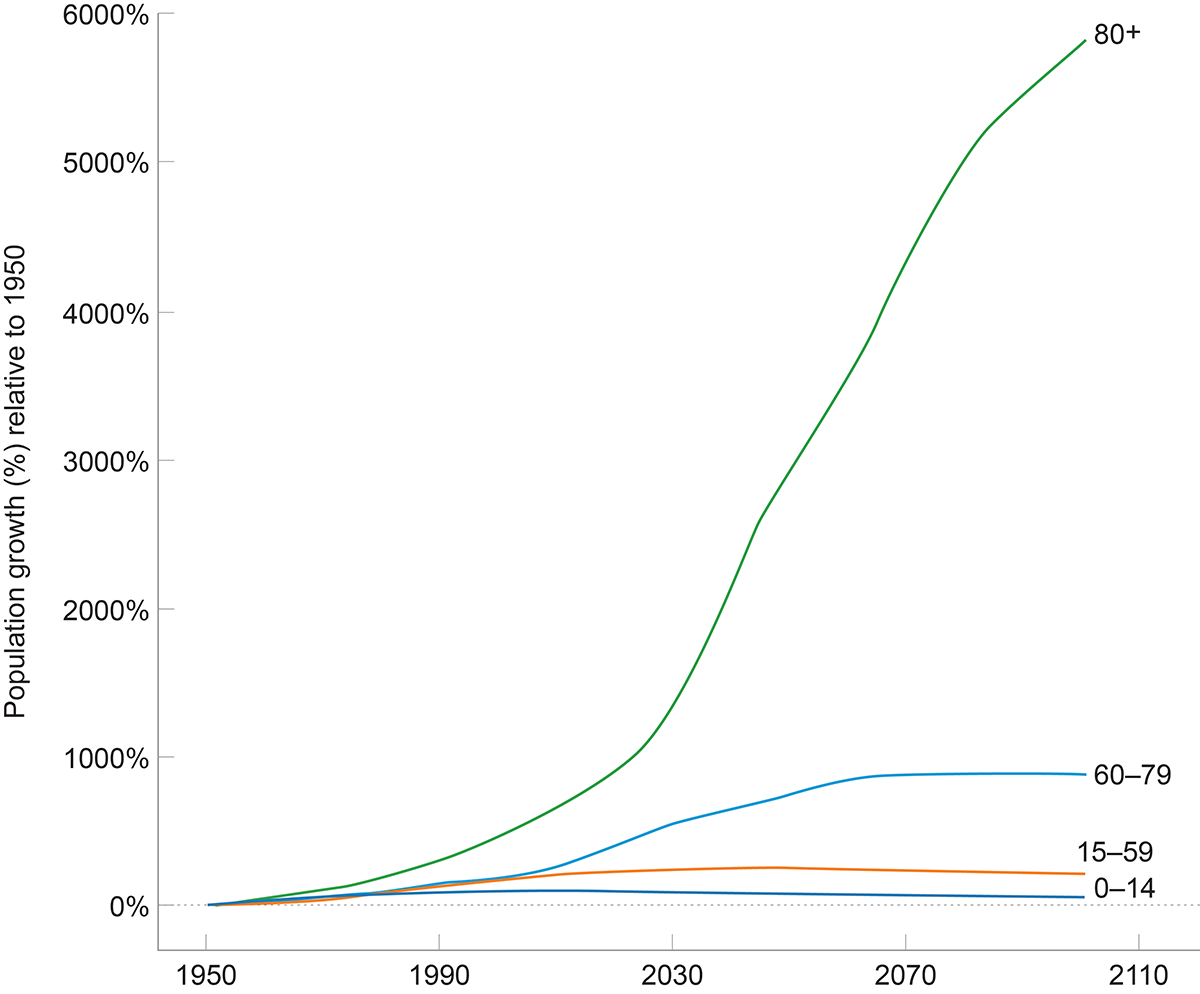 The increase in life expectancy and the extension of life until advanced ages is clearly reflected in the proportional mortality shown in Figure 5. In 2012, deaths in those over age 60 represented 71.3% of deaths in the Region of the Americas-a steady increase over the last decade. Figure 6 breaks down proportional mortality by age group and country in 2012. Three countries of the Region (Honduras, 60.7%; Belize, 52.7%, and Guatemala, 51.4%) had a higher proportion of deaths in younger people (under 60) than in older persons. Conversely, in the rest of the countries, that proportion is concentrated in older persons. Figure 6 also shows that for another group of countries of the Region (Anguilla, Barbados, Bermuda, Montserrat, Puerto Rico, the United States, and Uruguay), mortality is higher in the population over age 80 than in other population groups. 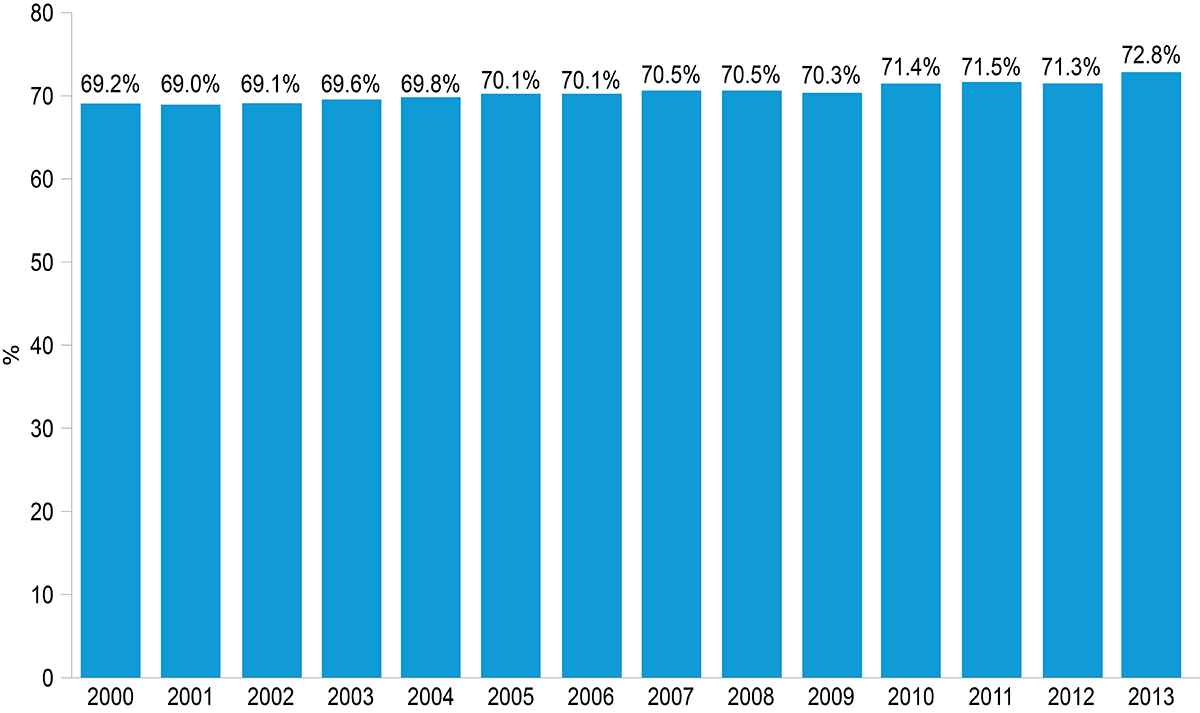 Figure 6. Proportion of deaths by age group and country, Region of the Americas, 2012 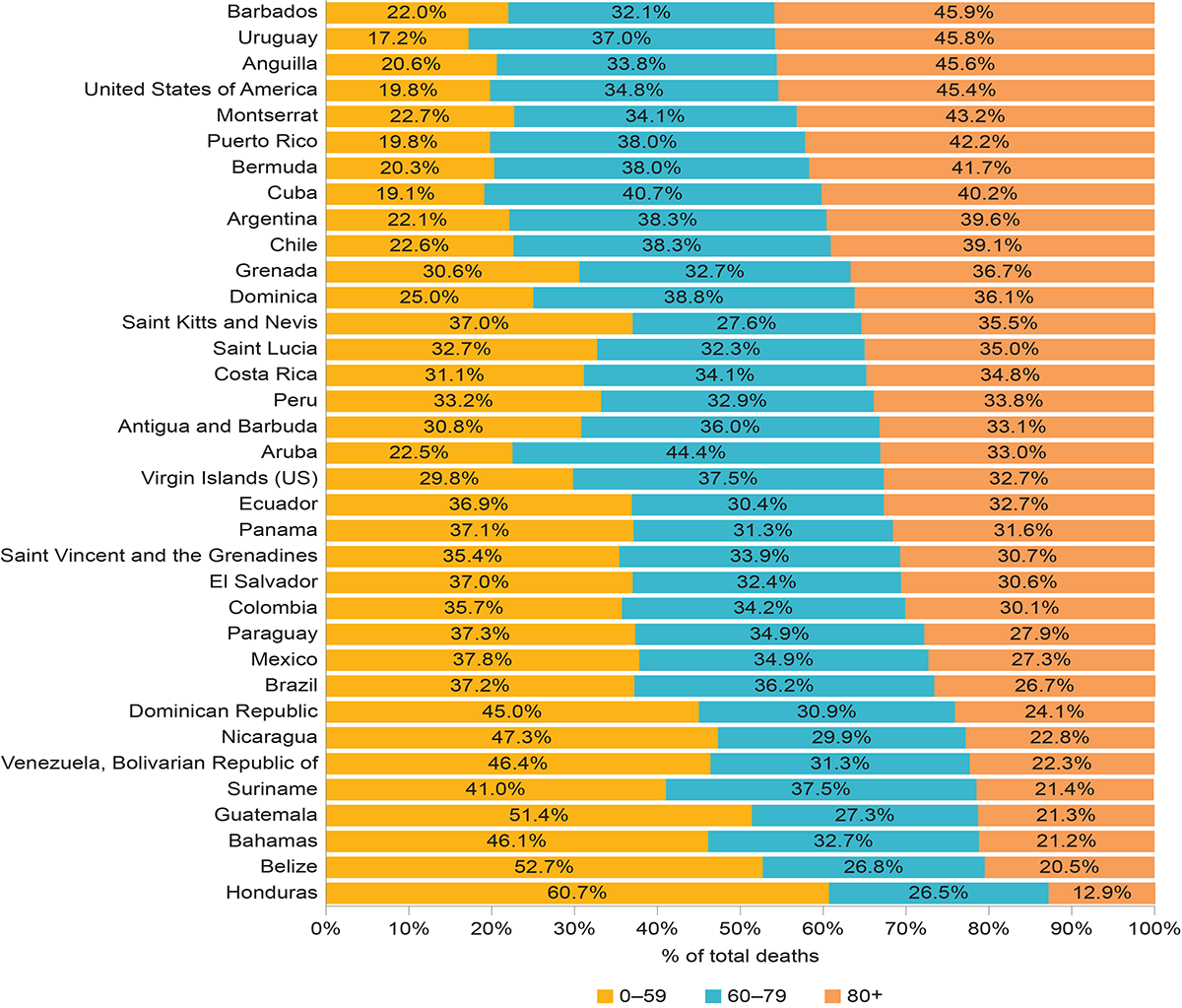 Figure 7. Ten leading causes of mortality in the population age 60 and older, Region of the Americas, 2012 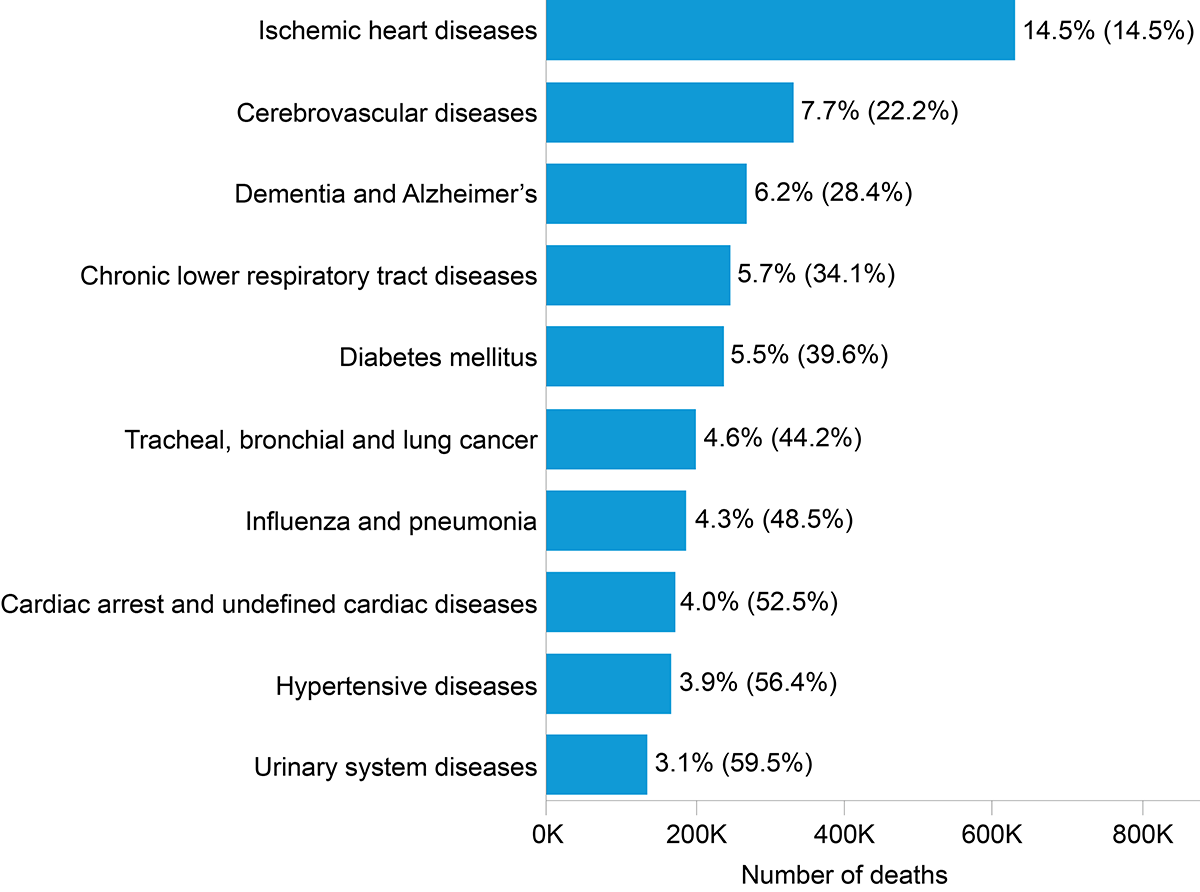 As indicated in Chapters 2 and 4, longer life expectancy does not mean that people are enjoying longer healthy or disability-free life expectancy. In that context, the measurement and use of health-adjusted life expectancy (HALE) is important, which the World Health Organization describes as “the average number of years that a person can expect to live in ‘full health,’ by taking into account the years lived in less than full health conditions due to disease and/or injury” ().

In 2015, HALE in the Region of the Americas was estimated at 65 years, with the number of unhealthy years of life varying from country to country, ranging from 8.3 years in Guyana to 10.9 years in the United States (Figure 8). Canada and Costa Rica have the highest estimated HALE values, at over 70 years of age. In contrast, Haiti and Guyana have a healthy life expectancy under 60 years of age, and countries like the Puerto Rico, United States, and Venezuela lost 10 years of their HALE (see Figure 8). These estimates contribute to the argument that the increase in life expectancy has been accompanied by increased morbidity and especially disability. The population in the Region is living longer, but also living longer with disease, disability, and dependence on the care of others (see Chapter 2). 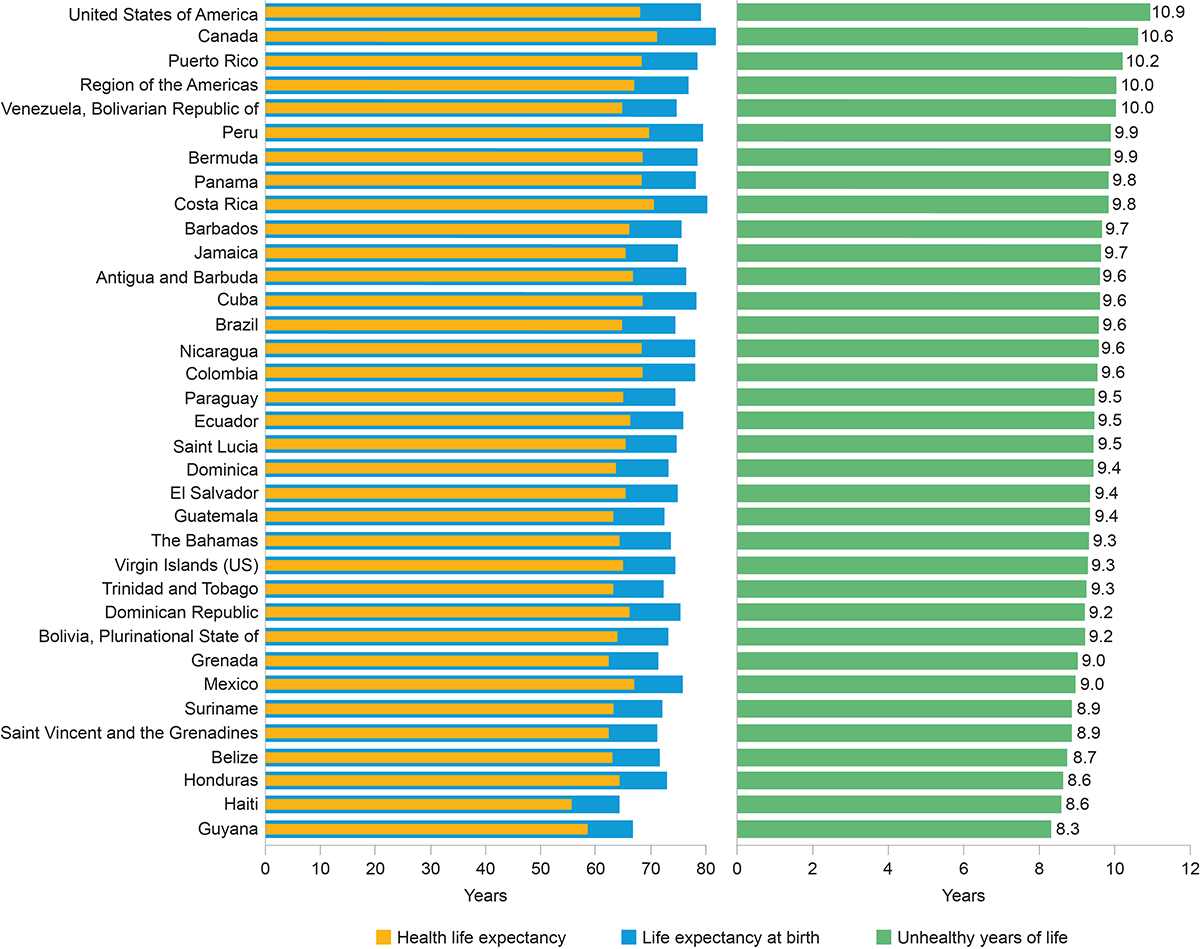 Figure 9. Rate of years lived with disability by age group, Region of the Americas, 2015

Regarding the increase in life expectancy without health and with disability, Figure 9 shows that living with some type of disability becomes more prevalent with increasing age. Figure 9 also shows that the population group over 80 years of age lives most frequently with some type of disability, and thus, clearly illustrates how demand for long-term care in the Region will increase. According to the World Health Organization, in 2020 severe disability will rise 47% in this age group in LAC and 20% in countries such as Canada and the United States (), due to three fundamental causes that often concur: unhealthy lifestyles, disabling conditions, and the fragility associated with aging itself.

As mentioned in Chapter 2, it is essential for the countries of the Region to be aware of available information on aging and health, particularly in order to project and attempt to modulate the impact of aging on health systems. Investment and interventions for healthy aging, defined in the WHO document “Multisectoral action for a life course approach to healthy ageing: draft global strategy and plan of action on ageing and health” () as “the process of developing and maintaining the functional ability that enables well-being in older age” will be fundamental in the health agenda of the Region over the next decade.

11. World Health Organization. Current and future long-term care needs: an analysis based on the 1990 WHO study: the global burden of disease and the international classification of functioning, disability and health. Geneva: WHO; 2002. Available from: http://apps.who.int/iris/bitstream/10665/67349/1/WHO_NMH_CCL_02.2.pdf.