In 2016, the workforce in the Region of the Americas was composed of 661 million people (), of whom 422 million (66%) were in Latin America and the Caribbean (LAC) and 239 million (33%) in North America (not including Mexico). Inequities in conditions of employment and working conditions impact workers’ health, quality of life, and equity, as well as their productivity. Although in 2015 there was a worldwide upward trend in productivity and employment (72%), and precarious work declined in middle-income countries (workers living in homes where each person lives on less than 2 US dollars a day are considered to have precarious work) (), regional and national productivity decreased and there were major inequalities. Since 2013, unemployment rates have increased, rising from 6.6% in 2015 to 8.1% in 2016, the highest in the decade () (Figures 1a and 1b). Growth in LAC has stalled, more so in South America than in Central America and Mexico (). Informal work persists and informal employment has increased (). Vulnerable employment persists in 16 countries in the Region (Figure 2) and 53.8% of non-agricultural workers are in the informal sector (). Gender gaps reflected in employment and participation rates have been reduced, but female unemployment remains high, with higher employment and participation rates for men, and gaps in access to protection and social rights for women, creating further inequities (). Working women also face other problems, including (): (1) segregation in the workplace; (2) lack of opportunities and unstable labor conditions; (3) persistent glass ceilings (barriers that prevent them from rising in the workplace); (4) low pay or no pay; (5) sexual, psychological, or random harassment; and (6) multiple jobs. Poverty limits women’s access to education and to improving their work skills, and on average, women earn 77% of what men earn.

Figure 1a. Latin America and the Caribbean (24 countries): principal labor indicators at the national level, 2006–2016 (percentages) 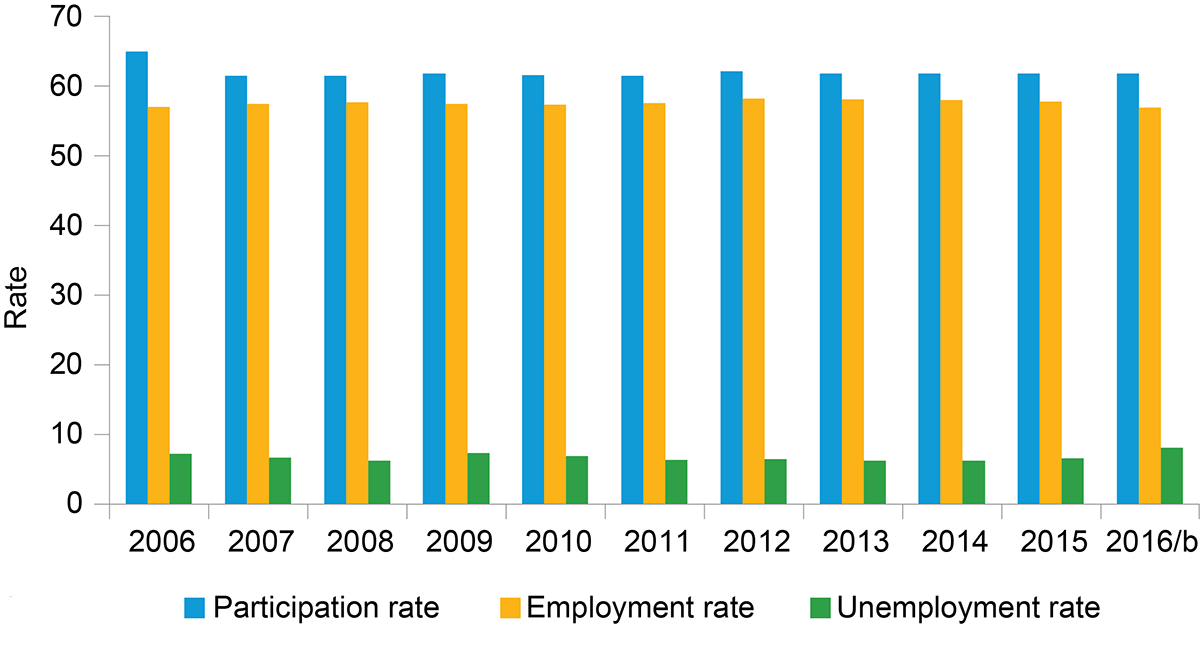 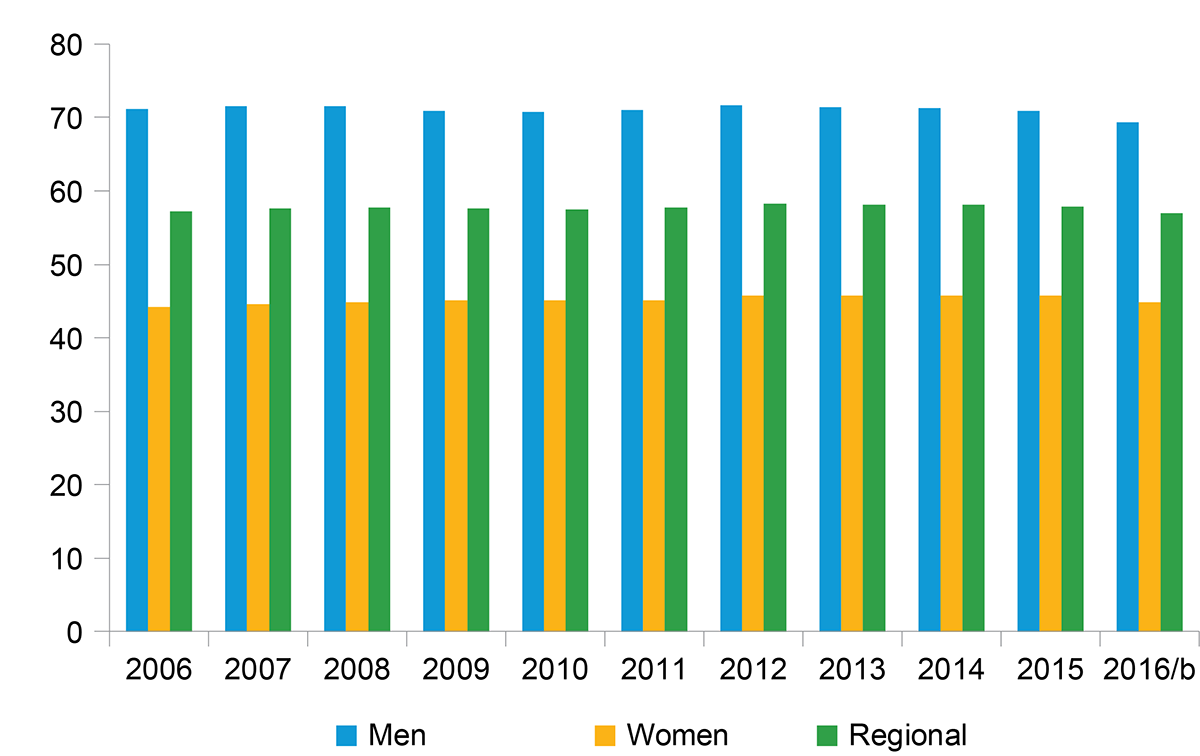 Figure 2. Annual indicators of employment in the informal sector in 16 countries in Latin America and the Caribbean, 2011

Source: Adapted from ILO, Statistical update on employment in the informal economy ().

It is difficult to determine the magnitude of exposure to workplace hazards due to the limited development of occupational hygiene services (). Surveys carried out in some countries on working conditions and health have identified certain patterns of exposure to multiple hazards (chemical, physical, biological, ergonomic, safety, and sanitation), as Figure 3 shows. These exposures could explain patterns in morbidity, accidents, and mortality, although much of the Region lacks official registries of occupational diseases (). This limits preventive interventions while pointing out deficiencies in the systems for surveillance, detection, and reporting of occupational diseases in different countries.

Exposure to workplace hazards underlies the silent global epidemic of occupational diseases: the World Health Organization (WHO) estimates some 140 million new cases every year. In 2013, the International Labour Organization (ILO) estimated that 2.4 million accidents and occupational fatalities occur every year. In 2007, PAHO estimated at least 7.6 million occupational injuries (20,825 a day) in the Region–occurring more frequently in men–causing 11,343 deaths, 5,232 in LAC alone (). Construction, mining, agriculture, and transportation were the economic sectors with the greatest number of fatal injuries (). Available data from selected countries between 2000 and 2010 are shown in Figure 4. These figures do not reflect the complete Regional panorama, due to exclusion of the informal sector and high under-reporting in each country ().

Figure 4. Insured population and occupational injury rate (per 100 workers) in selected countries of the Region of the Americas, 2000–2010 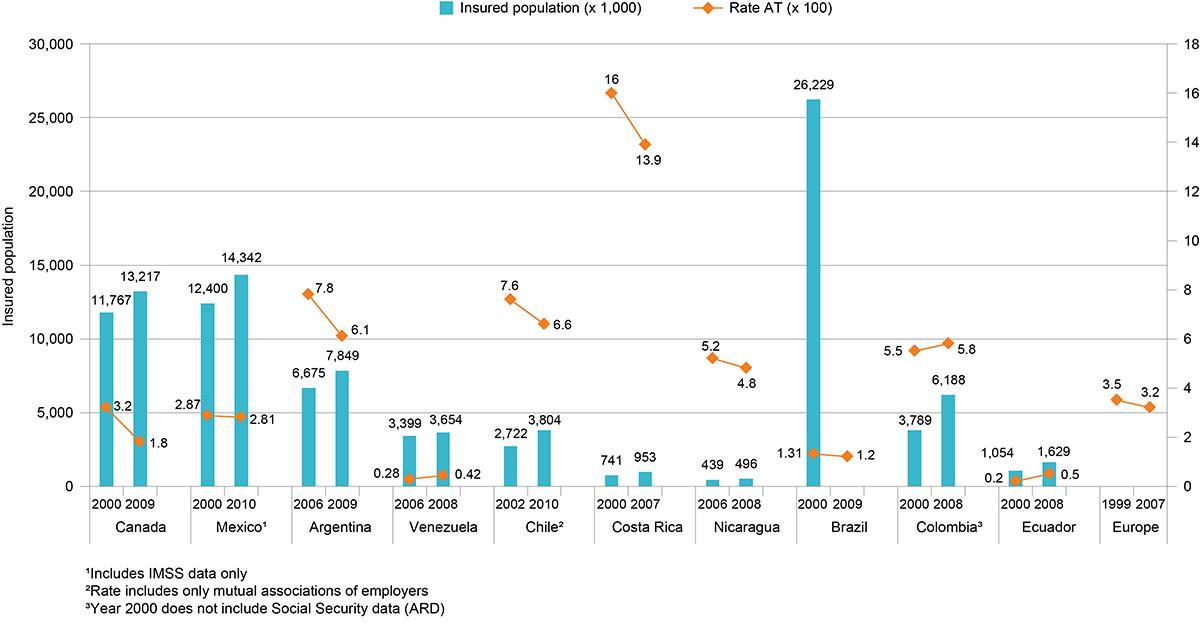 Occupational diseases tend to be underreported due to their long latency and the difficultly in identifying them, and they remain hidden in noncommunicable disease registers. In 2007, a mixed profile of occupational pathologies was recognized, of which only 1–5% are reported (). A comparative estimate was made using results from surveys conducted in five countries among workers formally affiliated with the social security system, and compared with figures for the European Union (Figure 5). This comparison gives an idea of the low level of reporting, due partly to the precariousness of the occupational health and safety services (<30%); the invisibility of the informal sector and rural workers; the exclusion of workers who are not affiliated with the social security and workers' compensation systems; the lack of knowledge on the part of health professionals (especially in LAC); and the deficiencies in terms of information, surveillance, and reporting systems (). As well, the 2013 study of the global burden of disease () showed an increase in the exposure to occupational risks (11th leading cause of deaths among men and 13th among women), increasing the number of years of disability-adjusted life years (DALYs) between 1990 and 2015. Figure 6 shows that occupational risks continued to contribute to DALYs for both sexes and all ages in 2015. Furthermore, the WHO Global Health Observatory () has estimated that occupational risks contribute nearly 15% of the total burden of disease. Table 1 shows the exposures to occupational risks that can contribute to noncommunicable occupational diseases. When exposures are simultaneous, the burden of mortality is even greater, as can be seen in Table 2. The Plan of Action on Workers’ Health 2015-2025, approved in 2015 by the Directing Council of PAHO, addresses both groups of diseases in order to prevent and control them in the workplace.

Figure 5. Occupational diseases (OD) in selected countries of the Region of the Americas, 2000–2009

Table 1. Burden of noncommunicable occupational disease due to dangerous exposures in the workplace, GBD 2004

Table 2. Burden of noncommunicable occupational disease due to dangerous exposures in the workplace, GBD 2004

1. World Health Organization. Closing the gap in a generation: Health equity through action on the social determinants of health. Final report of the Commission on Social Determinants of Health. Geneva: WHO; 2009. Available from: http://www.who.int/social_determinants/final_report/csdh_finalreport_2008.pdf.

6. Economic Commission for Latin America and the Caribbean. Economic survey of Latin America and the Caribbean 2016: the 2030 Agenda for Sustainable Development and the challenges of financing for development. Santiago de Chile: ECLAC; 2016. Available from: http://www.cepal.org/en/publications/40327-economic-survey-latin-america-and-caribbean-2016-2030-agenda-sustainable.