Cholera still persists in the Americas. From 2010 to 2016, cholera was reported in Cuba, Dominican Republic, Haiti, and Mexico (Table 1).

In Haiti, Vibrio cholerae O1 has been present since 2010. Epidemiological peaks are observed during rainy periods due to increased water run-offs, feeding the endemic transmission (Figure 1). The endemic cycle is maintained through the mobility of persons and inadequate hygienic practices. Oral cholera vaccine was introduced in 2015, and approximately 373,000 persons were vaccinated. Even so, sufficient investment in sewage infrastructure is needed to counter the current endemic cholera situation in Haiti. 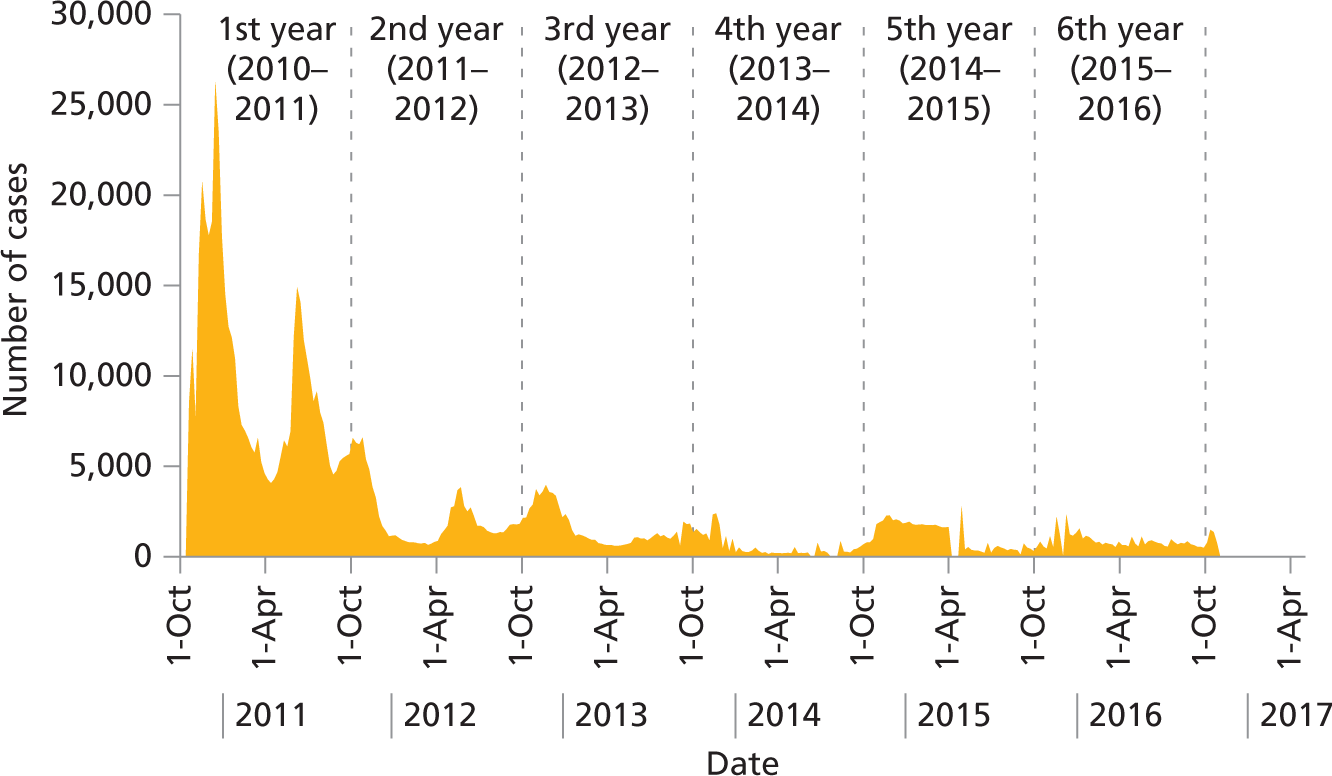 The Dominican Republic and Cuba reported cholera cases related to Haiti’s outbreaks. The differences in terms of health services infrastructure, sanitation conditions, and access to safe water help explain differences in the spread of cholera among these countries. Mexico also had a cholera outbreak related to the Haitian strain between 2012 and 2014 ().

Table 1. Cholera cases by selected countries in the Americas, 2010–2016. Data from PAHO* unless specified in the footnotes below.

From 2012 through 2016, the patterns of influenza circulation varied by year and by subregion (Figure 1).

Figure 1. Influenza circulation by subregion of the Americas, 2012–2016

In North America, where influenza seasons typically peak around the beginning of the calendar year, during the 2012–2013 and 2014–2015 influenza seasons, influenza A(H3) virus predominated. These H3-predominant seasons are typically associated with higher morbidity and mortality, especially among the elderly.

Yellow fever is a vaccine-preventable hemorrhagic fever caused by a single-stranded RNA flavivirus and transmitted by mosquitoes according to two distinct epidemiologic patterns. Aedes aegypti, the same mosquito species responsible for transmission of the dengue, chikungunya, and Zika viruses, also transmits urban yellow fever, the classic epidemic form of the disease. Haemagogus and Sabethes species of mosquitoes, which typically spend their winged lives in forest canopies, can transmit jungle (or sylvatic) yellow fever to nonhuman primates and occasionally to humans, causing sporadic cases that can then reintroduce the disease into urban areas. Jungle yellow fever remains an important health threat in the Region. With the growing influence of climate change, and compounded by humans encroaching on jungle areas, the risk of transmission to humans and thus of occurrence of an urban cycle of yellow fever has become more pronounced. Furthermore, recent outbreaks of Zika virus and chikungunya confirm that the wide distribution and high infestation rates of Aedes aegypti in many highly populated cities are conducive to efficient transmission of Aedes-borne arboviruses. 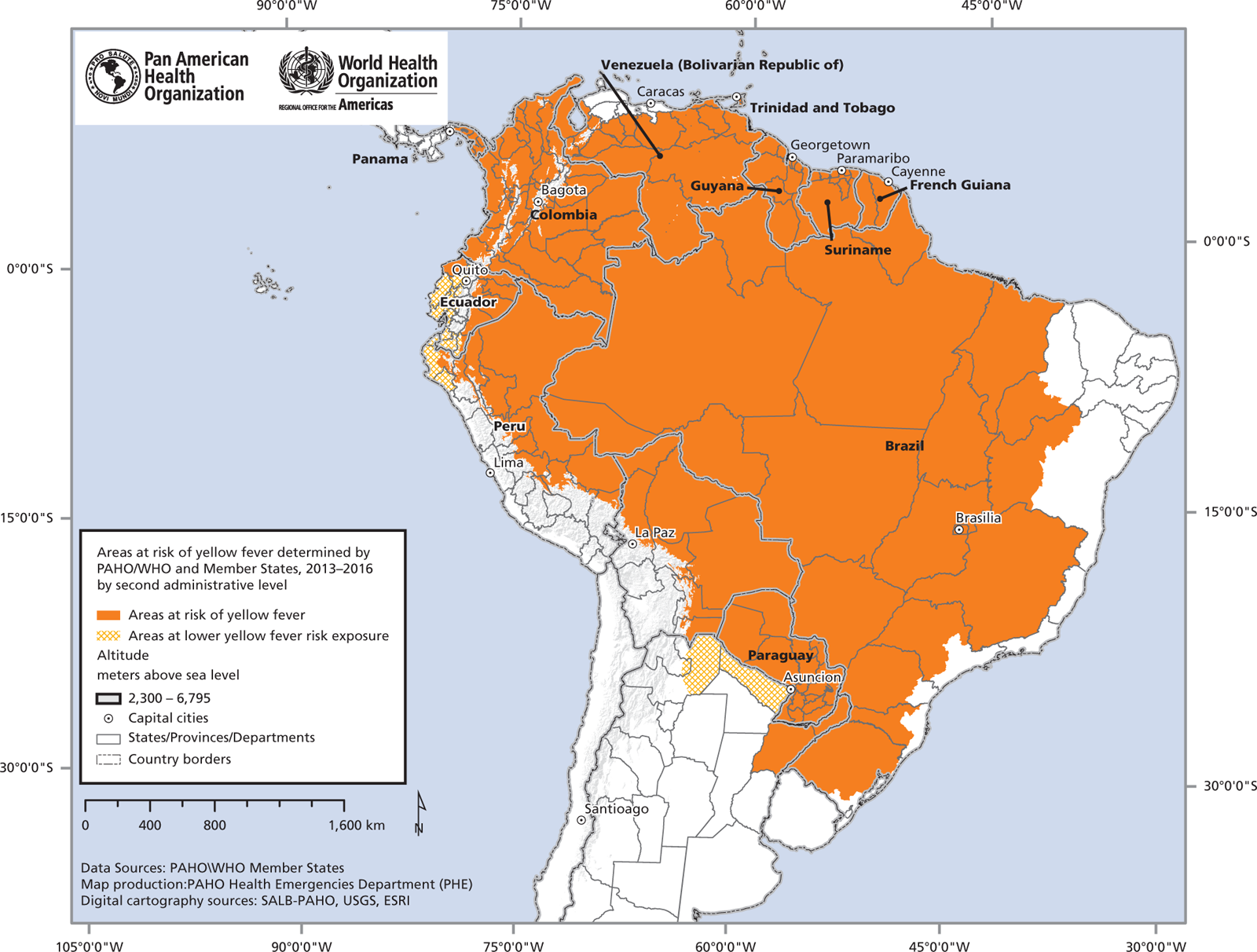 Yellow fever has historically been known to circulate in the Americas in areas of Argentina, Bolivia, Brazil, Colombia, Ecuador, French Guiana, Guyana, Panama, Paraguay, Peru, Suriname, Trinidad and Tobago, and Venezuela. However, the range of the virus continues to expand (Figure 1). From 2010 to 2016, 269 confirmed cases of yellow fever were reported to the Pan American Health Organization (Figure 2), with an average of 48 cases per year (). 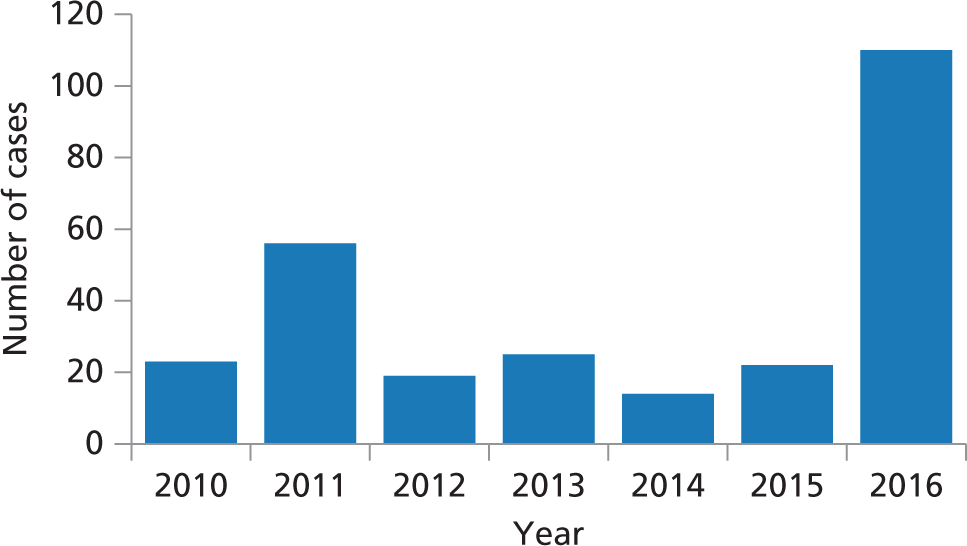 Brazil reported an outbreak of yellow fever at the end of 2016. Between 1 December 2016 and 17 March 2017, a total of 448 confirmed yellow fever cases had been reported, including 144 confirmed deaths (for a case fatality rate of 32%). The outbreak has affected the following eight Brazilian states: Bahia, Espírito Santo, Goias, Minas Gerais, Rio Grande do Norte, Rio de Janeiro, São Paulo, and Tocantins ().

In the 21st century, infectious diseases continue to cause morbidity and mortality in the Region of the Americas. While the development of antimicrobial resistance by microbes (bacteria, viruses, parasites, fungi) is not a new phenomenon, the awareness of its importance, not only for health but also for the economy and human development, has recently reached an unprecedented level. At the 69th United Nations General Assembly, held in September 2016, world leaders committed to acting on antimicrobial resistance, calling for a multisectoral response and appealing to organizations such as the World Health Organization (WHO), the Food and Agriculture Organization of the United Nations (FAO),and the World Organization for Animal Health (OIE), along with other stakeholders such as multilateral development banks and civil society, to use the “One Health” approach in responding to antimicrobial resistance (). In efforts to meet the commitment made during the 69th United Nations General Assembly, five of the Region’s countries are in the process of preparing and implementing national and multisectoral plans to respond to and contain antimicrobial resistance.

For more than two decades, Latin America has employed the Latin American Surveillance Network of Antimicrobial Resistance (ReLAVRA). From 1996 to the present, a growing trend of resistance among the principal human pathogens, including community and hospital pathogens (pneumococci, gonococci, Staphilococcus aureus, and enterobacteria), has been documented (). Some countries in the Region are organizing programs for integrated monitoring of antimicrobial resistance in order to follow the evolution of antimicrobial resistance and propose measures to limit its growth. This effort is being supported by ReLAVRA, the Global Foodborne Infections Network (WHO-GFN), and the Pulsenet Latin America and Caribbean network. The purpose of these programs is to generate descriptive data and identify trends regarding patterns of sensitivity or resistance in zoonotic pathogens, foodborne pathogens, and a select group of commensal organisms in order to identify unusual or high levels of resistance to antimicrobial drugs in humans, animals, and foods containing these organisms.

Surveillance systems have made it possible to document the spread of emerging mechanisms of resistance in the Region. Between 2011 and 2016, KPC-type carbapenemas spread in almost all of the countries of Latin America. This mechanism causes high case fatality (up to 50%) in outbreaks at intensive care units (). Evidence has also been found of the presence and spread of other emerging mechanisms of resistance in enterobacteria (such as OXA-type carbapenemases, NDM-1 New Delhi metallo-beta-lactamases, and resistance to colistin mediated by plasmids [mcr-1]) (Figure 1).

Figure 1. Identification of emerging resistance mechanisms in enterobacteria, Region of the Americas, 2000–2016 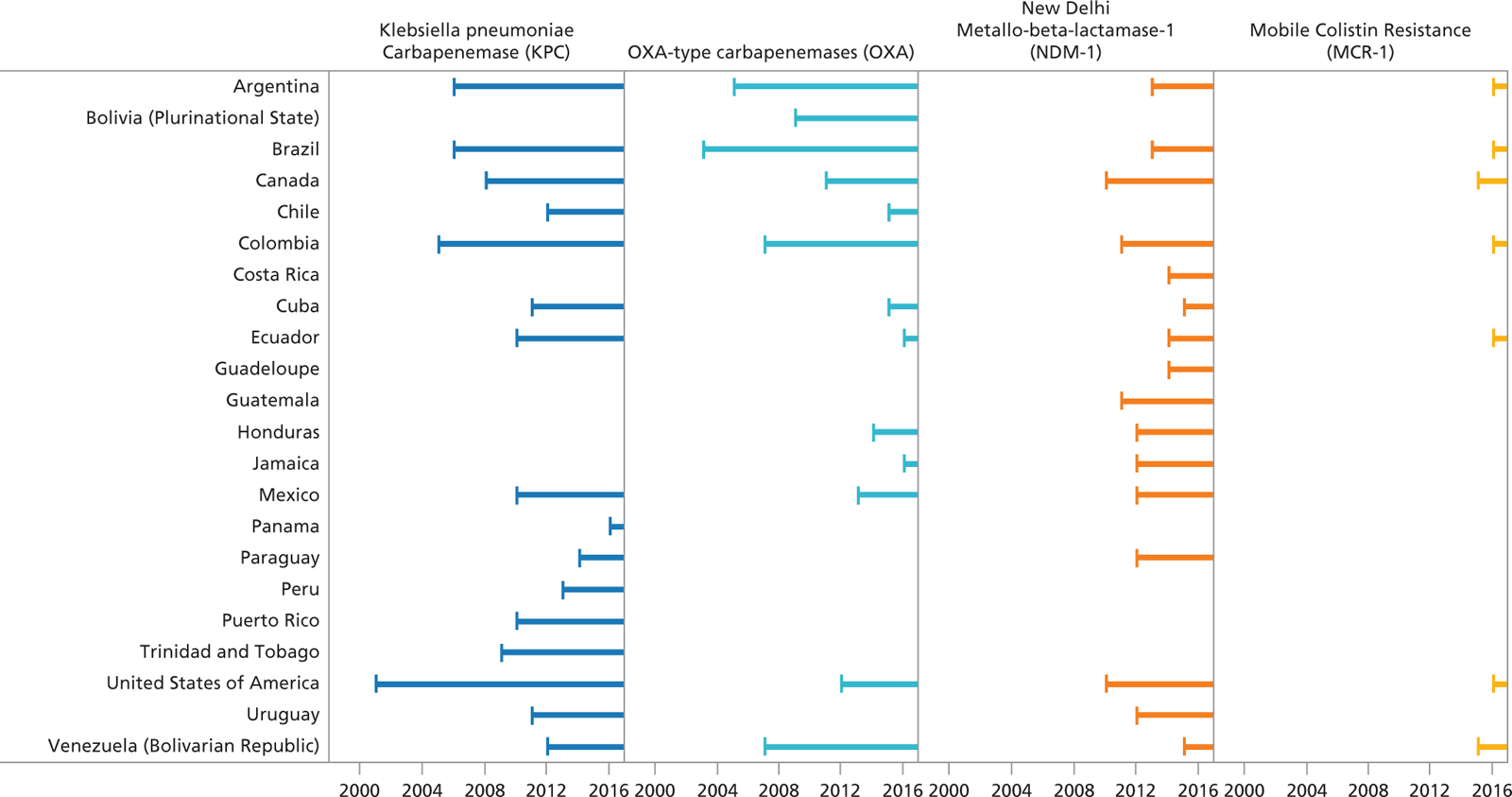 Source: Data compiled from various sources by the Communicable Diseases and Health Analysis Department of the Pan American Health Organization.

Multiresistant fungi can also cause hospital outbreaks. Since 2012, Candida auris outbreaks caused by Candida have been reported in intensive care units in Venezuela, Colombia, Panama, and the United States (). Case fatality in these outbreaks can reach 30%. The correct and timely detection of C. auris is essential as the organism is often confused with other species (e.g., C. haemulonii).

The road ahead: the molecular epidemiology of resistance

Molecular epidemiology makes it possible to recognize genetic characteristics of microorganisms, which assists in ascertaining patterns of clonal dissemination and in identifying emerging resistance mechanisms. In recent decades, the technology required to conduct regional studies in molecular epidemiology has become increasingly accessible. In 2016, an initial extensive study of mechanisms of resistance to fluoroquinolones in Salmonella enterica was conducted. The study examined the regional situation regarding mutations in DNA gyrase – the most important mechanism of resistance to fluoroquinolones in the Region – as well as indicating the presence of mechanisms mediated by plasmids.

As a result of molecular studies, the presence of the mcr-1 gene (which provides resistance to colistin) has been detected in isolations of Escherichia coli from Argentina, Colombia, Ecuador, and the United States. These findings underline the importance of integrated monitoring of resistance, since the use of colistin in veterinary medicine selects for this gene. Coordination between the human and animal health sectors is key to preventing and controlling transferable colistin resistance in microorganisms ().

In implementing national plans to address antimicrobial resistance, countries should adopt actions consistent with, and realistic within, the context of national circumstances, needs, and priorities. The goal is to ensure that there exists the capacity to treat and prevent infectious diseases through the responsible and rational use of effective, safe, available, accessible, and quality-assured drugs.

Table 1. Global impact of natural disasters on health and impact on the Region of the Americas, 2010–2016

Source: Adapted from EM-DAT. Database of the Center for Research on the Epidemiology of Disasters (CRED) ().

Earthquakes in Haiti and Chile in 2010 and in Ecuador in 2016 caused significant damage to the health sector, particularly infrastructure, leading to a reduced capacity to provide effective care for the population.

Nearly 30 of Haiti’s 49 hospitals collapsed or were damaged, representing losses of around US$ 470 million; 90% of primary health care facilities remained standing or were less severely affected ().

In Chile, there was a loss of 4,249 hospital beds, including 22% of the total available beds at affected health care facilities in the Bío Bío, Metropolitan, and Maule regions. In addition, 39% of the operating rooms in the affected area were compromised. The greatest impact was in the Araucanía, Maule, and Bío Bío regions (). Damages in the health sector have been estimated at US$ 2.72 billion ().

In Ecuador, the earthquake of 16 April 2016 rendered 48 health care facilities inoperative, including 12 health care centers, 6 clinics, and 3 general hospitals. A total of 537 hospital beds were removed from operation, representing 29% of the available beds at in-patient facilities. The Government of Ecuador calculated the cost of reconstruction in the health sector at US$ 177.9 million.

Since the greatest effect of the damage to hospital infrastructure has been a reduction in the capacity to save lives, the ongoing challenge is to ensure that hospitals are equipped to continue functioning in the wake of an adverse event. Programs promoting hospitals that are safe, “smart,” and environmentally friendly exemplify the best available strategies for responding to the challenges posed by emergencies, disasters, and outbreaks or epidemics, by maintaining response capacity and ensuring timely health care.

At the same time, health systems that are more capable of withstanding emergencies and disasters must be created, and the internal response capacities of the countries must be strengthened, along with the capacity for coordination and cooperation between countries.

10. EM-DAT. The International Database of the Centre for Research on the Epidemiology of Disasters (CRED) [Internet]. Available from: http://www.emdat.be/database.