Netherlands Municipalities in the Americas

The islands of Bonaire, St. Eustatius, and Saba became special municipalities of The Netherlands on October 10, 2010, transferring the public administration responsibilities from the Government of the Netherlands Antilles to The Netherlands. As a result of this change, residents gained access to a universal health care insurance system, improved health care and education, social housing for low-income residents, and improved access to clean drinking water. Many of these benefits have already been realized ().

Health care policy for Bonaire, St. Eustatius, and Saba is set by the Ministry of Health, Welfare, and Sport. All legal residents have access to mandatory general health insurance, which took effect on January 1, 2011, replacing all existing regulations and private insurance. This insurance scheme, known as ZVK, replaced the AVBZ insurance scheme and provides medical coverage and long-term care, including care by general practitioners and specialists; hospital, paramedical, maternal and obstetrics, pharmaceutical, and dental care; and patient transportation. Long-term care, including home care, is available for the elderly and for persons with disabilities. If specialized care is unavailable in the municipalities, transportation is provided to take patients to Colombia.

Total health care costs in Bonaire, St. Eustatius, and Saba amounted to an estimated US $102 million in 2012. Per capita health care expenses were US $4,834 in 2012. The ZVK is funded through personal income tax (roughly US$ 65 million) and premiums paid by employers (roughly US$ 37 million) (). The Dutch government finances all deficits, as outlined in the Insurance Decree BES, 2010.

Other health policy measures also have been put in place since the change in status. For example, in an attempt to detect rare conditions, heel-prick screening was implemented for newborns in Bonaire January 1, 2015, and in St. Eustatius and Saba on October 26, 2015. The blood samples are sent to The Netherlands for screening for 17 disorders. In addition, the Dutch Parliament granted an increase in the length of maternity leave in all three islands from 12 to 16 weeks.

Located 70 km off the coast of Venezuela, the island of Bonaire has an area of 288 km2, a population of 19,400 residents, and a population density of 67 people per km2. 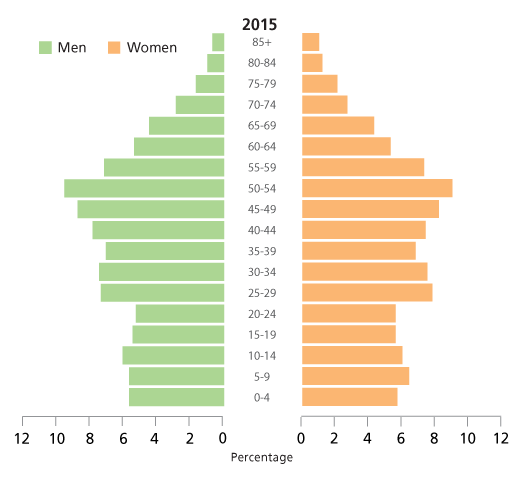 As of January 1, 2016, 37% of residents were born in Bonaire, 18% were born in Curaçao, and 2% were born in Aruba; 14% came from the Dutch mainland, and 18% from Latin America. Two-thirds of the population speaks Papiamento, and only 15% speak Dutch as a native tongue.

Both the average and median disposable income for private households have gradually increased since 2011. Both increased 4% between 2012 and 2014. In 2014, the average disposable income of private households reached US$ 30,700, and the median income reached US$ 23,400. Statistics Netherlands (the Dutch Central Bureau of Statistics) reported that as of January 1, 2013, life expectancy in Bonaire, St. Eustatius, and Saba was 80.2 years.

Economic growth in 2014 was 1.6%, with the country’s GDP estimated at US$ 403 million. Government and real estate activity were the main drivers of growth, and respectively contributed 17.5% and 17.9% to GDP. The financial services sector added 10.4% of value to the island’s economy, and tourism has traditionally contributed around 16%. Direct tourism spending brings US$ 160 million into the island’s economy, with an estimated value-added of US$ 60 million for the sector (). Inflation in Bonaire remained low in 2016, at 0.5%, after registering deflation of -0.9% the prior year. A drop in electricity prices late in the year helped to offset the rise in oil prices ().

Its tropical climate exposes Bonaire to risks of mosquito-borne diseases. A report from the National Institute for Public Health and the Environment of the Netherlands for epidemiological week 44 in 2016 (October 31 November 6) confirmed 60 Zika virus infections since monitoring began the week of November 23, 2015; no cases were reported among pregnant women. Between November 23, 2015, and November 6, 2016, 45 probable and confirmed cases of dengue were reported in Bonaire, 22 in women and 23 in men. For the same period, 37 probable and confirmed cases of chikungunya were reported, 23 in women and 14 in men ().

The municipality of St. Eustatius is located in the Leeward Islands in the Caribbean Sea, between St. Kitts and Anguilla. It extends for 21 km2 and has a population of 3,200 inhabitants, with a population density of 152 persons per km2 (). In terms of provenance, 34% of residents were born on the island, 11% were born in Sint Maarten, 6% in the Dutch mainland, and 9% in Curaçao or Aruba; 79% of the population holds Dutch nationality. Most of the population (68%) is multilingual: 85% speaks English as a first language, 6% speaks Dutch, and 7% speaks Spanish. Figure 2 shows St. Eustatius’ population structure in 2016. 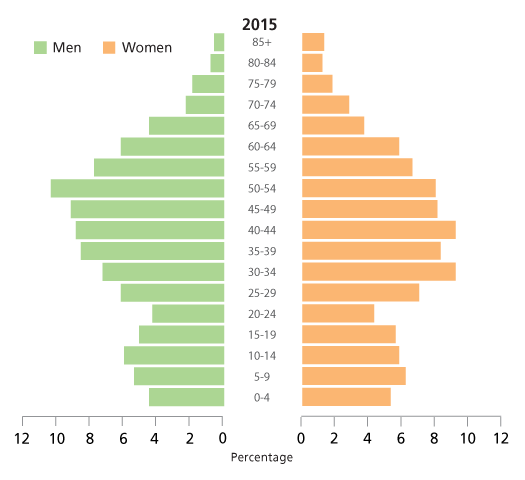 A deflationary price environment persisted in St. Eustatius in 2016, with prices declining 0.1% for the year. The drop was mainly the result of a 20% increase in electricity prices in 2015, which manifested itself as a drop in 2016. Food products and gasoline prices increased late in the year, contributing to inflation ().

Most (71.7%) of the population had visited a general practitioner in the year prior to the survey, and just under half (47.6%) had contacted a specialist. Half of residents had visited a dentist at least once in the past year ().

Its tropical climate exposes St. Eustatius to risks of mosquito-borne diseases. A report from the National Institute for Public Health and the Environment (31 October 6 November 2016) confirmed 16 Zika virus infections since it began measuring on November 23, 2015. No cases were reported among pregnant women ().

Saba, located in the Leeward Islands, has a population of nearly 2,000 inhabitants. The island stretches for 13 km2 and has a population density of 150 persons per km2 (). The population grew 5% between 2014 and 2016, increasing by 136 people. The population is evenly distributed between males and females. Most (53%) of households are single-person and 20% are couples without children. Figure 3 shows Saba’s population structure in 2016. 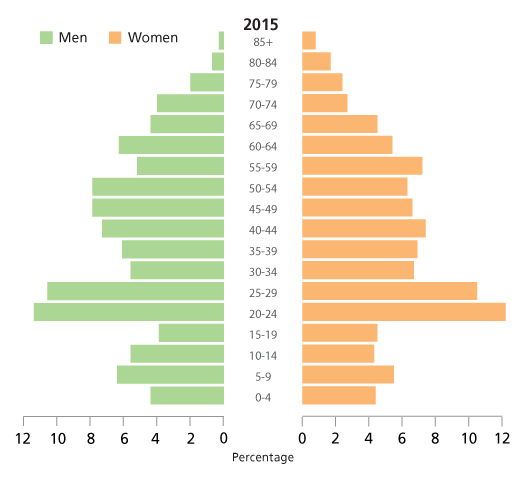 The working-age population (15-74 years old) in 2014 was 1,520, with 900 people employed. The unemployment rate was 2.5%. Labor force participation is notably low at 59.3%, and 35% of inhabitants are not looking for a job or are not available for work. This is largely related to the number of medical students living on the island, few of which have a part-time job and many of which, being foreigners, lack work permits. Over 24% of the population is not seeking employment or cannot work because of their level of education.

Only 28% of residents were born in Saba, and 26% were born elsewhere in The Netherlands or the former Netherlands Antilles; the remaining 46% were mostly born in Canada, the Dominican Republic, or the United States. People of Dutch nationality employed on the island largely work in the hotel and catering industry, in education, or for the government, and tend to have attained secondary or higher levels of education.

There is one primary and one secondary government-funded school on the island; 248 students attended these schools in the academic year 2015-2016, only 6 of whom were enrolled in vocational education. Government-funded schools located on Saba reach the secondary education level. The university on the island is the Saba University School of Medicine, which offers a basic sciences curriculum of 10 semesters.

On average, households had US$ 25,300 in disposable income in 2014, an increase of US$ 1,500 over the previous year. Households in which the primary income-earner was between 40 and 60 years old had the highest income, benefitting from more work experience and access to better jobs. This category had a median disposable income of US$ 29,100, an annual gain of US$ 2,000. The median income at retirement age 60 years and older was US$ 21,200.

Saba’s economic drivers are tourism, the Saba Medical University School, and fisheries. The economy posted growth in 2015, on the back of solid performance from all three of these sectors. Infrastructure investments executed in 2015 included work at the airport, the harbor, and the electricity plant. Inflation rose in the third quarter of 2016, to 0.2%, mainly resulting from the price of toiletries and natural gas. Food prices declined 1.6% annually, driven by the cost of fresh produce, milk, and sugar (). The minimum wage was increased 6.5% on January 1, 2016, and is due to be increased again on January 1, 2017.

There are several projects aimed at improving Saba’s water supply. New cisterns under construction will help the municipality better cope with drought; in 2013 water had to be brought in by the Dutch Navy to contend with a drinking water shortage due to drought and malfunctions at the water plant (). A new pipe system connecting Fort Bay to The Bottom will improve water delivery, and a bottling facility for drinking water is in under study.

Statistics Netherlands reports life expectancy at birth at 80.2 years. Statistics Netherlands also reported that 80% of residents in 2014 rated their health as “good” or “very good.” In terms of nutritional conditions, 30% of the residents were moderately overweight and 33% were obese. Half of the inhabitants had visited their dentist in the last year. The same studies reported that 7.7% of the population suffers from diabetes, with a higher rate among women (10.1%); 15.4% of the population reported that in the prior 12 months they had suffered from high blood pressure (15.2% of men and 15.5% of women); and 62.2% of the population reported having no disorders (68.9% of men and 55.4% of women). Most (72%) of the population had consulted a general practitioner in the prior year; 32.9% had consulted a specialist ().

Its tropical climate exposes Saba to risks of mosquito-borne diseases. Reports (31 October to 6 November 2016) from the National Institute for Public Health and the Environment confirmed 10 Zika virus infections since measurements began on November 23, 2015; no cases were reported among pregnant women ().

1. Ministry of the Interior and Kingdom Relations (Netherlands). Caribbean parts of the Kingdom: Bonaire, St Eustatius and Saba [Internet]. The Hague: BZK; 2016. Available from: https://www.government.nl/topics/caribbean-parts-of-the-kingdom/contents/bonaire-st-eustatius-and-saba.