Washington, D.C., February 23, 2010 (PAHO) - Ricardo Montaner, the South American singer-songwriter who has sold more than 25 million records, was named a Champion of Health today by the Pan American Health Organization (PAHO), for his support of vaccination initiatives in the Americas.

In accepting the honor during a ceremony at PAHO headquarters, Montaner joined a series of artists and celebrities who have been recognized by PAHO/WHO for participating in and supporting health campaigns in the Americas.

In receiving his award, Montaner said that being a PAHO Champion of Health will allow him to keep being active every day, touching people's hearts. He said that traveling throughout the Americas as a participant in Vaccination Week has given him the chance to knock on the doors of entire communities, who have responded to PAHO's call to protect their families through vaccination. 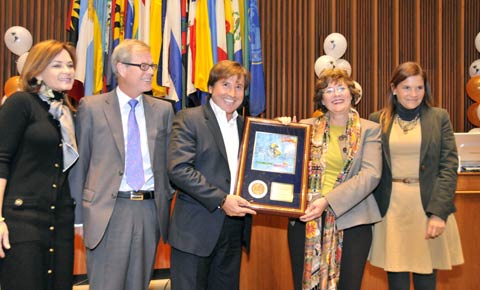 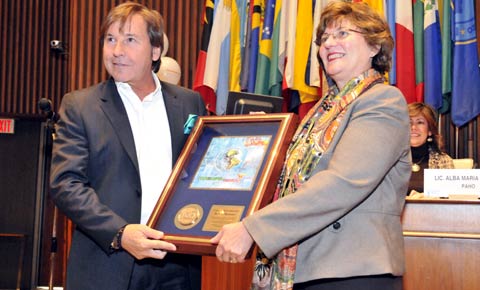 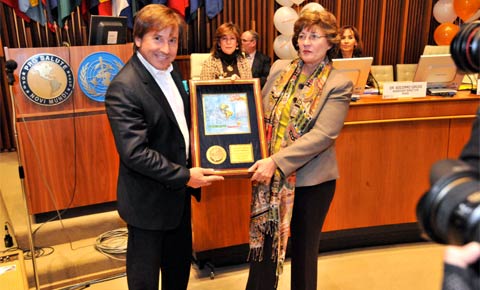 PAHO Director Dr. Mirta Roses, in presenting the award, praised Montaner for his support of PAHO vaccination campaigns. He is an enormous boost for the organization. On the one hand, he's inspiring, and that improves our action. On the other hand, he helps focus a lot of attention on our action. Sharing the spotlight with someone like Ricardo Montaner is invaluable. That's why it is an honor and a privilege for us that he has agreed to serve as a Champion of Health this year.

Also participating in today's ceremony was Nils Kastberg, UNICEF representative for Sudan and formerly regional UNICEF director for Latin America and the Caribbean. Kastberg praised Montaner for his work on behalf of children with special needs and congratulated PAHO for spearheading Vaccination Week in the Americas as a way to take the benefits of vaccination to populations that lack access to routine health services and that are at higher risk of preventable diseases.

In today's ceremony, Montaner concluded his remarks with an a capella rendition of Soy feliz (I'm happy) and proposed that it be the song for this year's Vaccination Week in the Americas.

In his nearly three-decade career, Ricardo Montaner has won many international awards and has also become known for his philanthropic work. His foundation, La Ventana de los Cielos (Window to the Heavens), provides free medical care to children with special needs in Rosario, Argentina, and Miami, Florida. Montaner is also a UNICEF Goodwill Ambassador.