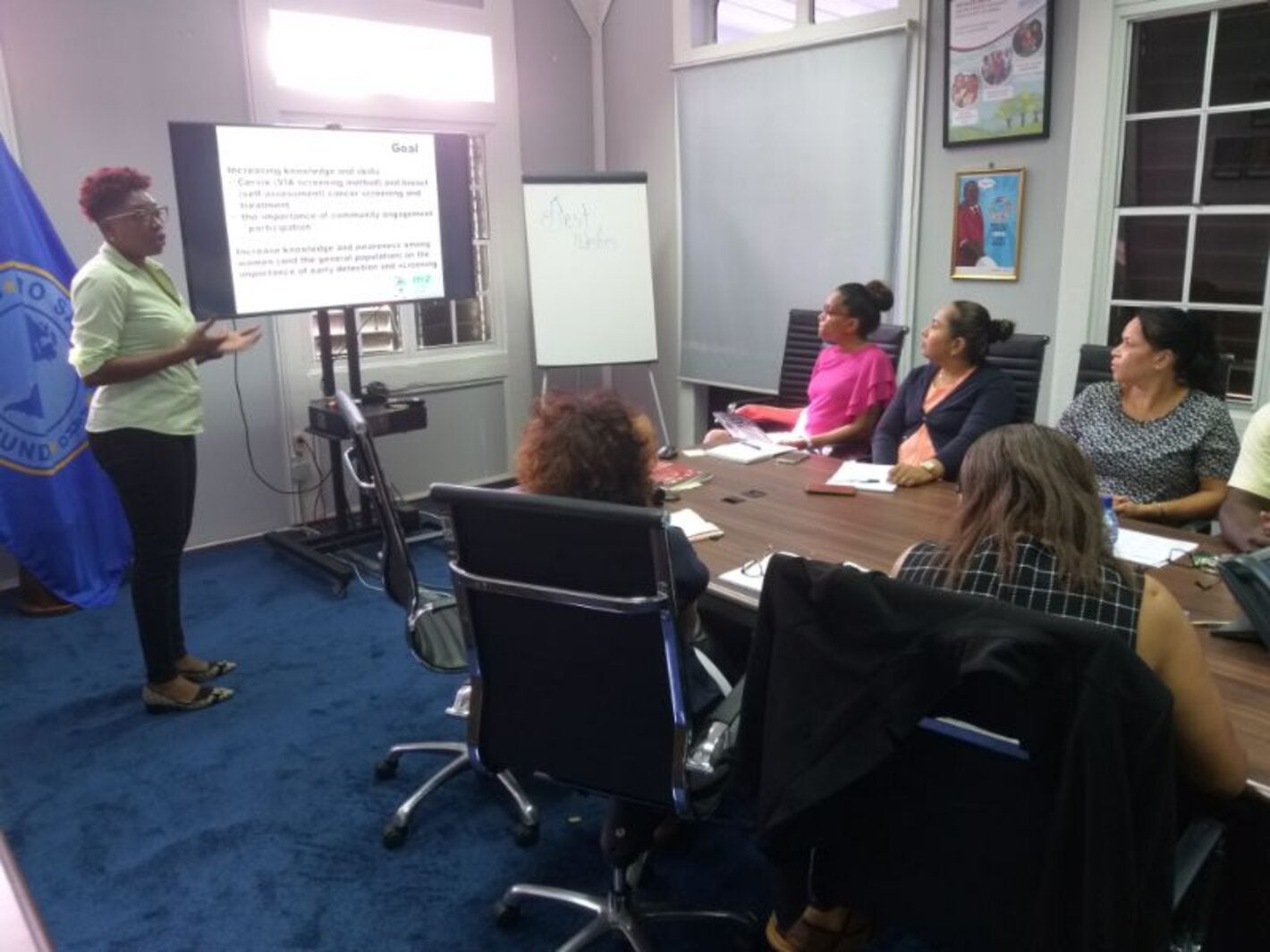 PAHO/WHO for Suriname, 11 February 2020 - Cancer is one of the major causes of death in Suriname. Cervical cancer ranks fourth among the  most common cancer affecting women globally while in Suriname, it ranks second. Every year there are 60 to 70 new cases. In terms of mortality, there are 20 – 25 deaths annually, despite all the available technology for early detection, screening and treatment.  According to the National Cancer Control Plan (2019-2018) the incidence of cancer in Suriname has doubled since the period 1980-2000, when an average incidence rate of 70 per 100,000 population was reported. The most common cancer types in period 2013-2014 were breast (18% of all cases), prostate (12%), colorectal (11%) and cervical cancer (10%).

PAHO and the Ministry of Health called a meeting on the 16th of January 2020 of two organizations – the Stichting Lobi (Love Foundation)  and Medische Zending (Medical Mission) – to discuss their experiences in implementing breast and cervical cancer programs in the communities of Paramaribo and the rural interior of Suriname. These programs were supported by PAHO in 2019. The purpose of the meeting was to have a broader discussion with key stakeholders as well as the leadership of the MOH. The two NGOs initiated their projects, presented the results and shared the lessons learnt. They discussed their challenges and progress concerning cervical and breast cancer screening, control, prevention and treatment in Suriname and how they can jointly tackle the problem as much as possible.

During a presentation from Stichting Lobi, the issue of the mortality rate due to cervical cancer was highlighted.  “This is quite a high mortality rate…,” said Nensy Bandoe, Executive Director of Stichting Lobi  “and the Cancer Control Plan explains that the high mortality rate is caused by the fact that women  present themselves in the health system,  with an advanced disease (80%). The question is why are they coming in an advanced stage. The other issue is if we have more than 40 years’ experience with cervical cancer screening in in Paramaribo and outreach in all the districts, why is there a problem with the access to these resources.” According to Bandoe the main issue lies in the fact that there is no national program for cervical cancer.

Increase of Knowledge and Awareness

Janice Robinson, Coordinator health promotion at Medical Mission talked about Phase 2 of their project on the increase of knowledge and awareness about cervical and breast cancer screening in the Upper Amerindian region of Kwamalasemutu. Phase 1 of the project was in 2018 in the Upper Suriname Region at the location Dyumu and phase 3 will be done this year in the East Suriname Region at the Maroon village Drietabbetje or the administrative center Stoelmanseiland.

Phase 2 was focused on increasing the knowledge and skills of health assistants in the Medical Mission to introduce to their clients the need for screening and to facilitate broader acceptance among community members. From September – December 2019 Health assistants in the upper Amerindian region were trained in screening methods, breast self-assessment, prevention and early treatment of breast cancer, including the ability to see the importance of community engagement in creating awareness of breast cancer.

“We had meetings with women from the community and that was very eye-opening for our health assistants, because the women were willing to talk about their experiences, also with cancer. We had one woman who was treated for cervical cancer said her husband is still waiting for her to die.” Robinson said.

During the discussions which followed, there was general recognition of the need to fully involve men in future programs on awareness and education about cervical and breast cancer.