We have adopted the slogan "Share life, give blood", to draw attention to the roles that voluntary donation systems play in encouraging people to care for one another and promote community cohesion. In this section there are stories about blood donation that focus attention on blood services as a community service, and the importance of community participation for a sufficient, safe and sustainable blood supply. 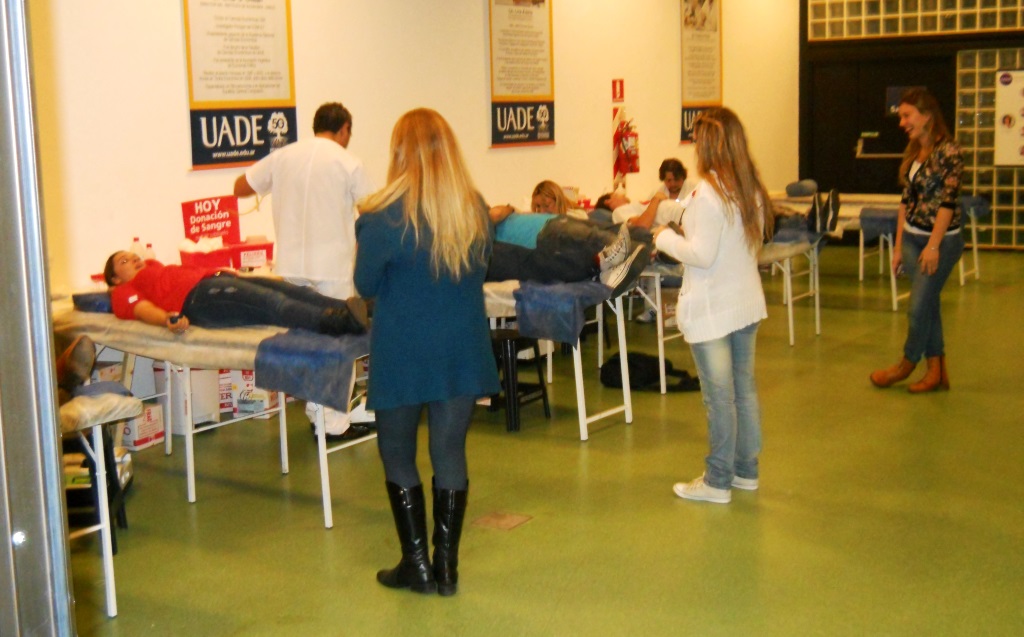 June, 2016. Blood drives and voluntary blood donation campaigns have taken place in Universidad Argentina de la Empresa (UADE) since 2005 to date. During the campaigns, the National Bone Marrow Registry (an organization that operates within the Instituto Nacional Central Único Coordinador de Ablación e Implante -INCUCAI) incorporates voluntary donors into their database. Furthermore, in order to obtain voluntary blood donors and donors for the National Bone Marrow Registry, UADE gather together all the community: students, graduates, teachers, employees and the general public through various communication actions. The University also responds to concerns of potential donors through prior consultation channels like nursing and stands. On the one hand, the Hospitals and Centers movilize technical resources to carry out the blood drives, and on the other hand the university offers its facilities, resources, snacks and assistance to both the healthcare professionals and the bood donors. It is important to highlight the permanent presence of university volunteers teams (formed by students who attend the campaigns). (Credit Photos: UADE)

Voluntary Blood Donation Campaign with the Police in Costa Rica. 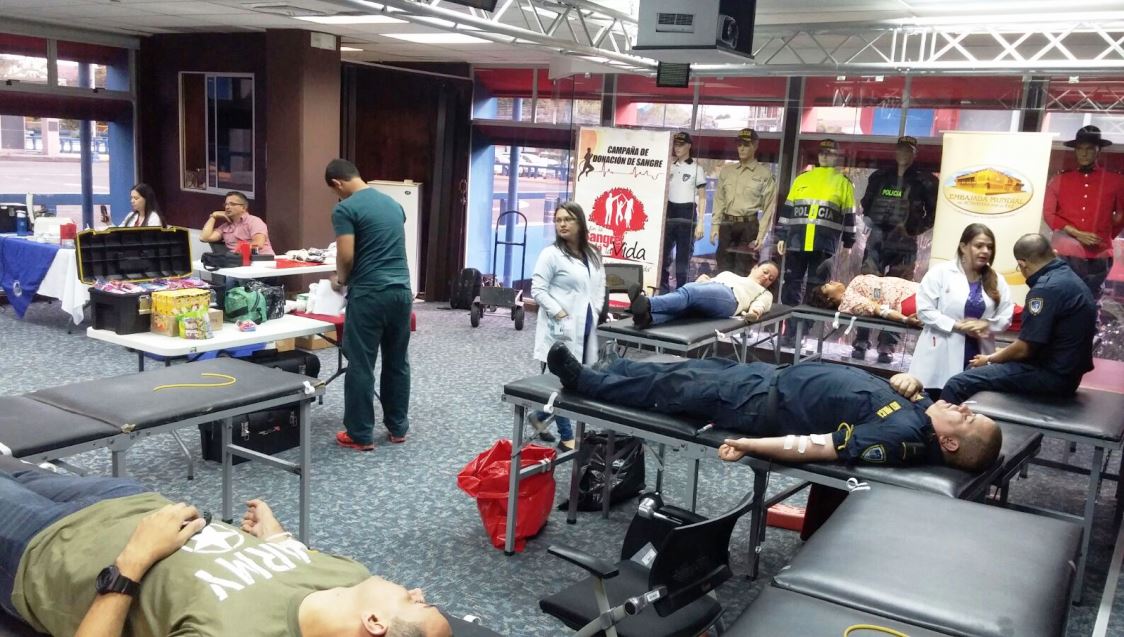 June, 2016. On the 20th and 21st of December 2015, The National Blood Bank, the Ministry of Public Health and the Global Embassy of Activists for Peace conducted a campaign of voluntary blood donation. The campaign consisted of a previous session of talks on the importance of blood donation, and the day after a blood drive took place in the facilities of the police station. In total, more than 200 people participated in this initiative.

Suriname. Launching of a periodic external blood collection site for Libi Makandra Lelydorp from May 21st 2016. 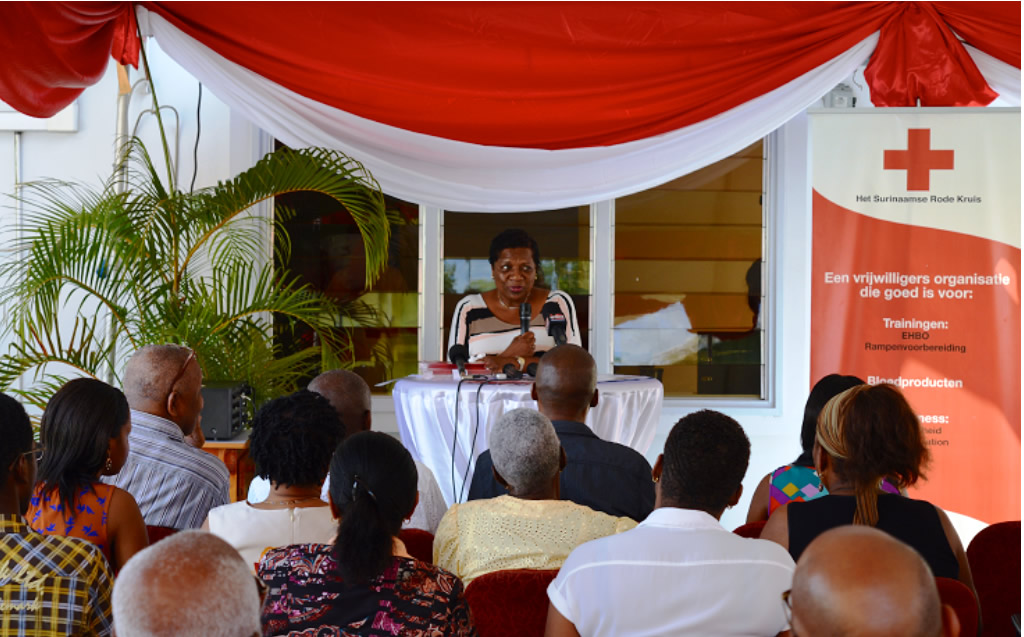 June, 2016. This, in the context of the expansion of the blood collection locations of the Stg. National Blood Bank and to support the optimization of blood supply in the interior (rural) in Suriname and in particular expanding the donor base and the broadening of opportunities to donate blood in several places in Suriname.

The launch took place prior to facilitating the first group of voluntary blood donors in the south of the country at Libi Makandra NV at the Senior residential and care complex on May 17, 2016 in Lelydorp with great interest from the press. An MoU was also signed and the event was held at our location at the Rode Kruislaan.

The project "Partnership for Life" 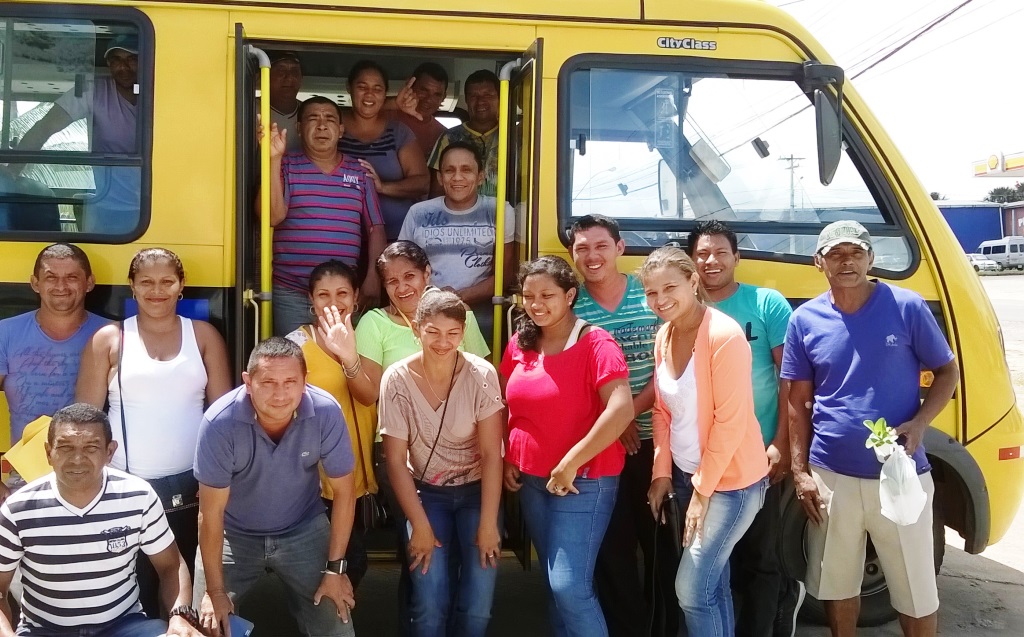 June, 2016. The project "Partnership for Life" started in September 2007 in the Blood Center of Capanema. It was an initiative of the Social Service of the Center to take the programs and projects already developed by HEMOPA Foundation to other cities of Caetés region. They visited 8 of the 16 municipalities — being the closest Capanema (Bonito, Manatee, Primavera, Tracuateua, Bragança, Nova Timboteua, Ourem and São João de Pirabas).

The project aims to request support to Municipal Ministries of Health and Education, to develop the program "Giving Agent" - with the Community Health Agents and the project "Blood Donor of the Future" in public schools, and support for uptake and transportation of candidates for blood donation to the Capanema Blood Center. If the Municipal Manager reports that they are unable to cooperate with the transportation for donors, we ask them to allow us to at least carry out the talks, which will be scheduled according to the availability of municipal services. If they count with the possibility of helping also with the transportation, then we schedule the completion of the talks, according to the availability of municipal services and then returned to the secretariats to continue the project.

From that first contact, seminars are held about the importance of blood donation for groups (students), for awareness and training of multipliers agents. In these talks/trainings, we can identify people with the profile of multipliers agents, which are asked if they wish to participate in the project and become a Multiplier agent in their region. These people are trained and receive information on blood donation and registration of bone marrow donors. We return to the Municipal Ministries, we informed whom are our multipliers agents and prepare together a travel schedule for the Capanema Blood Center, preferably about 8-20 donors per month, or according to the availability of the multipliers agents and services. 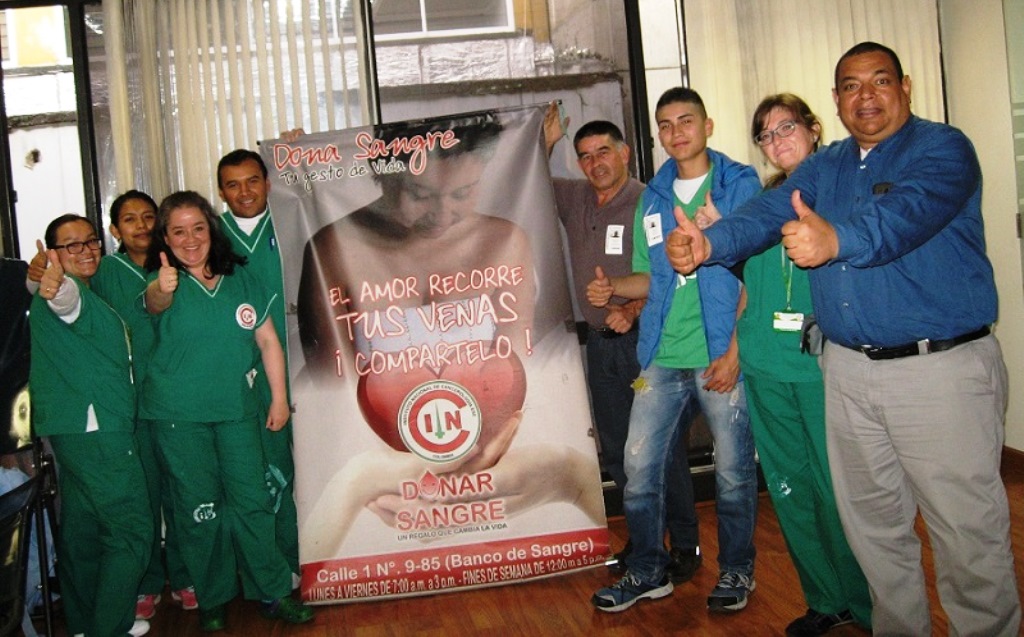 June, 2016. On May 25th, in the facilities of the Ministry of Health and Social Protection of Colombia, a blood drive was held among all the staff that who work towards the health of all Colombians to support the National Cancer Institute. Nearly 327 Colombians will be benefitted with this initiative. (Photo: Colombia. Ministerio de Salud y Protección Social) 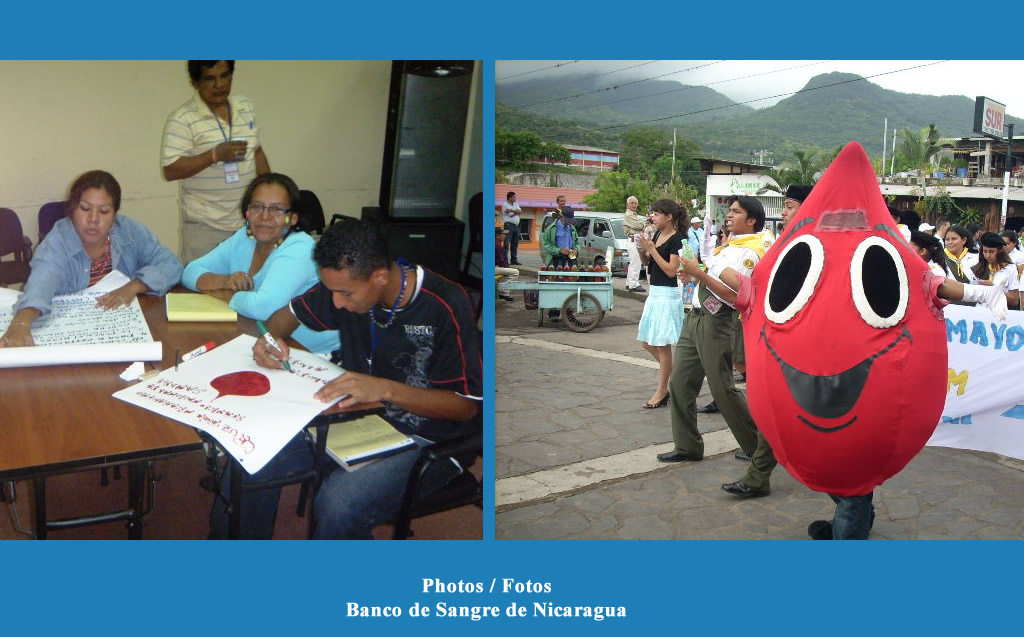 June, 2016. The blood bank, from the Ministry of Health of Nicaragua, held on the second week of October 2015 a mega blood donation campaign at the National Autonomous University of Nicaragua. It were colected 1,625 blood donations from voluntary donors. This successful initiative was supported by student associations, faculty and staff members, and the community movement (formed by eldery adults). Prior to the collection, the blood bank organized a training of trainers for promoters of voluntary blood donation. Tenty-one students were trained. Also, persons -between the ages of 55 to 70 years old - who are volunteers and community leaders participated and were key support for the success of this massive campaign. The promoters organize blood drives and campaigns in their communities where they visit homes, use loudspeakers to communicate key messages, paste posters in grocery stores, churches and community centers, and then they gather a list of potential blood donors that might be available to donate on the day of the blood drive.

For the campaign, once the trainer for the promoters was held, different activities took place to enhance the participation of the donors. Some of the activities are: banners are placed on the streets on week before; radio and TV spots; a media plan to publicize the activity; incentives (such as shirts, hats and keychains) are delivered to the blood donors; artistic groups (rhythmic gymnastics, dance groups, marimba and folk dance) are invited to a cultural event that takes place when the blood drive starts to draw the attention of donors; theater events about the importance of blood donation (including actors performing as patients receiving blood transfusions and voluntary blood donors) take place; and two days massive communication campaigns using loudspeakers to promote the campaign.

The art of donating blood 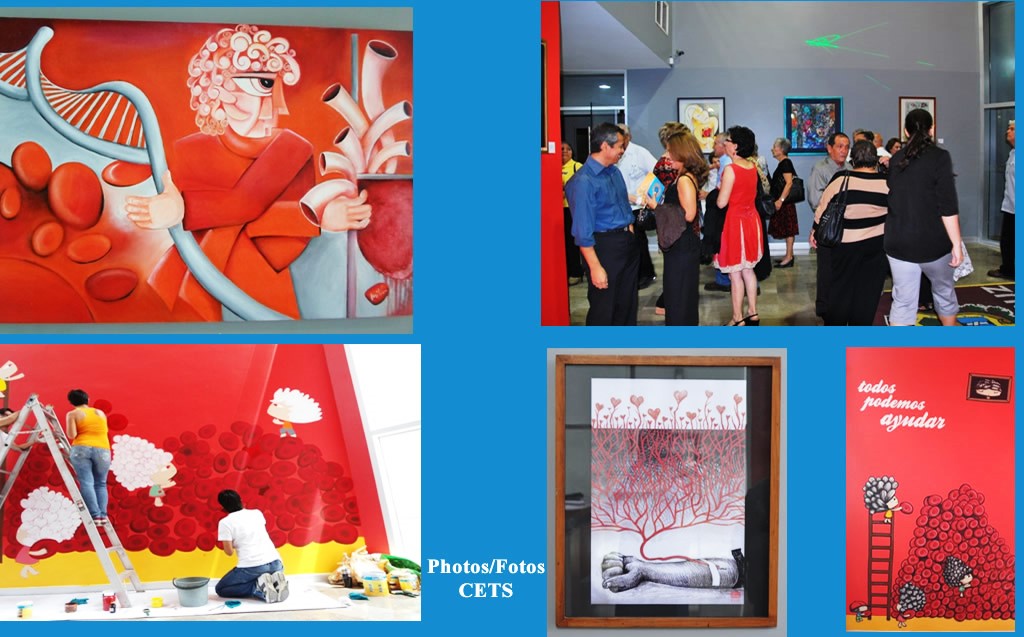 Jun, 2016. The Centro Estatal de Transfusión Sanguínea / State Center for Blood Transfusion (CETS) in Veracruz, Mexico, has developed cultural campaigns where it is demonstrated the strong link between blood donation and the strengthening and connection with communities. The facilities of the CETS are transformed for 2 months into an art gallery where different local artists present their pieces on blood donation, and show they work to society as an alternative and innovative way to raise awareness of the importance of blood donations. To date, more than 200 people have witnessed such works of art, and a varied number of artists have participated.

At the same time, the CETS has been working on preparing a new future generation of blood donors. Through a puppet show and a set of games they teach kids the importance of voluntary blood donation while they have fun. To date, more than 5,000 kids in the State of Veracruz have participated in these activities.

Diana, Xavier and Vinicio from Ecuador share their stories of blood donation 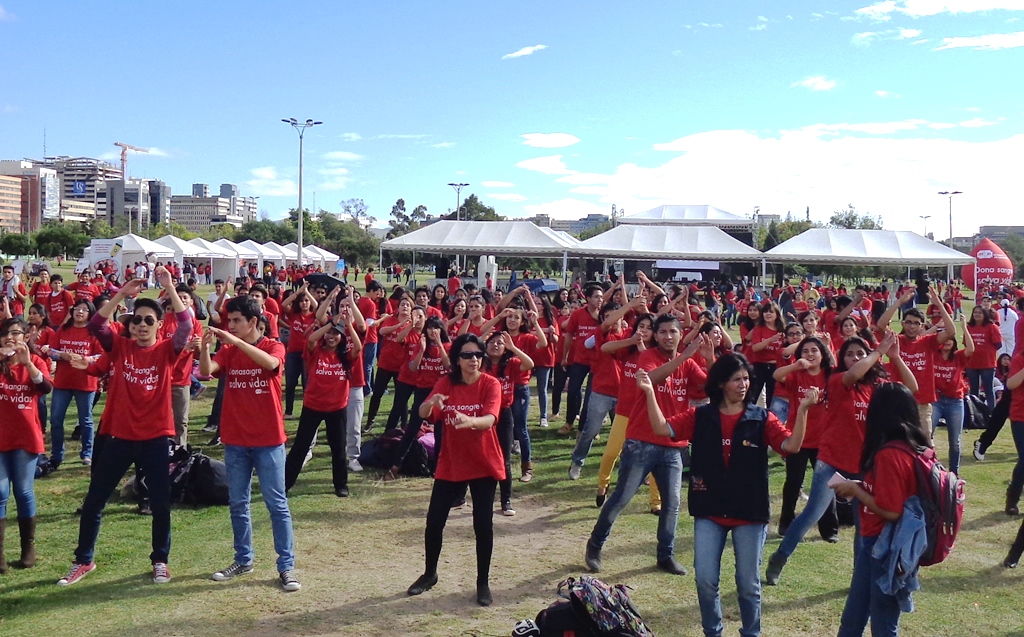 May, 2016. Diana, from Ecuador, recognizes the importance of collaborating with her community, and therefore she donates blood every 4 months. "We shouldn't wait until a family member or friend needs blood, but in the other hand we must regularly and voluntarily donate blood".

Xavier, who has received blood transfusions, urges everyone to donate blood voluntarily to strengthen their community.

Vinicio, a repeat voluntary blood donor, considers that blood drives and blood donation awareness campaigns are important and fill with satisfaction because of a sense of contributing to the common good and saving lives. 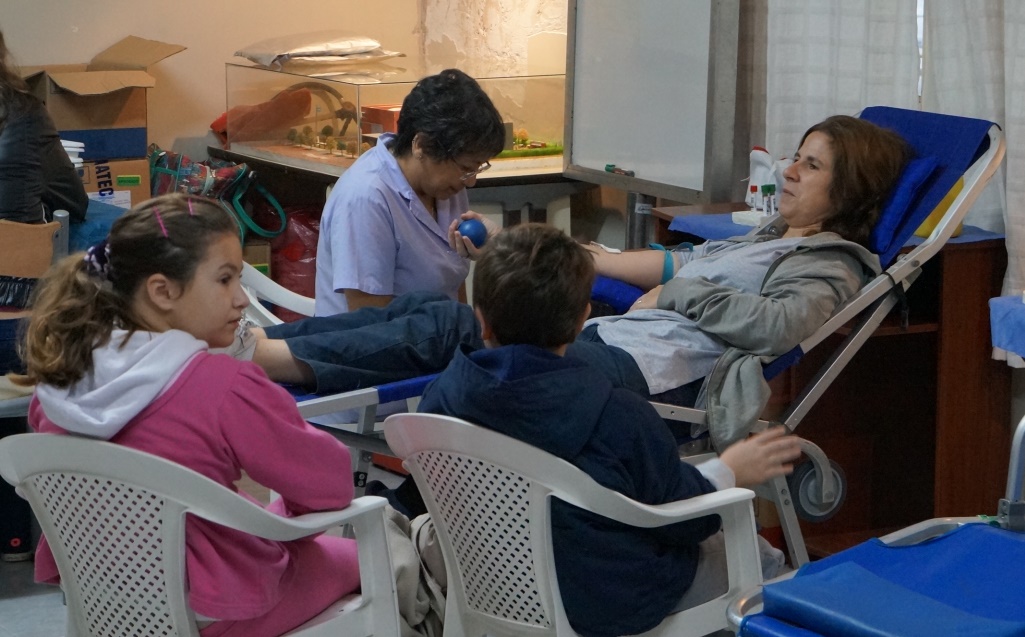 May, 2016. Thanks to the non profit "Acciones Solidarias Funenses" the event has settled the continued promotion of voluntary blood donation along with awareness of a more updated blood donation prototype. A team of physicians, technicians and volunteers got together once again to undertake blood draws and to thank volunteer donors by providing a nice breakfast.

In addition to this, representatives of INCUCAI (Central National institute of Ablation and Implants) recorded potential bone marrow donors. It should be noted as well that since 2015 the donation activities undertaken by "Acciones Solidarias Funenses" have been declared of interest by the Funes town council.

The Bermuda Story - Donate blood, you can save lives and also be superhero 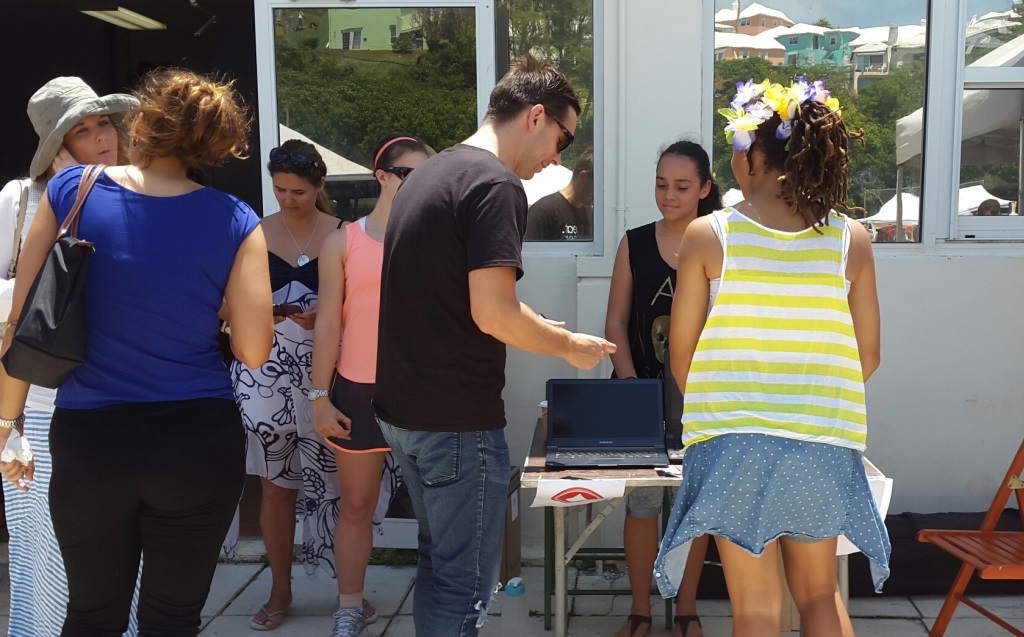 May, 2016. With this strong message and the help of social media, three Bermudian students are trying to raise awareness on the need of blood donors in their country and the simplicity of donating. As part of a school assignment and with the intention to develop a community service project, the three 9th grade students decided to promote blood donation.

As the students said:"At the end of the day, you are saving someone's life and making a real difference to the community. Really, you are being a hero". Furthermore, according to the girl's comments, there has been a significant decrease in blood donors within the community.

That could be explained by the fact that present donors are aging or retiring and new emerging blood transmissible infections are making some of the ineligible. Apart from social media account, the girls are also being supported by videos, stickers, posters, and even a website "Blood for the People".

Hopefully this great initiative will help not only to increase the blood supply in Bermuda, but also to strengthen community relationships.