An interview with Dr. Ritesh Dhanpat on the implementation of the HEARTS Initiative in Suriname 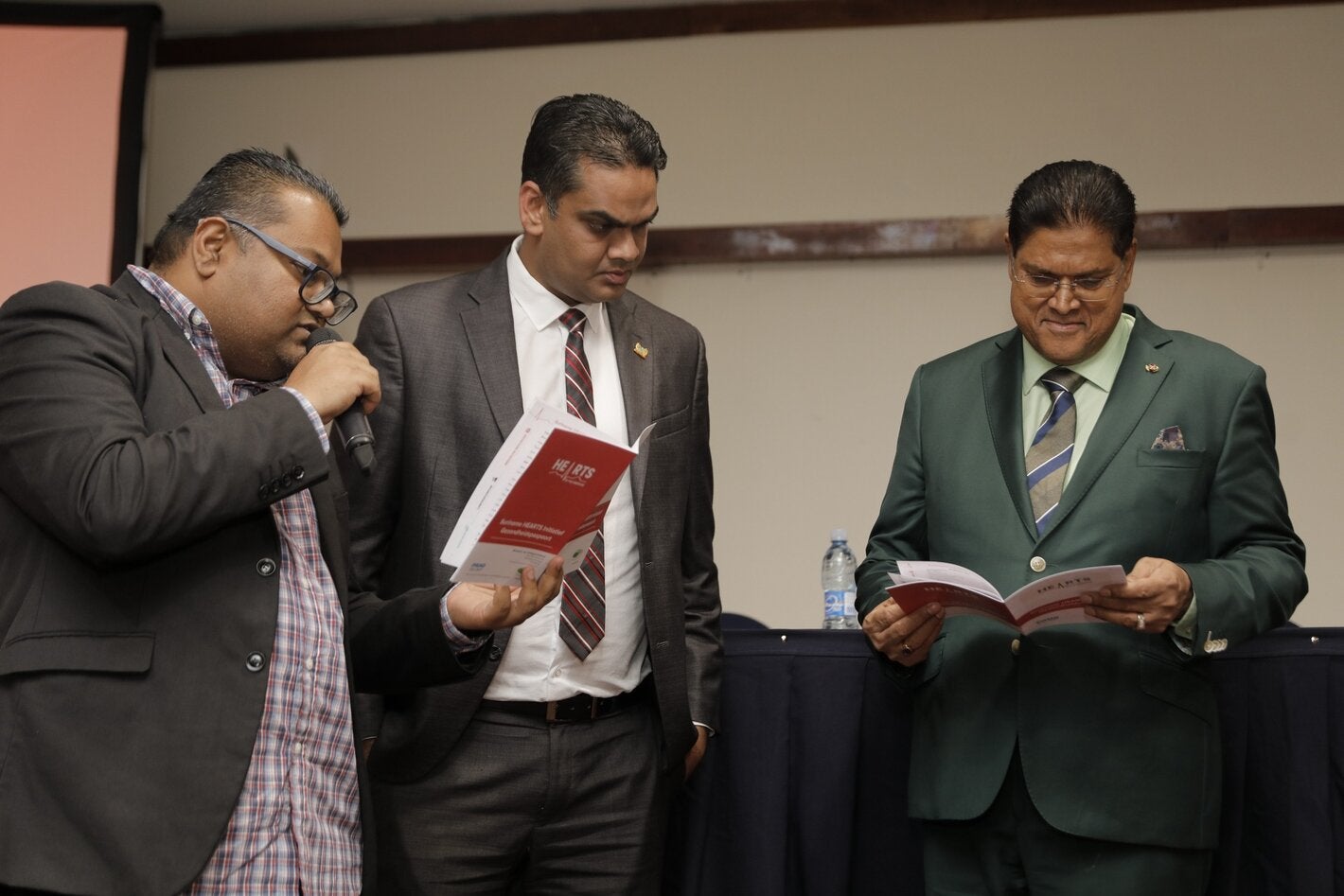 During the training, the President of the Republic of Suriname, Chandrika Santokhi, unveiled important tools to support the implementation of this initiative such as posters, flowcharts and written protocols, as well as the introduction of the chronic care passport in Suriname.

The PAHO country office in Suriname interviewed the Deputy Director of Health and member of the HEARTS National Coordination Team, Dr. Ritesh Dhanpat, to gain his perspective on the implementation of this initiative in the healthcare system of Suriname. Dr. Dhanpat has been a practicing general physician with a private practice for about 10 years. As Deputy Director of Health, he stated that his main focus area is on primary health care in Suriname.

What was the purpose of the training?
The purpose of the training was to introduce the HEARTS protocols to be implemented in order to successfully move towards this new direction in health care and inform general physicians and healthcare clinics what the Ministry of Health is aiming to achieve with the HEARTS initiative which is to lower the prevalence of non-communicable diseases. One of the corresponding goals in this regard is to have reduced the number of individuals with hypertension to 25% of the population in 2030, which is in accordance with the Sustainable Development Goals (SDGs.) All participants of the training will continue this trajectory in January of 2023.

How was the attendance and how was the training received?
We were pleased with around 30 clinics that participated. This included 26 general physicians, 2 Medicial Mission clinics and 2 Regional Healthcare Services (RGD) clinics. All-around the reactions from the field have been positive, because a big impact on public health can be made without any invasive procedures. One of our campaigns starting in January is called #KnowYourNumbers, urging the population have their blood pressure checked at their doctor’s office or nearby clinic. By implementing the HEARTS protocols, immediate action can be taken, and guidance offered to individuals with numbers indicating a (growing) risk. 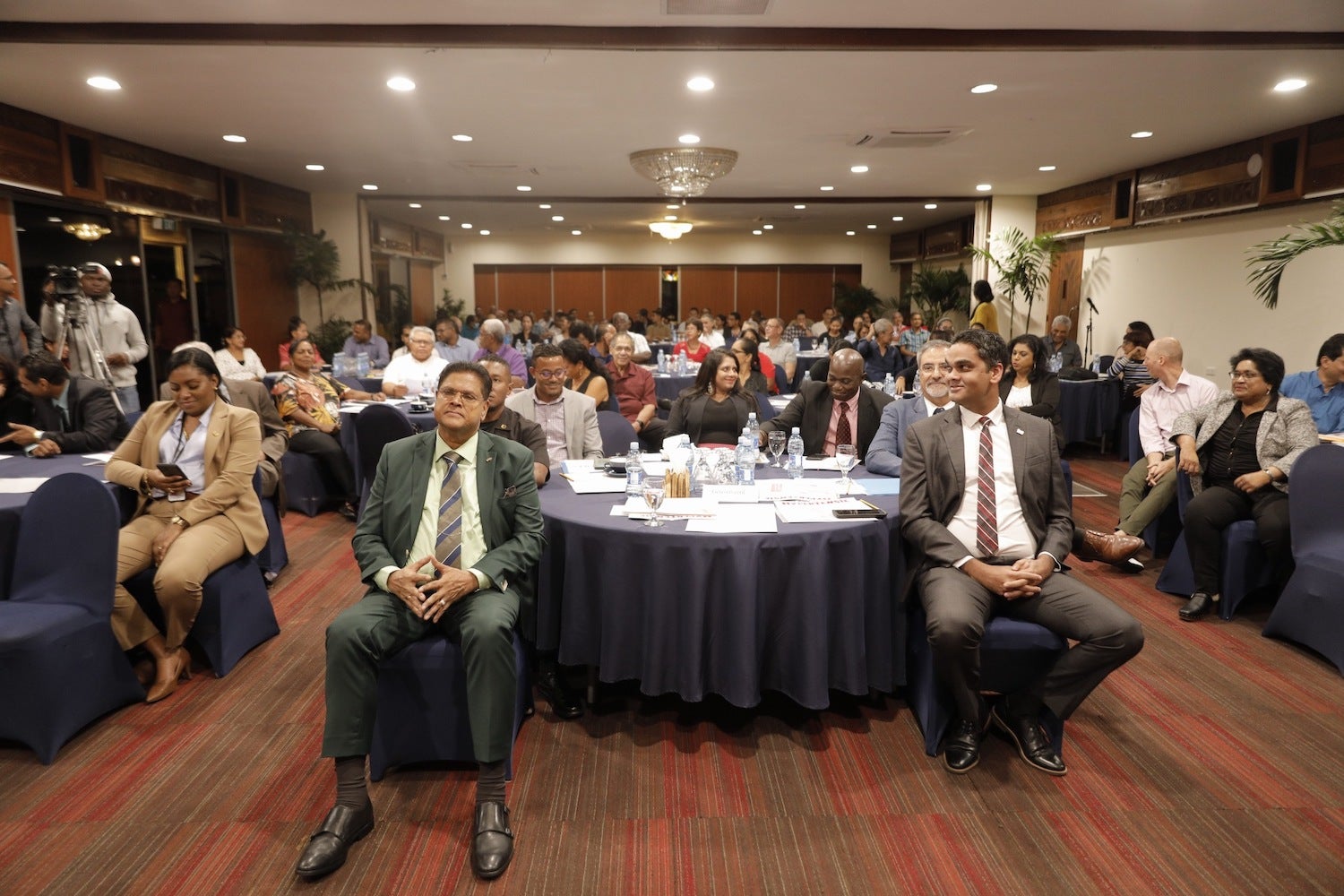 The President attended the training on 2 December with an active role in the introduction of this initiative. What does that mean for the programme?
It is incredibly important and empowering to the programme to have the President involved, because it indicates commitment from the highest level of the government. The President unveiled the hypertension treatment protocols and the 4-part poster set promoting the #KnowYourNumbers campaign, which we believe will increase the participation of the population.

Can you tell us more about the timeline? When will the modified service be introduced in the healthcare clinics?
Around a year ago we attended the first presentations about the HEARTS initiative, led by a delegation from the PAHO headquarters in Washington, DC and we were very interested in participating. I believe it was February 2022 when we formally communicated our participation and we started right away with forming the national and international coordination team as well as the protocol committee to review and renew existing protocols. While almost all public healthcare organizations were on board from the start, it took a bit more time and effort to reach the private healthcare sector and the medical specialists. However, we believe that with the current 30 clinics that will continue to implement HEARTS in January, that we can catch up on lost time. In total there are 400 clinics in Suriname, all of which we would like to implement HEARTS within the coming year.

“The extensive guidance by the experts at PAHO have provided us with evidence-based knowledge and numbers of the impact of this initiative in other countries. During this trajectory, PAHO also supported us with the layout and printing of the chronic care passport, the revised protocols and flowcharts for the clinics. We have a great collaboration with the PAHO and are grateful for all the support received and look forward to continuing with these efforts in 2023.”

What are some of the challenges clinics fear or face regarding the implementation of HEARTS?
A lot has to do with physical space. Not every clinic has the amount of space or rooms needed in order to adhere to the protocols. For example, there are separate rooms needed for measurements, for consultation with the doctor but also one for consultation with a healthcare worker after seeing the doctor. In some cases, there will also be more trained staff needed.