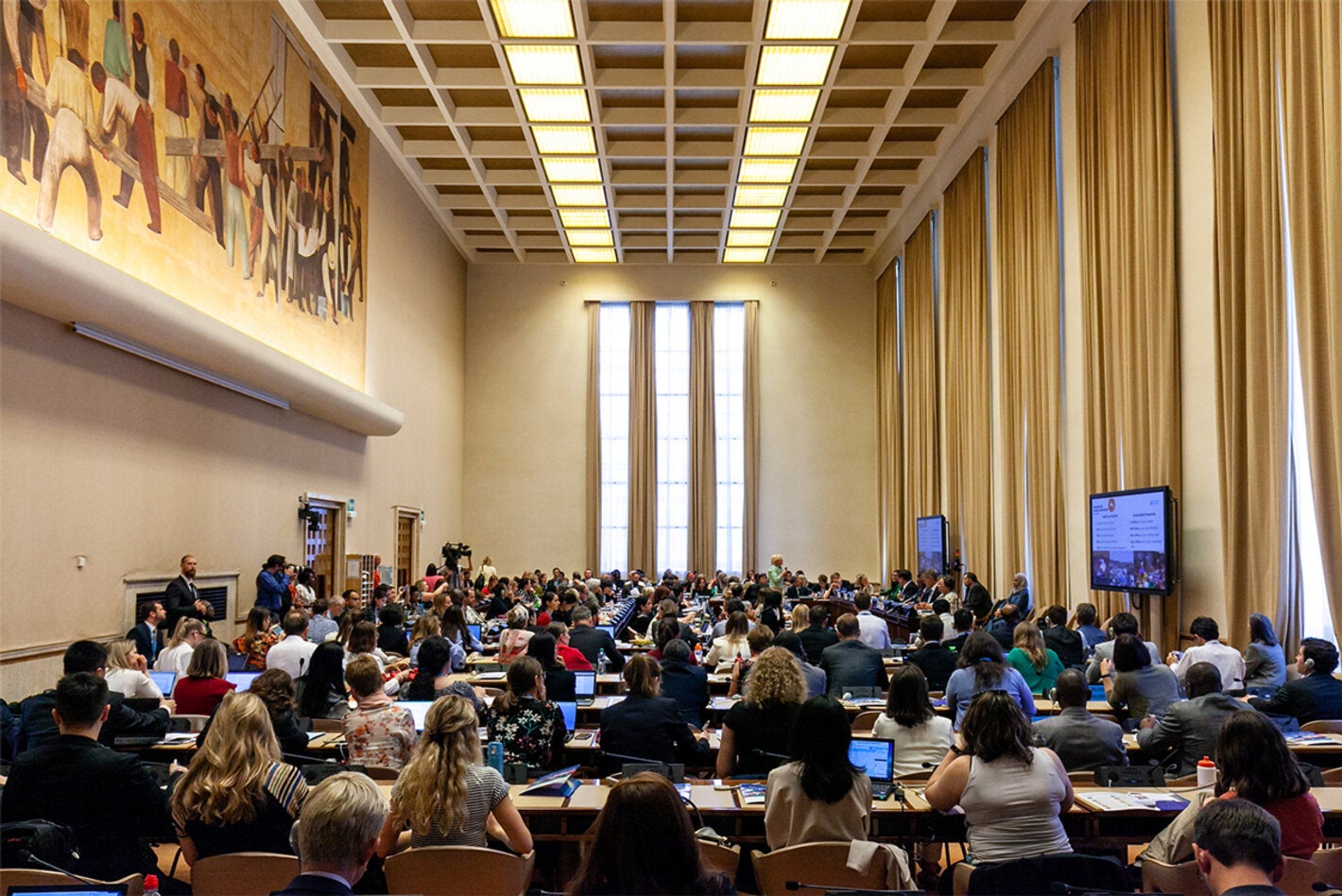 Geneva, 24 May 2018 (PAHO/WHO)- Delegates from the countries that are participating in the 71st World Health Assembly reached agreements on issues such as noncommunicable diseases and tuberculosis, two diseases that will be addressed at the United Nations High-Level Meeting in September of this year.

Representatives of the Member States considered WHO's five-year strategic action plan on polio transition. They also endorsed a resolution urging cholera-affected countries to implement a roadmap that aims to reduce deaths from the disease.

World Health Assembly delegates called for stepped up action in the global fight to beat noncommunicable diseases (NCDs), including urging for participation by heads of state and government at the Third United Nations General Assembly High-level Meeting on the Prevention and Control of NCDs on 27 September 2018.

Member States reiterated that the international community has committed, in line with the Sustainable Development Goals (SDG), to reduce by one-third by 2030 premature deaths from NCDs, primarily cardiovascular disease, cancers, diabetes and chronic respiratory diseases, and to promote mental health and wellbeing. Each year, 15 million people aged 30 to 70 years die from an NCD and the current levels of decline in risk of premature death from NCDs are insufficient to meet the SDG NCD target.

The Assembly recognized that enhanced political leadership is needed to accelerate prevention and control of NCDs, such as by implementing cost-effective and feasible "best buys" and other recommended interventions to prevent and control NCDs. These measures include actions to reduce the main disease risks, namely tobacco use, physical inactivity, harmful use of alcohol and unhealthy diets, as well as air pollution. Health systems must be strengthened by implementing effective measures that better detect people at risk of NCDs and providing drug therapies and services to reduce deaths from heart attacks, stroke and diabetes. Prevention and management of mental disorders also requires urgent action.

Position of the Americas

The group of countries of the Americas reiterated its commitment to the prevention and control of these diseases that account for three quarters of all deaths in the region. The delegates invited all Member States to be represented at the United Nations meeting at the highest political level, to renew and reinforce the work involved in implementing the measures required to reduce the burden of these diseases.

All countries face challenges in preventing and controlling these diseases and their main risk factors, the delegates said. To effectively address NCDs and promote mental health, as well as the social, economic, and environmental determinants of health, a whole-of-government and a whole of-society approach should frame these actions at the national level. "Strong political will, national and international investments, cooperation and action across sectors, as well as responsible engagement and multi-sector partnerships between all stakeholders are necessary to achieve these health objectives," the statement says.

The countries of the Americas called on the World Health Organization to strengthen its role in supporting Member States to implement national NCD responses and build adequate capacities at the national level. They also asked WHO to scale up the coordination of necessary activities with other relevant stakeholders.

Today delegates considered WHO's 5-year strategic action plan on polio transition designed to strengthen country health systems impacted by the scaling down and eventual closure of the Global Polio Eradication Initiative (GPEI). The strategic plan was based on the priorities of the national government transition plans, and developed in close collaboration with WHO regional and country offices. The implementation of the plan will require coordination with all country-level and global partners. The plan complements the Africa Immunization Business Case to strengthen immunization systems in the African continent, and also the significant progress made in the integration of the polio functions in the South-East Asian Region.

The strategy supports country ownership of essential polio functions like surveillance, laboratory networks, and some core infrastructure that are needed to (i) sustain a polio-free world after eradication of polio virus; (ii) strengthen immunization systems, including surveillance for vaccine-preventable diseases; and (iii) strengthen emergency preparedness, detection and response capacity to ensure full implementation of the International Health Regulations.  WHO commits to continue providing technical assistance and resource mobilization support to countries engaged in polio transition.

Delegates noted the importance of integrating essential polio functions into national health systems.  They proposed that this plan be a "living document" and be revised based on the development of the Programme Budget for 2020-21, and requested an updated report for the 144thExecutive Board and the 172ndWHA.

Delegates agreed on a resolution urging the WHO Director-General, Member States and partners to continue support to preparations for the high-level meeting of the UN General Assembly on ending tuberculosis in September this year.

The resolution also commits Member States to accelerate their actions to end TB, building on the commitments of the WHO Global Ministerial Conference on Ending TB, held in Moscow in November 2017. It welcomes WHO's efforts to develop a multisectoral accountability framework towards ending TB, and requests the Secretariat to develop a new global strategy for TB research and innovation and supports next steps in its development and use.

Current efforts to implement the World Health Assembly-approved End TB Strategy and to meet the SDG target of ending TB are currently falling short. TB claimed 1.7 million lives in 2016 worldwide, including 0.4 million among people with HIV. TB remains the leading infectious disease killer in the world and is one of the top ten global causes of death. It is hoped that the September meeting will prompt a renewal of high-level political commitment to accelerate action to end TB.

Delegates endorsed a resolution urging cholera-affected countries to implement a roadmap that aims to reduce deaths from the disease by 90% by 2030. The resolution also urges WHO to increase its capacity to support countries fighting the disease; strengthen surveillance and reporting of cholera; and reinforce its leadership and coordination of global prevention and control efforts.

‘Ending Cholera: A Global Roadmap to 2030' was launched last year by the Global Task Force on Cholera Control (GTFCC) and underscores the need for a coordinated approach to combat the disease with country-level planning for early detection and response to outbreaks, and long-term preventive water, sanitation and hygiene (WaSH) interventions.

At an information session on health, the environment, and climate change, a coalition was launched to address the challenges of air pollution. This coalition is comprised of WHO, the United Nations Environmental Programme (UNEP), and the World Meteorological Organization, with the support of the Climate and Clean Air Coalition.

The WHO Director-General, Tedros Adhanom Ghebreyesus, praised the formation of this alliance and expressed his hope that it has concrete outcomes. He said that the way to address environmental health problems is "prevention, prevention, and prevention." He also stressed that the smallest islands are the most affected by the impact of climate change on health, which is why WHO is focusing more effort in those areas. "They are the ones that require more focus and attention," he said.

The occasion served to give several countries the opportunity to share their perspectives on the challenges they face in environmental health and climate change. In this context, the Director of the Pan American Health Organization (PAHO), Carissa F. Etienne, reminded those in attendance that she is from Dominica and that the issues of health and environment are close to her heart. She listed the actions that PAHO is taking to address this issue with the countries.