A Century of Public Health in the Americas: A PAHO Family Album

Since its founding in 1902, the Pan American Health Organization (PAHO) has been a central part of a century-long pursuit to bring health to all the peoples of the Americas. The world's oldest international health organization, PAHO has a history that is rich with the stories of dedicated individuals who faced major challenges and who, in many cases, achieved remarkable success. This "PAHO Family Album" salutes their valuable work and their accomplishments of 100 years of Pan American efforts in public health.

In July 1902 the Monthly Bulletin of the International Bureau of the American Republics reported on the conference that planted the seeds for the creation of the Pan American Health Organization (PAHO): "The Second International Conference of the American States further recommends...that a general convention of representatives of the health organizations of the different American Republics shall be called...to meet at Washington, D.C., within one year...that said convention...shall designate a permanent executive board of not less than five members...to be known as the 'International Sanitary Bureau,' with permanent headquarters at Washington, D.C."

Dr. Carlos Finlay (1833-1915), a distinguished Cuban physician and student of yellow fever, was one of four members of the 1902 organizing committee charged with setting up the new International Sanitary Bureau (the forerunner to PAHO). Dubbed "the mosquito man" by his critics, Dr. Finlay (on the right) had argued as early as 1881 that the mosquito was the sole vector for yellow fever, but he was unable to prove his theory.

When in 1900 Maj. Walter Reed's Yellow Fever Board proved Finlay right, the stage was set for eradication efforts that routed the disease in the Caribbean and allowed completion of the Panama Canal.

Dr. Walter Wyman (center), surgeon general of the United States, became the Bureau's first chairman. His experience transforming the U.S. Marine Hospital Service into a comprehensive national public health agency helped shape the early work of the Bureau, which he headed until 1911.

"[We] request...of the Governments of the American Republics that they favor the establishment in seaports and important cities of laboratories where not only diagnoses may be made in order to comply with the requirements contained in the resolutions of our sanitary conventions, but where also original investigations in tropical medicine and general pathology can be made along lines which the sanitary authorities deem practicable."

He had carried out crucial campaigns against bubonic plague in San Francisco (right) in 1902-04 and after the earthquake and fire of 1906.

Yet his years at the Bureau were marked by a decline in inter-American health cooperation, an indirect result of the outbreak of World War I.

Under his leadership, the Bureau's budget more than quintupled, and its activities expanded to cover a wide range of public health issues.

PAHO started life in December 1902 as the International Sanitary Bureau, a paper organization with no permanent staff or office space.

By 1921, the Bureau had found a home in the Ibero-Renaissance-style headquarters of the Pan American Union (forerunner of the Organization of American States).

Renamed the Pan American Sanitary Bureau in 1923, the health agency finally became known as PAHO in 1958.

The 1924 Pan American Sanitary Code was the first treaty to be signed by all the republics of the Americas. Dr. Carlos Graf, delegate of Chile (seated far left), wrote of the occasion...

"We delegates gather once again, yearning for progress and the possible perfection of our health institutions, taking new steps that will be firm and sure in the spirit that guides us, to maintain the health, well-being, and correct development of our peoples, to liberate them from the snares of the 100-headed hydra of vice and pain, and when possible, to extend those benefits to the rest of the world's peoples, for by natural law, the younger, with their strength, should help the eldest."

Dr. Carlos Chagas (1878-1934), delegate of Brazil to the Sixth Pan American Sanitary Conference, discovered American Trypanosomiasis, known as Chagas' disease, in 1909. An early antimalaria campaigner and onetime director of Brazil's Department of Public Health, he was nominated twice for a Nobel Prize, though he never won the award.

Dr. John D. Long, PAHO's first "traveling representative," worked for the Organization for 25 years, promoting sanitation campaigns against epidemic diseases including bubonic plague. A coauthor of the Pan American Sanitary Code and the health codes of Chile, Ecuador, and Panama, Long received numerous honors from the countries of the Region. 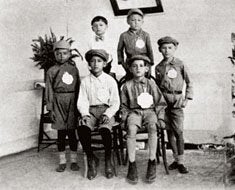 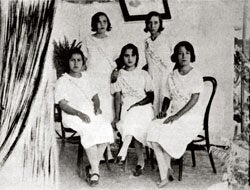 Children and youths called "legionnaires" helped carry out antimalaria campaigns in Venezuela in the 1930s. PAHO has promoted community participation in public health projects throughout its history.

In 1949, PAHO Director Dr. Fred Soper (seated far right) signs an agreement with the World Health Organization (WHO) making PAHO the Regional Office for the Americas of WHO. Under Soper's energetic leadership, PAHO's budget increased from less than $100,000 in 1947 to $10 million in 1958. Its staff grew from 88 to 750. Soper remained director until 1959.

That friend and foe shed ne'er a tear,
As Ankylostoma heard the knell
When Soper's entourage drew near.
On Aedes he cast a spell;
Anopheles soon quaked with fear.
"Eradicate!" we learned to yell
As Soper's couriers sped like deer,
O'er land and sea his creed to sell.
...Triumphant he in public health,
We rightly call him sage and seer.
For none can measure all the wealth,
The joy that he has made appear.

By mid-century, mosquitoes were becoming resistant to insecticides, and "eradication" efforts began to include not only spraying, but also stepped-up targeting of larval habitats and mass treatment of the population with antimalaria drugs.

INCAP was one of three international research and training centers established by PAHO during the 1950s. The others were the Pan American Foot-and-Mouth Disease Center (PANAFTOSA) in Brazil and the Pan American Zoonoses Center (CEPANZO) in Argentina.

The First Conference of Schools of Public Health, held in San Miguel Regla, Mexico, in 1959, and subsequent PAHO-supported conferences, facilitated the exchange of information and experiences about public health education in the Region.

In the mid-1950s, PAHO adopted a long-term plan for training health workers in the Region and placed new emphasis on preventive and social medicine.

His tenure spanned a time of social and political upheaval in the Americas, but also one of growth in PAHO's influence and activities, and progress in health and development throughout the Region.

Dr. Héctor R. Acuña, of Mexico, was named PAHO director in 1975 after 20 years at the Organization. In response to member countries' growing public health capabilities and progress in health throughout the Region, he spearheaded a major reorganization of PAHO emphasizing information and management systems and delegating greater responsibility to its field offices.

Despite decades of eradication efforts, the disease remained endemic in the Americas.

In a 1977 address to members of the Study Group on Malaria Control in the Americas, PAHO Director Dr. Héctor R. Acuña noted, "We see programs stalled in some countries and in certain areas an outright deterioration in the disease's epidemiological situation."

His contributions included building new links between the health and agriculture sectors and factoring economic and social considerations into public health.

His Zoonoses and Communicable Diseases Common to Man and Animals (coauthored with Boris Szyfres) became the definitive text on the subject.

Today PAHO presents an annual award in his name to encourage research in veterinary public health.

Dr. Carlyle Guerra de Macedo served as director of PAHO from 1983 to 1995. A distinguished public health figure in Brazil, he pursued an international career and launched PAHO's successful drive to eradicate polio from the Americas.

Dr. Macedo was named director emeritus following his retirement in 1995.

Dr. George A.O. Alleyne became director of PAHO in 1995 after first joining the Organization nearly 15 years earlier. His stewardship of PAHO has focused on equity and Pan Americanism, promoting the goal of "Health for All" throughout the Americas.

A native of Barbados, Dr. Alleyne has been awarded the Order of the Caribbean Community, the highest honor bestowed on a Caribbean national, and in 1990 he was knighted by Her Majesty Queen Elizabeth II in recognition of his contributions to the medical field. 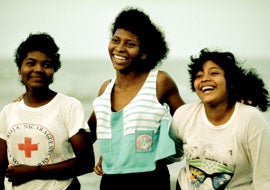 At the dawn of the 21st century, PAHO's focus is on helping the countries of the Americas ensure the benefits of health to all their peoples. PAHO is working to strengthen national and local health systems in cooperation with government and other international agencies, nongovernmental organizations, universities, professional and community groups, and individuals.

The future of the Americas lies in the health of its peoples. PAHO and all those who work for, with, and alongside it are members of the PAHO family, sharing a common commitment to the goal of "Health for All by All" in this century as well as those to come. 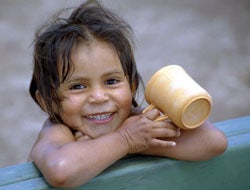