The Pan American Sanitary Code: Toward a Hemispheric Health Policy 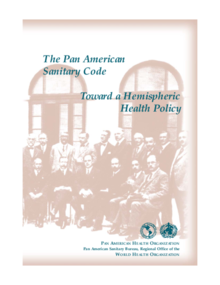 The Code, which was eventually ratified by all the republics of the Americas and remains in force today, represents the greatest achievement in health policy-making in the American hemisphere and the culmination of decades of international initiatives aimed at prolonging people’s lives and ensuring their happiness.

Download from the PAHO Digital Library
Health promotion
Other publications