Wellness Week 2018: The art of cooking a healthy future

The birthplace of 30-year-old Roberto Valenzuela, the Nuevo Amanecer neighborhood in El Alto, Bolivia, is more than 4,150 meters above sea level. Roberto is an urban artist, break dancer, and representative of the citizens´ collective of the Manq´a (“food” in the Aymara language) Cooking Schools.

The Manq´ a Cooking Schools are part of an initiative geared at youth in at-risk situations. The project´s goal is to create opportunities by placing renewed value on consuming local, healthy products. The schools are part of the Bolivian Gastronomical Integration Movement (MIGA by its Spanish acronym), which seeks to promote the rich culinary heritage of the country, as well as promote healthy cooking. 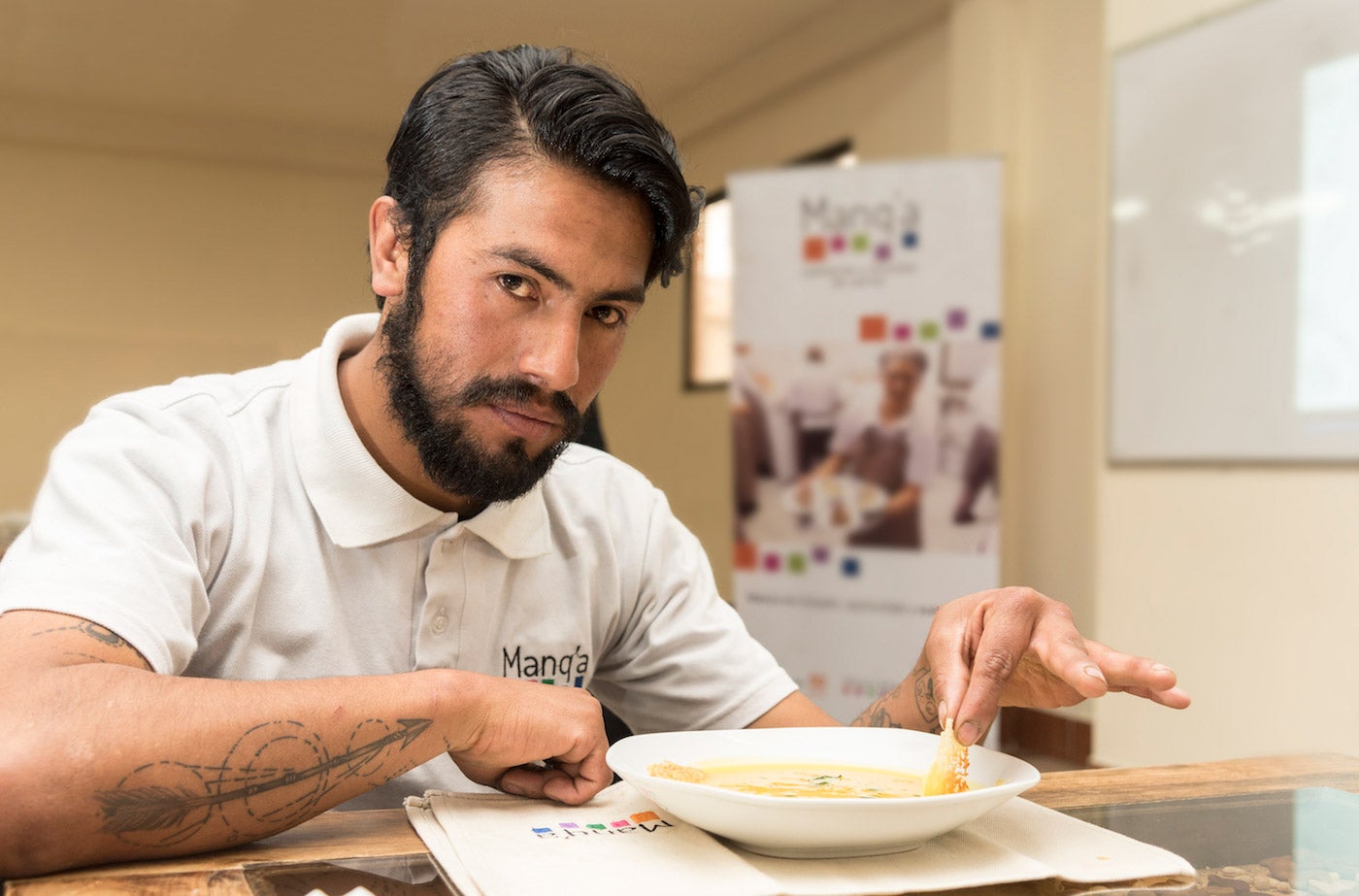 Roberto is a Manq´a Cooking School graduate. The memory of his grandmother´s chicken soup, and the effect it had on his body, was what pushed him to become a chef, and later, a health promoter. “I recall the succulent soup my grandmother made with chicken thighs and vegetables,” says Roberto, who went on to describe that it was a powerful meal that helped him maintain the physical status needed for breakdancing. “I realized that healthy foods can give you a healthy life, and my curiosity about this led me to the Manq´a classrooms.”

One of the 10 cooking schools is in the Santa Isabel zone on the west side of El Alto, a city of more than a million residents, the majority of who are Aymara migrants who have moved from the countryside. There, one can find popular eateries that are improving the nutrition of each zone´s residents with healthy food made from local ingredients. In fact, Manq´a´s slogan is “cooking a healthy future.” 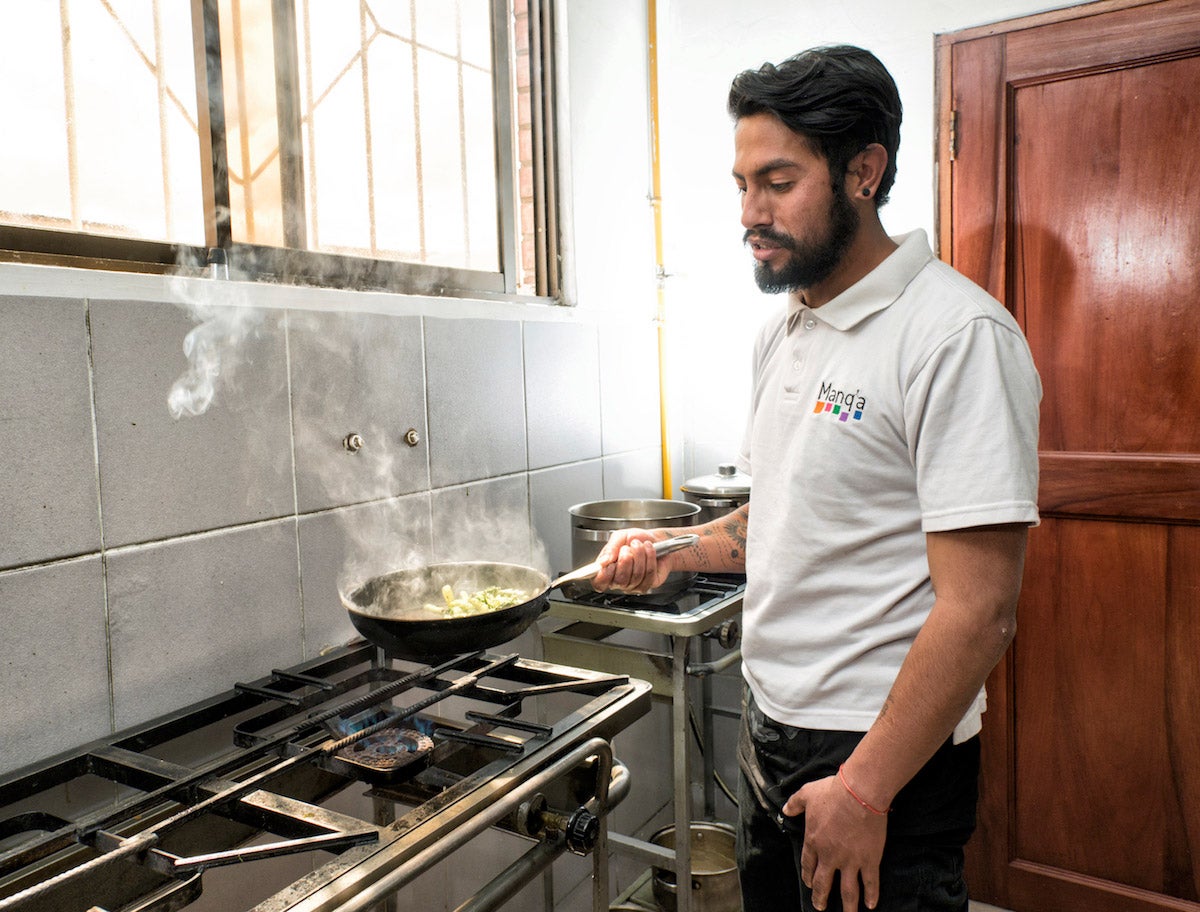 “It´s a huge challenge since over the past few years, the residents of the city have changed their eating habits to favor foods that are high in saturated fat, sugary and processed drinks, and fast food,” says the young chef.

Upon graduating and facing the nutritional reality of El Alto—especially among children and youth—Roberto decided to start a collective of the Manqa´a Cooking Schools´ graduates and current students, in order to promote healthy eating. “To promote health, we need to know more about the food we eat,” he says.

The collective holds community dialogues and fairs, visits schools, and speaks to people around the city. Roberto is the leader and has quickly formed partnerships with other collectives, including urban breakdancing street artists, as a way to incorporate physical activity and knowledge of healthy eating.

“One of the most beautiful experiences was at a school when parents and children came together to jointly present about healthy foods,” says Roberto. “Parents play an important role.” 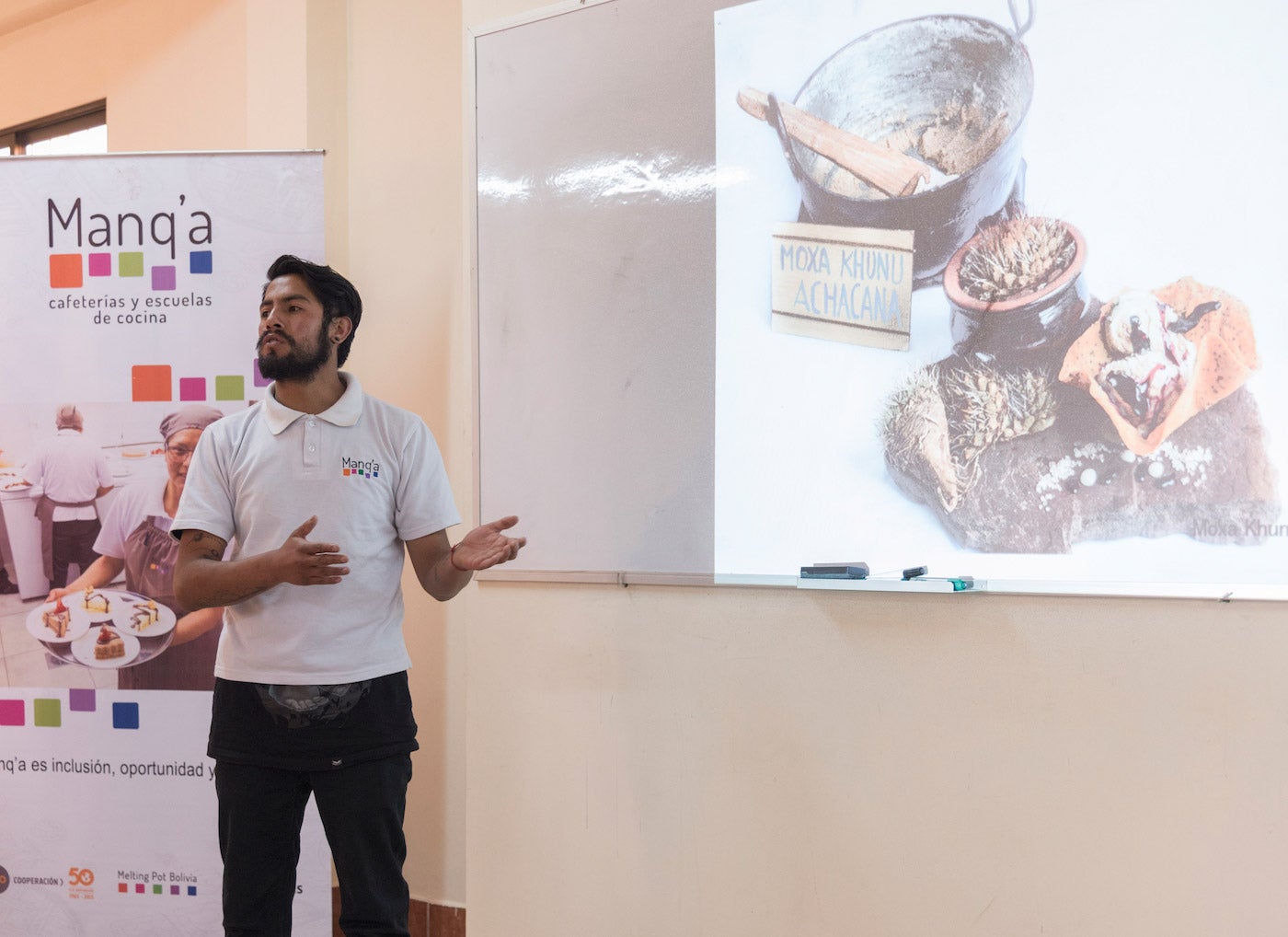 Roberto is raising funds to start a neighborhood business where he can market healthy food while continuing to work on urban art. “The formula for a long, healthy life is physical activity and healthy food,” he says.

Choosing foods, selecting each vegetable, peeling, carefully washing the leaves, selecting the spices, chopping, squeezing, seasoning with herbs, and simmering are all things that Anahí Reyes Antequera takes very seriously – not only because she´s an experienced chef of more than 31 years, but also because with every move she makes in the kitchen, she reaffirms the importance of healthy food in people´s lives.

Anahí learned as a child that selecting and preparing fresh foods for traditional cooking are important family and social values that should not be lost. Together with a larger group of individuals and institutions, Anahí is a pioneer in the movement to reemphasize Bolivian culinary heritage. 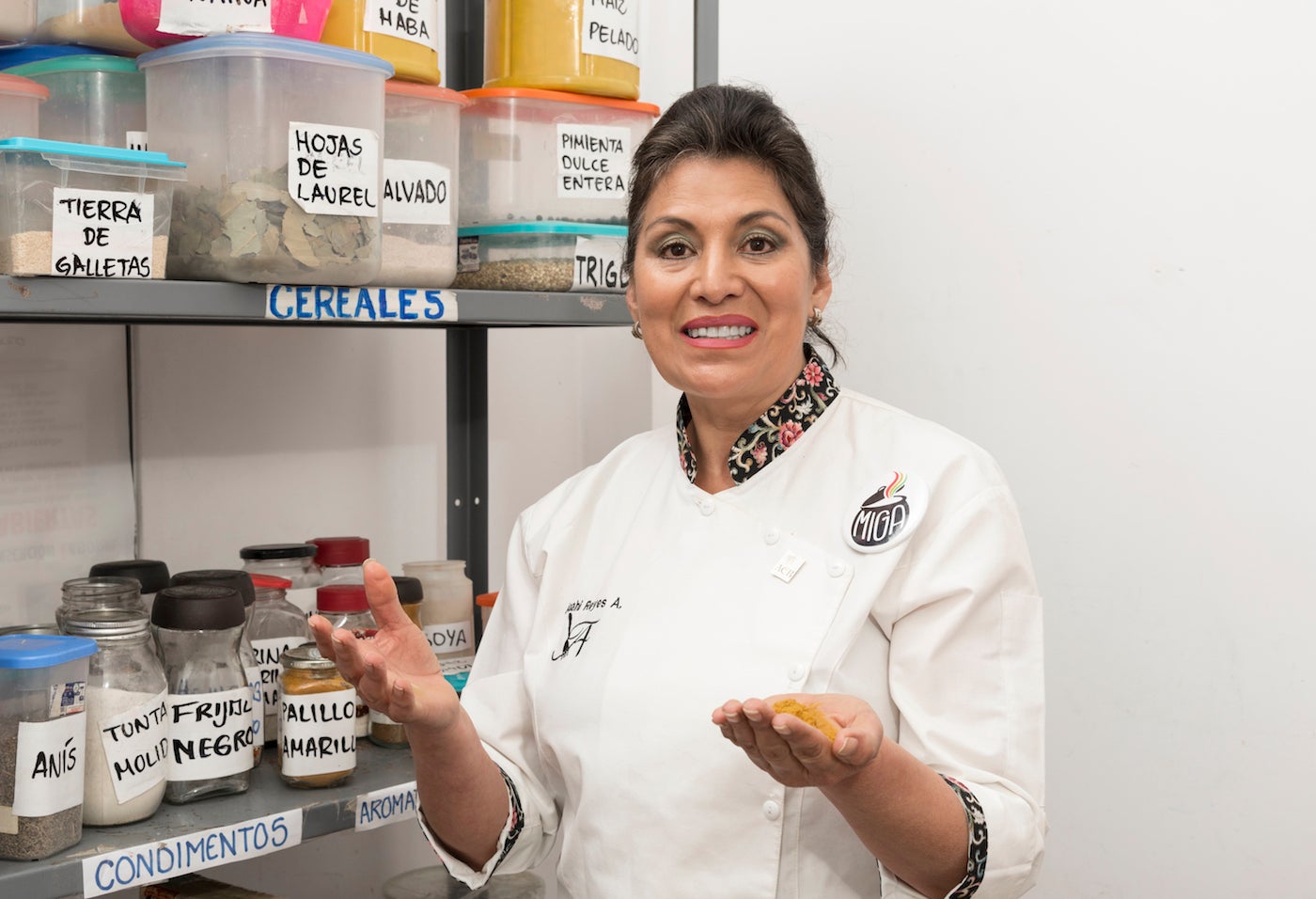 Bolivia´s great natural diversity from its many ecoregions has resulted in a rich and valuable culinary culture and heritage. Over the past few years, important initiatives have been started among chefs and cooks to revalue this heritage; Anahí is one such chef who has rescued traditional techniques and processes to focus on using local products to make nutritious foods. 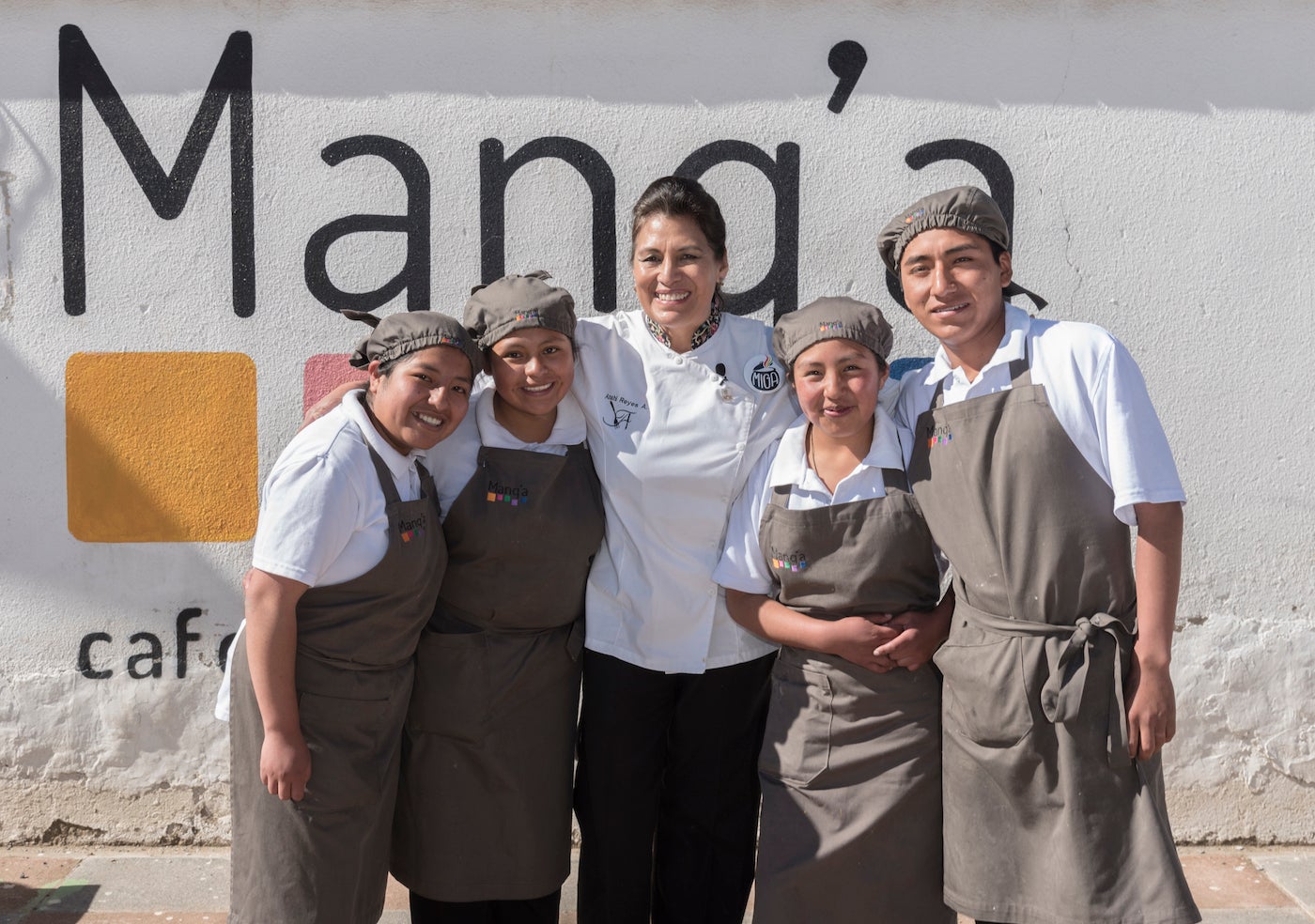 Anahí is the president of the board of the Bolivian Gastronomical Integration Movement (MIGA by its Spanish acronym), an initiative that has joined groups of national and international public-private institutions under a manifesto with 11 commitments, including promoting healthy food and committing the food production chain to a diverse array of native and local products in order to improve Bolivians´ living conditions. 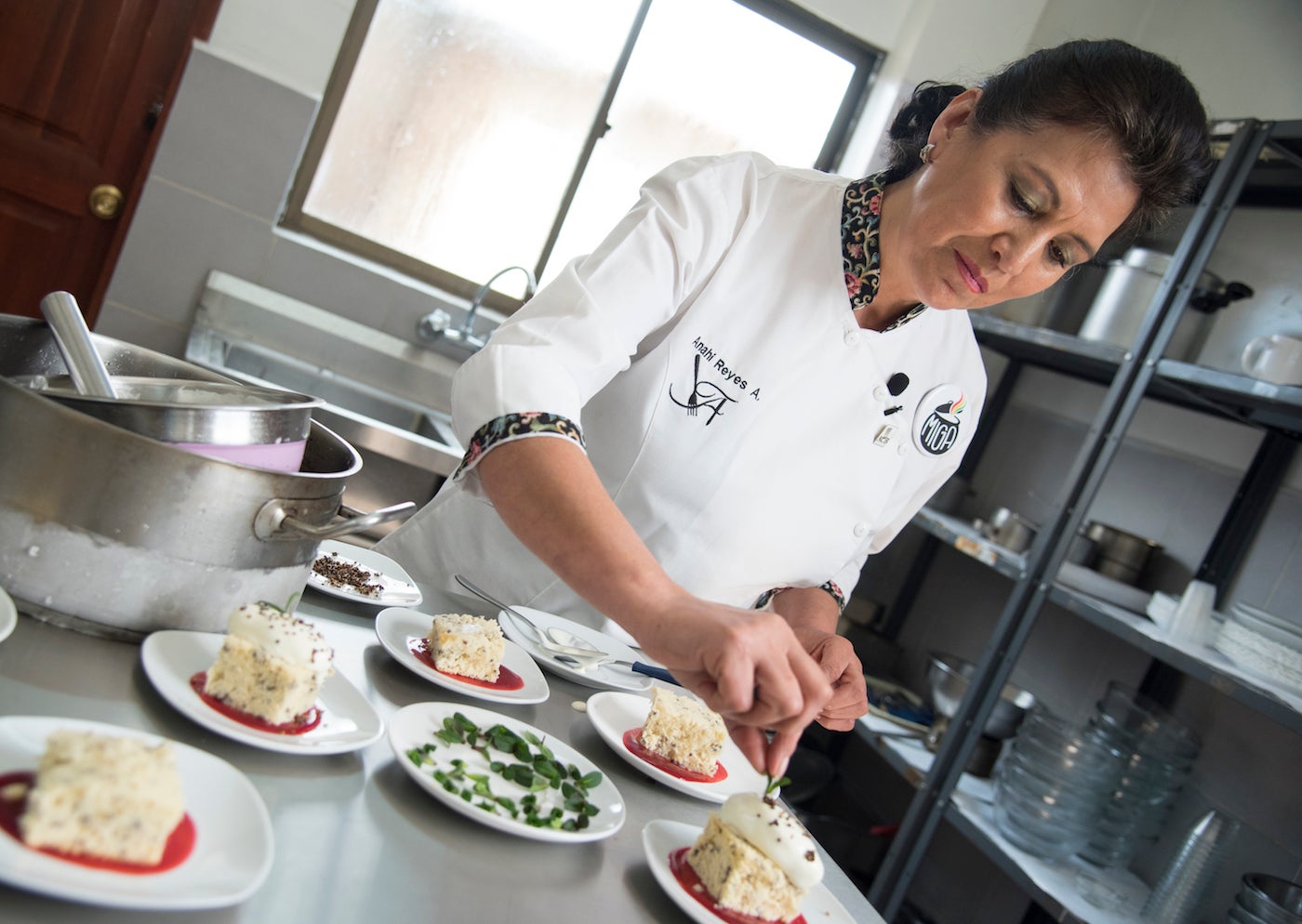 “It´s possible to promote a healthy diet by forming these synergies that start with the production of the food and go until it reaches our tables,” says Anahí. “It is possible to raise awareness about healthy, balanced recipes that improve Bolivians´ quality of life. We have food products with high nutritional value that can be grown right here and that can build people´s health.”