A HPV vaccination day in Brazil

The line for vaccination at the Municipal School Itamar Martins Ferreira, in Goiânia, capital of the state of Goiás, is long. Girls and boys (9 to 14 and 11 to 13 years old, respectively) wait to receive the second dose of the human papillomavirus (HPV) vaccine. The first dose was applied six months ago in the same place. 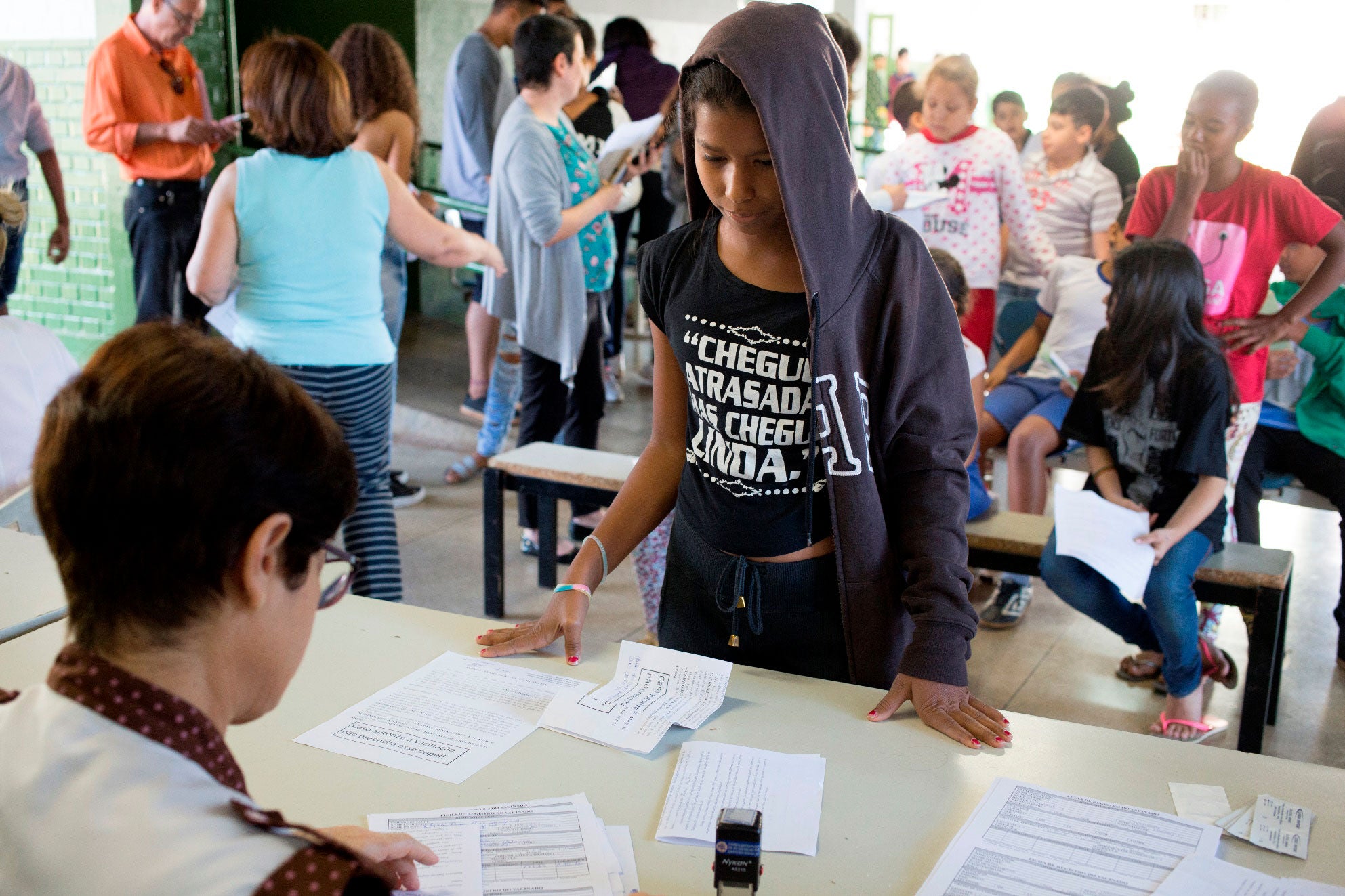 The initiative to meet the target population where they are is possible thanks to the partnership between the Municipal Secretaries of Health and Education, through the School Health Program (PSE) created in 2014. This mobilization facilitates vaccination against the virus that causes cervical cancer and other types of cancer.

In Brazil, the Unified Health System (SUS) has offered the vaccine against HPV since 2014 to girls aged 9 to 14 years. This type of cancer is the fourth leading cause of death among women in the country. Vaccination against HPV is, together with screening, the main tool to eliminate cervical cancer. However, to guarantee its effectiveness, two doses of the vaccine are needed, which must be applied at an interval of six months.

"Two years ago my aunt died of cervical cancer. After that, my parents told me about the importance of the vaccine"

HIV-positive women aged 9 to 26 also receive the vaccine, but in this case in three doses: the second dose after two months and a third dose six months later.

"Two years ago my aunt died of cervical cancer. After that, my parents told me about the importance of the vaccine" says Pâmela Pablino, 13 years old. From the loss of her aunt, she became aware of the possibility of preventing the disease.

While health professionals applied the vaccines, Marislei Brasileiro, the nurse of the Municipal Secretary of Education, spoke with several teenagers about the HPV vaccination and took the opportunity to respond to the most common doubts about the vaccine. She explains that, in that public school, two female students were chosen as "nurses"to the other students. "They are in charge of talking with their colleagues about HPV and its consequences, and of raising awareness about the importance of vaccination before starting sexual life," says Marislei.

The student "nurses" receive guidance through support material, prepared by the Municipal Education Secretariat, that includes relevant information on the subject: how the transmission of the virus occurs, the symptoms of the infection and when they occur, and how to prevent and treat it. "The student nurse has to be an open-minded person, who talks naturally with colleagues about HPV and cancer prevention," says Marislei.

One of the student nurses is Juliana Maciel Estôco, 9 years old. Her parents, Bernardete and Deilton, are proud of their daughter's commitment to share information that can improve the health of her classmates. "She has always been willing to take care of others, has a sense of natural responsibility and is very loving," says her mother.

Grecia Pessoni, immunization manager of Goiânia, affirms that vaccinating children and adolescents against HPV is still a challenge for public health. "In the beginning, in 2014, many parents showed prejudice, because they related the vaccination against HPV with a stimulus to initiate sexual activity. They said the vaccine could cause adverse reactions and spread several other rumors. " She says that, even with these obstacles, they continued to encourage campaigns in schools. The acceptance of the vaccine by children and adolescents was greater because "they are encouraged by their own peers." 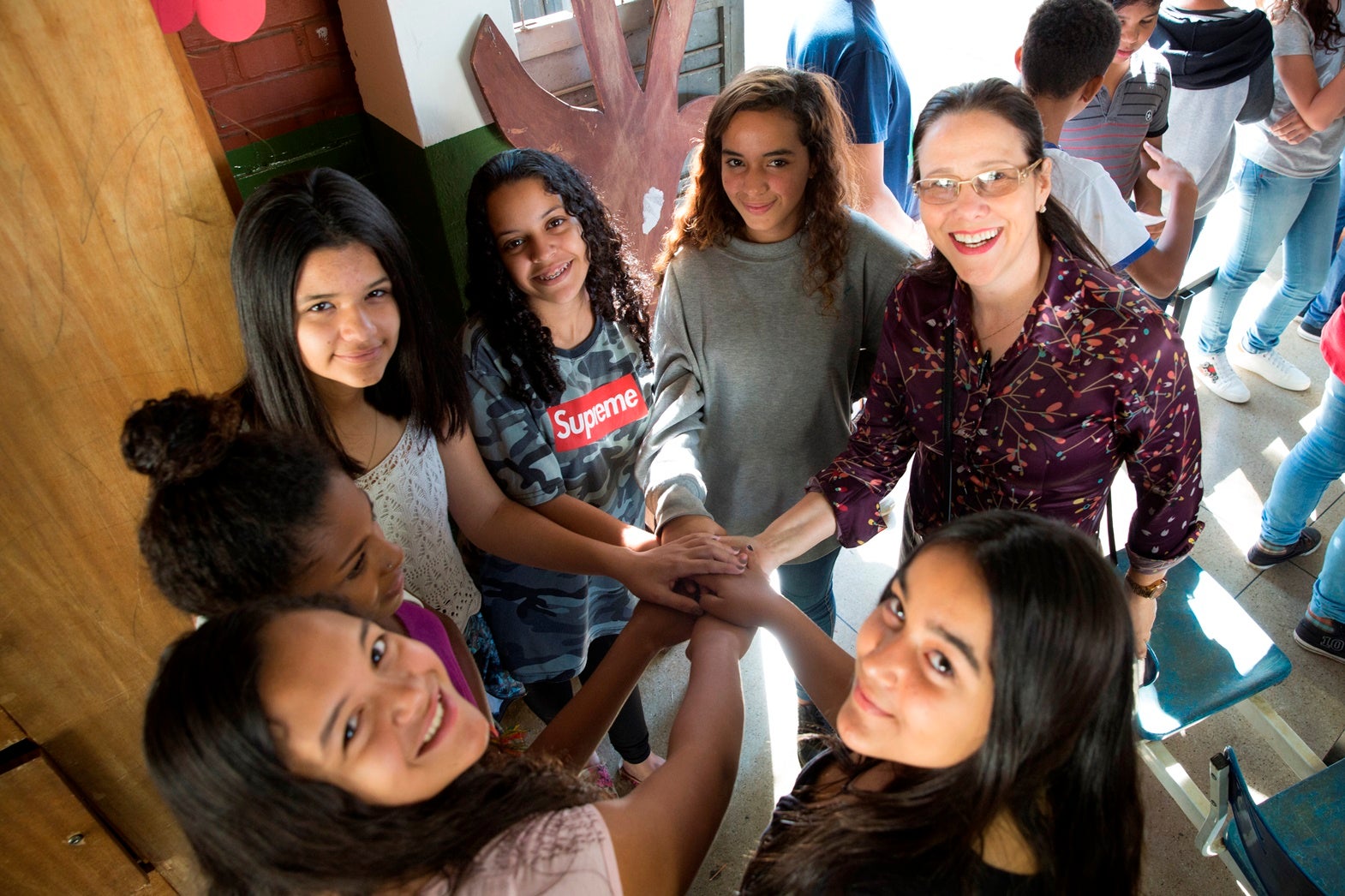 Marislei Brasileiro, talks with a group of teenagers about HPV vaccination and cervical cancer prevention. 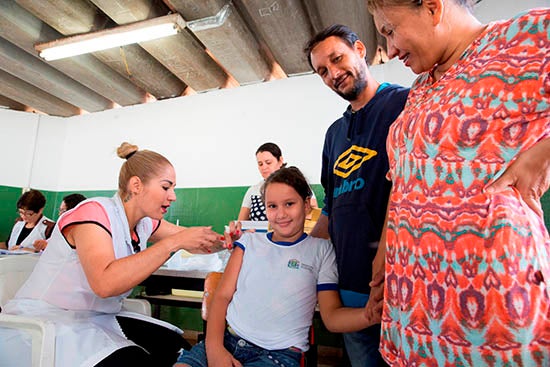 Juliana receives the vaccine with the support of her parents. She is one of the nurse girls designated by the school to talk with her peers about the HPV vaccine.