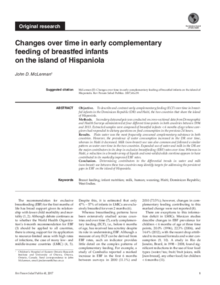 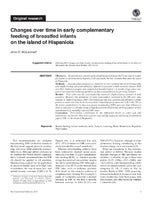 Objective. To describe and contrast early complementary feeding (ECF) over time in breastfed infants in the Dominican Republic (DR) and Haiti, the two countries that share the island of Hispaniola. Methods. Secondary data analysis was conducted on cross-sectional data from Demographic and Health Surveys administered at four different time-points in both countries between 1994 and 2013. Extracted samples were composed of breastfed infants < 6 months of age whose caregivers had responded to dietary questions on food consumption in the previous 24 hours.