This year´s theme of World Breastfeeding Week, from 1 to 7 of August, is "Protect breastfeeding in the workplace". 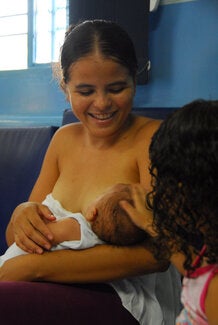 World Breastfeeding Week is an opportunity for the Pan American Health Organization to call on governments to continue their efforts to strengthen measures to protect, promote, and support the right to breastfeeding. These regulatory measures include the adoption and monitoring of the International Code of Marketing of Breast-milk Substitutes (the Code) and subsequent relevant resolutions of the World Health Assembly (WHA), implementation of the Baby-friendly Hospital Initiative (BFHI), implementation of a maternity rights policy compatible with the Maternity Protection Convention and Recommendations of the International Labor Organization (ILO), as well as providing specialized assistance and advice on feeding infants and young children.

Breast milk is the best food and the safest option to ensure good health and growth of young children. The World Health Organization (WHO) recommends initiation of breastfeeding within one hour of birth, exclusive breastfeeding for the first six months of life and continued breastfeeding for up to two years or beyond along with nutritionally adequate and safe complementary foods.

Pregnancy and maternity are an especially vulnerable time for working women and their families. Expectant and nursing mothers require special protection to prevent harm to theirs or their infants' health, and they need adequate time to give birth, to recover, and to nurse their children. At the same time, they also require protection to ensure that their jobs are not jeopardized because of pregnancy or maternity leave. Maternal Health Protection will help ensure women have equal access to employment and financial independence through their income and will contribute to achieve the global breastfeeding target for 2025 (increasing the rate of exclusive breastfeeding in the first six months to at least 50%).

Women who breastfeed their babies have a lower risk of breast and ovarian cancer, improved birth spacing, and may also have lower risk of diabetes and overweight/obesity. Breastfeeding protects children against morbidity and mortality due to infectious diseases. Breastfed children have a lower risk of dental malocclusion and have higher intelligence scores than children breastfed for shorter periods of time or not breastfed. There is also evidence that breastfeeding protects against overweight and diabetes.

In addition to the implementation of these policies, PAHO/WHO advises that governments should also implement maternity protection legislation and related measures consistent with the International Labour Organization's 2000 Maternity Protection Convention and Maternity Protection Recommendation. This Recommendation calls for at least 18 weeks of paid maternity leave for new mothers as well as paid breastfeeding breaks and hygienic facilities in the workplace.

This year during the celebration of the World Breastfeeding Week, the Pan American Health Organization wants to call on governments to endorse the International Labour Organization (ILO) Conventions and should ensure that the following measures are in place for maternity protection—ratification, implementation and enforcement of the terms  of the ILO Conventions through national legislation, ;widespread campaigns to inform employers and their female employees about their entitlements and the extension of protections to all employment sectors. 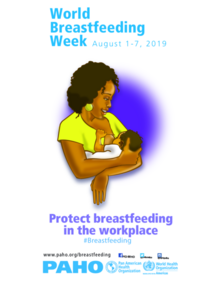 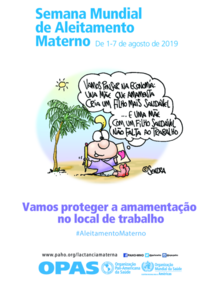 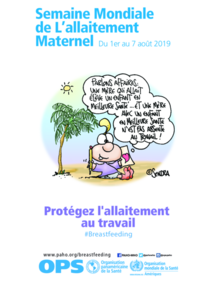