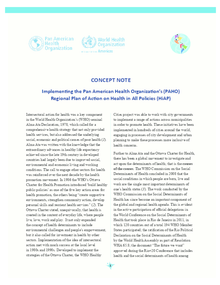 During PAHO’s 53rd Directing Council in September 2014, Member States adopted the Regional Plan of Action on Health in All Policies. The overall purpose of the Action Plan on HiAP is to define clear steps for implementation of the HiAP approach in the countries of the Region of the Americas. The Plan of Action corresponds to the WHO Health in All Policies Framework for Country Action, developed in January 2014 in a coordinated effort with countries in the Region of the Americas. The Plan contains strategic lines of action and indicators for the period 2014- 2019, in accordance with the objectives outlined in the PAHO Strategic Plan 2014-2019 (6a).