HIAP - Health in All Policies, from the Global to the Local 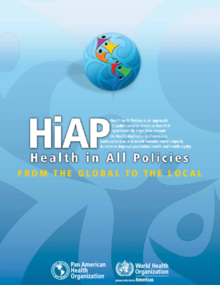 This paper outlines the core parameters of HiAP. While different countries and communities have varying operational views, the overarching perspective is that it is an innovative view of collaboration between the public policy-making sectors undertaken in good partnership. It can also involve action toward achieving greater health equity, synergy, accountability, and integration.

In the Americas, there is overwhelming evidence that intersectoral action drives HiAP and that the current social, cultural, economic, and political context is fertile ground for local government to embrace integrated action and policies on health and health equity. The PAHO strategy to promote an HiAP plan of action at each level of governance is timely and appropriate.