Launch of the Special Issue devoted to Tobacco Control

Launch of the Special Issue devoted to Tobacco Control

Join us on Thursday, 13 October 2022, for the launch of the Special Issue devoted to Tobacco Control, "Tackling tobacco control beyond health: a comprehensive approach", published in the Pan American Journal of Public Health. This event will be broadcast through Zoom.

About the Special Issue

Tobacco use is a common risk factor for the four main non-communicable diseases, claiming more than eight million lives globally every year and over one million lives annually in the Americas. Its effects are extensive and cross-cutting, including health, social, economic, and environmental. Encouragingly, there has been significant progress in combatting the tobacco epidemic in the Region of the Americas over the past two decades since the entry into force of the WHO Framework Convention on Tobacco Control (WHO FCTC) in 2005. Today, the tobacco control community celebrates significant achievements, such as the entire South American subregion being smoke-free in indoor public places and workplaces.

However, the work is far from over. There are still 128 million tobacco users (aged 15 years and older) in the Region –representing 10% of all global tobacco users– and current trends predict that if control is not urgently upscaled, around 118 million people in the Region will continue to consume tobacco by 2025. Further, the lack of an all-inclusive governmental and societal approach required to comprehensively tackle tobacco use, combined with tobacco industry interference, presents a significant barrier to moving forward with the tobacco control agenda. Additionally, new challenges, such as the bold industry marketing of novel and emerging nicotine and tobacco products, threaten to disrupt progress.

With tobacco use having an estimated global economic burden of $1.4 trillion US dollars annually, the impetus to act is strong. In the context of recovering global economies and the Covid-19 pandemic, tobacco use presents a significant threat to development at a critical time. Now, more than ever, working towards protecting gains and advancing progress, is critical. This special issue on tobacco control showcases an already strong foundation by highlighting achievements of actors across the tobacco control community, jointly with Member States. Furthermore, it demonstrates the devastating consequences and burden posed by tobacco use as well as the health and economic benefits of tobacco control. The scientific evidence presented helps shed light on where the Region of the Americas is now, and where it should be headed to tackle the tobacco epidemic and ensure the right of all people to the highest standard of health.

This special issue is possible thanks to the financial assistance of the Bloomberg Initiative to Reduce Tobacco Use. 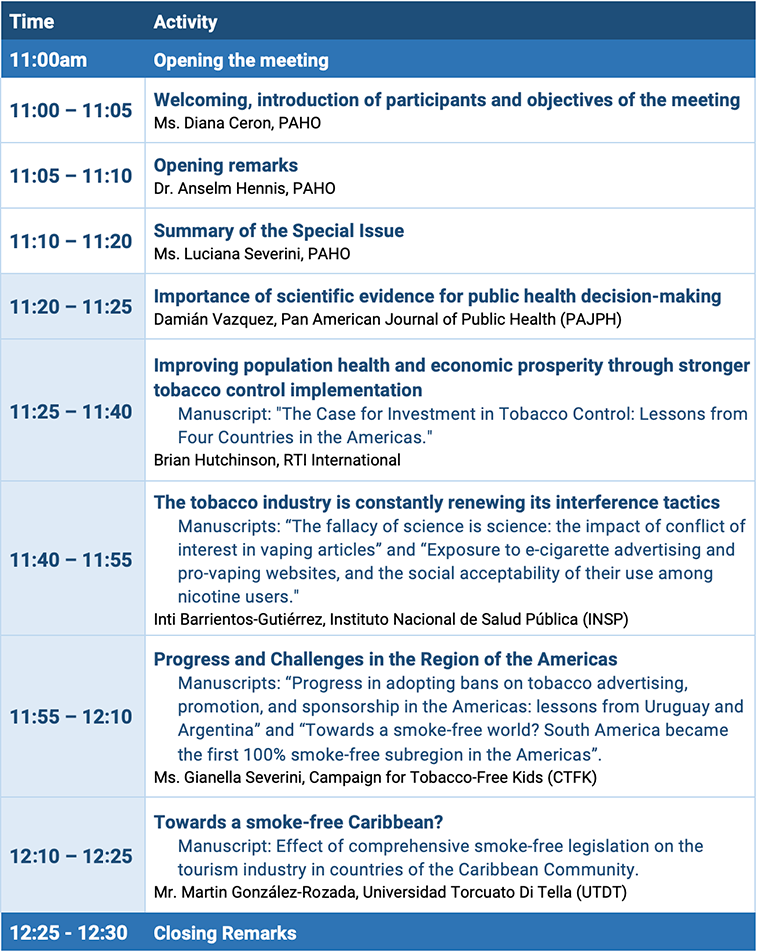 For other cities, check the time in the following link