A project of the National Zoonoses Control Program and the National Anti-Rabies Center of Paraguay was one of the winners of the call for proposals for the implementation of IS4H projects promoted by the Pan American Health Organization. The project "Strengthening the Rabies Epidemiological Surveillance System" aims to keep the cases of human rabies in Paraguay at zero, through epidemiological surveillance based on computer tools, in order to achieve timely and efficient health interventions.

In the development of the project, its executors want to obtain accessible epidemiological data to speed up the decision-making process; they also want to improve the epidemiological surveillance of rabies in the country; and they want to train the personnel responsible for 30 health establishments in the use of the VIGICAN computer tool. The purpose of this application is to capture the data of patients assaulted by rabid animals or exposed to the rabies virus and to inform the National Anti-Rabies Center, in the shortest time possible, to launch an early warning and identify the possible need for intervention with rapid response and coordinated multisectoral actions, based on reliable information. 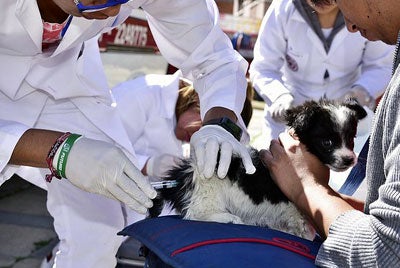 Dog being vaccinated against rabies.

The strengthening of rabies surveillance is of particular importance, and for that, information and communication technologies (ICT) are vital.

Currently the National Zoonoses Control Program and National Anti-Rabies Center -part of the Ministry of Public Health and Social Welfare - Paraguay- has been carrying out multisectoral actions for the intervention on rabies as a disease, with human and animal focus. Its main objective is to keep the cases of human rabies at zero. In addition, it has many other objectives related to the control of the zoonoses; to the availability of anti-rabies biologicals, as well as of the supplies and reagents, in addition to optimizing information systems and epidemiological surveillance.

The project is directed to society in general, to citizens vulnerable to zoonotic diseases, which mainly affect the poorest populations, those who live in rural areas or slums. It will also be very useful to health professionals and national decision makers in the field of public health.

The strengthening of rabies surveillance is of particular importance, and for that, information and communication technologies (ICT) are vital. From the project, a change of paradigm is proposed, based on technological tools and applied to the field of epidemiological surveillance of rabies at the country level.