The Dominican Republic has inaugurated the first Cancer Registry unit, located in the Department of Health Sciences of the Autonomous University of Santo Domingo (UASD), an important advance in the systematization of information that seeks to build an organized history of the new cases of cancer registered in the country. 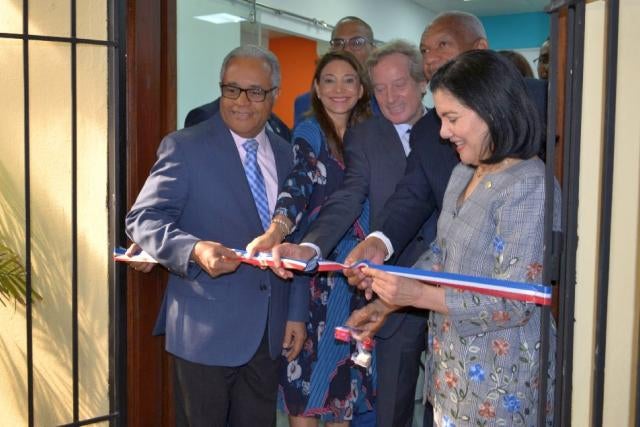 This project was one of the winners of the call for proposals for the implementation of IS4H projects promoted by the Pan American Health Organization.

According to the dean of the Faculty of Health Sciences, Dr. Rosel Fernández, the Cancer Registry unit will have different sources of information from health centers and it is expected that in the future it will be possible to estimate the incidence and survival of cancer, with ability to produce scientific evidence on clinical controls, prevention and research in specific groups.

The opening ceremony was held on 29 November 2019, and was headed by the UASD rector, Dr. Emma Polanco Melo; the Minister of Public Health, Dr. Rafael Sánchez Cárdenas; the PAHO / WHO representative in the country, Dr. Alma Morales; the French ambassador to the country, Didier Lopinot, along with the dean of the Faculty of Health Sciences, Dr. Rosel Fernández, to the director of first level of care of the National Health Service, Dr. Hilda Cruz, among other authorities.

Dr. Morales congratulated this effort and level of commitment assumed by the country in the fight against noncommunicable diseases, especially against cancer that represents the second cause of death in the Americas. Likewise, he reaffirmed PAHO/WHO's commitment to support this initiative and stressed that "today, the Dominican Republic joins the other countries that have made progress on this issue, by developing a cancer registry system that will allow capturing the new cases and thus have a tool that will allow us to make better decisions, design a strategic plan for care and be able to make cost projections."