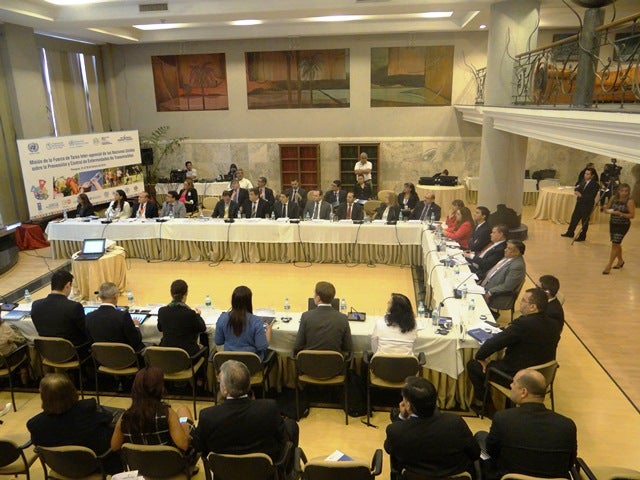 The United Nations Interagency Task Force on the Prevention and Control of Noncommunicable Diseases (NCDs) carried out a mission in Paraguay from 22 to 26 February 2016 to support the government in accelerating the implementation of actions to tackle NCDs - principally cardiovascular diseases, diabetes, cancers, chronic respiratory diseases and associated risk factors. NCDs cause almost three quarters of all deaths with nearly 1 in 5 people dying prematurely from NCDs in Paraguay.

At the moment, more than one third of adult males in the country are tobacco users and almost half of adult males report heavy episodic drinking. One-quarter of people are hypertensive, and nearly half of the population is overweight or obese. Consumption of salt, a key risk factor for raised blood pressure, is two to three times higher than recommended.

Paraguay is the second country in the WHO Region of the Americas to host a joint programming mission of the Task Force. The mission included representatives from the following agencies: International Organization of Migration (IOM), United Nations Development Programme (UNDP), United Nations Population Fund (UNFPA), United Nations Children's Fund (UNICEF), UNWomen, the World Bank, and the World Health Organization (WHO)/Pan American Health Organization (PAHO), which led the mission.
The Joint mission conducted a review and analysis of the NCD situation and national responses to date, through meetings with the Minister of Health and 15 other government ministers, high-level officials from central and local government, members of the Senate Commission on Health, development partners, as well as professional and academic associations.

The mission noted the high-level political commitment to NCDs in the country, with a strong basis for multisectoral, whole-of-government and whole-of-society response, with gender and lifecourse approaches.

The mission welcomed Paraguay's comprehensive national action plan, and noted the inclusive nature of its development with input from several government agencies, professional and academic societies. The mission noted that Paraguay has adopted realistic national targets for NCDs and their risk factors. These, along with robust data that document the prevalence of risk factors in the population and data on mortality, puts Paraguay in a good position for moving ahead on preventing and controlling NCDs and tracking the impact of its actions. 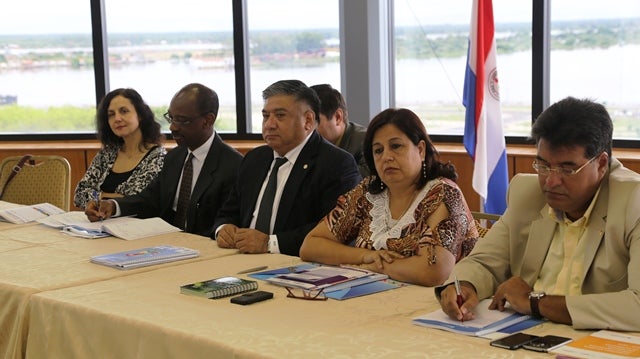 The mission welcomed the progress on tobacco control and the recent anti-tobacco law, noting that this forms a strong basis for the full implementation of the main measures of the WHO Framework Convention on Tobacco Control, ratified by Paraguay in 2006. It also noted the concerns expressed about the harmful impact of alcohol use, especially with regards to road traffic crashes and domestic violence. This highlights the need to put measures in place to reduce the harmful use of alcohol, including bans on advertising and promotion, taxes, and regulating availability of alcohol.

The mission highlighted the importance of healthy nutrition, and was pleased to learn of the advances being made by Paraguay through the school feeding program and the impending nutrition law. The mission acknowledges the national policies in place to restrict the marketing of breast-milk substitutes, in conjunction with policies and interventions to significantly increase  breast feeding rates. Overall there remains significant potential for the country to establish policies that encourage healthy diet and physical activity.

The mission noted the advances with strengthening primary care services for NCDs, through the USF (Unidad de Salud Familiar) and polyclinics. It noted the ongoing efforts to improve the availability of diagnosis and treatment of Paraguayans with NCDs. PAHO shared information about the PAHO Strategic Fund that could significantly assist the country with its procurement of high quality cardiovascular and cancer medications, and insulin at highly cost-effective prices.

The mission concluded that bolder measures are needed to address the epidemic of NCDs if Paraguay wants to meet the four time-bound commitments included in the 2014 UN Outcome Document on NCDs, and be on track to meet Sustainable Development Goal 3.4 of reducing premature mortality from NCDs by one third by 2030. If these actions are not undertaken at this juncture, the epidemic of NCDs will become an even greater economic, social and public health crisis.

Commited to an effective response to NCDs

The Minister of Health chaired a meeting of government Ministers during the mission to promote cross-government action for NCDs. "I am committed to seeing an effective response to NCDs across the government and I am pleased that we have the National Action Plan. We now need to turn this into action so that we can reduce the scourge of heart disease, diabetes, cancer and cancer in Paraguay. The findings of the Mission will help focus our response. The commitment of the UN to support us in the months ahead is very welcome." said Dr Antonio C. Barrios, Minister of Health of Paraguay. 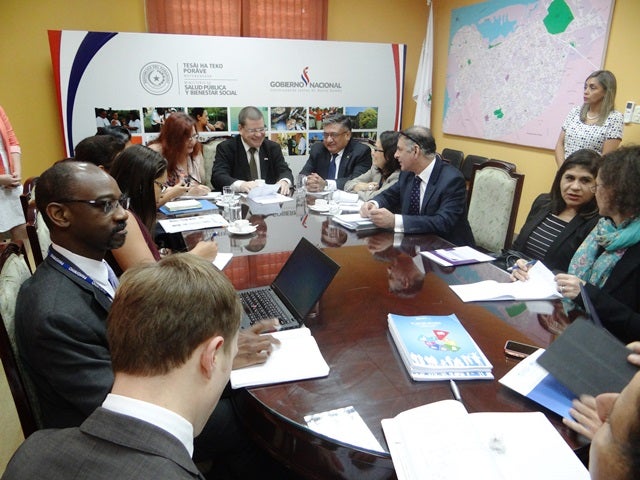 NCDs are central part to the international development agenda and are included in the Sustainable Development Goals, that were agreed in New York in 2015.  "Tackling NCDs is crucial for sustainable development and for ensuring that Paraguay reaches its full socioeconomic potential" said Mrs Cecilia Ugaz, UN Resident Coordinator. "I am committed to ensuring that the UN team here in Paraguay supports the government in its multisectoral response to NCDs".

The mission highlighted that Paraguay must invest urgently in the prevention and control of NCDs. "The international evidence is clear: the NCD epidemic is now having a significant drag on the economy of countries — and the same will be so for Paraguay. The economy is suffering from the costs of losing people to cancer and heart disease in the prime of their life",  says David Oliveira de Souza , Senior Health Specialist at the World Bank.

"We are committed to support the government in implementing its NCD action plan in order to reduce the number of people dying prematurely from NCDs." says Dr Carlos Castillo Solorzano, WHO Representative in Paraguay. "Strengthening the health care system to respond to ensure people with NCDs receive effective care is crucial and WHO is committed to provide support to the Government in this area", Dr Castillo adds.

The mission considered that the government must focus its resources on the most cost-effective interventions for preventing NCDs and managing patients affected by the diseases, including access to rehabilitation. "The key now is implementation of the national action plan, coordination of an effective response and to ensure accountability", Dr Hennis, Director of NCDs, PAHO, Washington DC says. "Full implementation of the recently approved tobacco law is critical so that Paraguay can reduce the untold harm that tobacco is doing to its people", Dr Hennis adds. "But there is also more that Paraguay needs to do to tackle NCDs. In our discussions with Government we have focussed on a small set of interventions that can be rapidly adopted, which are all evidence-based, cost-effective and feasible", Dr Hennis concludes.

Paraguay, along with all other countries has made a series of commitments to tackle NCDs at the United Nations in New York and will need to report back to the United Nations on progress in July 2017, in preparation for the third UN High-level Meeting on NCDs in 2018. "Now is the time to accelerate concerted action across government departments to strengthen national policies, and involve communities and the private sector in the implementation of those policies." says Dr Nick Banatvala from WHO in Geneva. The mission has raised the awareness about the existence of a number of best buy interventions for all countries, and has recommended that the government starts to implement these with immediate effect. "To ensure that the UN Agencies in Paraguay scale up their support for the national NCD response in a coordinated manner, the UN Task Force is recommending that the UN agencies in Paraguay establish a UN Thematic Group on NCDs. "This mission highlights the UN's commitment to support Paraguay respond to the growing crisis on NCDs", Dr Banatvala concludes. 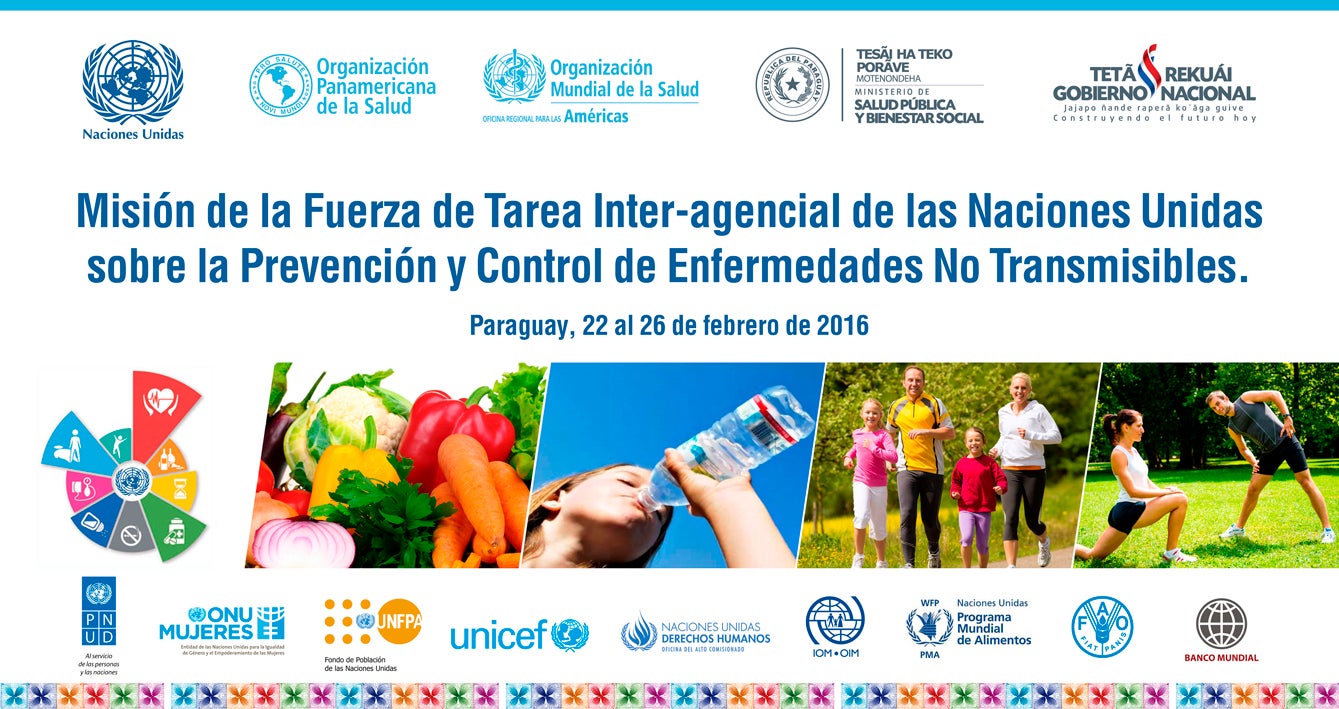