PAHO/WHO promotes safe, green and "smart" hospitals in the Caribbean 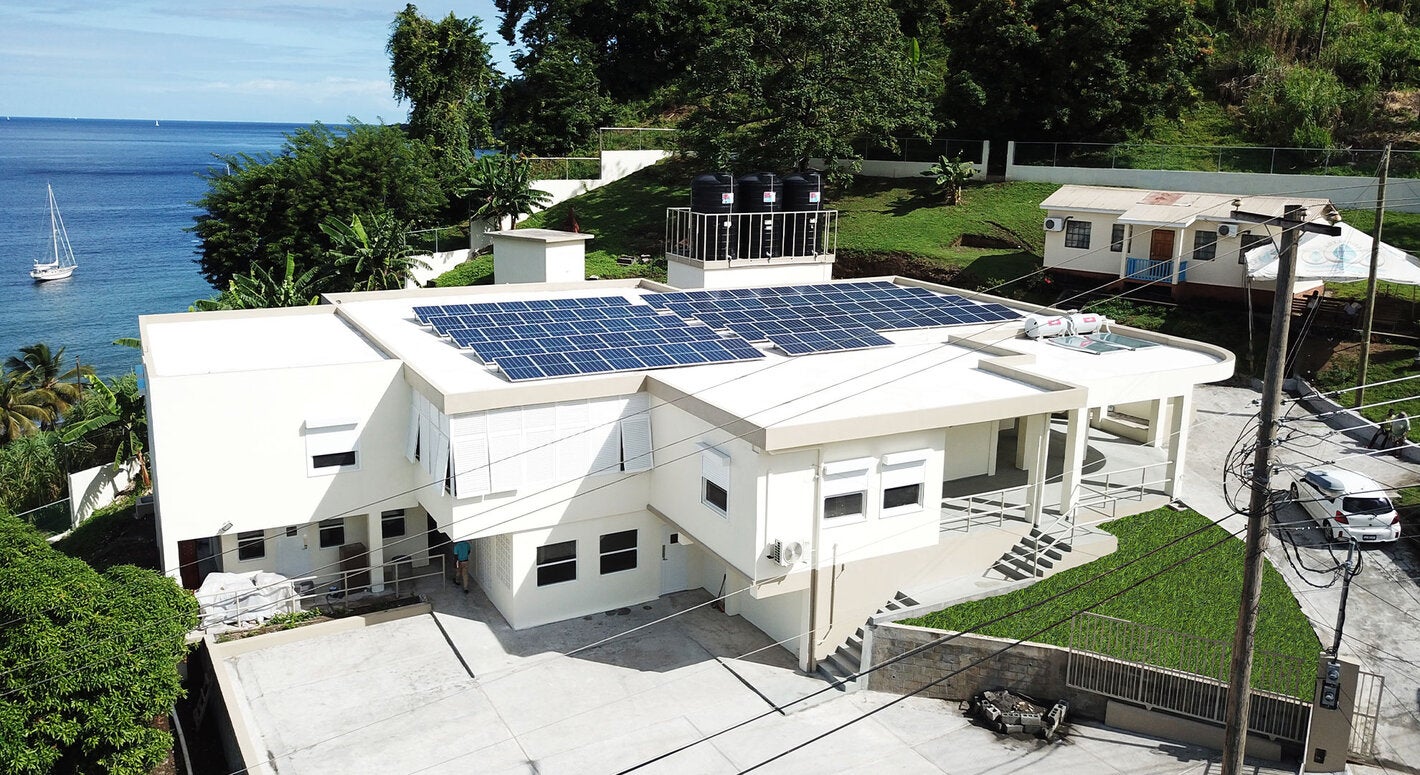 Washington, D.C., 10 September 2015 (PAHO/WHO) — Nearly 7 in 10 hospitals in Latin America and the Caribbean are located in disaster-prone areas, putting them at risk of becoming casualties themselves during hurricanes, earthquakes or flooding. To ensure that hospitals can continue functioning during disasters and to reduce their environmental footprint, the Pan American Health Organization/World Health Organization (PAHO/WHO) is promoting safe, green and "smart" hospitals in the Caribbean.

PAHO/WHO's SMART Hospitals program, a multi-year initiative financed by the United Kingdom's Department for International Development (DFID), this past June launched a new phase that targets a dozen hospitals in Dominica, Grenada, Saint Lucia, and St. Vincent and the Grenadines. When Tropical Storm Erika struck Dominica in late August, causing death and destruction, three hospitals on the island were in the process of being evaluated as part of the program.

"Natural disasters can have a major impact on the health sector and on people's lives, and we need to ensure that health facilities are built to resist disasters while also being environmentally friendly," said Dana Van Alphen, coordinator of the program. "A bonus is that hospitals that participate in this program also see their operating costs decline and produce less pollution."

A hospital is considered "smart" when it links structural and operational safety with green interventions, at a reasonable cost-benefit ratio. In "green" hospitals, air quality improves, water and energy costs decline, and people's working conditions improve. These improvements also affect users' decisions to visit health facilities: in hospitals that have adopted the SMART Hospitals program, the number of users seeking care has increased by 40%.

Participating hospitals have instituted measures including reinforcing their roofs and windows to resist hurricane-force winds, and installing new rainwater-collection tanks and solar panels to supplement their traditional sources of water and energy. Other measures include improvements in accessibility for people with disabilities, use of energy-efficient LED light bulbs, and replacing air conditioners with newer, more energy-efficient models.

To help health administrators implement the SMART Hospitals program, PAHO/WHO and a team of experts in public health, disasters, engineering, architecture, economics, energy and the environment developed a special toolkit that includes the Hospital Safety Index (a rapid-assessment tool for determining the probability that a health facility will be able to continue functioning in an emergency), a Baseline Assessment Tool (to collect information a building's performance and operations and how it measures up against current code, regulatory requirements and zoning regulations), and a Green Checklist (which outlines feasible areas where "smart" measures can be introduced).

The first phase of the SMART Hospitals program was carried out from 2012 to 2014 in hospitals in Georgetown, Saint Vincent and the Grenadines; and in Pogson, St. Kitts and Nevis, where structural safety and energy efficiency measures helped reduce water and energy costs, among other benefits.

Georgetown Hospital in Saint Vincent and the Grenadines was a participating hospital in phase one of the Smart Hospitals initiative. Built in the 1980s, the hospital currently provides care for some 10,000 people.

An initial evaluation revealed that the facility's roof had leaks that made it especially vulnerable to storms and hurricane-force winds. It lacked a water-storage system, and its plumbing and energy systems were antiquated, resulting in wasted energy and higher operating costs. Moreover, the hospital had no emergency energy supply.

As part of the SMART Hospitals initiative, health officials had the hospital's roof repaired, solar panels and a new water-storage system installed, its plumbing and energy systems renovated, and ramps installed to improve access for people with disabilities. The program also succeeded in improving working conditions and improving the healthcare environment.