Salt is the leading risk factor for hypertension, which affects nearly one in three people in the Americas

Washington, D.C., 17 May 2013—At least 30% of people in the Americas suffer from hypertension, or high blood pressure, for which excessive dietary salt is the main risk factor. For 1 of 3 people who have hypertension, cutting sodium intake can reduce their blood pressure to normal levels. Reducing dietary salt could also prevent an estimated 25% of heart attacks and strokes worldwide. 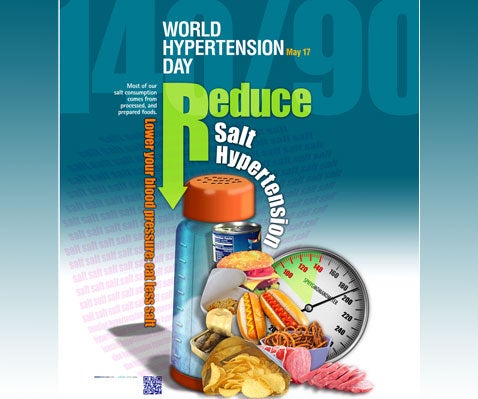 "High blood pressure is a treatable condition and can be prevented by lifestyle changes, especially through lower salt intake and more exercise," said Pedro Orduñez, regional advisor on cardiovascular disease at the Pan American Health Organization/World Health Organization (PAHO/WHO), on the occasion of World Hypertension Day, 17 May.

Reducing salt intake at the population level is the most cost-effective public health intervention to reduce hypertension. PAHO/WHO recommends consuming less than 5 grams of salt—or 2,300 milligrams of sodium—per day. In the Americas, salt intake is double that: nearly 11 grams per day in most of the region's countries.

Although people add salt to foods during preparation and at the table, a larger proportion of the sodium people consume is through processed, canned, and ready-to-eat foods, noted Branka Legetic, interim coordinator of PAHO/WHO's Prevention and Control of Chronic Diseases project and head of the Salt Reduction Initiative. One option that consumers can take is to avoid these processed foods and instead focus on foods that are fresh, natural, and free of added salt.

Hypertension—blood pressure equal to or higher than 140/90—is not just an issue of personal behavior, however. Policy changes and multi-sector action are also important to shape the environment in ways that facilitate healthy eating.

"All sectors of society need to participate. Legislative bodies can adopt laws to protect the health of their populations, and governments can strengthen the work of their regulatory authorities and promote incentives to create healthy environments in schools. Dining halls and cafeterias in companies and government institutions can offer food with less sodium, and the food industry has the responsibility of reformulating products to reduce salt," said Orduñez. He added that the role of civil society is equally important in advocating for healthy public policies and monitoring compliance with established regulations.

This year's World Health Day (7 April) was dedicated to hypertension. WHO issued a call to intensify efforts to prevent and control high blood pressure, which is the main risk factor for cardiovascular deaths and is estimated to affect more than 1 in 3 adults worldwide, or some 1 billion people.

Many people could improve their eating habits by selecting products with lower sodium levels. Reading and understanding food labels can help consumers evaluate nutritional content as well as the amount of salt in foods.

Experts recommend comparing labels from different products and selecting those that have less than 15% of the daily recommended sodium intake.

Foods in the Americas that typically contain more salt include bread and other bakery goods, soup cubes, processed meats, sausages, cheese, prepared and canned foods, soups, snacks (such as French fries), and sauces.