Changing health risks and interventions due to earthquakes and hurricanes 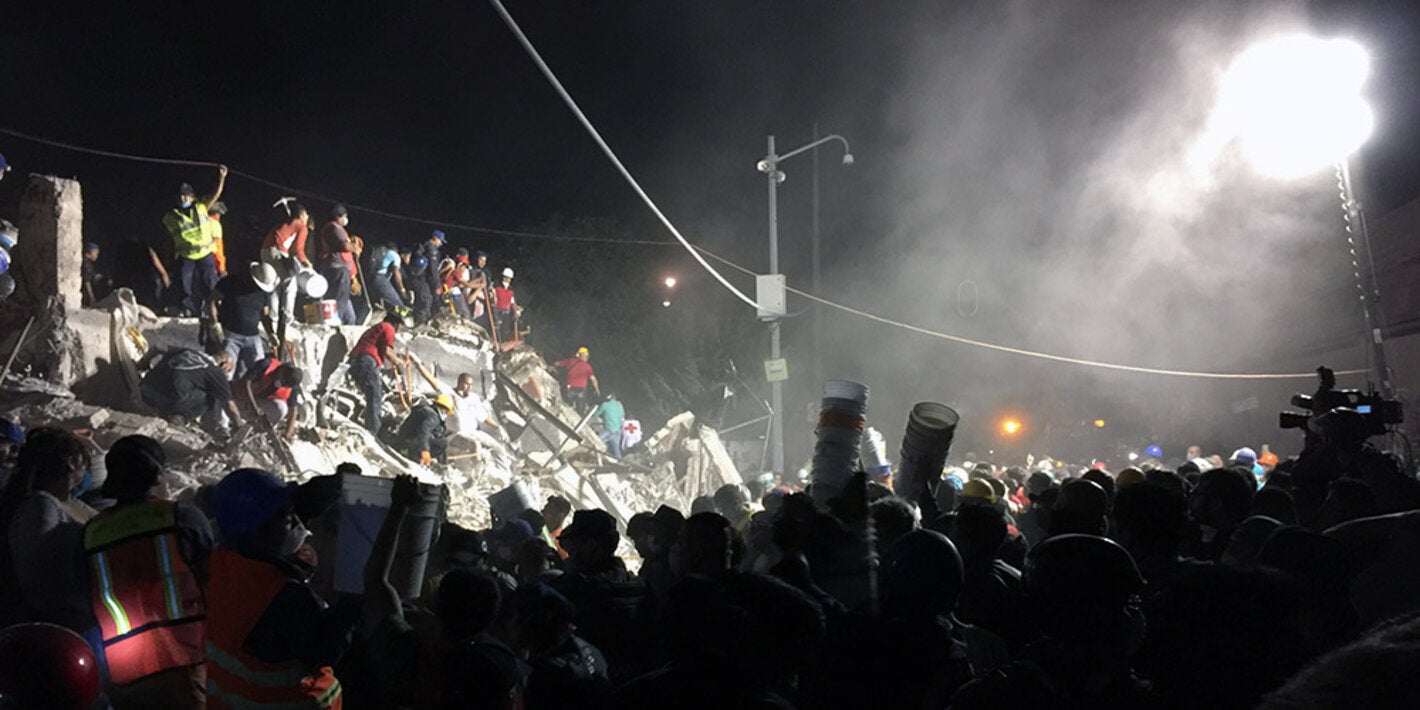 Washington, Sept. 21, 2017 (PAHO/WHO) - The Pan American Health Organization's Disaster Task Force is now dealing with the aftermath of two high magnitude earthquakes in Mexico and two category 5 hurricanes in the Caribbean, working to support health authorities in affected countries in dealing with the health aspects of the emergencies.

An earthquake of 7.1 on the Richter scale struck Mexico near Puebla Tuesday afternoon, collapsing many buildings, causing at least 249 deaths, and leaving some 1,800 persons hurt.  It followed a Sept. 7 earthquake in the south of Mexico, about 400 miles away, which measured 8.1 on the Richter scale.  Mexico reported that none of the 94 health facilities in Mexico City suffered severe damage and that all of them carefully or partially operational, although 45 buildings in the city collapsed and some more are in very bad condition.

In a Disaster Task Force meeting today, PAHO staff received updates from staff in the Caribbean working to help the islands and territories affected by Hurricanes Maria and Irma, and from the PAHO office in Mexico, which is working with health authorities there.

"Our team was able to arrive in Dominica yesterday carrying medicines and supplies and walked to the hospital, where they verified that it is partially operational with 101 patients, but critical services like dialysis and blood services are not working," said Dr. Ciro Ugarte, head of PAHO's Health Emergencies Program. He said staff is working with the help of several military services and other partners.

Medical supplies are being distributed and experts are assessing the damage in Dominica, where they estimate 85 percent of homes have been damaged and water and food supplies are scarce. Some 20 deaths and many injured were reported from Dominica, and PAHO staff is working to coordinate evacuation of patients that need urgent dialysis for treatment, possibly to the Dominican Republic.

Ugarte noted that local staff is providing urgent health care, and PAHO is identifying areas where additional help is needed and deploying experts in several fields to assess and help the countries impacted by the hurricanes.

"Health is a central factor in these emergencies, whether they are earthquakes or hurricanes. The risks are different and we have to adapt the approaches to country needs," Ugarte said.

In the affected Caribbean islands, food, water, and medicines are vital, and so is early detection of any disease outbreaks, whether due to inadequate sanitation in shelters or increases in disease vectors like mosquitoes and rodents, he added. Loss of electricity affects health centers and hospitals and impedes timely care for some patients as well as storage and distribution of vaccines, Ugarte noted.

Ugarte noted that health systems in Mexico and in the Caribbean have been working to strengthen their hospitals and make them safe before disasters, using PAHO's Hospital Safety Index and other tools, and that work has been successful in avoiding damage from natural hazards and allowing the hospitals to keep functioning.

In response to an appeal to donors, the United Kingdom's Department for International Development (DFID) has contributed 2.5 million Pounds Sterling to support urgent needs in the Caribbean, including  restoring access to critical health services in affected areas, increasing epidemiological surveillance in light of the heightened risks of water-borne, vector-borne and rodent-borne diseases, ensuring access to safe water and proper sanitation and hygiene in affected areas, and logistical support and coordination of humanitarian assistance.