Paraguay interrupts vector transmission of Chagas in the home 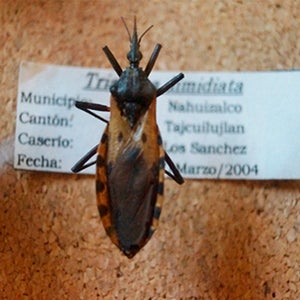 Asuncion/Washington D.C, 7 August 2018 (PAHO/WHO) - Paraguay has succeeded in interrupting the vector transmission of Trypanosoma cruzi in the home, the parasite that causes Chagas disease. This was verified last week by a group of international independent experts convened by the Pan American Health Organization (PAHO).

There are now 18 countries in the region, including Paraguay, that have achieved this on a national level or in part of their national territory where the disease is endemic. In the Region of the Americas, there are 21 endemic countries. There are around 30,000 new cases of Chagas each year, and 14,000 people die as a result. In addition to this, there are more than 70 million people who live in areas where they are at risk of contracting the disease.

"Given the social and economic conditions that Paraguay has faced throughout the years, the fact that the country has been able to eliminate one of the primary sources of infection, is a great example for other countries also fighting against this disease," said Luis Roberto Escoto, PAHO representative in Paraguay. He also highlighted the challenges that the country must now overcome in order to maintain elimination, including epidemiological and entomological surveillance, as well as the need to direct efforts towards the elimination of mother-to-child transmission.

PAHO's International Evaluation team for Chagas Control found that vector transmission of Trypanosoma cruzi by Triatoma infestans in the last area of the country affected by the disease, and the one for which vector control had been the most problematic - the Presidente Hayes district in Chaco, had been interrupted. This achievement has enabled Paraguay to obtain certification for eliminating vector transmission of this disease in the home.

"Paraguay has a history of sustained efforts over a period of decades, which has led to very important results," said Roberto Salvatella, PAHO advisor and member of the Chagas evaluation committee. "As a result, and thanks to the country's continued progress, an international evaluation was requested to certify the interruption of Chagas transmission by "kissing bugs".

The mission report, which was delivered to the Paraguayan health authorities on August 3, recognizes the country's vector prevention and control efforts that have been sustained over a period of decades.  The report also highlighted the country's ability to interrupt vector transmission in Chaco; the importance of community participation in eliminating transmission; and the work of the National Chagas Program in providing guidance, supervision and evaluation for each action. The expert group also emphasized that actions, including vector control and surveillance, must continue in order to maintain this achievement.

The experts were particularly pleased to highlight the efforts made by the country to prevent transmission of the disease via blood transfusions, through the universal screening of blood donors. They also emphasized the "pioneering role" of Paraguay for its timely and effective treatment of those with congenital Chagas.

Chagas is a potentially deadly parasitic disease caused by the microorganism, Trypanosoma cruzi. It is transmitted to humans by insects known as kissing bugs, as well as via blood transfusions, organ transplants, during pregnancy and childbirth, and by consuming contaminated foods.

It is estimated that in the long term, up to 30% of those with chronic disease can develop complications which, in turn, can have severe and irreversible consequences on the nervous system, the digestive system and the heart. However, if Chagas is detected early and during its initial phase, it can be cured or improved. During the chronic phase, treatment can slow or delay its progress.

Links- Protecting achievements; expanding diagnosis and treatment; and preventing mother to child transmission - All vital elements of the fight against Chagas
- Neglected Infectious Diseases in the Americas: Success Stories and Innovation to Reach the Neediest
- PAHO: Chagas Disease Website