Colombia, 6 August 2019 (PAHO)—Carmen Osorio was 16 years old when she first helped a pregnant woman who was about to give birth. “I was passing by and a lady called out to me, saying: 'ay, girl, my husband took off for the bush so I have to go through this by myself.' I told her I didn’t know what to do, but she insisted that I help her and a baby girl came out. I cut the cord and was no longer afraid,” she recalls. Carmen is now 58 and has attended 1,037 births.

This woman is one of the traditional midwives who participated in the trainings offered by the Pan American Health Organization (PAHO) to increase health care access and improve the quality of care for mothers and newborns in the Chocó Department of Colombia, where maternal and neonatal mortality rates are twice the national average.

According to Bremen de Mucio, Regional Maternal Health Advisor at PAHO’s Latin American Center for Perinatology, Women and Reproductive Health (CLAP/SMR), traditional midwives are the first ones to help women in remote communities where health centers are not accessible, which is why contributing to their training may protect women's health and save lives.

Chocó, located in the northwestern part of Colombia, witnessed the domestic armed conflict that took place in the country over the last sixty years. It currently has one of the highest rates of poverty (49.9%) and extreme poverty (17.5%) in the country. A total of 115,981 people live there, of which 83% are Afro-descendants, 12% are indigenous, and 5% are mestizos or whites.

A highly dispersed population, the high degree of rurality (51%), and weak infrastructure are some of the factors that explain why it is so difficult for pregnant women to access health services and receive timely care. The question has been how to address the problem of high maternal and neonatal deaths in an area with these characteristics.

The project, financed by the Canadian government, had a human rights and equity-based approach, and focused on being culturally appropriate and sensitive to gender issues.

De Mucio said the scientific evidence shows that the vast majority of maternal deaths can be prevented with proper management and knowledge of existing technologies. Community participation and better emergency obstetric and neonatal services have been the greatest achievements of the project, which was launched two years ago.

Cilia Perea is very content with the work she does as a nurse specializing in gynecology and obstetrics in the San Francisco de Asís Hospital in Quibdó, the capital of the department of Chocó. Cilia says that there was one day on the job she will never forget, when a pregnant woman came in with placental abruption.

“The baby was born preterm, at 35 weeks, but thanks to the training we’d received, we managed to divide the team into two groups: those of us on the mother’s team inserted a Bakri balloon (a cost-effective technique that is used to reduce postpartum hemorrhage), and the other team coordinated the services of a pediatrician who arrived at daybreak and was in charge of the newborn’s care, following protocols for premature babies. A few days later, both mother and child were able to go home.

Cilia says that quality has improved considerably now that the entire staff has these tools, compared to before when these resources were not available.

Strengthening health care systems by improving the skills of health workers was in fact the objective of the first phase of the project launched by PAHO in Chocó. The second phase focused on working with the community to learn about their needs and adapt the project accordingly.

The project first worked on empowering the family, the community, and community partners. Different dialogue sessions were organized (with women of childbearing age, men, adolescents, and community leaders) to hear their opinions on health topics of interest to them.

“Dialogue is one step in the empowerment process, the idea being that the same people that participate in it will take ownership of what was discussed,” said Ana Ligia Molina, coordinator for the Enfants du Monde organization in Latin America, which was crucial to the work in the community. 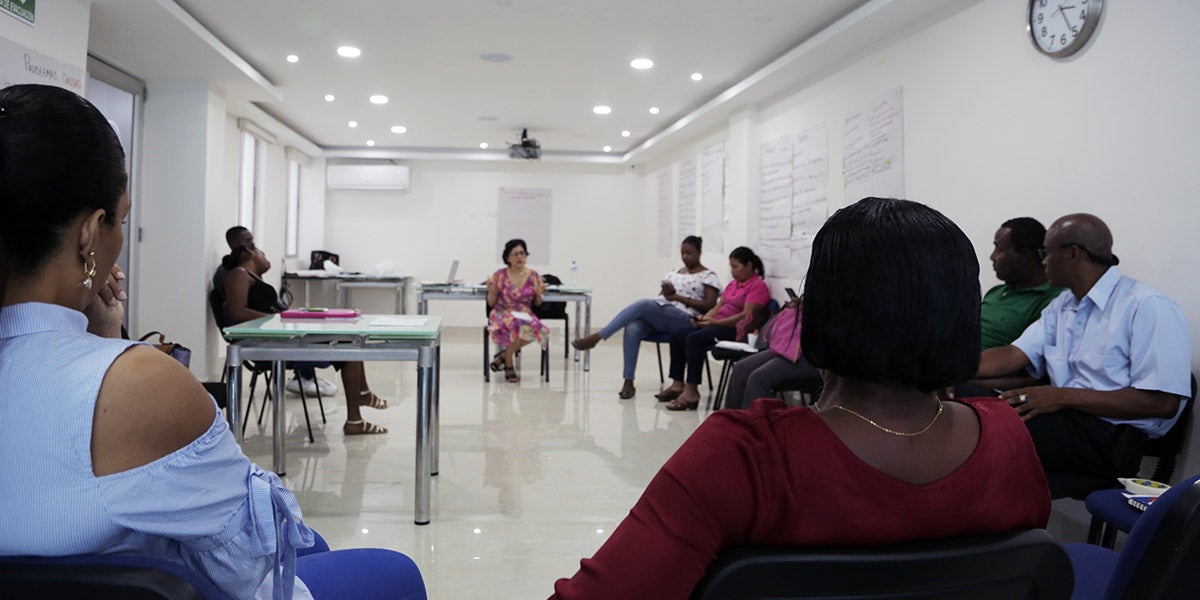 One of the 60 participants in the dialogue session with women was 36-year-old Yurledys Ramírez. Yurledys has two children and was born in Quibdó. She lives with her children, mother, siblings, nieces and nephews in a house located in Niño Jesús, a humble neighborhood with dirt roads on the banks of the Caví river. Yurledys works in another family’s home in the morning, and in the evening she pays a ‘rapi’ (motorcycle taxi, which is the most common type of transportation in Quibdó) to take her to the university, where she studies child pedagogy.

This Chocoan resident believes that the work that has begun in the community will pay off: “We get together with other women here to see what problems have been affecting health in the community. I realized in the workshop how important it is for pregnant women to have checkups to see if the baby is doing ok,” she said. 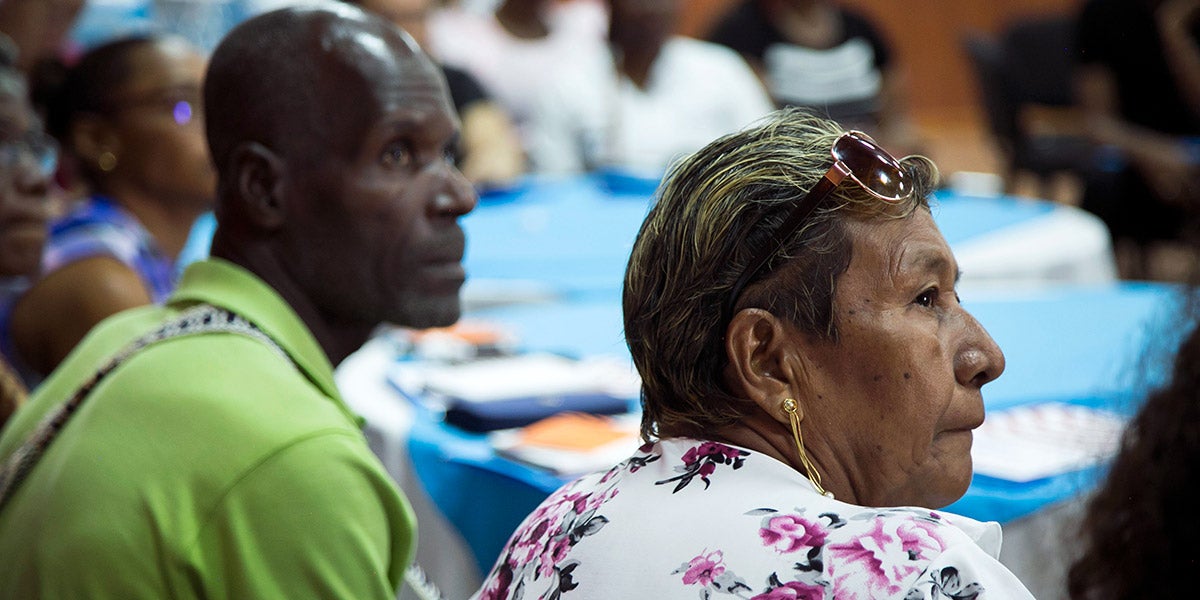 Manuel Gil of the Save Chocó Committee was one of the community leaders that facilitated the sessions. “We are protecting the health of pregnant women and their children, which is a responsibility of both the family AND the community. We’ve made progress. Today we know that women have the right to a birth attendant. This is a major achievement in terms of equity and rights,” said this leader, who is widely known in Quibdó and is the person the locals turn to when they need help.

Residents also see midwives, which is why working with them has been key to bringing healthcare institutions to the community and vice versa. Luis Mosquera is one of the few men who works in this field. He is from the community of Angostura, in the municipality of Tadó. Luis feels it is essential to have people who can deliver babies when you live in remote areas where there are no doctors or nurses.

“There are more facilities now than before, and our daughters are already being referred to the hospital. We ask any women who have signs of risk or are first-time mothers to go there,” he said. One successful outcome of the trainings has been that community leaders understand the importance of recognizing the warning signs and preventing risks, so that women can be quickly transported to the health center. 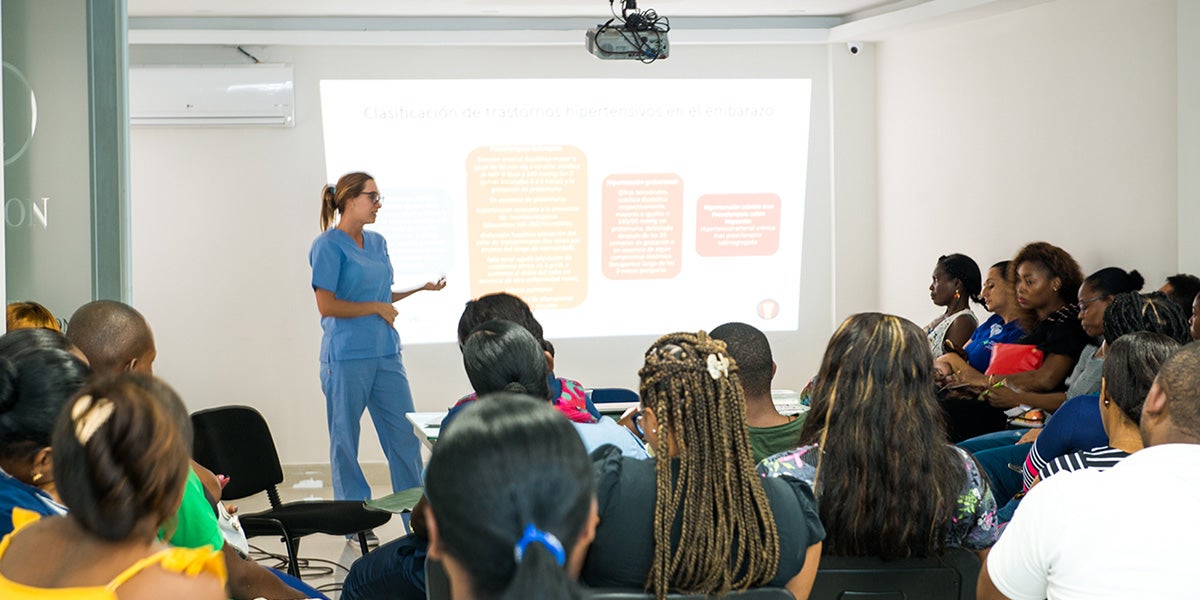 For Dr. Andrés De Francisco, director of PAHO’s Family, Gender, and Life Course Department, traditional midwives in regions such as Chocó play a very important role in reducing maternal mortality. “This project shows that we can indeed work with the communities and midwives to improve health. We hope this will be an example that can be replicated in other areas,” he said.

In addition to PAHO/WHO, CLAP, and Enfants du Monde, other partners involved in the project were the Colombian Federation of Obstetrics and Gynecology (FECOLSOG), the Intensive Care and Obstetrics Research Group (GRICIO), and the Colombian Neonatology Association (ASCON). Colombia’s Ministry of Health, the Departmental Secretariat of Chocó, the Municipal Secretariat, healthcare providers and the traditional midwives association were key participants in the development of the proposal.