Casa Masantonio: A safe space for tuberculosis treatment in Argentina

Casa Masantonio assists people in situations of extreme vulnerability, including those with histories of drug abuse and complex illnesses. The organization focuses on peer therapies with previous patients that have already completed treatment.

I‘ve lived on the street since I was 10 years old, smoking “paco” (coca paste), until I came to “die” in this neighborhood. But I didn’t die. I’m alive! And now I work with young people in hospitals, farms, communities and the neighborhood. This is my home. I am happy and I feel love like I’ve never felt before– said Lucas Algañaraz with a look of happiness in his eyes.

Lucas is one of the former patients and peer supporters at Casa Masantonio, a support facility for people in situations of extreme vulnerability that reside in shanty-town settlements in Buenos Aires, and that are addicted to paco and have complex diseases, primarily tuberculosis (TB), HIV and other sexually-transmitted infections.

“We consider ourselves to be a different type of treatment center where we try to identify the barriers that prevent a patient from accessing treatment. We then find creative ways around these barriers in alignment with the strategic pillars of the PAHO/WHO End TB strategy,” states Santiago Jiménez, medical coordinator of Casa Masantonio.

“For example, if we have a patient who is homeless and does not have any ID, which prevents us from carrying out a sputum smear test to detect whether or not they have tuberculosis, we try to coordinate with a health care center to find a way around this. We look at how we can carry out a test, ensure that they receive treatment and monitor them on the street if they do not wish to attend a health facility,” added Jiménez.

The facility focuses on ensuring that patients are treated and have access to medication. It also seeks to find those people that have not yet been diagnosed and ensure that they are tested. Since 2016, it has worked to identify and overcome the barriers that patients face which, many times, result in them getting discharged from the formal health care system when the complexity of their social situation leaves it unable to respond to their needs.

Masantonio shows that when those people who are left out of the healthcare system and who have ended up in dreadful situations with dreadful consequences, are properly supported, they can achieve great results because not only are they cured but they are also trained to become an agent of change for others. People who know first-hand what it is like can really help in working towards the elimination of tuberculosis

The key to this initiative is peer support - the social aspect of the program is just as important as the medical aspect.  The participation of former patients who have already completed their treatment and have become peer supporters, is a fundamental part of the model. This peer support is one of the reasons why the initiative has achieved such high rates of adherence to treatment: of 75 patients with tuberculosis looked after by the center, 81.4% have successfully completed treatment.

According to Gustavo Barreiro, President of the Cooperative to help Paco users, “Masantonio shows that when those people who are left out of the healthcare system and who have ended up in dreadful situations with dreadful consequences, are properly supported, they can achieve great results because not only are they cured but they are also trained to become an agent of change for others. People who know first-hand what it is like can really help in working towards the elimination of tuberculosis.”

The cooperative belongs to the organization Familia Grande del Hogar de Cristo, a network of centers led by a group of priests that worked in shanty-town settlements. This network was founded in 2008 by the then Cardinal Jorge Bergoglio, who would later become Pope Francis.

Casa Masantonio works in coordination with the local health system to facilitate access to diagnosis and treatment. It receives support from Argentina’s Ministry of Health as well as the Buenos Aires Ministry of Health, the Labor Secretary and the Ministry of Social Development to ensure the provision of medicines and other needs.

The initiative seeks to tackle tuberculosis, a serious public health problem in the region of the Americas, where there are approximately 270,000 cases and 23,000 mortalities each year due to the disease. In Argentina, 10,423 new cases of tuberculosis were reported in 2016. This represents a sustained increase over 4 consecutive years, particularly among younger people.

“We provide our patients with a ray of hope so that they don’t infect other people. We support young people that are living in the street and cannot attend hospital because of drug use, by providing them with medicines, food and helping them to develop the skills they need to look after themselves,” said Oscar González, a former patient, and peer supporter at Casa Masantonio. 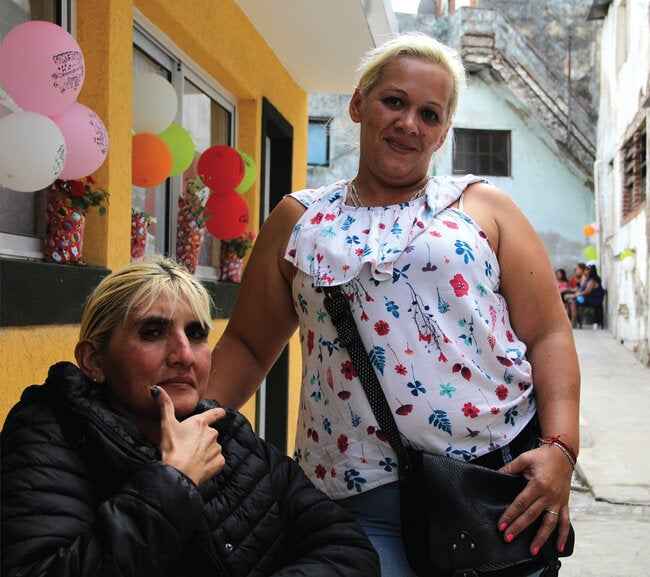 Another of the peer supporters, Lourdes Duarte, agreed. “It is really satisfying to help others. Beyond the fact that there is a small incentive for us, through the cooperative, the biggest gift is being able to help others.”