Eliminating endemic hepatitis B and D in Ayacucho, Peru

ELIMINATING ENDEMIC HEPATITIS B AND D

Update: As the story was being published, on 18 December 2018, Peru's Ministry of Health approved new national guidelines for the prevention, diagnosis, and treatment of hepatitis. The new guidance includes the use of rapid diagnostic tests for screening and diagnosis and pan-genotypic direct-acting antivirals for the treatment of hepatitis C (HCV) available to all those living with HCV, in line with WHO recommended guidance. With an estimated population of 220 000 people living with HCV, the new guidelines will make it possible for patients to access hepatitis C cure at US$4 500 or less as opposed to the previous price of over US$10 000. The policy is hoped to lead to even further reductions in such high prices, as the treatment had become much more affordable in many other regions of the world.

Child vaccination programs are beating endemic hepatitis B in Ayacucho and a new elimination plan now seeks to address the remaining challenges around how to support people who are already chronically infected.

Photo (above): The child’s mother has been living with hepatitis B, but was able to ensure that her child is hepatitis B-free as he was vaccinated against the infection at birth.

Huanta, an Andean city located in the north of the province at around 2600 meters above sea level, was hardest hit by the epidemic. Some 8% of deaths in the city at the time were linked to chronic liver disease, including fulminant (severe and sudden) hepatitis, cirrhosis and hepatocellular carcinoma.

To tackle the problem, the National Health Institute – which is part of Peru’s Ministry of Health (MINSA) – with support from the Pan American Health Organization (PAHO) and the World Health Organization (WHO), and with active participation from community organizations, carried out a pilot in 1994 to assess the effectiveness and feasibility of an HBV infant immunization programme.

The evidence was clear. Consequently, HBV vaccination was included in Peru’s national vaccination programme, which was rolled out progressively across the country, reaching universal access in 2003. The prevalence of HBV in individuals younger than 20 in Huanta is now rare, with no current reports of HDV infection.

Despite the success of the infant immunization programme, there is still the challenge of high rates of liver disease from chronic hepatitis among the rest of the adult population. While HBV can be prevented through vaccination, life-long treatment is needed for those with severe liver disease (cirrhosis) or older individuals with high viral loads. And 30% of all cases of HBV reported in Peru’s national notification system originated in Ayacucho, as of September 2018.

In 2017, key stakeholders mobilized support from MINSA, regional political leaders, and health leaders and providers in Ayacucho, to set up a demonstration project to address hepatitis beyond immunization through a regionwide elimination plan for hepatitis B.

The elimination plan includes birth dose vaccination of newborns; prenatal testing and interventions to prevent transmission from pregnant women with HBV to their infants; and diagnosis, treatment, and follow-up for chronic HBV carriers.

In 2017, PAHO provided an elastography machine to Huanta Hospital to facilitate the staging of liver disease among patients. Between 2016 and 2017, the number of HBV tests increased from 31 829 to 52 294. Tenofovir-based HBV treatment is now available for people with chronic infection; however, delays getting HBV DNA results (which need to be sent to the capital, Lima) present a challenge for timely initiation of treatment and continued engagement with those who need treatment.

In the coming year, testing and treatment will be expanded to other sites in Ayacucho. Additional considerations include increased access to rapid tests, multi-disease testing platforms such as GeneXpert, and improved algorithms for faster linkages between diagnosis and treatment.

In October 2018, PAHO Hepatitis unit and PAHO Country Office in Peru worked together with Peru's National HIV, STI and Hepatitis programme, regional health leaders to conduct a review of the regional plan and progress towards elimination in Ayacucho. Findings from the review will inform potential improvements to the implementation and replication of the plan to other regions of Peru. 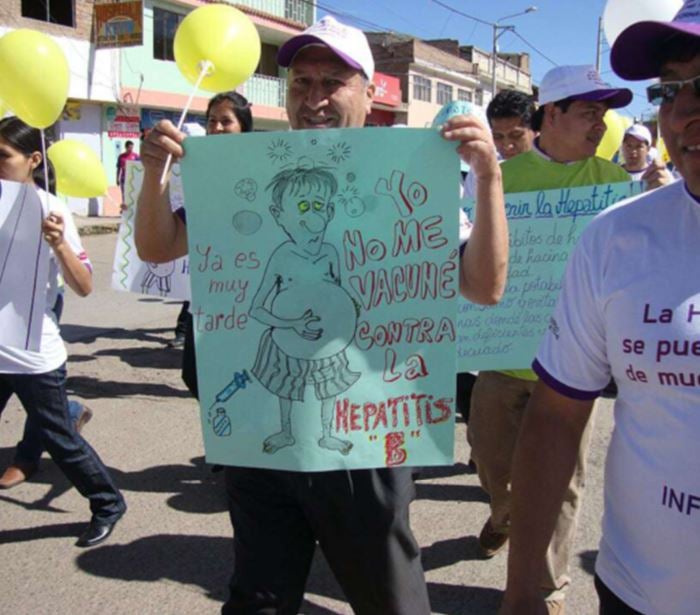