“I’m cured!” A story about overcoming hepatitis C in Argentina

For World Hepatitis Day, Diego Villoldo relates how he overcame the hepatitis infection. A journey from despondent resignation to a new lease of life.

A STORY ABOUT OVERCOMING HEPATITIS C IN ARGENTINA

Buenos Aires, July 2019 (PAHO/WHO)—“I’m cured,” said Diego Villoldo with a big smile after getting the results of his treatment for hepatitis C, which he received at a hospital in the city of Buenos Aires. Diagnosed in 2007, it had been a long and at times rocky road, but within three months the new revolutionary treatment allowed him to look toward a bright new future now devoted to his interest in music.

When I found out that I had hepatitis C, I started drinking and resigned myself to live however many days of life I had left.

“I am a luthier. I make string instruments, so I have always been connected with music through my work, but I started to think more seriously about what I want to do. I knew that I wanted to play music, so that’s what I’m doing,” said Diego, who works in a shop in the Buenos Aires neighborhood of San Telmo.

Today, he says that he has always looked forward in life, but a few years ago all that changed dramatically when recieved his diagnosis. “When I found out that I had hepatitis C, I started drinking and resigned myself to live the however many days of life I had left, but a year later I had an accident where I fell from the second floor and was in intensive care for 11 days. I left hospital with a new lease of life knowing that I had gotten a second chance,” he recalls.

It was during that journey he started to research what treatment options were available to overcome hepatitis C. “In 2012 I began a very rough, quite aggressive treatment where I had to give myself injections, but it was not successful,” said Diego, who is also involved in the Asociación Buena Vida, a viral hepatitis support group that meets in the Cosme Argerich Hospital in the Argentine capital.

Several hepatitis patients meet there every week to share their experiences and expectations regarding treatment. In fact hepatitis is an inflammation of the liver. There are five types of the virus (A, B, C, D, and E) that can cause acute and chronic infections, resulting in liver inflammation that can lead to cirrhosis, liver cancer, and even death. 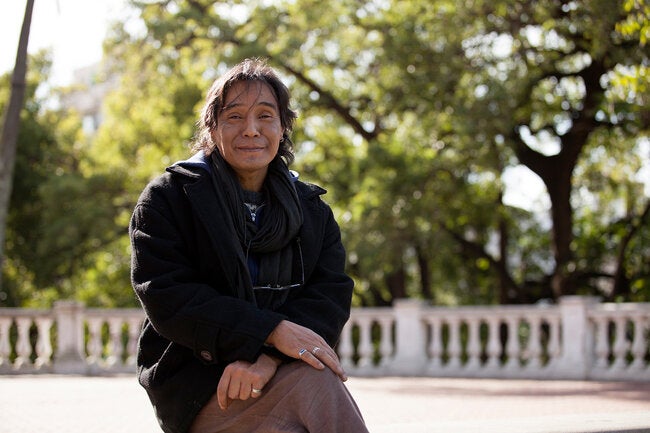 Hepatitis C is transmitted through contact with infected blood, as well as from transfusions of contaminated blood products, organ transplants, or invasive procedures (such as injections or tattoos with reused needles). It can also be transmitted through sexual contact, although this is less common.

Viral hepatitis B and C, which affect 325 million people worldwide, are among the infectious diseases that cause the most deaths, but the majority of world leaders and the general public are unaware of their existance and public health impact. Currently, the global goal is to eliminate viral hepatitis as a public health problem by 2030. It is estimated that of all people living with hepatitis C, only 19% have been diagnosed, yet over 95% of infected individuals can be cured if they receive proper treatment.

In 2012 I began a very rough, quite aggressive treatment where I had to give myself injections, but it was not successful.

In Argentina, an estimated 332,000 people have the hepatitis C infection, but only 35% have been diagnosed, according to data in the report Hepatitis B and C in the Spotlight issued by the Pan American Health Organization (PAHO).

The Secretariat of Health in Argentina prepared a Strategic Plan 2018-2021 with PAHO’s support, which is in line with the Regional Plan of Action for the Prevention and Control of Viral Hepatitis 2016-2019 and is consistent with the overall goal of eliminating hepatitis by 2030 under the Sustainable Development Goals. In that context, Argentina is promoting testing, preparing recommended treatment guidelines, and since 2016 has been supplying direct-acting antiviral drugs for hepatitis C, which has helped 4,176 patients receive curative treatment.

In Diego’s case, several years passed from his initial diagnosis until just a few months ago when he was notified that he could begin the new treatment for hepatitis C, which lasted three months and was “more or less tolerable.” The outcome was what they had hoped for: tests confirmed that his viral load was negative – he had been cured.

This difficult “journey through the hospital as well as life in general” that he had to go through after receiving his diagnosis had finally come to an end.

Diego, now 50, says that help from his family and friends was key. He also said that a positive outlook, no longer being “resigned,” and his desire to “evolve spiritually and as a human being” also played a great part.