Orinoco Expedition: bringing health to the deepest reaches of the Venezuelan Amazon

PAHO organizes three trips each year in Venezuela to bring vaccination and health services to 22 indigenous ethnic groups living deep in the tropical forests of Amazonas state, in the southernmost part of the country.

For the 22 indigenous ethnic groups living in the Venezuelan state of Amazonas, visiting a health center is a complex challenge.

Some of the villages, embedded in the thick tropical forest, are located eight days away by boat  from the nearest health care centers, a journey that, in addition to being difficult, is unaffordable.

Health workers who travel to these areas are among the few officials to reach these remote territories, near to the borders with Colombia and Brazil.

From the Piaroa community of Caño Grulla in Autana, Rosales Castillo, says he is overjoyed every time he sees the health crews arrive:

I have lived here for twenty years, twenty years without electricity, but at least it is good to know that someone remembers us.

The Pan American Health Organization (PAHO) organizes these trips during the rainy season, between July and November, when the communities are easier to reach via the the Orinoco River. The trips enable  the Venezuela Ministry of People's Power for Health (MPPS in Spanish) to provide vaccines, and services for the diagnosis and treatment of malaria, onchocerciasis (river blindness), trachoma and intestinal parasites.

The second of this year's trips began on September 17. Four bongos - artisanal fishing boats – departed from the port of Samariapo, in Autana, where the last paved road in the south of the country is located.

Planning logistics for a fifteen-day trip on the Orinoco and i is no easy task and requires: 6000 liters of gasoline, four boats with a capacity of 5000 kgs each, 12 outboard motors, 1000 kgs of food, five power plants, four freezers, as well as sailing permits from the Port and Tax Authorities.

Each bongo carried 17 people and covered different municipalities of Amazonas: one went to Alto Orinoco, another to Manapiare, another to Rio Negro and Maroa and a last one to Autana and Atabapo. They carried more than 32,000 doses of routine vaccines and 7,000 doses of the COVID-19 vaccine.

The Orinoco, which means "a place to paddle" in the Warao language, expands to more than 20 kilometers wide in some stretches.

In its 2,100 course towards the Atlantic, the river crosses rainforests and savannahs, passes pink dolphins (known as toninas), and giant caimans. But this is not a trip to be idealized. 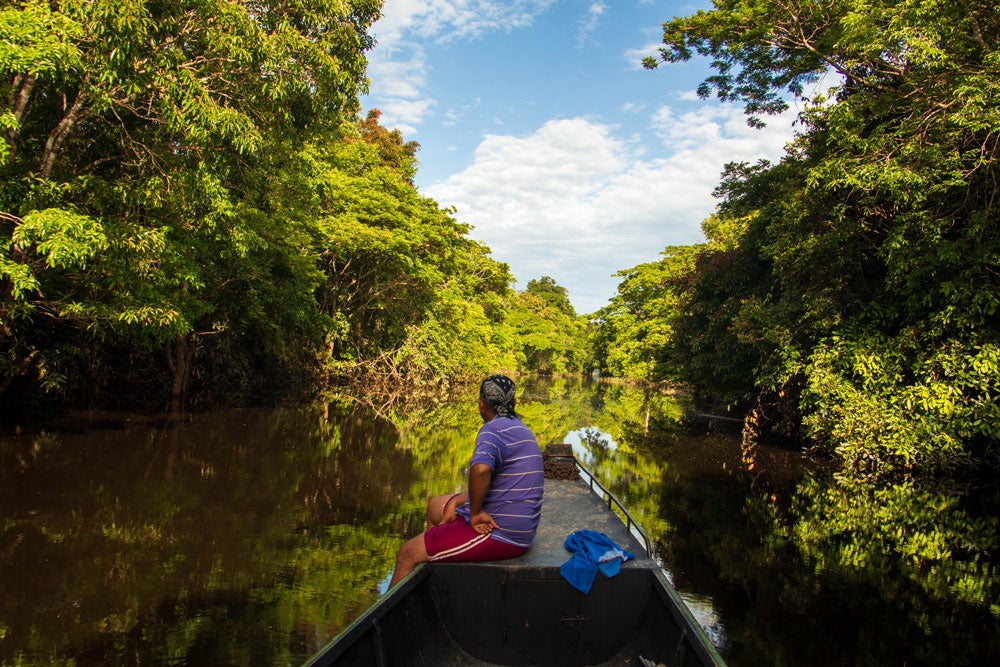 "Most people don't know that inside Venezuela there are communities that are eight days’ travel away,” said Vicente Baretta, who supported PAHO in the expedition. “Organizing a journey like this presents problems that cannot be imagined from the outside, such as the need to buy new freezers for each trip, because fifteen days spent wobbling around in a boat usually renders them unfit for use again,”

Carrying excess wight on the boat is not an option so Baretta ensures that everything has been well calculated. He knows they must bring eight cartons of 30 eggs per bongo, that the chicken, fish and meat will last less than a week, and that during the last eight days crew members must survive on canned food.

And although the weight of each boat is about five tons, the boat that travels to San Carlos de Río Negro must carry a heavier load as the trip is longer, with stronger currents, and its crew members will have to spend a consecutive three days and  nights on board. 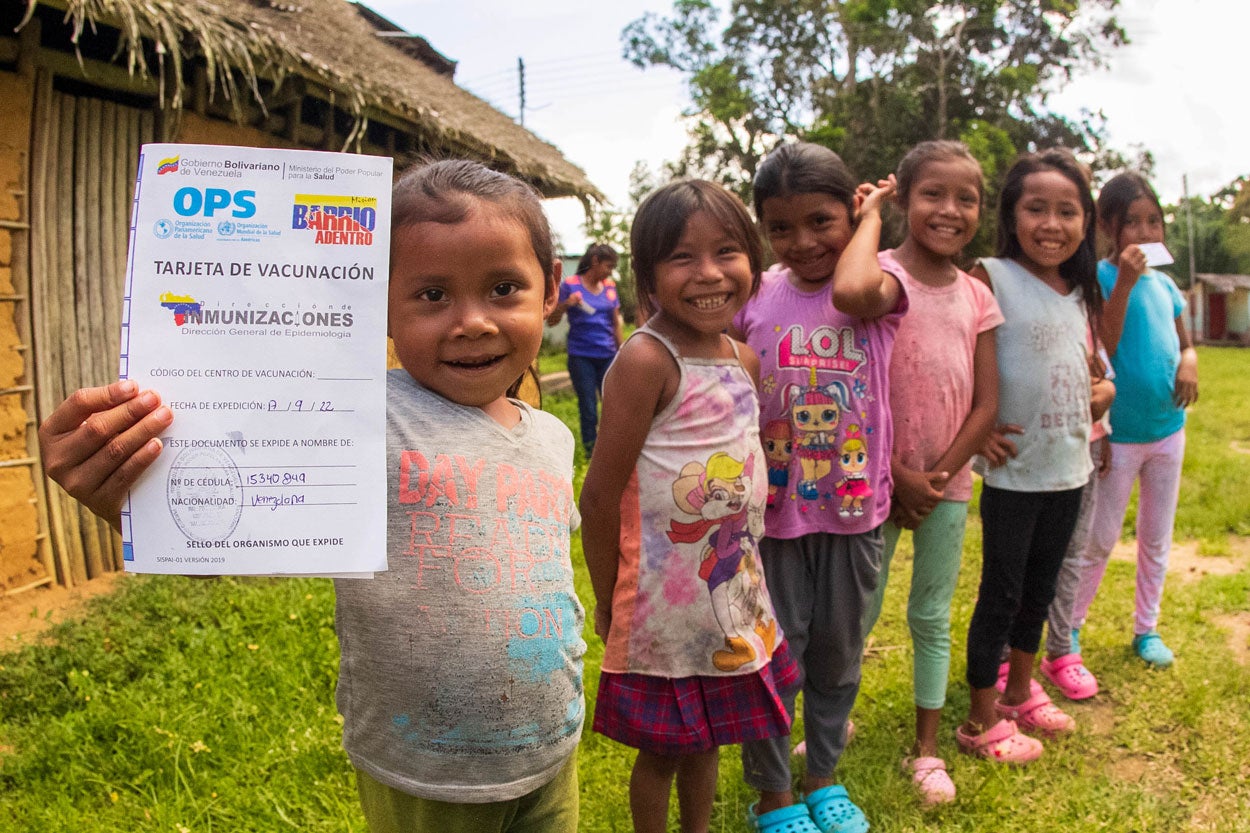 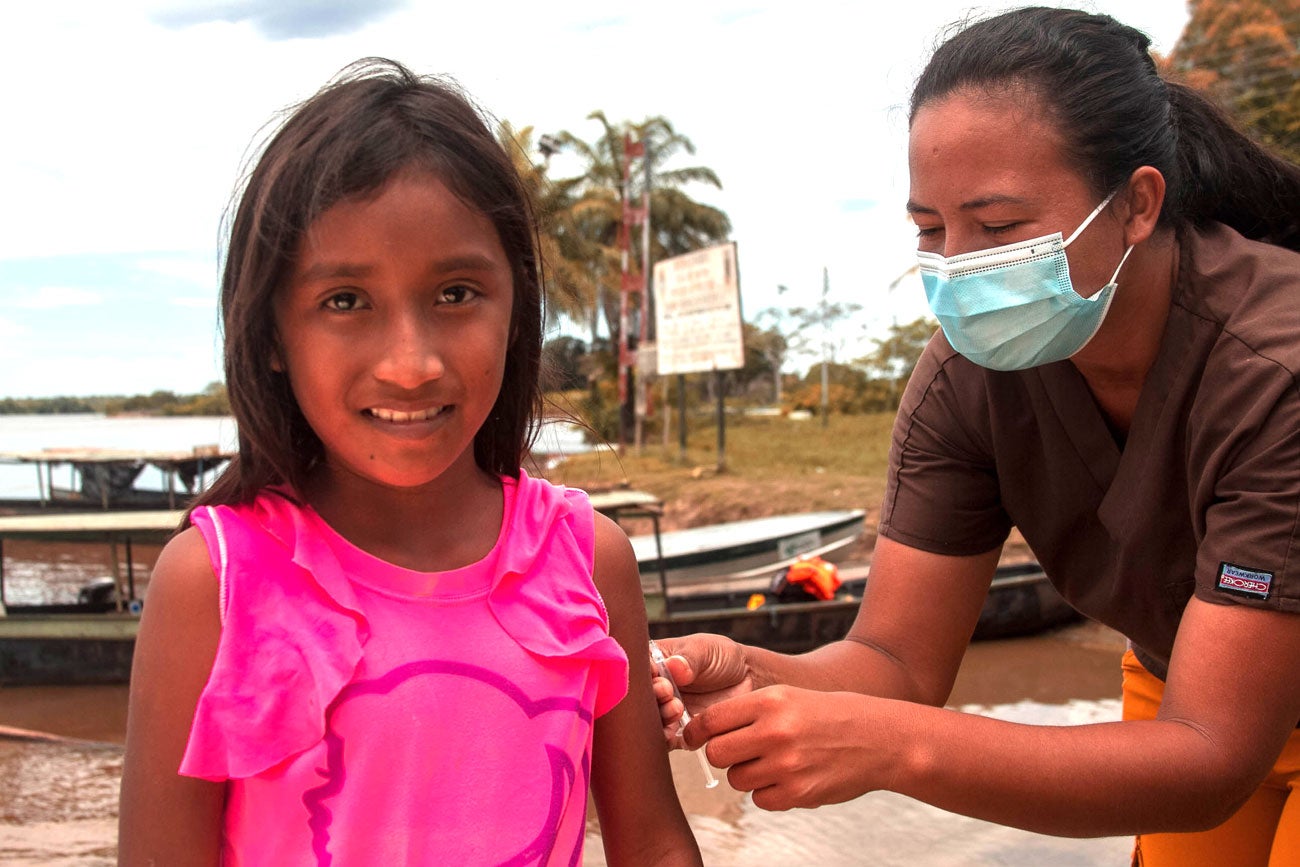 Ministry staff often rely on translators to communicate with the indigenous leaders, known locally as “captains” of the community.

Health workers who belong to these ethnic groups often facilitate the organization of these expeditions, as well as the arrival at the various communities receiving health services.

Teodoro López, a Yekwana indigenous person, is one of the vaccinators who traveled to San Carlos de Río Negro, and believes he knows the Amazonas very well: he was born in the Toky community, in the Marawaka parish of Alto Orinoco, and although he currently lives in the capital of the state, Puerto Ayacucho, he has vaccinated people from all 22 ethnic groups of Amazonas during his 24 years of work. His experience goes back to when he accompanied his father, who was also a nurse, on similar trips.

The expedition in September reached 126 communities, and provided a total of 4,406 doses of COVID-19 vaccine, 1,709 doses of oral polio vaccine and 1,450 doses of measles and rubella vaccine.

PAHO is now organizing the third trip of the year to these and other remote communities in the state of Amazonas for the second half of November 2022.

Despite sleeping in a hammock for 15 days straight, amid mosquitoes and humidity, Rosa Betancourt, coordinator of the boat traveling to Upper Orinoco, believes that it is all worth it to reach people who often feel forgotten: "This time we are going to the Casiquiare Branch. It has been over 10 years since any health commission has been there."

She also believes these journeys should last 20 days and not 15, in order to reach Chalbaud, where the Orinoco begins. "Hopefully next time we can go there." A trip that that must be made before the dry season begins at the end of November, when navigation becomes impossible.

PAHO is working with health authorities, local governments and communities to improve equitable access to COVID-19 vaccines across the Americas. With funds from the Government of Canada, the United States of America and other key partners, PAHO is supporting projects and interventions to take vaccines to indigenous peoples, migrants, hard-to-reach communities and other populations in situations of vulnerability, while increasing the capacities of local health systems and fighting the infodemic.