The Pan American Health Organization/World Health Organization (PAHO/WHO) is working with the countries of the Americas in response to the appearance of the chikungunya virus, which is transmitted by the bites of Aedes aegypti and Aedes albopictus mosquitoes, causing high fever, joint pain, rash, headache, and muscle pain. The first case of indigenous transmission in the Americas was confirmed on 6 December 2013. 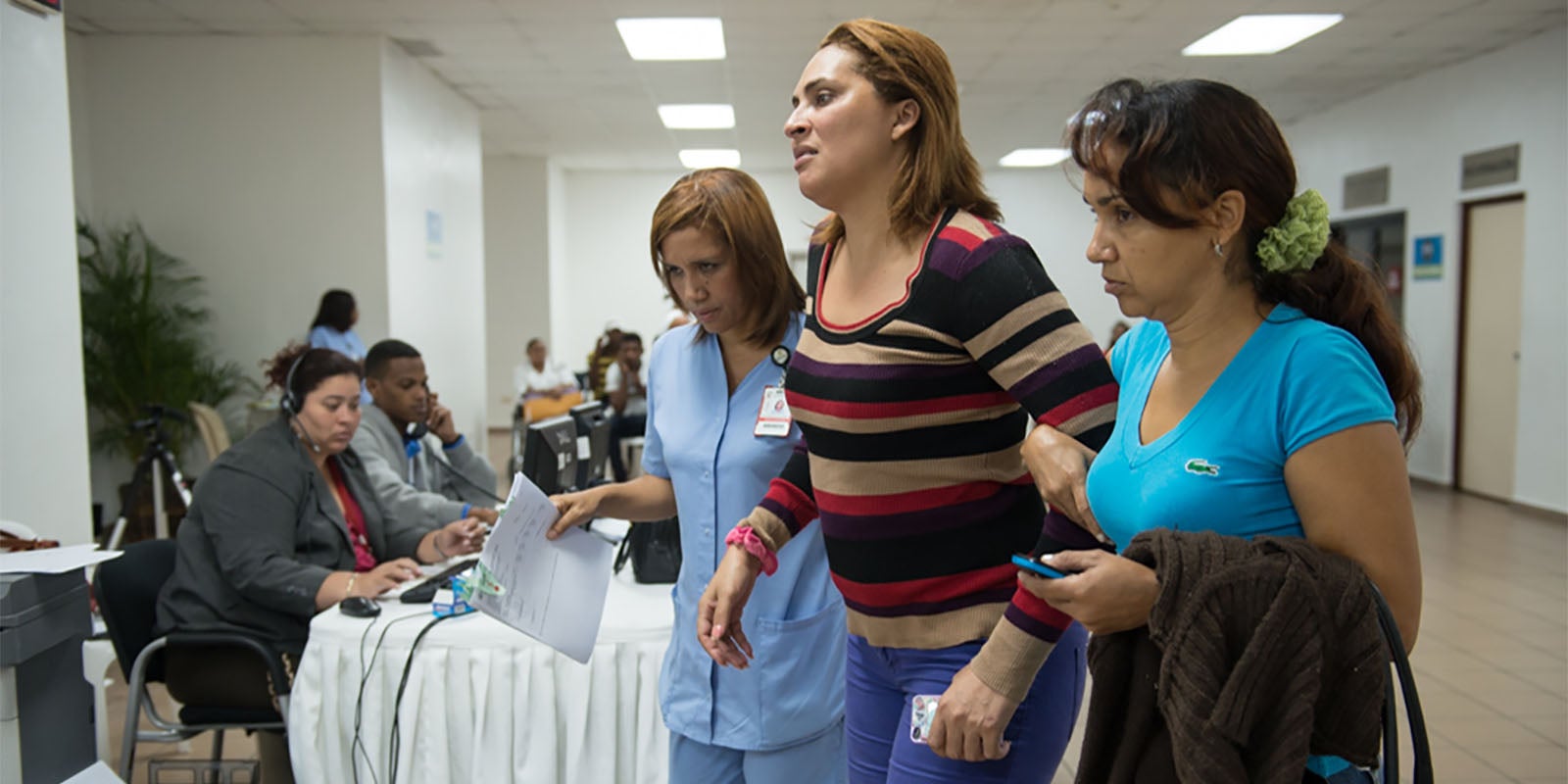 Chikungunya is a virus that causes high fever, headache, and joint and muscle pain about three to seven days after a person is bitten by an infected mosquito. Although most patients tend to feel better within days or weeks, some develop chronic joint pain and inflammation.

The disease rarely causes death, but joint pain can last months or even years for some people. Complications are more frequent in children under 1 and in people over 65 years of age and/or with chronic diseases (diabetes, hypertension, etc.). There is no specific treatment or vaccine to prevent infection by this virus.

What is the origin of the word chikungunya?

The word comes from the African Makonde language and means "bent over in pain." The virus was first detected in Tanzania in 1952. Starting in 2004, intense and extensive outbreaks have been reported in Africa, on islands in the Indian Ocean, and in the Pacific region, including Australia and Southeast Asia (India, Indonesia, Myanmar, Maldives, Sri Lanka, and Thailand). In 2007 there was an outbreak of the virus in the Emilia-Romagna region of Italy, transmitted locally by Ae. albopictus. Prior to the first confirmed cases of indigenous transmission in the Region of the Americas, several imported cases had been reported among travelers returning from Asia or Africa with the virus.

How is chikungunya transmitted?

It is transmitted by the bite of the Aedes aegypti mosquito (which can also transmit dengue and yellow fever, and is present in the tropics and sub-tropics of the Americas), and the Aedes albopictus mosquito (found in more temperate areas, extending from the east coast and southeast of the United States to the provinces of northern Argentina). These mosquitoes are easily recognized by the white stripes around their legs; when they bite a person with chikungunya, the transmission cycle begins.

Is chikungunya transmitted from one person to another?

Chikungunya is not transmitted by hugs or kisses, by food, or through the air we breathe: it is therefore not transmitted from one person to another. The virus needs a vector—a means of transportation: mosquitoes.

The transmission cycle begins when an Aedes mosquito bites someone with chikungunya when they have fever; 10 days later the virus will multiply in the salivary glands of the mosquito and will be ready to transmit the disease when the mosquito bites a healthy person, who will begin to experience symptoms 3-7 days after incubation.

Why is transmission so quick?

There are three factors for rapid transmission that have also been documented in other countries: 1) It is a new virus in the Americas; 2) Since it is a new virus, defenses have not been built against it and the entire populations susceptible to chikungunya; and 3) the Aedes mosquito is widely distributed in the Region due to the climatic, temperature, and moisture conditions of tropical countries.

Can you get chikungunya twice?

No, only once; then protective antibodies are developed. According to the evidence available to date, there should be life-long immunity.

What is the risk of this disease spreading to other countries in the Region?

The risk depends on several factors, mostly importantly the presence of the Aedes mosquito, which transmits the disease. At present, it is not possible to estimate the risk for other countries in the Region, but the possibility that the virus could spread requires us to be alert and to have surveillance measures in place. Since the risk of chikungunya transmission depends on the presence of Aedes mosquitoes, the most important thing is to control this vector: the fewer mosquitoes, the less risk of transmitting the virus. Aedes mosquitoes are currently present in many countries of the Americas.

Indigenous transmission means that populations of mosquitoes in a specific area are infected with the virus and begin to transmit it to people in the same area. Where indigenous transmission occurs, patients do not have a history of travel to endemic areas. Persons who contracted the disease in countries with chikungunya are considered "imported" cases, since they were bitten by infected mosquitoes when travelling to places where the virus is present.

What should I do if I get chikungunya?

In 98% of cases, outpatient treatment is given. Since the pain is intense, patients should rest in bed, preferably under mosquito netting. Taking paracetamol every six hours is recommended for the pain and fever.

To prevent dehydration that can lead to complications, it is recommended to control fever, to rest, and to drink plenty of water. In children and adults, fever can also be lowered by external methods, such as applying cloths soaked in room-temperature water, or showering or bathing, especially for fever above 39 degrees Celsius.

Is there a vaccine that can prevent chikungunya?

No, there is still no vaccine or specific drug against the virus. Symptomatic treatment controls the pain and fever.

Can it cause death?

Cases of death from chikungunya are very rare and almost always related to other existing health problems. Older adults and people with chronic illnesses (such as diabetes, hypertension, chronic kidney failure, tuberculosis, and HIV) should see a physician for better evaluation and monitoring of the disease.

What are the risk groups?

Older adults, young children (especially under 1 year), pregnant women, and people with preexisting diseases are at risk. It is essential to monitor people, especially older adults and children: ensure that they drink plenty of water, control fever, and take them immediately to a hospital if there are warning signs.

The diseases are similar: the main difference is that the fever and joint pain are more intense with chikungunya. Pain from chikungunya affects hands, feet, knees, and back, and can disable people (bend them over), making it difficult to walk or even to open a water bottle. Dengue can cause complications when the fever drops and it is important to look for warning signs.

Can the mosquitoes that transmit dengue also transmit chikungunya? Or do they only transmit one of the two diseases?

According to the available evidence, mosquitoes can transmit both diseases, sometimes simultaneously; however, there is no record of a high coinfection rate.

Can mothers transmit the chikungunya virus to babies during pregnancy or childbirth?

Mothers who have chikungunya during pregnancy do not transmit the virus to their babies. However, there are documented cases of mother-to-child transmission when the mother has fever in the days immediately prior to delivery or during delivery. A caesarean section does not prevent transmission. For this reason, pregnant women with chikungunya are a risk group for transmission to newborns and should be seen by a physician. Chikungunya is not transmitted through breast milk.

What measures should be taken to prevent chikungunya?

The elimination and control of Ae. aegypti mosquito breeding sites reduces the likelihood of the chikungunya and dengue viruses being transmitted.

Like dengue, this virus requires a comprehensive response that involves several areas of action, ranging from health to education and the environment. The mosquito's breeding sites can be eliminated or destroyed through the following actions:

What can I do to protect myself if am I traveling to a place where the chikungunya virus is present?

If you are traveling to a country that has the chikungunya virus, follow these recommendations to prevent mosquito bites and reduce the risk of infection:

Are there any PAHO/WHO recommendations to restrict trips to such areas?

PAHO/WHO does not recommend any travel restrictions in this regard. You are advised to protect yourself against mosquito bites, the same as you would in areas where dengue transmission exists.