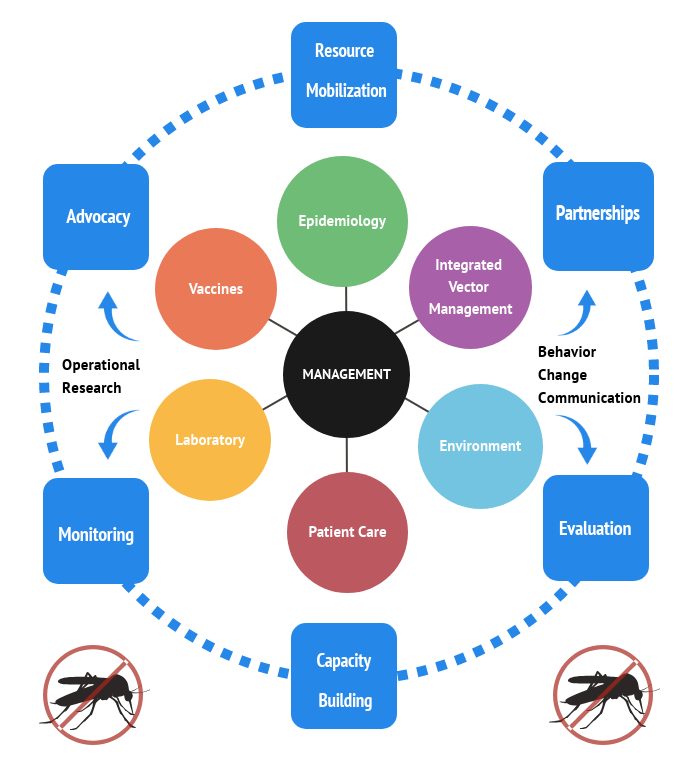 The campaigns to eradicate Ae. aegypti were very successful in the 1950s and 1960s, and by 1972, the vector had been eradicated in 21 countries in the Hemisphere. In recent years, however, dengue incidence in the Region has been on the rise, with increasingly higher epidemic peaks.

This may be due to the accumulation of large populations susceptible to the infection, the circulation of different serotypes of the virus, the heightened virulence and pathogenicity of the circulating strains, and the vector's spread to new areas in the Region and around the world. Dengue cases are currently being reported in more than 30 countries in the Americas.

Up until a few years ago, dengue control models were not integrated or participatory enough and did not approach the problem in its full magnitude and dimensions. Their main drawback was their failure to move beyond the health sector, so they were not intersectoral in scope. Lack of a specific treatment and an effective vaccine against the disease calls for new strategies that break with traditional paternalistic vertical regimens and promote behavioral change and citizen empowerment suited to the particular needs of each country.

In 1999, WHO introduced a global strategy for the prevention and control of dengue and dengue hemorrhagic fever. In 2001, PAHO formulated regional guidelines for dengue prevention and control in Directing Council Resolution CD43.R4. These guidelines, which revisited the PAHO guidelines published in 1994, were aimed at promoting a new generation of programs to strengthen dengue prevention and control mechanisms and national programs through community participation, health education, and coordinated extrasectoral action by governmental and/or nongovernmental organizations. In 2003, the 44th Directing Council of PAHO/WHO adopted Resolution CD44.R9, whose objective was to promote a change in approach by national programs. This resolution issued new recommendations on the types of technical cooperation and methods that the Organization should employ, introduced the Integrated Management Strategy for Dengue Prevention and Control (IMS-dengue) model, and created an international technical task force on dengue in the Region (known by its Spanish acronym, GTI-dengue).

IMS-dengue is a management model aimed at strengthening national programs and thereby reducing the morbidity, mortality, and social and economic burden generated by dengue outbreaks and epidemics. In order to meet its objectives, the strategy seeks to modify individual and community behaviors and diminish the risk factors for transmission through coordinated measures inside and outside the health sector.

It also calls for the preparation and execution of integrated national and subnational plans that will make it possible to put together a sustainable national strategy designed by the authorities and experts of each country, with technical cooperation from GTI-dengue. These national and regional strategies should employ an integrated intersectoral and interprogrammatic approach, based on a new practice that makes it possible to evaluate activities and provide continuity for them with national resources.