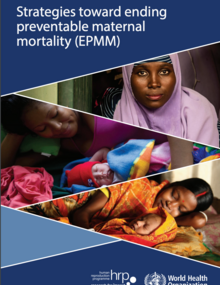 As the 2015 target date for the Millennium Development Goals (MDGs) nears, ending preventable maternal mortality (EPMM) remains an unfinished agenda and one of the world’s most critical challenges despite significant progress over the past decade.

Although maternal deaths worldwide have decreased by 45% since 1990, 800 women still die each day from largely preventable causes before, during, and after the time of giving birth. Ninety-nine per cent of preventable maternal deaths occur in low- and middle-income countries (1). Within countries, the risk of death is disproportionately high among the most vulnerable segments of society.

Maternal health, wellbeing and survival must remain a central goal and an investment priority in the post-2015 framework for sustainable development to ensure that progress continues and accelerates, with a focus on reducing inequities and discrimination. Attention to maternal mortality and morbidity must be accompanied by improvements along the continuum of care for women and children, including commitments to sexual and reproductive health and newborn and child survival.