Session 4: The future of tobacco control: is the endgame a possibility for the Americas?

Session 4: The future of tobacco control: is the endgame a possibility for the Americas?

Over the years, the landscape of tobacco control has changed as new opportunities and challenges have emerged. Despite strong efforts and significant achievements at various levels, the tobacco industry has managed to continue selling products that kill up to half its users when used exactly as intended by the manufacturer.

The Framework Convention on Tobacco Control (FCTC), the first treaty negotiated under the auspices of the World Health Organization (WHO), which became international law in 2005, has established evidence-based provisions to “protect present and future generations from the devastating health, social, environmental and economic consequences of tobacco consumption and exposure to tobacco smoke”. Currently, this Convention protects more than 90% of the world’s population through tobacco control measures to be implemented by its 182 Parties.

In 2013, WHO approved the Global Action Plan for the Prevention and Control of NCD which, for tobacco control, identified measures proven to be cost-effective, like the implementation of smoke-free environments, health warnings on packaging, bans on the advertisement, promotion and sponsorship of tobacco products, and the raising of tobacco taxes. Since 2007, the global population covered by at least one of these cost-effective policies has increased three-fold. However, worldwide efforts on tobacco control need stronger policies to meet one of the targets established in the WHO Global Action Plan for the Prevention and Control of NCD: a 30% relative reduction in prevalence of current tobacco use in persons aged 15+ years by 2025. The Region of the Americas might be the only WHO region to be able to reach this target.

Discussions on accelerating the implementation of tobacco control measures have been fueled by visions of a tobacco-free future. This has been motivated by WHO FCTC article 2.1, which encourages the implementation of measures beyond those required by the Convention and its protocols. As a result, strong evidence has been collected to determine policy options that can guide us towards the end of tobacco, “wherein commercial tobacco products would be phased out or their use and availability significantly restricted”.

One of the definitions that synthetizes diverse endgame approaches, strategies or policy options describes them as “initiatives designed to permanently change/eliminate the structural, political and social dynamics that sustain the tobacco epidemic, in order to end it within a specific time”. There are policy options that focus on products (e.g. regulations of nicotine levels), users (e.g. smoking licenses), market/supply (e.g. bans on displaying, combustibles products, sales by year born), and institutional structure (e.g. integrated endgame strategies). Additionally, tobacco endgame goals have been established to monitor these strategies which include, but are not limited to, reducing tobacco use prevalence to very low levels, eliminating tobacco smoking and phasing out the sale of tobacco products, among others.

Recently, potential threats to tobacco control policies, such as the introduction of novel and emerging nicotine and tobacco products targeted particularly towards youth, have become more prominent. This should encourage further action to protect public health, especially through the implementation of the MPOWER package, that outlines six essential measures proven to reduce tobacco use, as well as other tobacco control provisions of the WHO FCTC and the adoption of policy options that go beyond those measures, like endgame-oriented options.

Accelerating the implementation of tobacco control measures contributes not only to public health goals, but also to sustainable development targets. Another historic milestone in tobacco control was achieved in 2015, when the “United Nations General Assembly recognized the WHO FCTC (target 3.a) as one of the ‘means of implementation’ to reach the overall health goal (Sustainable Development Goal 3)”, including non-communicable diseases’ targets. In the context of the current COVID-19 pandemic, meeting target 3.a is particularly relevant to protecting people from developing major risk factors that result in poor outcomes in patients suffering from the disease, and to stimulate economic recovery.

During this session, participants will have the opportunity to review tobacco control achievements and challenges for future perspectives, discuss key definitions of the tobacco endgame movement, and understand its diverse approaches and goals. This webinar will discuss tobacco control efforts in the context of meeting non-communicable diseases targets and Sustainable Development Goals, in pursuit of protecting public health and overcoming current economic issues. Lastly, participants will learn from different perspectives on what lies ahead regarding the implementation of endgame strategies, both in the world and the Region of the Americas.

Objectives of the Session: 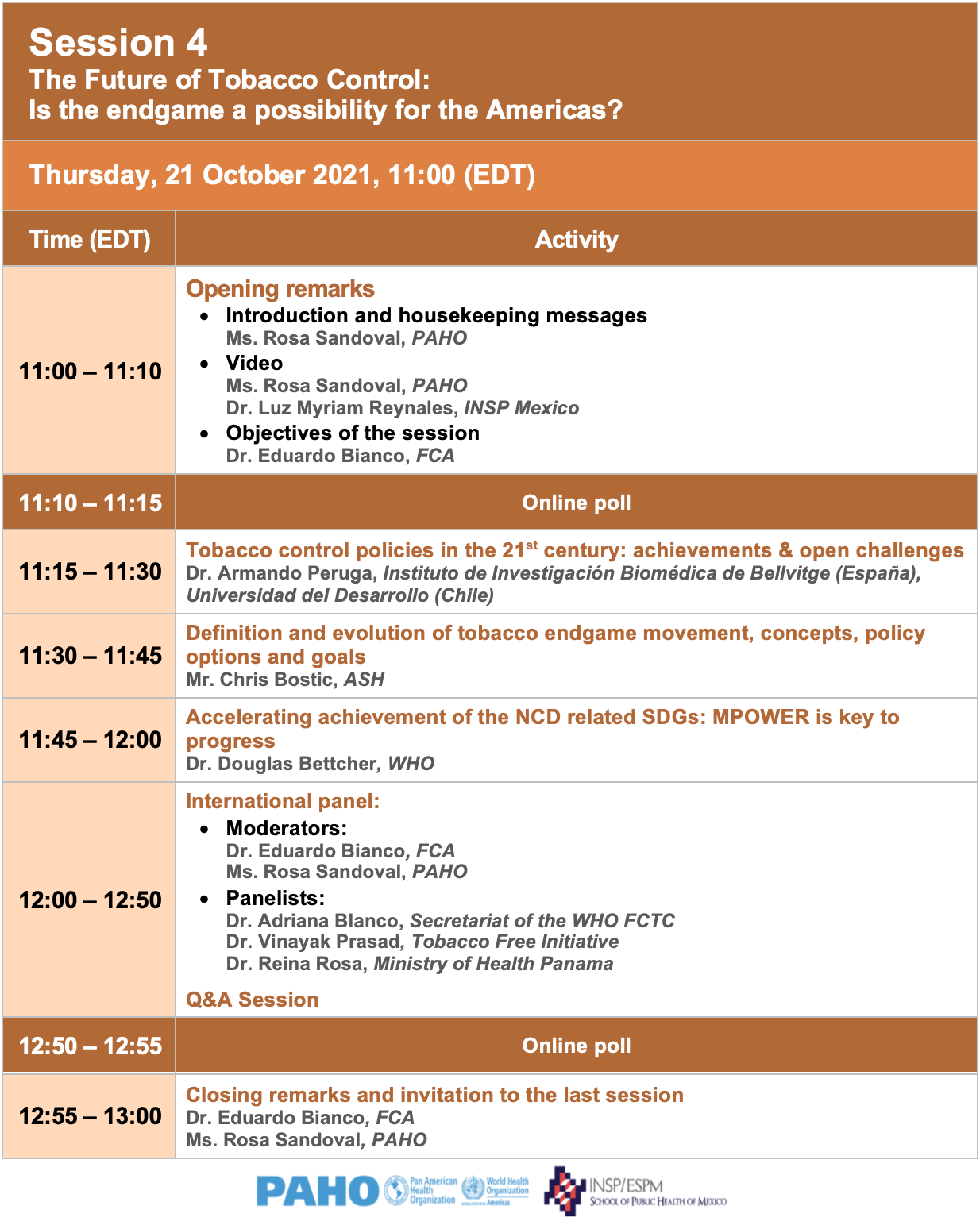 CLICK HERE FOR A BIBLIOGRAPHY OF RESOURCES FOR SESSION 4