About the Assistant Director 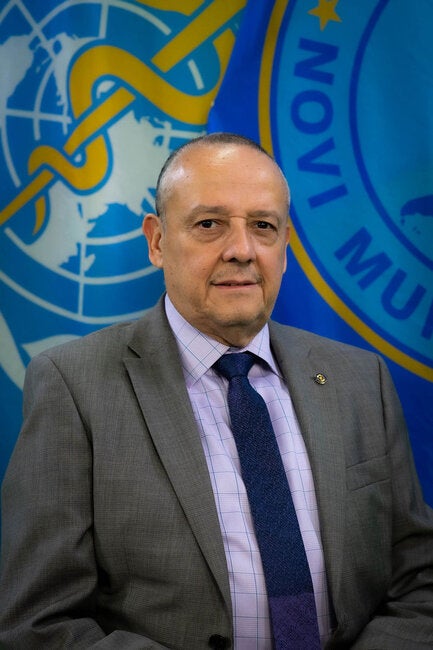 Dr. Marcos Antonio Espinal, a national of the Dominican Republic, received his medical degree from the Universidad Autónoma de Santo Domingo, Dominican Republic. He undertook postgraduate training in pediatrics for three years at the Robert Reid Children Hospital of Santo Domingo. Thereafter, he obtained a master's degree in public health and a doctorate in public health from the University of California at Berkeley School of Public Health.

Dr. Espinal began his professional career in 1992, at the Ministry of Health of the Dominican Republic and the National Center for Research on Maternal and Child Health, serving as Coordinator of research projects on maternal and child health and infectious diseases, and as Epidemiologist for the Robert Reid Children Hospital, coordinating collection and analysis of morbidity and mortality data of the hospital. From 1996 to 1997, he served as Research Scientist for the New York City Public Health Department, where he coordinated a HIV/AIDS pediatric surveillance project in ten hospitals in New York. He joined WHO as Medical Officer in November 1997. There, he was project manager for DOTS-Plus for Multidrug-resistant Tuberculosis (MDR-TB), an initiative launched by WHO and international partners to assess the feasibility and cost-effectiveness of second-line drugs. In 2003, he was appointed as Executive Secretary of the Stop TB Partnership, a global movement aiming at the elimination of TB as a public health challenge, where he served until 2010.

Dr. Espinal joined PAHO Headquarters in August 2010 as Area Manager, Health Surveillance, Diseases Prevention and Control (former HSD). In 2013 his title changed to Director, Communicable Diseases and Health Analysis (CHA), and since January 2018 he served as Department Director, Communicable Diseases and Environmental Determinants of Health (CDE) until his designation as Acting Assistant Director of PASB on 1 June 2022.