International health policy forum for the elimination of HTLV

We would like to wish you a warm welcome to the “Webinar HTLV World Day: International health policy forum for the elimination of HTLV” co-organized by HTLV Channel and PAHO/WHO. The event will be an interactive meeting, and will be held online on 10th November of 2021, at 08:00am (GMT -3).

The webinar will discuss public health policies aimed at people living with HTLV-1/2. The objective is to share experiences and good practices from different countries and to discuss strategies for the prevention and eradication of the virus.

The event will be broadcast simultaneously in three languages: English, Spanish and Portuguese. Join us in this virtual meeting! Let`s build together an agenda to tackle HTLV infection.

Human T-lymphotropic virus (HTLV) infection has been neglected since the onset of the AIDS pandemic and the description of the HIV-1 virus in the early 1980s, despite the high morbidity and mortality. This infection affects vulnerable population groups (FSW, MSM, IDU, people living in poverty in areas of very low HDI, epidemiologically semi-closed population groups including quilombolas and indigenous people).

In this context, researchers published an open letter to the WHO in 2018 in The Lancet, emphasizing that the time had come to eliminate this infection in our midst. In response to this request, the initial step is to shine light onto HTLV and support an international effort towards the elimination of HTLV-1/2.

Thus, PAHO/WHO, in partnership with the HTLV Channel, is organizing the “HTLV World Day Webinar: International health policy forum for the elimination of HTLV”. This event aims to discuss public policy actions implemented in several countries, which contribute to achieving the goal of HTLV elimination.

The actions taken together should be an inspiration for those countries which are still finding problems in establishing prevention and control strategies to avoid HTLV-1/2 and to jump into the proposal of future elimination of the viruses.

The event will be divided into sessions where health policies in the continents will be discussed, the impression of people living with HTLV in different countries, and finally the characteristics of this infection in the Region of the Americas.

Join us in this virtual meeting! Let`s build together an agenda to tackle HTLV infection. 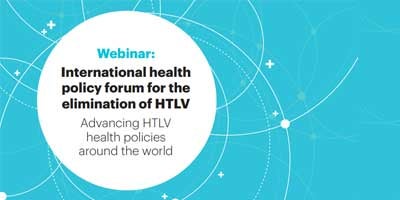 The following speakers have confirmed participation:

The event will be broadcast simultaneously in three languages: English, Spanish and Portuguese.

We invite all for the submission of abstracts regarding HTLV surveillance and health policies to eradicate HTLV.