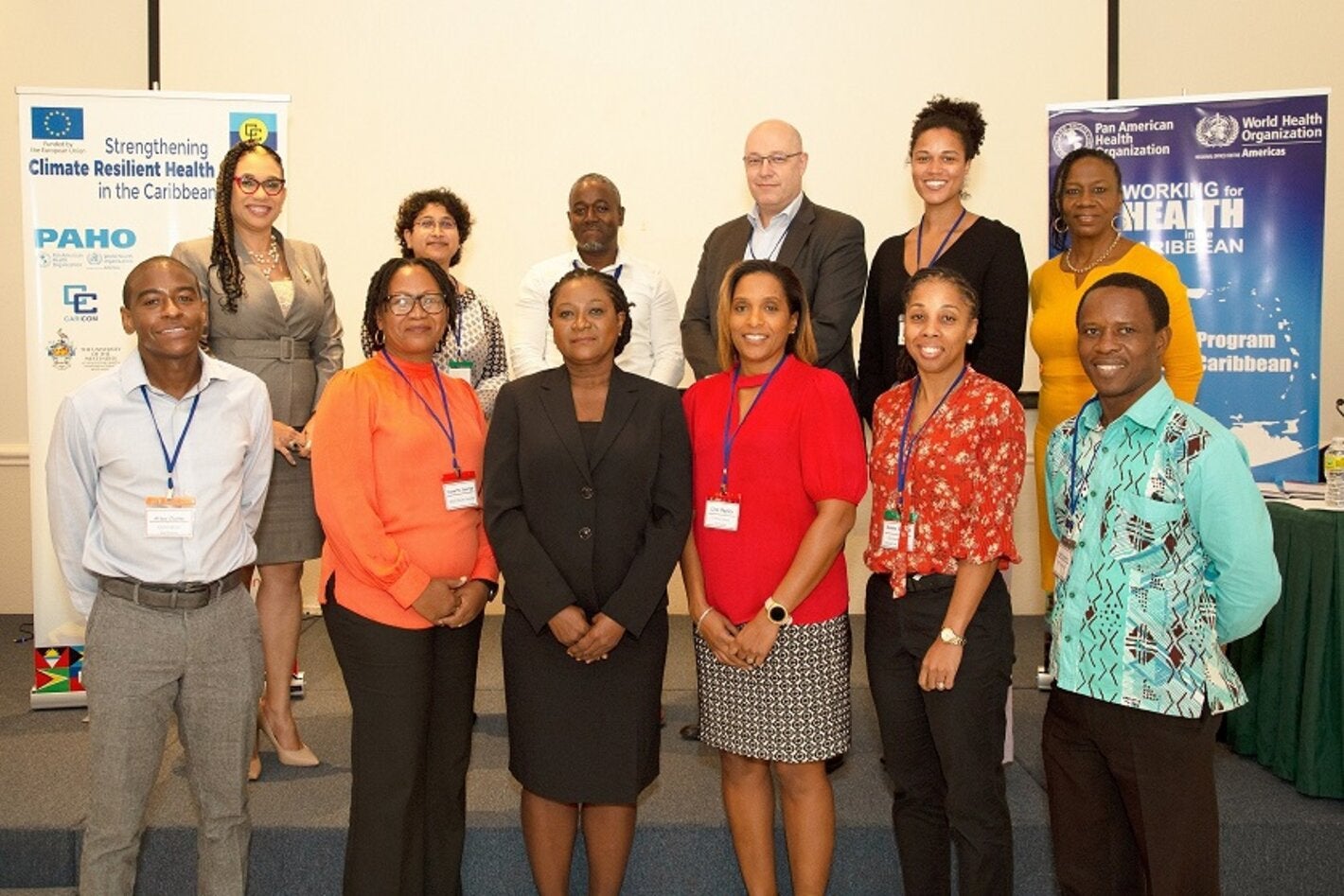 Bridgetown, Barbados, 13 January 2023 (PAHO/WHO) – Despite the challenges of working through the pandemic, the European Union (EU)/CARIFORUM Climate Change and Health project has met most of its targets and exceeded others.

Project partners recently met in Barbados to report to the Steering and Advisory Committees on progress made within the three-year period.  The project which is crafted using actions recommended by the Caribbean Action Plan on Climate Change and Health, is being coordinated by the Caribbean Subregional Programme Coordination (SPC) Office of the Pan America Health Organization/World Health Organization (PAHO/WHO).  SPC Director, Dean Chambliss noted that though the COVID-19 pandemic proved to be a challenge, much was achieved.

“It was also much more difficult to get the attention of country representatives as they struggled to manage varying priorities related to health, such as the procurement of vaccines and therapeutics and space to manage patients.  Even as we simultaneously supported efforts to mitigate the coronavirus, we also began the implementation of Health National Adaptation Plans in 10 countries, developed work plans for AirQ+ projects in 6 countries, and drafted water and food safety plans and protocols, among other achievements,” Mr Chambliss reported.

Alexis Downes-Amsterdam, Director General of the CARIFORUM Directorate, chaired the Steering Committee on behalf of the Secretary-General of CARICOM, who is responsible for all European Development Fund projects and programmes financed by the EU.  Ms Downes-Amsterdam committed to assisting the project team and partners in encouraging participation from all of the CARIFORUM states whether it be in participation in the University of the West Indies-led Fellowship Program or in the use of the WHO tools.

Donna Gittens, Programme Manager, Climate Change at the Delegation of the European Union commended the project team and reiterated the EU’s support to advance the project actions.

“At the end of the project, we would really like to see how the project has been able to move that needle and demonstrate that this has opened up a space in which the health sector has a very strong voice in the climate space and that health considerations are a priority in the climate change discussion and how this programme has pushed us towards improving that nexus, especially in the Caribbean,” Ms Gittens emphasized.

In highlighting the need for sustainability, Luca Trincheri, Team Lead, Green Partnership with the Caribbean, EU Delegation to Barbados and the ECC Countries, stressed the need for engagement at the policy level to ensure that the usefulness of WHO tools is appreciated and put to use.  “These are efforts that need to be country-led but partners like the EU will stress that it is not just a matter of sustainability of an EU project, but it is a matter of making sure that tools that are recognized by the practitioners are useful are used,” he said.

Project Coordinator, Audreyanna Thomas, reported that year two the project focused on the implementation of Health National Adaptation Plans (HNAPs), the development of work plans for AirQ+ projects and the development of water and food safety plans and protocols is in progress.  The first cohort of the UWI Climate Change and Health Leaders Fellowship Training Program was completed, the second cohort was in progress and applications are now open for the third.  The project has also developed and shared communications and visibility products and conducted training and engagement events.  Most recently four videos were produced to highlight the work of two first-cohort fellows from St. Lucia and Barbados.  The implementation of the first cohort of the CARICOM Youth Ambassador (CYAs) program was completed and three projects were initiated in St. Kitts and Nevis, Trinidad and Tobago and Turks and Caicos.

In year three, plans include increased promotion of the importance of the WHO tools in the countries, determining the priorities for additional support in implementing recommendations from the HNAP Reports and support and offering greater assistance in improving surveillance capacity of professionals and Climate Change and Health Leaders.