Kangaroo Mother Care, Revisited: New knowledge about quality of care and the neurological development of premature babies; an Interview with Dr. Nathalie Charpak 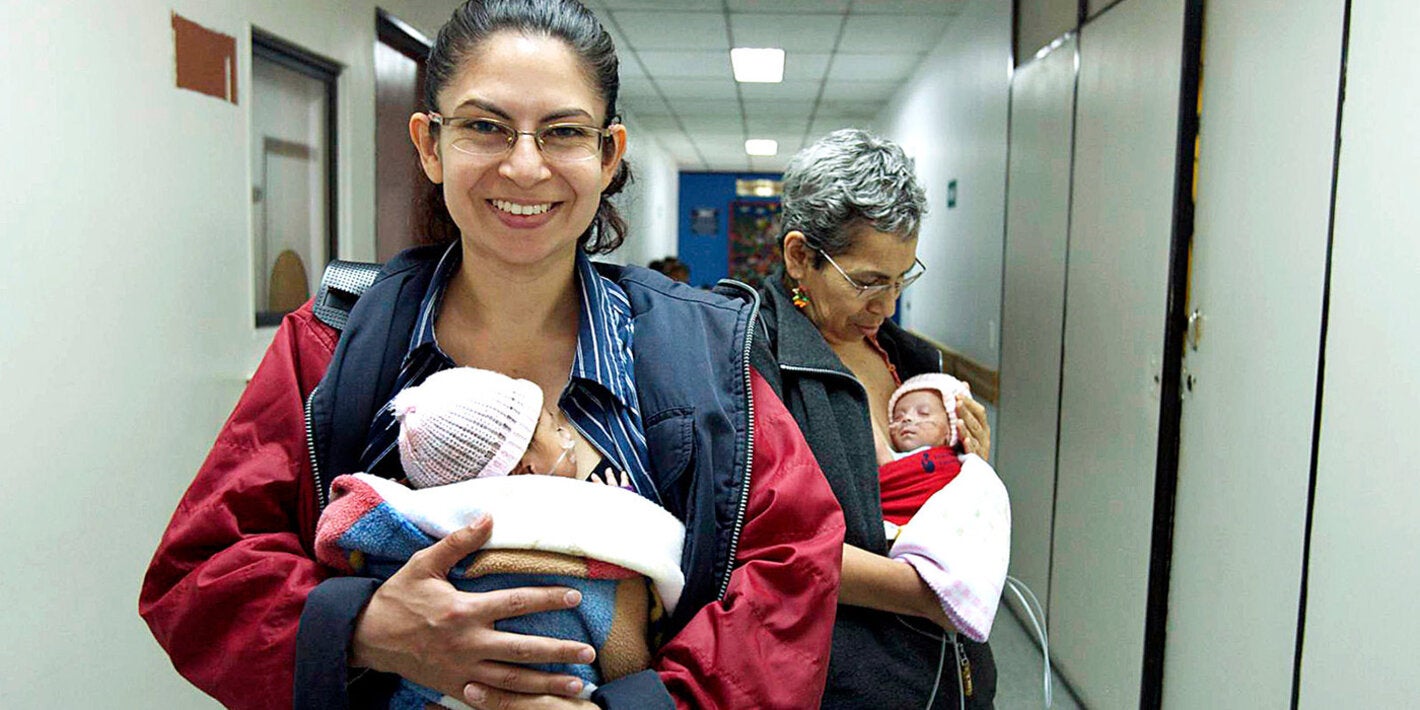 Like other forms of "kangaroo care," KMC is an incubation method to keep newborns weighing 2000 grams or less at birth and those unable to regulate their own body temperatures warm1. Rather than isolating babies in loud, mechanical neonatal intensive care units (NICUs)—which have been shown to cause both psychological stress and adverse physiological changes—KMC positions preterm and low-birth weight babies in direct skin-to-skin contact with a parent or caregiver once stabilized. While KMC was originally conceived in 1978 in response to overcrowding and inadequate resources for NICUs in Colombia, more recent research studies have shown that skin-to-skin contact works as an effective technique not only for thermal control but for breastfeeding, and bonding irrespective of clinical settings, gestational age, or weight2 3. This case study recounts a conversation with Dr. Charpak to highlight how research evidence has drawn attention to important aspects of neonatal development.

During an interview with PAHO, Dr. Charpak outlined three types of surrogate benefits emerging from an intervention like KMC. Firstly, from a sociological standpoint, placing babies in direct contact with their parents presents an immediate opportunity to establish a parent-child relationship without delay and avoids separating the neonate from caregivers simply because of illness. She argued that by involving them directly, parents and caregivers are naturally compelled to assume the roles of providers for their preterm babies. For the infant, investigators have observed a stronger tendency for babies to quickly settle down into a deep sleep (lower state of consciousness) or become less fussy before feeding when in KMC position4. By enhancing the parent-infant bonding, KMC facilitates the psychological bonding process necessary to overcome the initial stress and shock already associated with a premature birth.

Secondly, kangaroo care promotes growth and development. Notably, KMC encourages exclusive breastfeeding and lactation which contribute to proper nutrition needed to sustain appropriate growth and weight-gain rates3. Dr. Charpak also alludes to neural stimuli: "It's favorable for the baby to smell his/her mother, hear the heartbeat, and experience tactile stimulation which resembles the comfort experienced in-utero." Research done at the Université Laval supports these claims5. Comparing the motor cortex of premature adolescents (39 who underwent KMC and 18 who underwent NICU), the investigators discovered that premature infants under KMC had better brain functions in adolescence than their counterparts who underwent incubator care. When comparing brain maturation, the KMC-patients had brain connectivity more similar to patients born at term. This research suggests an association between KMC and optimized neuroplasticity during critical stages of infancy by reproducing intrauterine environments that NICUs cannot simulate.

Thirdly, Kangaroo Mother Care has led to some changes to standard of care that has improved how neonates are treated. The implementation of KMC units is a 24/7 service requiring clinics to operate non-stop. In contrast, in some low and middle income settings babies in NICUs are left alone while attached to monitors, ventilators, and other mechanical contraptions. Further, NICUs are subject to the dangers of outdated equipment or inconsistent electricity grids found in resource-poor hospital settings6. However, KMC, by removing the automation, obliges hospital staff to treat newborns like regular patients (e.g. respecting sleep patterns, reducing exposure to stressors such as noise). This has been associated with dramatic reductions in negative physiological responses such as sleep apnea and fluctuations in heart rate, blood pressure, and oxygen saturation7. At the same time, they also they lessen the hospital workload by introducing parents as additional caregivers.

In practice, maternity wards, for example in Nicaragua, have shown KMC to be a cost-saving implementation because it decreases the average lengths of stay in hospitals and thus lowers resource consumption 8. Additionally, for hospital units surrounded by varying road conditions and surface disruptions, KMC position provides a safer form of transportation. While little data about this adaptation exists in the Americas, studies from Belgium show that the mother and her body provides adequate safety and comfort 9. This data suggest that KMC as an intervention decreases parental stress and increases quality of care for the infant while gaining high satisfaction among hospital staff.

Although KMC originated in response to limitations of resource-poor hospitals, the benefits attributable to this health service has undoubtedly extended beyond its original purposes and generated new knowledge to improve the standards of care for newborns. From discussion with Dr. Charpak, we arrive at the conclusion that KMC is neither a return to ancestral practice nor an alternative to more conventional means of neonatal care; instead, it complements the NICU. By adopting a more holistic form of medicine and introducing an intervention that looks natural despite of not actually being "natural in nature," research presents one cost-effective, functional care system that improves the way preterm and low birth weight babies are cared for in hospitals.

At the same time, Dr. Charpak cautions that in addition to implementation, "numbers must be published and guidelines must be actualized." More published observations will be needed to more comprehensively understand the returns of health services like KMC in varying settings. The strength behind this intervention, nevertheless, is that it has been and continues to be extensively researched, thus further pushing the boundaries of knowledge for better health.

Jimmy Toan Le was the lead author and organized the case study through interviews with Dr. Nathalie Charpak, who reviewed and approved the final version. Dr. Luis Gabriel Cuervo, who as a mentor provided guidance and inspiration, reviewed and edited the final drafts. The photos illustrating the case study are from the exhibit "Research on the Move" by photographer Jane Isabelle Dempster, and are part of PAHO's Art for Research Project.