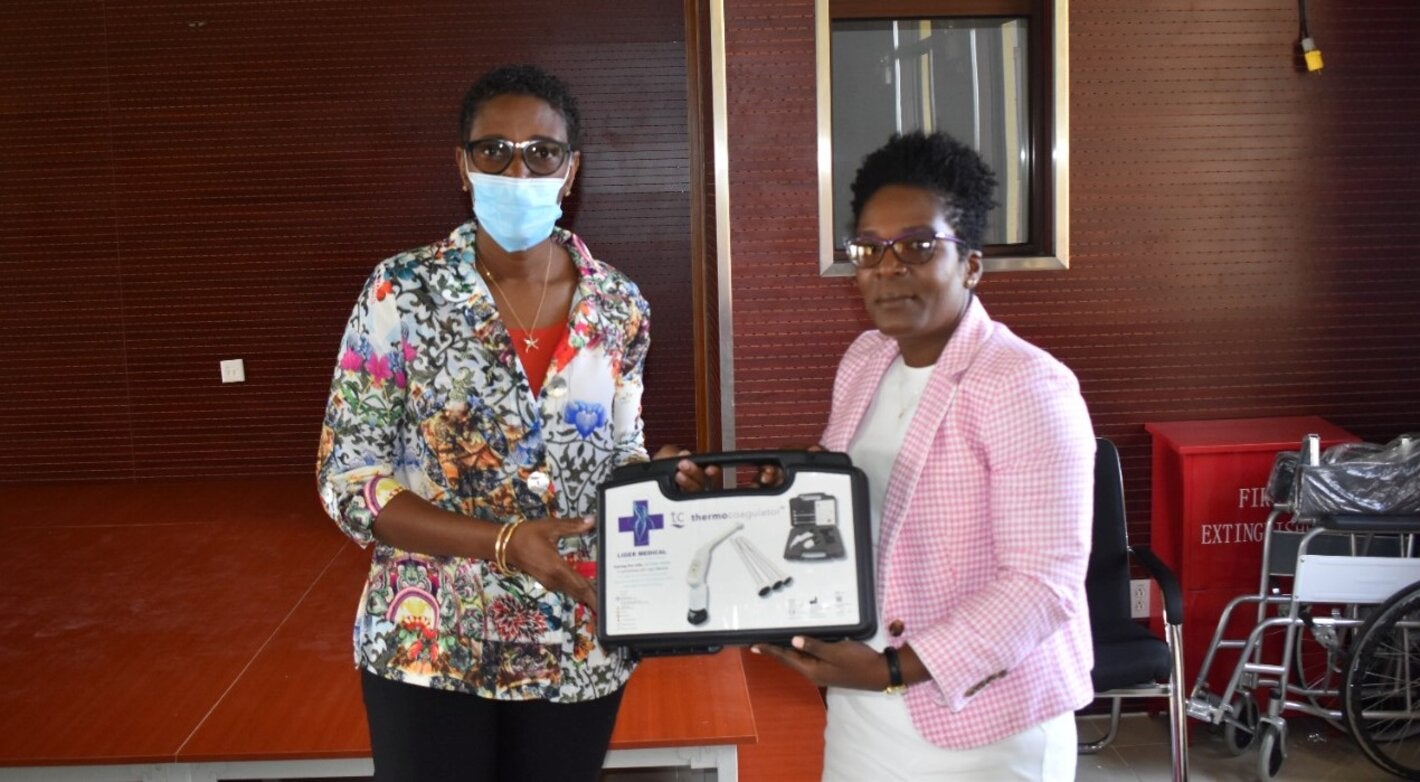 On July 27 to 29, 2022, officials from the Ministry of Health, Wellness and the Environment and other key stakeholders from other Governmental Ministries, Departments and Non-Governmental Organizations (NGOs) met with a visiting team from the Pan American Health Organization/World Health Organization (PAHO/WHO) and Basic Health International (BHI) to conduct  a needs assessment to determine the country’s readiness to implement a 1,500-person pilot project for high quality cervical cancer screening.

Five of the country’s community clinics will be utilizing human papillomavirus (HPV) testing to screen for cervical cancer in patients attending these clinics.  The team handed over 3 units of the HTU-110 Thermocoagulator donated by the Clinton Health Access Initiative (CHAI). PAHO/WHO also donated HPV test kits and a GeneXpert IV machine towards the project.

Cervical cancer remains the 4th leading cause of death in women from cancer internationally despite well established, effective approaches to prevention, early detection, and treatment.  Published data from 2001-2005 reveals one the highest standardized incidence rates in the region: 23 per 100,000 women, with an increasingly younger demographic. National data from 2014-2018 reveals that cervical cancer was the third leading cause of death in women. With early diagnosis and effective treatment cervical cancer is one of the most successfully treatable forms of cancer.

This collaboration commenced approximately six years ago in April 2016, when a visiting team from BHI, a global leader in the secondary prevention of cervical cancer, and PAHO/WHO visited Antigua and Barbuda, upon the invitation of the Government of Antigua and Barbuda.  The team   met with several stakeholders to better understand the background and scope of cervical cancer prevention efforts in the country. Based on the recommendations from this visit, the national Cervical Cancer Task Force was established in 2018 within the Ministry of Health, Wellness and Environment to lead national efforts to decrease the burden of disease from cervical cancer.

In June 2021, the Department of Obstetrics and Gynaecology at the Sir Lester Bird Mount St John’s Medical Centre in Antigua and Barbuda hosted its first virtual Cervical Cancer Symposium under the theme “Cervical Cancer in the Caribbean: Focusing on the WHO global strategy for elimination”. The theme sought to highlight the recent WHO global initiative to eliminate cervical cancer through its 90-70-90 targets for 2030 through vaccination, screening and early detection and treatment of precancerous disease. Providing technical support and in attendance were PAHO/WHO and Caribbean Public Health Agency (CARPHA).

Immediately after the webinar, the national Task Force collaborated with PAHO/WHO and BHI to implement a pilot project for cervical cancer screening using HPV testing. HPV testing has been shown to be more sensitive and effective than other screening tests and is recommended as countries implement the elimination strategy.

To support the implementation of the pilot project, Antigua and Barbuda convened an HPV Testing and Treatment Training Programme and became the first country to implement the WHO’s HPV manual.  The manual “Introducing and scaling up testing for human papillomavirus as part of a comprehensive programme for prevention and control of cervical cancer” was launched virtually by the PAHO/WHO in December 2021 in Antigua and Barbuda. The project will also involve the development of a cervical cancer registry and dissemination of health promotional strategies supported by BHI.

The Chief Medical Officer Dr. Rhonda Sealy-Thomas expressed her gratitude to the team for this visit and noted the commitment of the Ministry of Health to seeing the project through and to it becoming a program. “I'm committed this round for it to become a program. We have a dedicated team on the ground to assist in getting that forward.  I’m confident that it will move forward, and we have the political will.  It's not just for cervical cancer, we're building capacity. So hopefully when we get this project and program out of the way or up and running, we use this as a best practice so we will have the platform to actually move the other cancer prevention programs forward as well,” she said.

Eliminating cervical cancer as a public health problem is in keeping with the commitment made by member states in achieving Universal Access to Health Coverage and that of the Sustainable Development Goals (SDGs).