Dr. Tabaré Vázquez, former President of Uruguay, was known for his work pioneering tobacco control measures, was named a Public Health Hero of the Americas by the Pan American Health Organization/World Health Organization (PAHO/WHO) on 21 September 2018 in Washington, D.C.

A medical doctor specialized in oncology and radiotherapy, President Vázquez, was recognized r for his outstanding leadership in the protection and promotion of public health in Uruguay, the Americas, and the world. As a result of actions led by President Vázquez tobacco use in adults over the age of 15 in Uruguay has continued to decrease. According to estimates from WHO, the country is on track to achieving a 30% reduction in tobacco use by 2025. 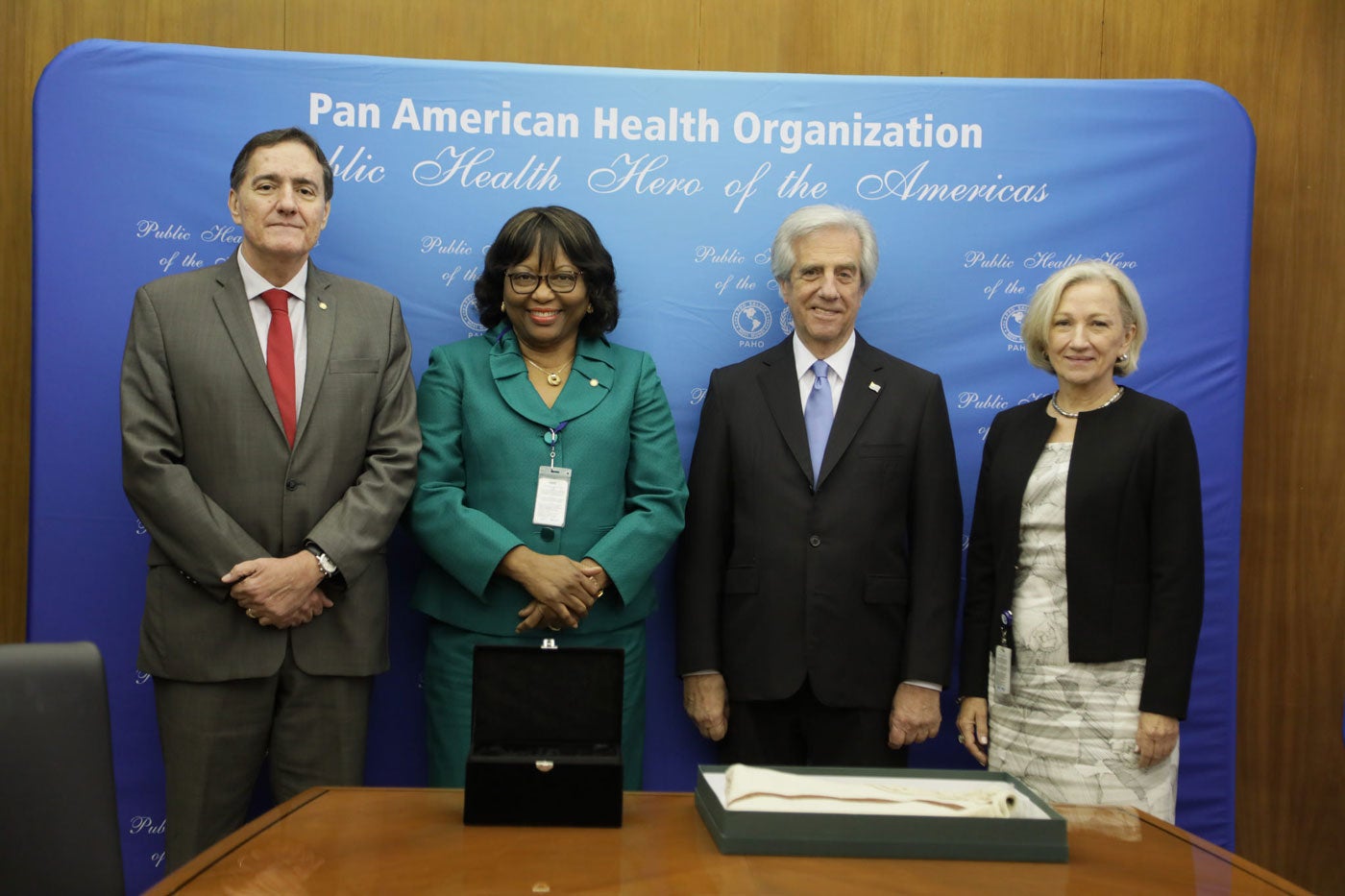 President Vázquez will be remembered, however, for his vision for a smoke-free country, and his stance towards the multinational tobacco company that tried to undermine Uruguay’s tobacco control legislation.

“We are honored to bestow this special award on Dr. Vázquez who, in addition to his vocation as a doctor, has promoted health from a platform that is distinct from that of others who have shared this award, in this case, from the realm of politics,” said Dr. Carissa F. Etienne, Director of PAHO, during the award ceremony, held at PAHO’s Headquarters in Washington D.C. “President Vázquez’s achievements reflect a deep personal commitment to improving the lives, health and wellbeing of not only Uruguayans but also those in other countries and other regions,” she added.

“In order to face, and reverse, the growing morbidity and mortality rates from cancer and other noncommunicable diseases, it is essential that political decisions and systemic strategies are implemented to reduce poverty, generate social inclusion, promote education, promote healthy lifestyles, and strengthen integrated health systems,” said President Vázquez upon receiving the recognition.

Throughout his presidencies, President Vázquez implemented a host of policies to prevent and control noncommunicable diseases (NCDs). In 2006, under his leadership, Uruguay became the first country in the region to prohibit smoking in enclosed public places and workplaces. Following his “One Million Thank You’s” campaign, which aimed to prepare the general public for the ban, a public opinion survey conducted nine months after the entry into force of the decree revealed an unprecedented level of support, with 80% of Uruguayans in favor of the decree, including two out of three smokers.

In 2010, following the implementation of measures to control the labelling and packaging of tobacco products in Uruguay, the Philip Morris tobacco company filed a complaint with the World Bank’s International Centre for Settlement of Investment Disputes, alleging that the measures were in violation of a bilateral investment treaty. In July 2016, however, an arbitration tribunal upheld Uruguay’s right and obligation to protect the health of its population with measures in line with the WHO Framework Agreement for Tobacco Control (FCTC). Not only was this ruling a milestone in tobacco control measures worldwide, but it was also a vital part of ensuring that other countries would be better placed to move forward with similar tobacco control measures.

Beyond his groundbreaking work in tobacco control, the decision to name President Vázquez a Health Hero of the Americas, was also due to his leadership in the broader fight against NCDs in general. In October 2017, at the WHO’s Global Conference on Noncommunicable Diseases, “Enhancing policy coherence on attaining SDG target 3.4 on NCDs”, the WHO Director General nominated President Vazquez as co-chair of the High-level Commission on Noncommunicable Diseases, in order to provide recommendations on the way forward in the prevention and control of NCDs.

President Vázquez drove forward measures to ensure plain packaging on tobacco products, and to implement front of package food warning labelling so that those products high in sugar, salt and fats can be easily identified.

During his professional career, he received numerous honors, including awards from the World Heart Foundation, the Bloomberg School of Public Health at Johns Hopkins University, the Campaign for Tobacco-Free Kids, among others. In May 2018, he was also honored with the WHO Director-General’s Special Recognition Award for No Tobacco Day.