Seminar: Health Taxes Policies in Latin America and the Caribbean: Are we making progress? - 12 May 2022

In Latin America and the Caribbean, progress in the use of excise taxes on tobacco, alcohol, and sugar-sweetened beverages (SSB) as a measure to improve health has varied. The greatest progress has been made in tobacco taxes, where both globally, and in the region, there is abundant evidence of their effectiveness in reducing consumption of these products and preventing uptake in young people. This has motivated the positioning of taxes as a method to achieve health objectives. Thus, in recent years, several countries in the region have increased tobacco tax rates or improved tobacco tax structures for health purposes. However, despite the compelling evidence in its favor, it should be noted that taxation (R) is the measure with the least progress in the tobacco control MPOWER package. While 24% of the world’s population is being protected by smoke- free environments, only 13% of the world’s population is protected by taxes on tobacco implemented at best practice levels, and unfortunately this percentage has remained constant since 2018. This is without considering the new challenge of including novel and emerging tobacco and nicotine products.

Regarding taxes on sugar-sweetened beverages, as of March 31, 2019, 21 countries in Latin America and the Caribbean apply this measure. However, in several countries these tax policies are not aligned with health goals. This is evidenced by the fact that there are countries that have implemented SSB taxes on bottled water and, on the contrary, have stopped taxing products with a high level of sugar, such as flavored milk. It is essential that these types of policies use the PAHO nutritional profile as a reference, to determine the products that should or should not be included in the list of products to be taxed.

The panorama of taxes on alcoholic beverages is diverse, due to the different characteristics of these products and the preferences of consumption in the countries. According to WHO data from 2018, in the Latin American and Caribbean region, 28 countries apply taxes to beers and spirits, however, only 26 do so with wine. As in the case of sugary drinks, there is a small number of countries that have developed tax policies for alcohol from a health perspective.

In the case of tobacco, the main argument used by the tobacco industry to prevent tobacco taxes from rising has been a presumed relationship between tax increases and the level of illicit trade. For its part, the Protocol for the Elimination of Illicit Trade in Tobacco Products (Protocol), recognizes that illicit trade weakens the price and tax measures designed to control tobacco, and therefore increases the affordability of these products. Therefore, central measures such as the implementation of tracking systems are essential, as they not only reduce illicit trade, but also prevent evasion, generating a market with a higher price (i.e., decrease in affordability), with a concomitant decrease in the consumption of cigarettes, and growth in tax collection.

As the PAHO economics of NCDs team, we seek to provide Health Authorities with the best theoretical and empirical evidence to support the construction of dialogue between the health sector and other government sectors (particularly fiscal and financial authorities), considering economic reasoning as an edge of analysis for the creation of the most optimal policies to prevent NCDs. In which, the excise tax tool on tobacco, alcohol and sugary drinks is an essential component of a comprehensive approach to change consumption patterns of risk factors for NCDs, with the added benefit of granting additional tax revenue.

In search of providing the necessary and updated information that responds to current topics of debate in the countries of the region, as well as opening a space for discussion on health taxes, strategies to counteract industry interference, as well as tax policies on products of novel and emerging tobacco and nicotine products, and tracking and tracing systems, we hope that this event will have an impact on the decision-making of PAHO Member States. 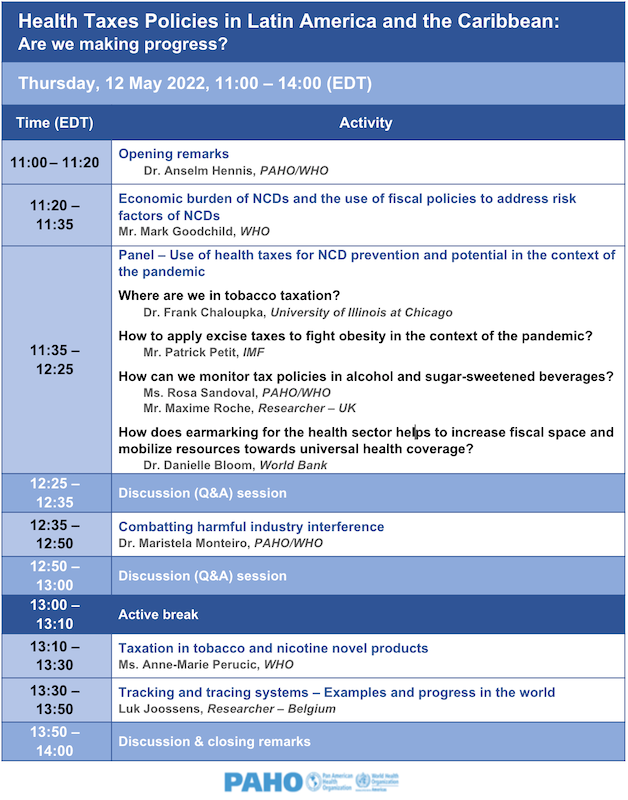 Presentations from the Webinar