At 50 years old, weaver and muralist Olinda Silvano has survived COVID-19. The artist contracted the virus along with more than 70% of the Shipibo-Konibo community of Cantagallo, who had settled near the historic center of Lima 21 years ago.

Lima, Peru, 27 July, 2021 —Throughout her life, Olinda Silvano has seen Cantagallo and its people rebuild time and time again. From State exclusion, to the terrorism of Shining Path, to forced migration to Lima, to the fire that devastated their homes four years ago and, now, the invisible fury of COVID 19, her stoic Shipibo-Konibo community has grown accustomed to being resilient.

Olinda is one of the symbols of that resilience. Heir to the style of art known as kené, characterized by geometric lines seen in ayahuasca visions, she has managed to preserve the ancestral knowledge of her indigenous community. However, that struggle, depicted in fabrics and murals, was disrupted for several months by another threat: the pandemic.

Cantagallo, bastion of resilience to COVID-19

One day in June, she fell ill with a fever. Typical remedies such as inhaling vapors of eucalyptus and matico, a medicinal plant from the Amazon, no longer had any effect. “I felt like I was dying,” she recalls. And she wasn’t the only one. The virus spread throughout the Shipibo-Konibo community living along the left bank of the Rímac river. Case numbers multiplied in just a few days.

In March, barely two months after a state of emergency was declared, Cantagallo became the worst COVID-19 hotspot in Peru: 72.5% of its inhabitants tested positive after 656 tests were administered by the Ministry of Health. Three deaths and seven infections out of every ten people had all the alarm bells ringing. 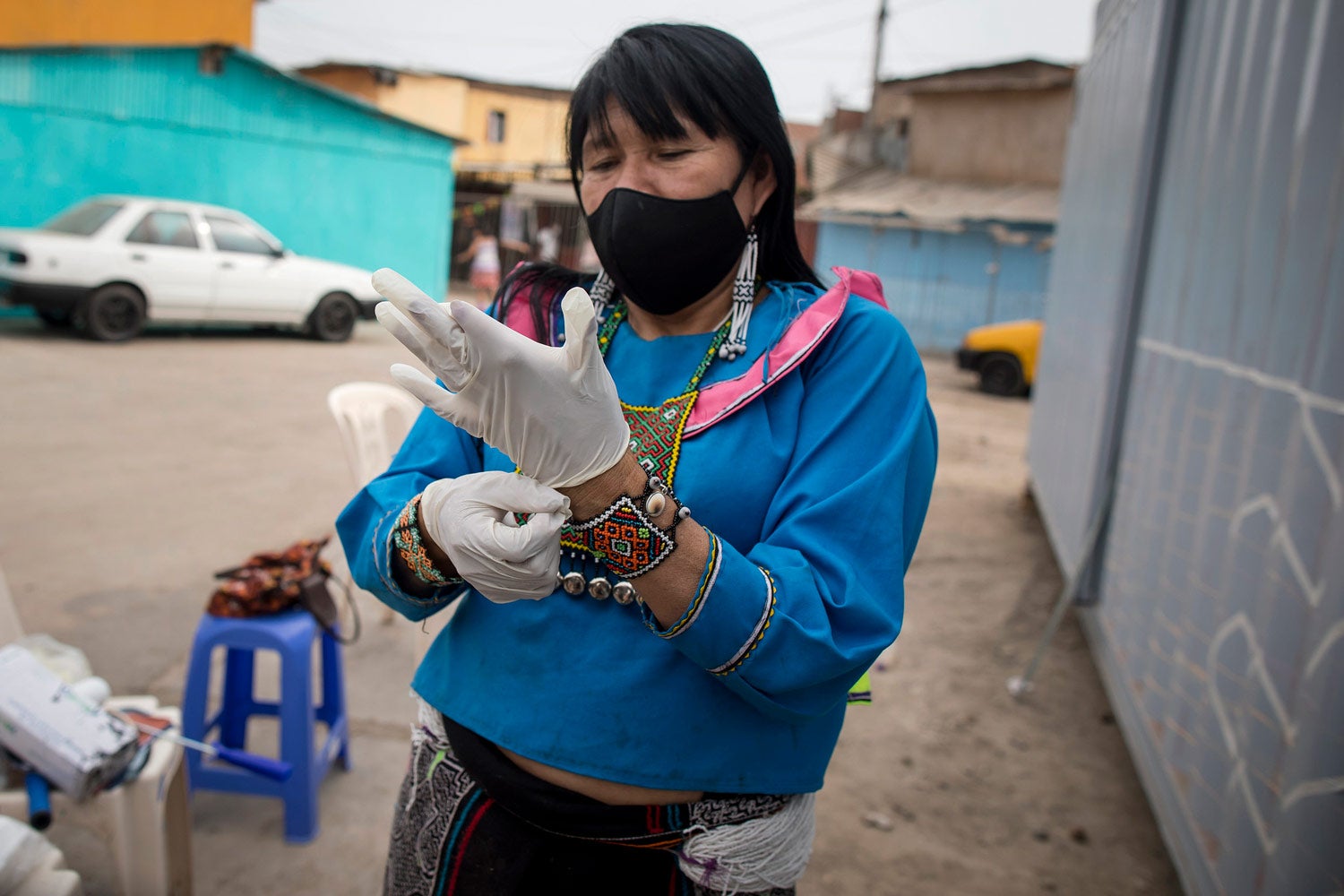 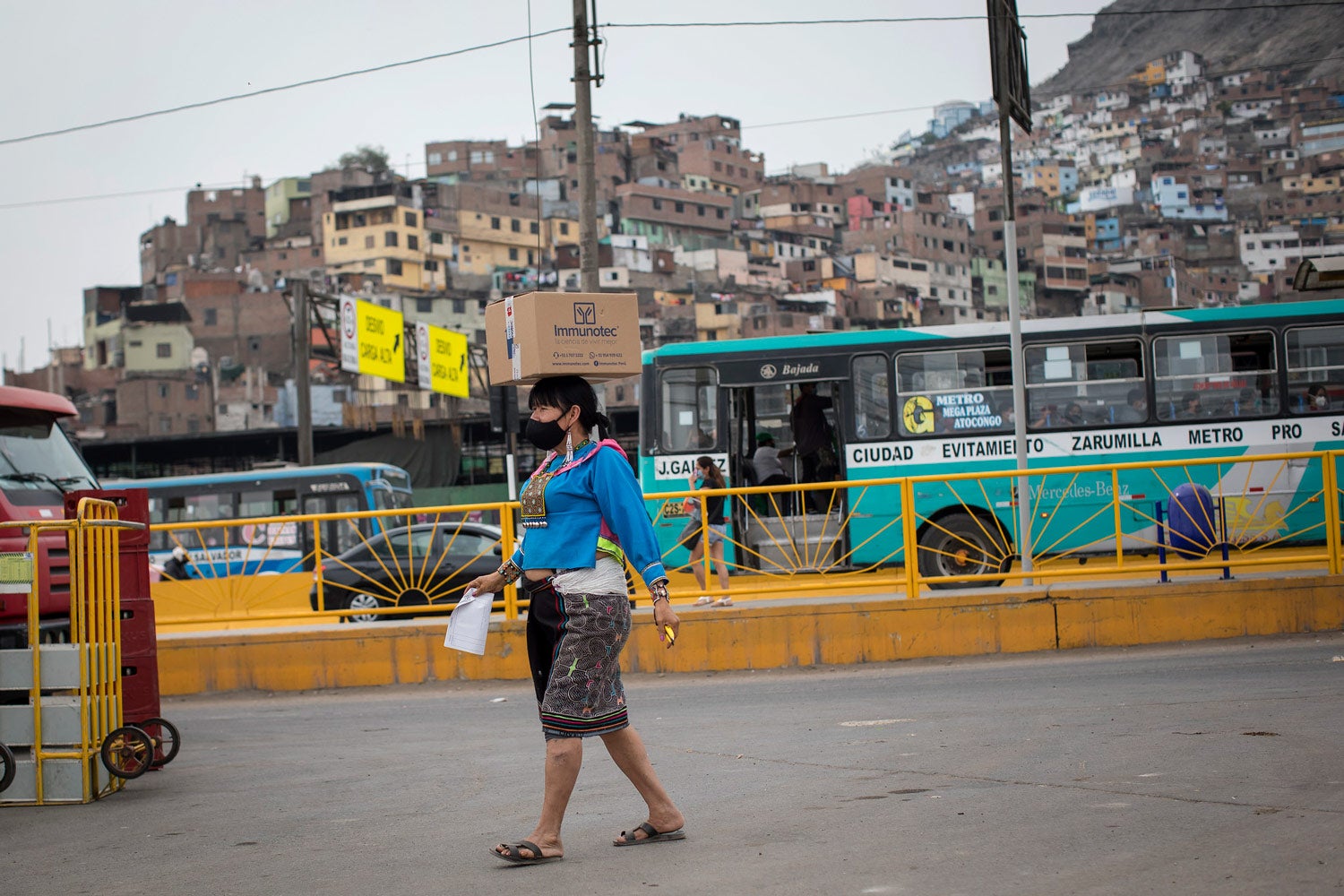 “I thought it would last maybe a month or two,” sighs Olinda, thinking back to the days when the disease was spreading like a curse. The army decided to secure the area. Some 200 soldiers and more than 50 police officers were in charge of maintaining a perimeter around the community to prevent its more than 1,500 residents from coming into contact with the rest of the city.

“Nobody enters, nobody leaves,” was the order. “We had to stay isolated for three months. We were virtually imprisoned,” recalls Carlos Pimentel, leader of the Shipibos Residents’ Association in Lima (Ashirel). The news didn’t take long to travel around the world. “An indigenous ‘ghetto’ in the heart of Lima” declared a headline in the Argentine daily Clarín.

Olinda cannot forget the despair of those days. Not only were there medicine and food shortages, but a lack of basic services such as water, sewage, and electricity services. “Several people tried to escape to find help,” she says. As luck would have it, as is so often  the case in Cantagallo, solidarity made it possible for the necessary supplies to begin arriving. “The whole community and our leaders pulled together. The nurses were with us 24 hours a day. Young people got together and took food and supplies door to door in a wheelbarrow,” says Olinda. She, on the other hand, spent several weeks in bed recovering, with scant relief provided by her medicinal plants and round-the-clock care from her five children.

More isolated than ever, community spirit became Cantagallo’s best survival strategy. “We’ve all been in this together, and that’s how we made it through,” she observes while at the foot of a mural she has begun painting with other artisan mothers while standing on a container. The refurbished space is now the community’s new cultural center. “Art healed me,” insists Olinda. Art helped her get back on her feet, but so did the unity among the people of Cantagallo. “Whenever we hear that a family is suffering, we help out as part of our work for the community,” explains Carlos Pimentel. Olinda’s family, along with the other 243 identified by the Ministry of Health, received health and emotional support.

With houses barely separated by narrow dirt pathways, the residents of Cantagallo have maintained the essence of a native village: they cook outdoors, leave their doors open, and their mindset is always collective. “Here, we all take care of each other,” notes Olinda. This is something Carlos Pimentel is well aware of: he recovered from pneumonia thanks to the support of his people.

“We have overcome all of this, thank God, but it’s not over yet,” says Ashirel’s leader, speaking thoughtfully as someone who knows the needs of his people. He is convinced that the lack of safe drinking water —a problem for 21 years now— made the wave of infections even worse. And while he values the curative properties of the matico plant, he also believes that access to medicine is essential.

Another major concern right now is getting people back to work. Olinda has gotten the artisan mothers to organize once again. She is certain that the new cultural center will bring visitors back to Cantagallo. “We not only need water, electricity, and sewage services but visitors,” she says. Olinda, who has taken her art to Canada, Mexico, and Spain, knows how to be patient.

Cantagallo is resilient. It always has been. That’s the motto that has been immortalized in posters and murals. Since the year 2000, when the community settled on a landfill on the banks of the Rímac river, just behind the Presidential Palace, it became an enclave of cultural resilience, a symbol of the migration that often goes unnoticed.

“We’re a small piece of the jungle right here in Lima,” says Pimentel, originally from Lamas, a province in the high jungles of San Martín. Unlike the Shipibos-Konibo, an Amazonian ethnic group from places like San Francisco, Belén, and Bethel in the upper Ucayali, he is part of a minority that arrived in Cantagallo with different blood but the same hope: to build a better future in the capital.

The pandemic has just made their demands for access to adequate housing and basic health services more visible. “We may be indigenous, we may be Shipibos, but we are from this country,” says Olinda, whose indigenous name is Reshijabe. In the Shipibo-Konibo language, her name means "first breath." As a COVID-19 survivor, she says she has a long way to go until her last.