In line with PAHO/WHO recommendations, the country is using territorial outreach and data analysis to detect and follow up on close contacts of confirmed cases. The goal is to slow the progress of the novel coronavirus.

Buenos Aires, 2 November 2020 (PAHO/WHO) - When Sofia Etchegoyen was a medical student, she did not imagine that just a year after graduating she would be on the front lines of a fight against a pandemic. "This is my first work experience and it is a challenge, but we are making health more accessible to people, which is the most important thing right now," she said, referring to the Strategic Tool for Coronavirus Testing in Argentina, known as Detectar (Detect). The tool has been fully deployed to contain an outbreak of COVID-19 infection in Rafael Calzada, a city in the southern part of the greater Buenos Aires area.
With an emphasis on vulnerable communities and areas where outbreaks have been reported, Detectar involves door-to-door searches for people with symptoms and close contacts of confirmed COVID-19 cases. A team of between 15 and 45 people go out every working day to areas selected on the basis of urgency.

On the visit to each home, volunteers participating in the operation provide information on how to prevent COVID-19, take residents' body temperature, and look for other symptoms of the disease. If they find a potential positive case, the team refers it to a triage center—a gazebo area set up in the middle of the street. There, a team of social workers, nurses, health promoters, and doctors like Sofia interview them and prepare their personal records. The next step is to immediately give them a swab test in a mobile health facility a few meters away. Until the results come back, people suspected of having COVID-19 are put in preventive quarantine.

"We take information on them and their close contacts, and we include everything they tell us in the report. If there are risk factors, such as diabetes, COPD, or asthma, we evaluate whether they need to be hospitalized or referred to an isolation center for close monitoring," Sofia explained. “On a normal day, more than 90 residents visit the gazebo. But it is also a place where we can listen to them. Very often what they need is to be heard, and that's what we're trying to offer them," Sofia said.

The program is promoted by the national Ministry of Health, in line with recommendations from the Pan American Health Organization (PAHO). It was launched simultaneously on May 4 in Quilmes, in the greater Buenos Aires area, and in urban areas of Buenos Aires. Since then, more teams have been deployed in and around the Buenos Aires metropolitan area and in the provinces of Chaco, Entre Ríos, La Rioja, Santa Cruz, and Santa Fe. Since then, the program has been expanded and is now available in all jurisdictions that wish to implement it to complement their local strategies.

Where a large number of cases begin to appear, the goal is to quickly bring them under control," explained Carla Vizzotti, Argentina's Secretary of Health Access. 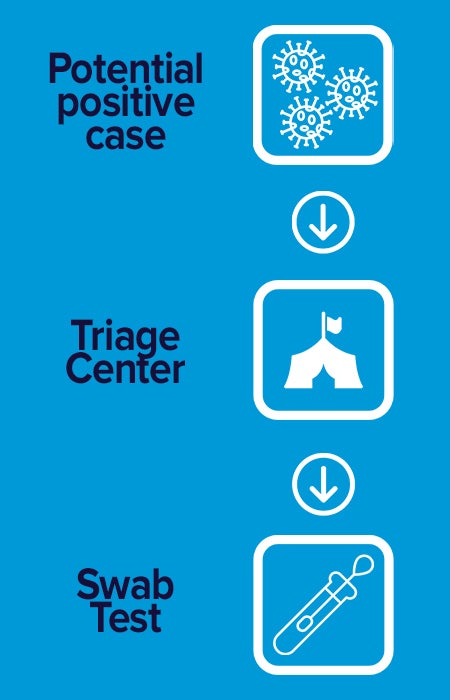 "Moving from theory to practice is difficult. There are complex social situations, for example in poor neighborhoods where people live in overcrowded conditions and it is harder to isolate cases and provide care. But we were able to implement the program in places where community transmission had already begun or where there were early outbreaks, and we have achieved results," Vizzotti said. She emphasized the role of social organizations and churches, which help build public trust both during and after territorial outreach.

Vizzotti said that the effects of the Detectar program extend beyond the pandemic. "It has also had a very positive impact on links between the government and the community, with different areas of government working in coordination like never before," she said, adding that, "In this way, we were also able to provide families with food, drinking water, and hygiene tools so that they can isolate in their homes or communities. Devising a comprehensive strategy is a very important way to turn threats into opportunities."

Like other COVID-19 methodologies implemented in other parts of the country, the information and results obtained from each territorial outreach initiative under the Detectar program are entered into the National Health Surveillance System (SNVS), where all cases of reportable diseases are recorded. The system's design allows other organizations to develop complementary modules to make practical use of the SNVS database.

Go.Data, a tool developed by the World Health Organization (WHO) and its partners in the Global Network of Outbreak Alerts and Responses (GOARN) to facilitate the organization and management of data in outbreaks, is especially useful for following up on close contacts of COVID-19 cases.

"Tracing people who were exposed is key, because quarantining them in time—before they come in contact with other people—helps put pressure on the virus and break the transmission chain," said Maureen Birmingham, PAHO representative in Argentina for the past five years.

Go.Data is available for all operating systems and also has mobile versions. It collects data from the SNVS and processes it in a clear and very practical graphic environment, facilitating surveillance of positive cases and their close contacts. This allows epidemiologists to intuitively record, organize, and analyze information, with indicators that allow them to immediately detect alarm symptoms and develop timely strategies to solve problems.

By early October, 19 jurisdictions across the country had used Go.Data to process information and between April and August more than 400 people were trained to do this. "We are working with Argentina to train people in case surveillance. Go.Data is an application that helps expand tracing and scale it up faster," Birmingham stressed.

"We know that testing and contact tracing, along with community engagement, are essential for flattening the curve and bringing it down," the PAHO representative insisted. "Several countries have succeeded in doing so; they started with intense transmission and achieved good results with this set of measures. That's the good news: the measures work. We don't have to wait for the vaccine; infections can be contained now."

To achieve this objective, field work is key, along with precise, effective monitoring of the information collected there. It is hard, methodical work with long-term results, but the thousands of people involved, including Sofia, seem willing to do it: "I really like what I do, and even though I was afraid at first and sometimes we've been in tough situations, I feel that by putting my all into it like this, I'm adding my grain of sand to beat the pandemic."