Health Services in Azángaro: A trek through rural Potosi

The road to Sucre, Bolivia is the only paved road traveled every Monday by staff from the Azángaro Health Center, which reports to the department of Potosí.

The road to Sucre, Bolivia is the only paved road traveled every Monday by staff from the Azángaro Health Center, which reports to the department of Potosí. However, that road is only part of the journey they take to bring vaccination services to rural communities. 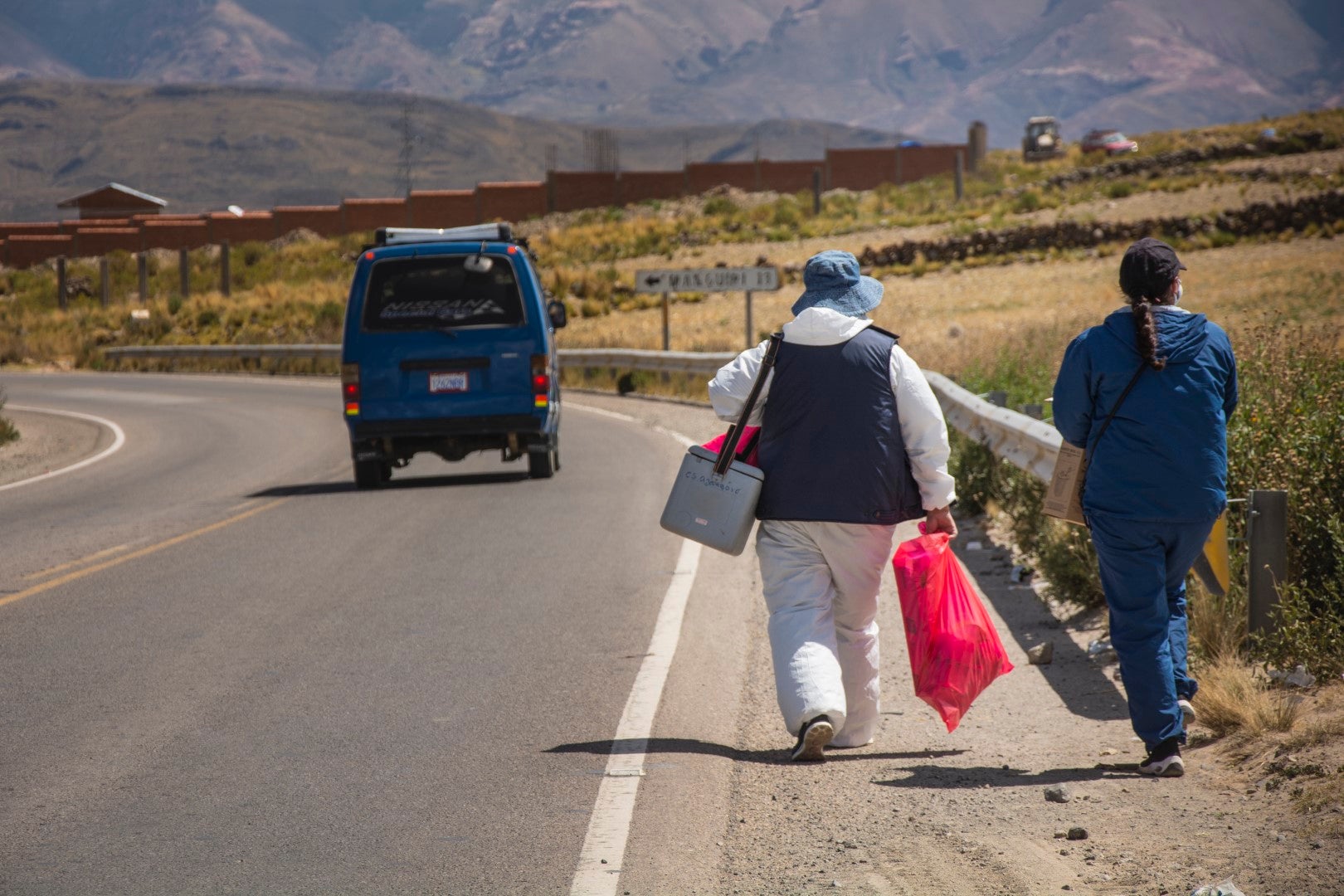 The town of Azángaro is part of district 14 in the department of Potosí, Bolivia. Last 10 November, to commemorate the anniversary of the date this department was founded, the doors of the new facilities of the Azángaro Health Center opened to the public. Although this facility is approximately 15 km away from the city of Potosí, its staff offers health care services to 21 adjacent communities, which are far away and spread out.

Ms. Roxana Villca is part of the medical staff. She is in charge of the EPI (Expanded Program on Immunization) at this center, where she has been working for more than 25 years. She and two other team members (social worker Beatriz Condori and ambulance driver Román Quispe) are responsible for vaccinating people who live in that area. 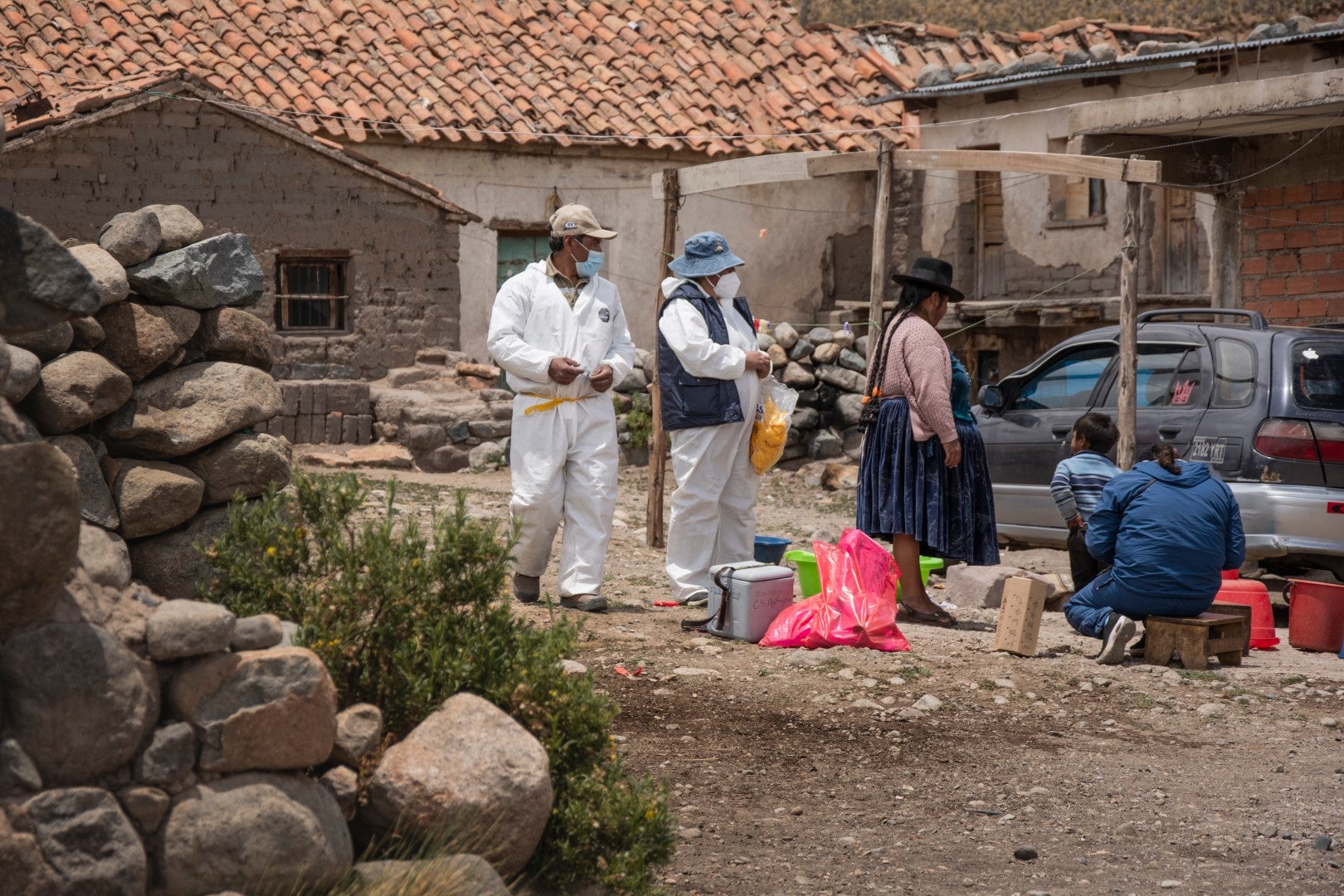 The Azángaro Health Center can only use the ambulance services of the deputy mayor’s office one day a week: Monday. On the other days, Román helps other health centers, such as the one in Karachipampa. This is why they take the initiative to travel to the most remote sectors. 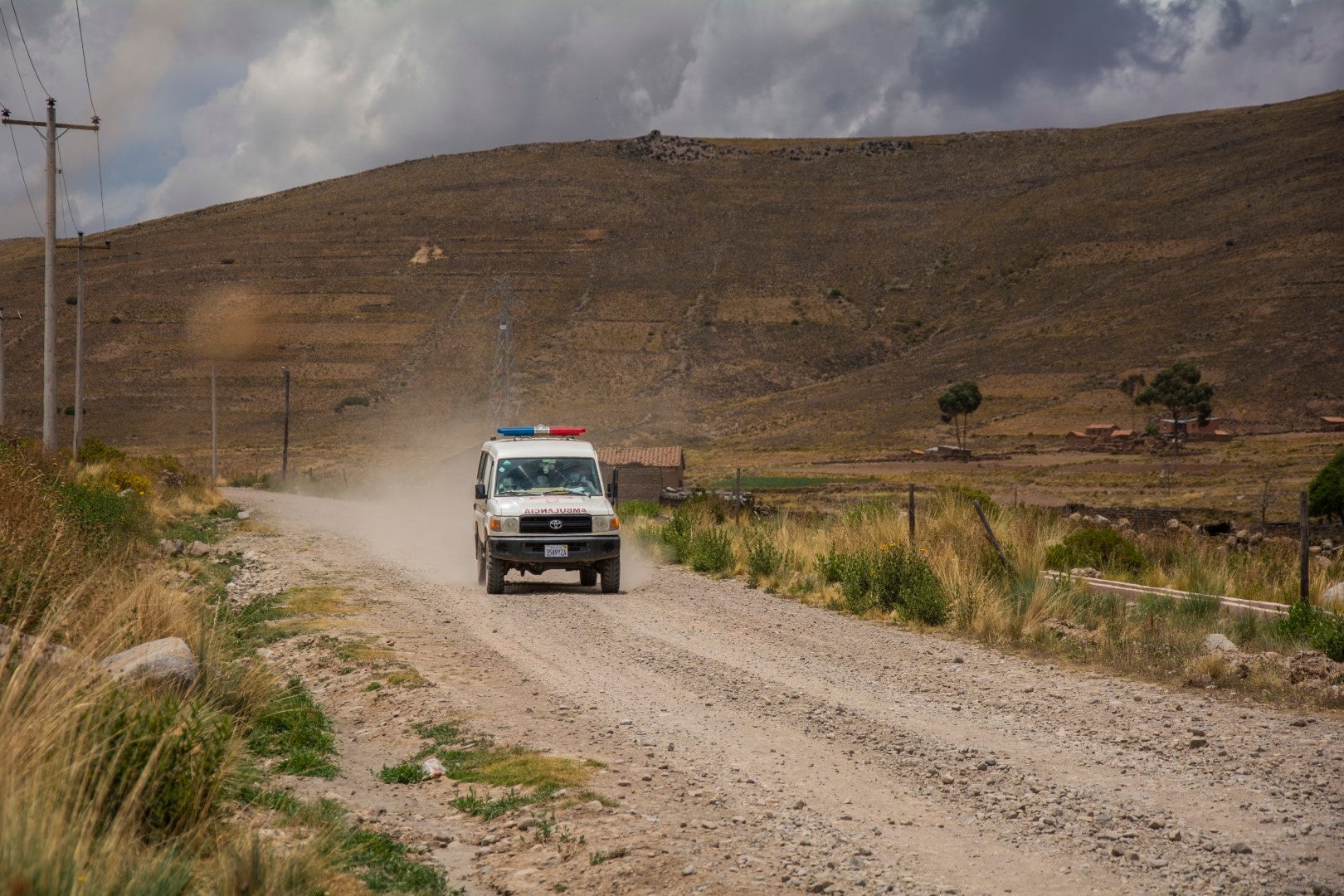 “We didn’t have an ambulance for ten years, so we walked the entire way. Now there are only a few places we need to walk to because it’s Monday, but on other days we have to travel on foot. […] Back then I could walk but not now; it’s harder now that I’m older.” Roxana Villca 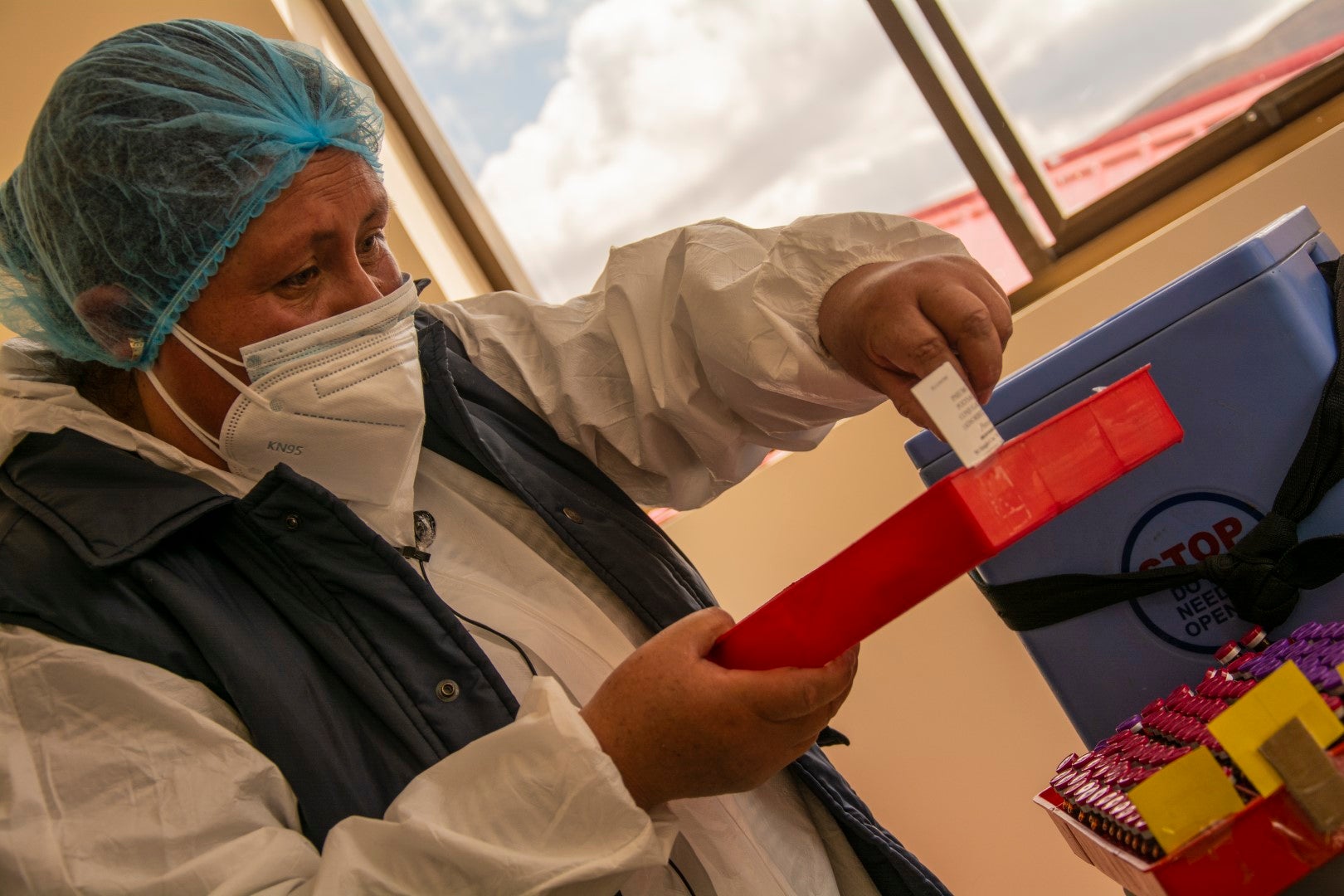 Roxana prepares the vaccines scheduled for the day, and always takes a few extras on Mondays to ensure maximum coverage. The Azángaro Health Center used to achieve 80% of the scheduled vaccinations. The COVID-19 pandemic not only led to major changes in the health care system, but affected small sectors such as this one. As of October, they were only able to give 30% of scheduled vaccinations, despite the extraordinary efforts of health workers. 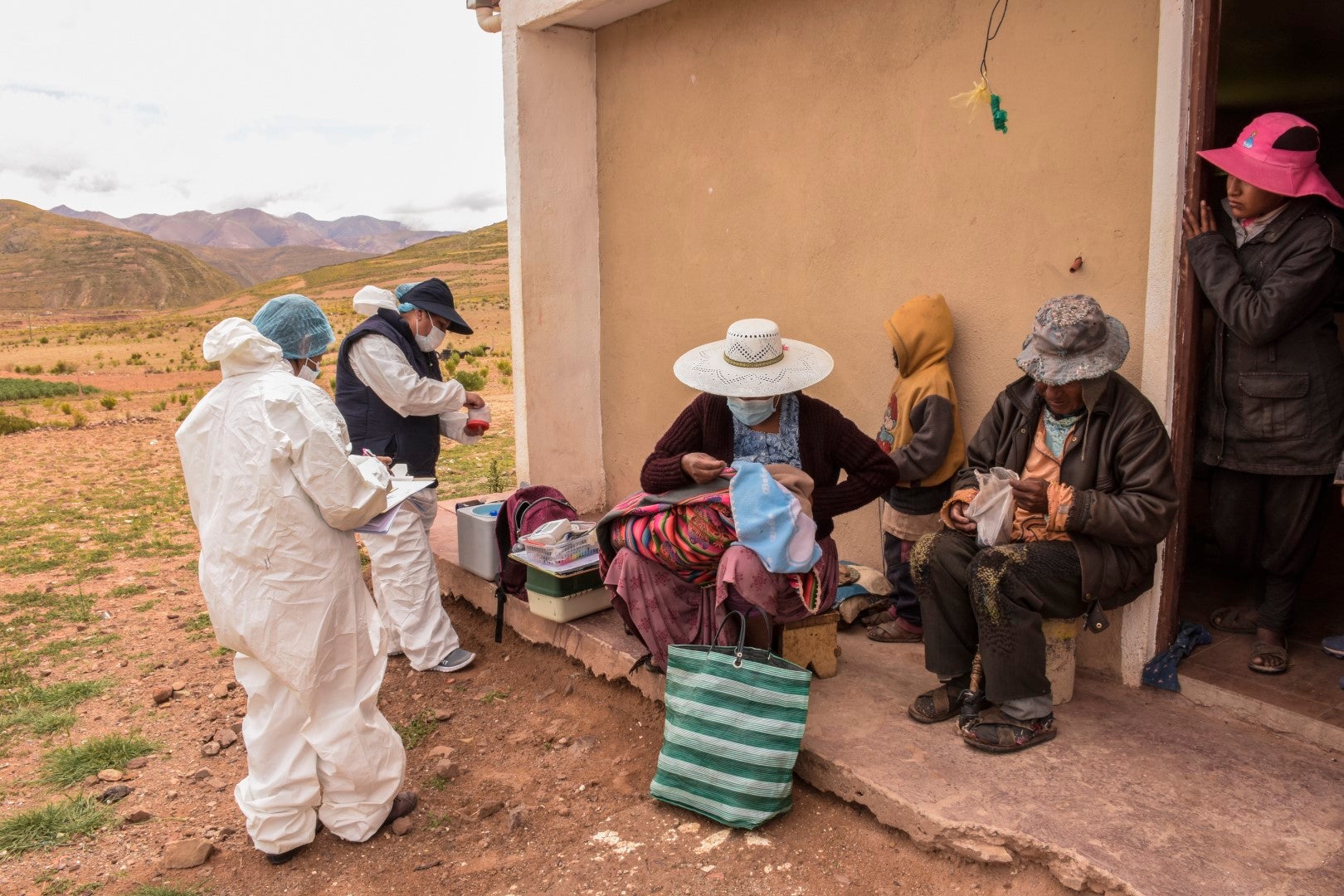 When ready, the staff leaves early every Monday to do their job. The part of the trip on the paved road is the shortest, and they will soon turn onto dirt roads to reach the communities. Beatriz announces their arrival by shouting out, since there’s no other way to do it. When they run into the residents, she and Roxana give a short initial talk in the Quechua language, which is predominant in these rural areas. 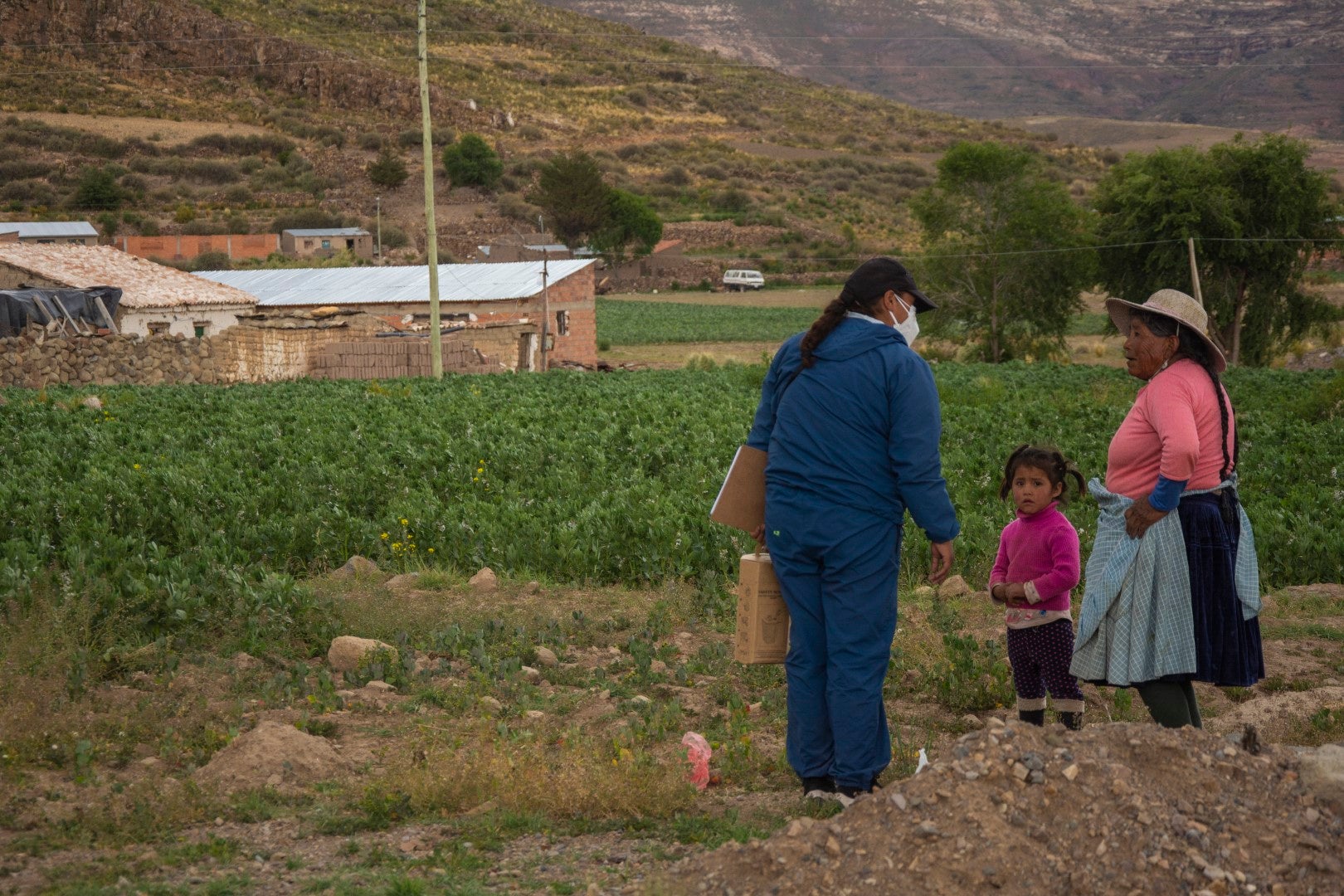 They proceed to vaccinate children under the age of 1, primarily against measles. On 23 October Bolivia recorded the first case of measles in 20 years. Nonetheless, mothers and older sisters take this opportunity to receive the tetanus vaccine, which they had inadvertently missed. 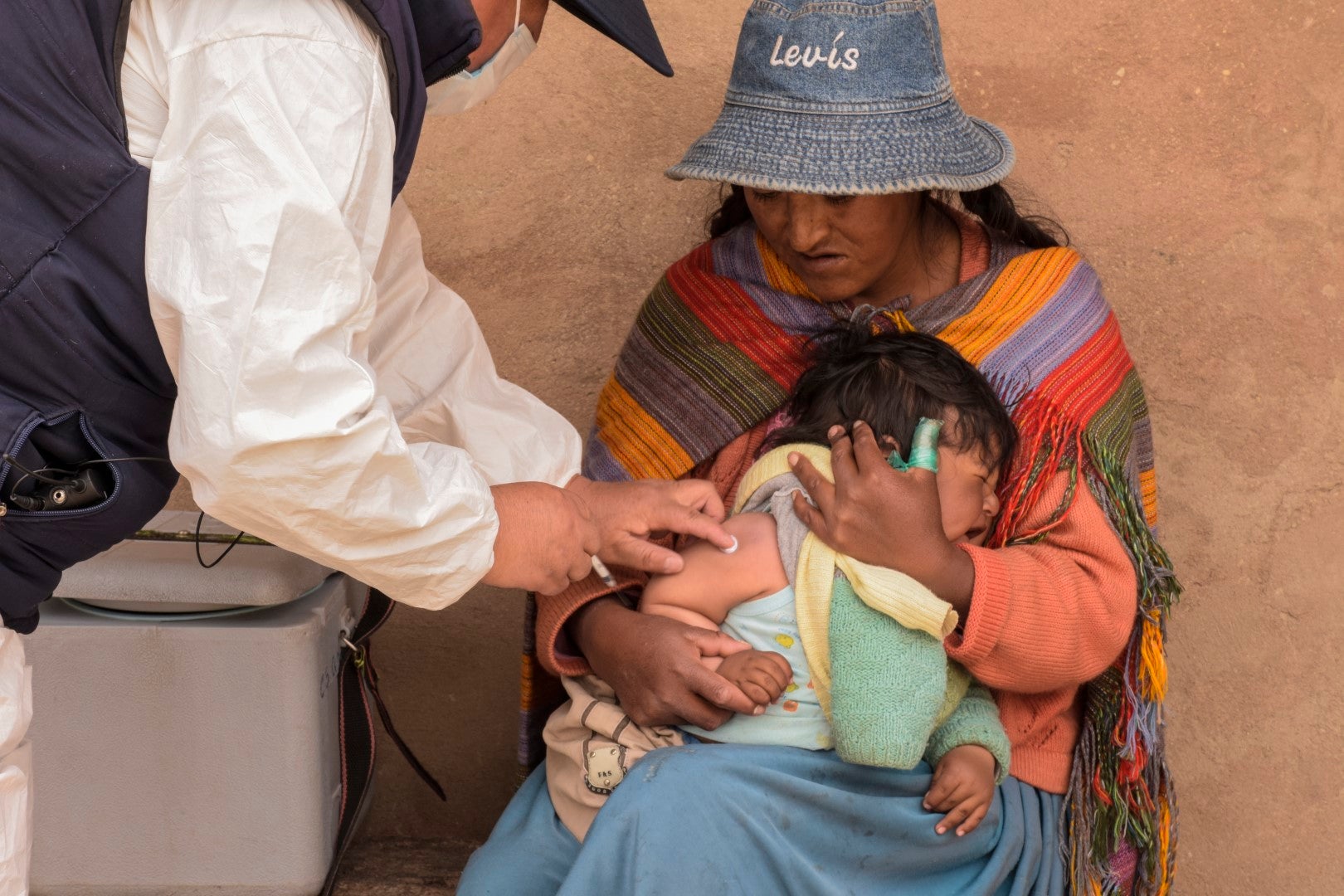 At each home they visited, at least one older adult was not only immunized but also seen by the team that provides supplements, food, and medical care. Most of the population in this geographical area are older adults. Younger people tend to migrate to the city with their children for work reasons. 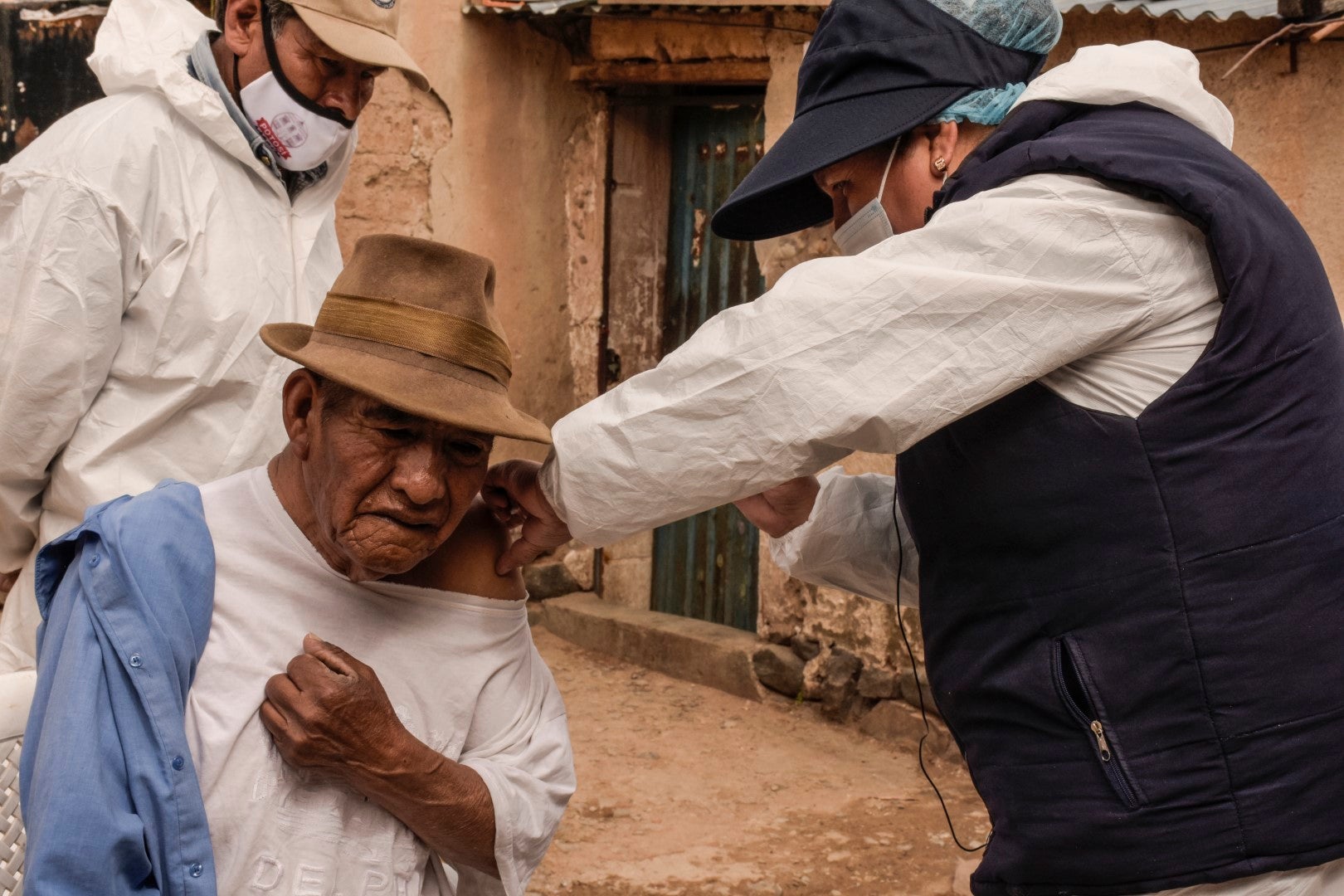 “The three of us, the nurse, the driver who always takes us, and the social worker […] go out to help older adults in their homes.” Beatriz Condori 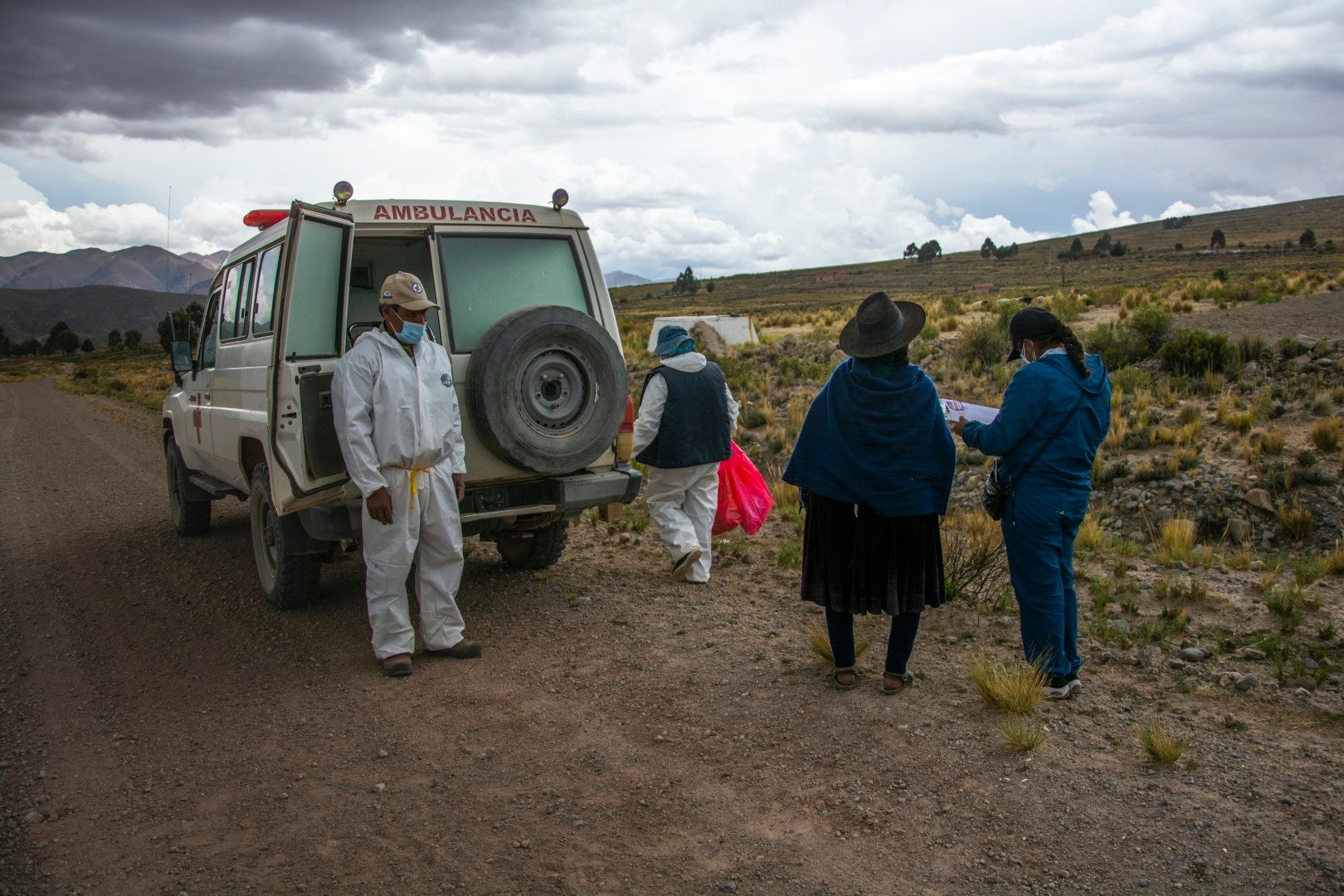 This was the case of Hilarión, who they found outside his home, contemplating his harvest. Besides complaining about a problem molar, he asked to be vaccinated against a “cold.” Because of his age and the pandemic, he was unable to go to the health center or get the flu vaccine during the campaign in June. He wants to be immunized to prevent the ailments caused by the end-of-year rainy season. 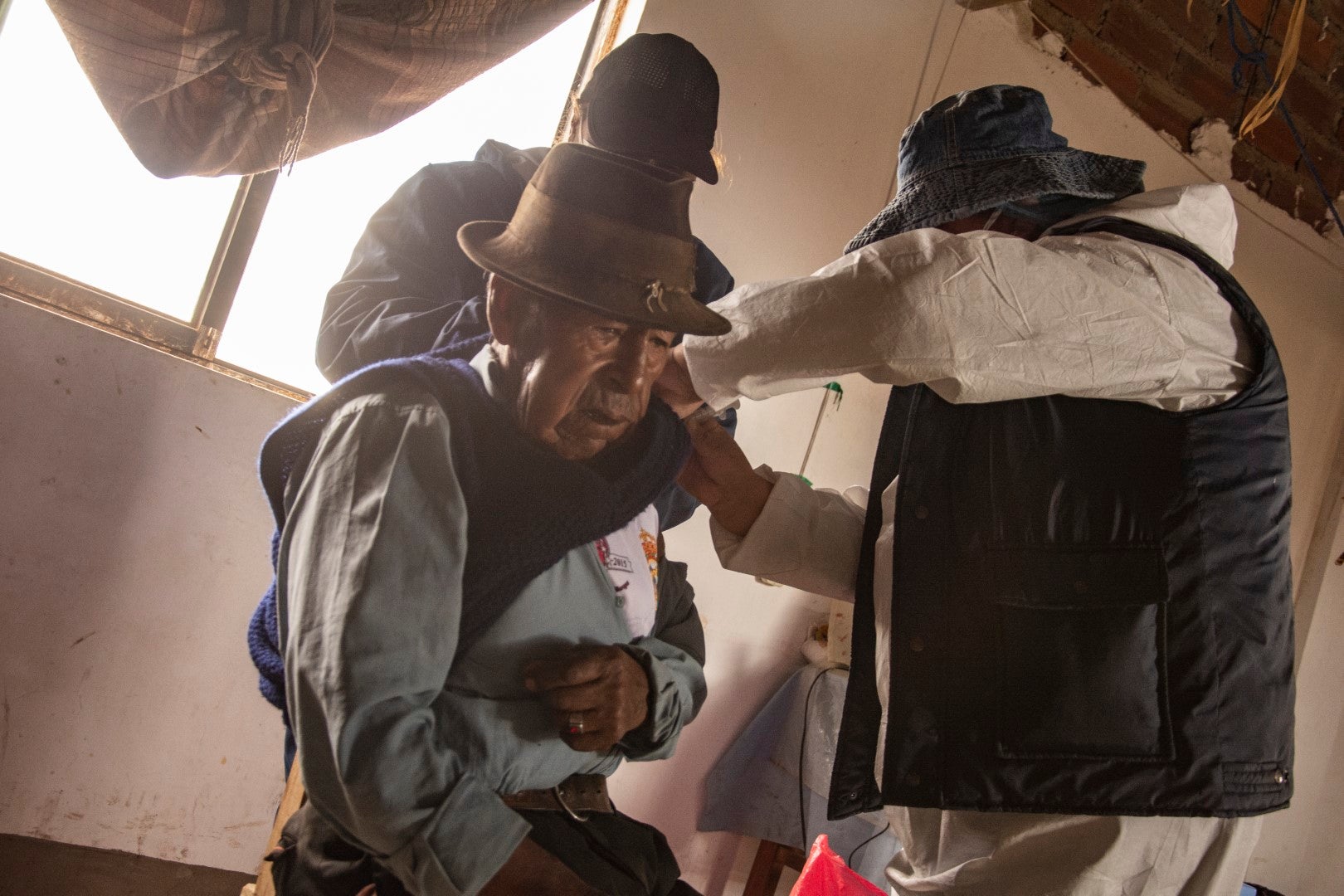 While they were vaccinating Hilarión, the rain began to fall. The team says these problems are normal in their day-to-day work. There are days when they get drenched by rain and others when they have to walk on the dirt, because the sun is so hot the asphalt burns the soles of their feet. This is even more common mid-week, when the ambulance is not available. 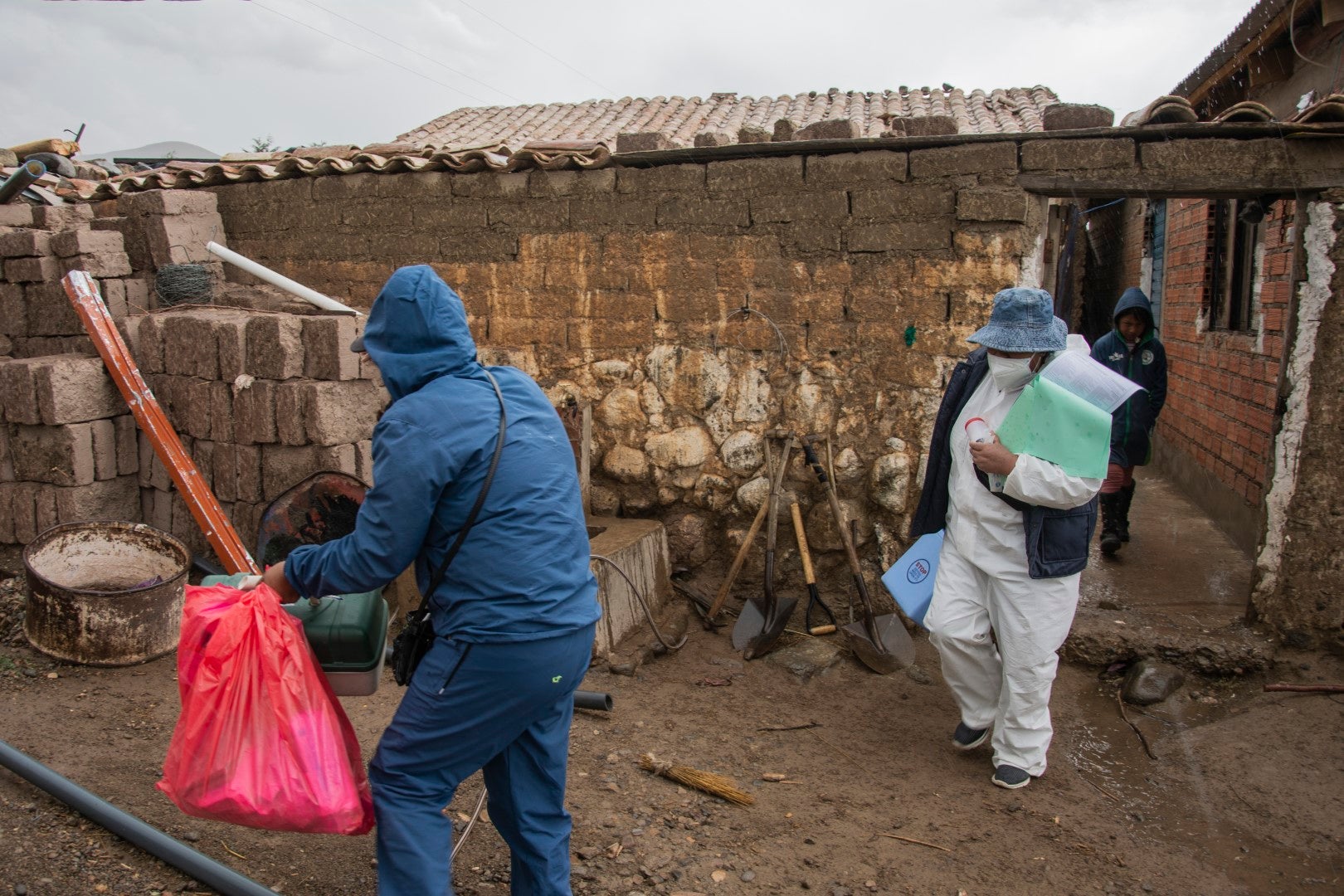 Nonetheless, they continue to work with the sole objective of protecting the health of the population. “I’ve been working so long I know most of the people that live here, and I want them to be in good health. That is my main concern.” Roxana Villca “We are here to help the local people who need our care. […]Life is important” Beatriz Condori 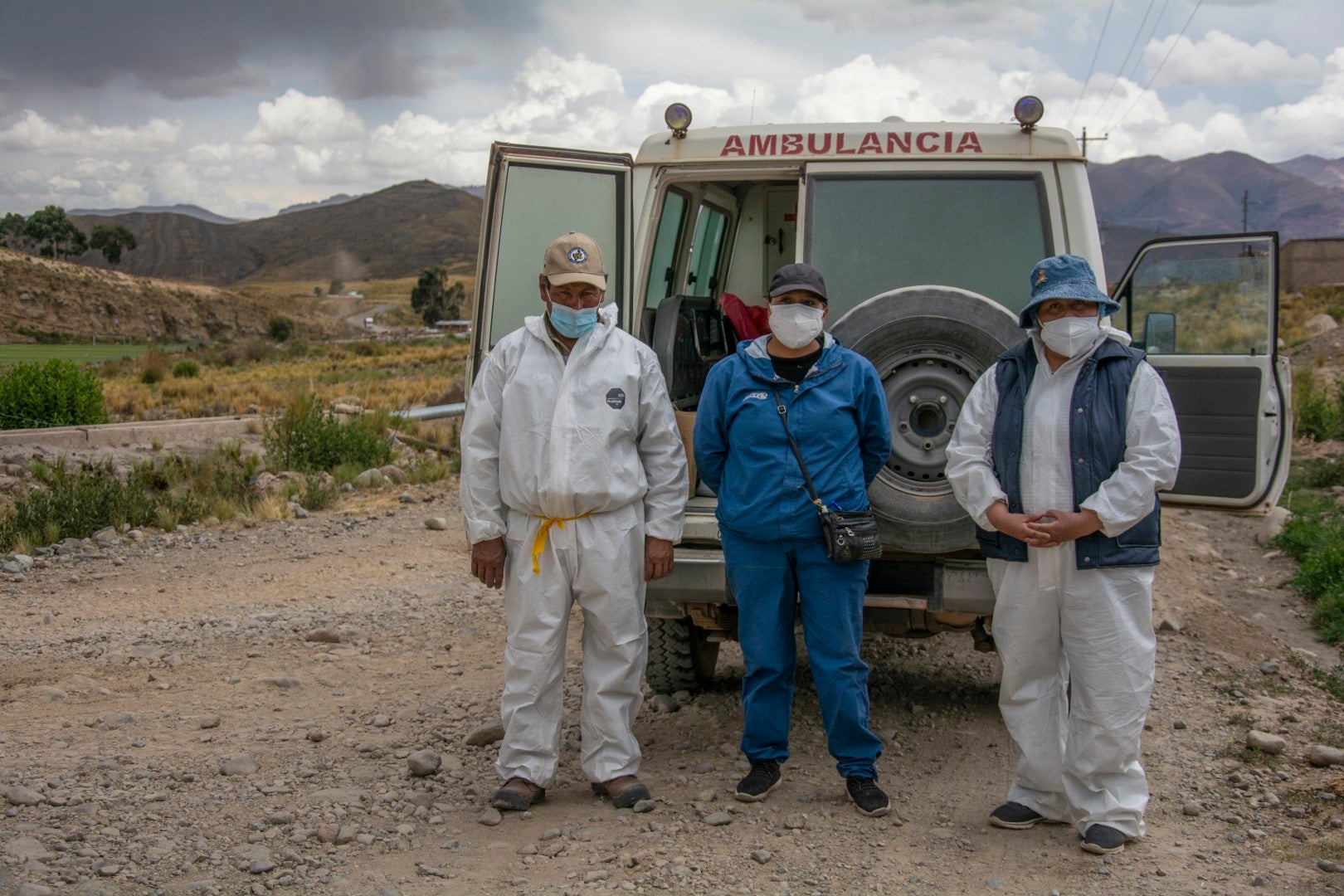