Human echinococcosis is a parasitic disease caused by tapeworms of the genus Echinococcus.

The two most important forms of the disease in humans are cystic echinococcosis (hydatidosis) and alveolar echinococcosis. Humans are infected through ingestion of parasite eggs in contaminated food, water or soil, or through direct contact with animal hosts.

Echinococcosis is often expensive and complicated to treat and may require extensive surgery and/or prolonged drug therapy. Prevention programs focus on the deworming of dogs and sheep, which are the definitive hosts. In the case of cystic echinococcosis, control measures also include improved food inspection, slaughterhouse hygiene, and public education campaigns. The vaccination of lambs is currently being evaluated as an additional intervention.

More than 1 million people are affected with echinococcosis at any one time.

Initiative for the control of cystic echinococcosis

Hydatidosis, or cystic echinococcosis, is an important zoonosis for the Region, since it registers a significant frequency in many countries of the continent, with a different presentation burden, affecting mainly dogs (in the form of definitive hosts), cattle, sheep and pigs (intermediate hosts) and particularly the health of humans. Its impact, although manifest, is not sufficiently measured. Its presentation, in each latitude, is very influenced by the differences of its ecosystems, but also by the form and intensity in the approach of the problem, usually avoiding the interdependencies that surpass the physical borders of the nations.

The implementation of the Southern Cone Subregional Surveillance and Control of Hydatidosis Project: Argentina, Brazil, Chile and Uruguay, is part of a mandate that PAHO/WHO received from its Member States, beginning with the 12th Interministerial Meeting on Health and Agriculture (RIMSA), held in São Paulo, Brazil, in the year 2001.

The fact that several meetings have been completed already expresses the importance and represents the efforts that countries are giving to the subject. But there are other aspects that deserve to be highlighted, such as the adequate vision to recognize the problem from a plural point of view, with the need for joint and integrated efforts, between countries, between sectors and disciplines, and supported by technical cooperation agencies that they complement in their functions.

There have been achievements. However, we make it a matter of highlighting some of them, precisely because of their importance, as fundamental points for adapting and guiding interventions and future initiatives to combat hydatidosis in the Region, such as:

PAHO supports the application of new lessons and advances new initiatives to strengthen the responsibility of each country and incorporate effective and innovative proposals.

WHO estimated in 2015 that echinococcosis caused
19,300
deaths and around
871,000
disability-adjusted life-years (DALYs) globally each year.

Search for Echinococcosis on the VHL

A number of herbivorous and omnivorous animals act as intermediate hosts of Echinococcus. They become infected by ingesting the parasite eggs in contaminated food and water, and the parasite then develops into larval stages in the viscera.

Carnivores act as definitive hosts for the parasite, and host the mature tapeworm in their intestine. They are infected through the consumption of viscera of intermediate hosts that harbour the parasite.

Several distinct genotypes of E. granulosus are recognised, some having distinct intermediate host preferences. Some genotypes are considered species distinct from E. granulosus. Not all genotypes cause infections in humans. The genotype causing the great majority of cystic echinococcosis infections in humans is principally maintained in a dog–sheep–dog cycle, yet several other domestic animals may also be involved, including goats, swine, cattle, camels and yaks.

Alveolar echinococcosis usually occurs in a wildlife cycle between foxes, other carnivores and small mammals (mostly rodents). Domesticated dogs and cats can also be infected.

Human infection with E. granulosus leads to the development of one or more hydatid cysts located most often in the liver and lungs, and less frequently in the bones, kidneys, spleen, muscles, central nervous system and eyes.

The asymptomatic incubation period of the disease can last many years until hydatid cysts grow to an extent that triggers clinical signs, however approximately half of all patients that receive medical treatment for infection do so within a few years of their initial infection with the parasite.

Abdominal pain, nausea and vomiting are commonly seen when hydatids occur in the liver. If the lung is affected, clinical signs include chronic cough, chest pain and shortness of breath. Other signs depend on the location of the hydatid cysts and the pressure exerted on the surrounding tissues. Non-specific signs include anorexia, weight loss and weakness.

Alveolar echinococcosis is characterized by an asymptomatic incubation period of 5–15 years and the slow development of a primary tumour-like lesion which is usually located in the liver. Clinical signs include weight loss, abdominal pain, general malaise and signs of hepatic failure.

Larval metastases may spread either to organs adjacent to the liver (for example, the spleen) or distant locations (such as the lungs, or the brain) following dissemination of the parasite via the blood and lymphatic system. If left untreated, alveolar echinococcosis is progressive and fatal.

Cystic echinococcosis is globally distributed and found in every continent except Antarctica. Alveolar echinococcosis is confined to the northern hemisphere, in particular to regions of China, the Russian Federation and countries in continental Europe and North America.

In endemic regions, human incidence rates for cystic echinococcosis can reach more than 50 per 100 000 person-years, and prevalence levels as high as 5%–10% may occur in parts of Argentina, Peru, East Africa, Central Asia and China. In livestock, the prevalence of cystic echinococcosis found in slaughterhouses in hyperendemic areas of South America varies from 20%–95% of slaughtered animals.

The highest prevalence is found in rural areas where older animals are slaughtered. Depending on the infected species involved, livestock production losses attributable to cystic echinococcosis result from liver condemnation and may also involve reduction in carcass weight, decrease in hide value, decrease of milk production, and reduced fertility.

Ultrasonography imaging is the technique of choice for the diagnosis of both cystic echinococcosis and alveolar echinococcosis in humans. This technique is usually complemented or validated by computed tomography (CT) and/or magnetic resonance imaging (MRI) scans.

Cysts can be incidentally discovered by radiography. Specific antibodies are detected by different serological tests and can support the diagnosis. Biopsies and ultrasound-guided punctures may also be performed for differential diagnosis of cysts from tumours and abscesses.

The choice must primarily be based on the ultrasound images of the cyst, following a stage-specific approach, and also on the medical infrastructure and human resources available.

For alveolar echinococcosis, early diagnosis and radical (tumour-like) surgery followed by anti-infective prophylaxis with albendazole remain the key elements. If the lesion is confined, radical surgery can be curative. Unfortunately in many patients the disease is diagnosed at an advanced stage. As a result, if palliative surgery is carried out without complete and effective anti-infective treatment, frequent relapses will occur.

Early detection of E. granulosus and E. multilocularis infections, especially in low-resource settings, is still needed in addition to the evaluation of clinical treatment options. Further assessment and potential commercialization of a vaccine for E. granulosus recombinant oncosphere antigen (EG95) is on trial in sheep to impede E. granulosus infection of lambs. This could supplement control measures such as the treatment of dogs and culling of older sheep.

Both cystic echinococcosis and alveolar echinococcosis represent a substantial disease burden. Worldwide, there may be in excess of 1 million people living with these diseases at any one time. Many of these people will be experiencing severe clinical syndromes which are life-threatening if left untreated. Even with treatment, people often face reduced quality of life.

For cystic echinococcosis, there is an average of 2.2% post-operative death rate for surgical patients and about 6.5% of cases relapse after an intervention, thereby requiring prolonged recovery time.

The 2015 WHO Foodborne Disease Burden Epidemiology Reference Group (FERG) estimated echinococcosis to be the cause of 19 300 deaths and around 871 000 disability-adjusted life-years (DALYs) (1) globally each year.

Annual costs associated with cystic echinococcosis are estimated to be US$ 3 billion for treating cases and losses to the livestock industry.

Robust surveillance data is fundamental in order to show burden of disease and to evaluate progress and success of control programmes. However, as for other neglected diseases which are focused in underserved populations and remote areas, data is especially scarce and will need more attention if control programmes are to be implemented and measured.

Surveillance for cystic echinococcosis in animals is difficult because the infection is asymptomatic in livestock and dogs. Surveillance is also not recognized or prioritized by communities or local veterinary services.

Cystic echinococcosis is a preventable disease as it involves domestic animal species as definitive and intermediate hosts. Periodic deworming of dogs, improved hygiene in the slaughtering of livestock (including the proper destruction of infected offal), and public education campaigns have been found to lower and, in high-income countries, prevent transmission and alleviate the burden of human disease.

A programme combining vaccination of lambs, deworming of dogs and culling of older sheep could lead to elimination of cystic echinococcosis disease in humans in less than 10 years.

Prevention and control of alveolar echinococcosisis more complex as the cycle involves wild animal species as both definitive and intermediate hosts. Regular deworming of domestic carnivores that have access to wild rodents should help to reduce the risk of infection in humans.

Deworming of wild and stray definitive hosts with anthelminthic baits resulted in significant reductions in alveolar echinococcosis prevalence in European and Japanese studies. Culling of foxes and unowned free-roaming dogs appears to be highly inefficient. The sustainability and cost–benefit effectiveness of such campaigns are controversial. 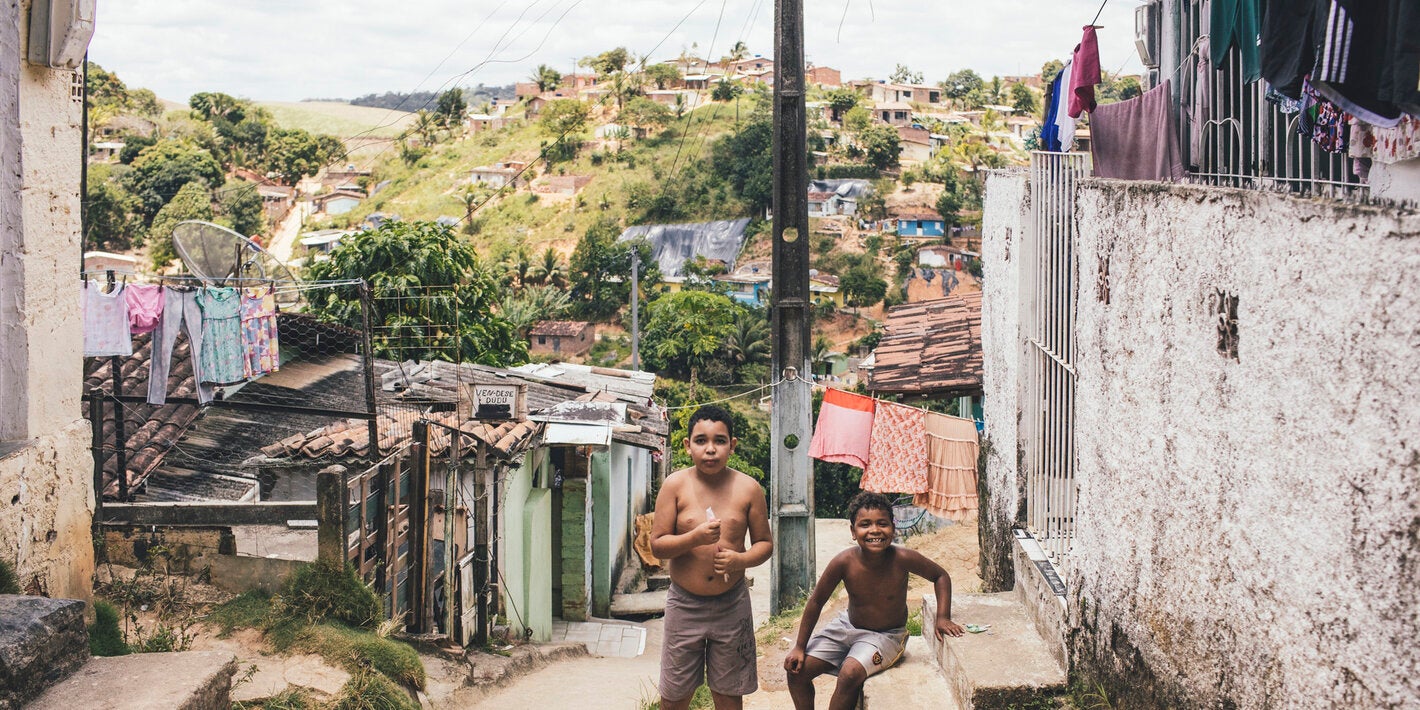 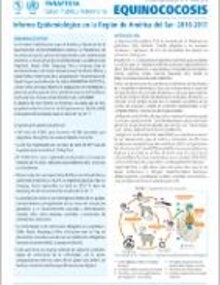 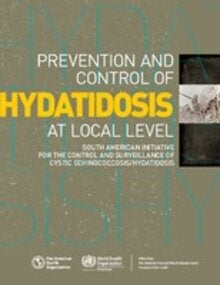 26 Apr 2019
Prevention and Control of Hydatidosis at Local Level: South American Initiative for the Control and Surveillance of Cystic Echinococcosis/Hydatidosis 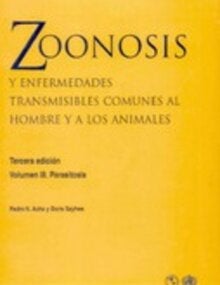 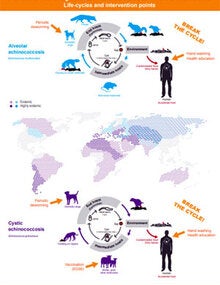 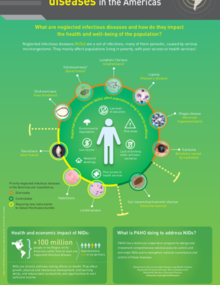 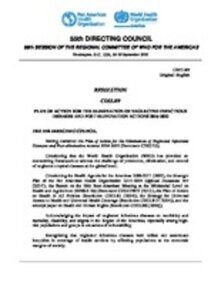 6 Oct 2016
CD55.R9 - Plan of Action for the Elimination of Neglected Infectious Diseases and Post-elimination Actions 2016-2022
END_OF_DOCUMENT_TOKEN_TO_BE_REPLACED
Copied to clipboard