In addition to tobacco taxes, WHO considers "best buys" as highly cost-effective and feasible to implement: 1) the establishment of 100% smoke-free environments in enclosed public and workplaces and public transport, 2) large graphic health warnings on tobacco product packaging and/or plain packaging, and 3) comprehensive ban on tobacco advertising, promotion and sponsorship. Other tobacco control measures, such as monitoring tobacco use and offering help to quit, are also necessary to reduce tobacco use. As originally conceived in the WHO Framework Convention on Tobacco Control itself, these measures should be implemented in a comprehensive manner as tobacco control interventions are enhanced when implemented together.

In the Region of the Americas, most countries apply 100% smoke-free environments and large graphic health warnings. In contrast, only eight countries apply a comprehensive ban on tobacco advertising, promotion and sponsorship, six have cessation services at the highest level of application of best practices and only two apply plain packaging. As it is the case for tobacco taxation, the tobacco industry interference remains one of the main challenges in the implementation of these other tobacco control measures.

One of the arguments most often used by the tobacco industry to oppose these measures is their potential negative impact on the economy and employment. However, the global and regional evidence shows that tobacco control measures have no effect, or even a net positive effect, on overall employment because tobacco-related job losses are offset by more jobs in other sectors. In the case of smoke-free environments, they do not harm the hospitality industry and may even have a positive impact on this industry. Finally, for growers and manufacturers impacted by the drop in demand for tobacco products, there are economically viable programs and alternatives to growing and manufacturing tobacco products.

A major challenge in tobacco control in the Region of the Americas is that only eight countries apply regulations to comprehensively ban tobacco advertising, promotion, and sponsorship. This measure is effective in reducing tobacco consumption, contributing to reducing exposure to misleading information, preventing youth from experimenting with tobacco, and denormalizing tobacco use. Its implementation, like the implementation of other key tobacco control measures, leads to significant economic benefits that far outweigh the costs of implementation.

To oppose tobacco control measures, the tobacco industry has also used litigations based on international trade law arguments. One example is the case of Australia, where a small number of countries brought a dispute before the World Trade Organization (WTO) over the introduction of plain packaging, arguing that the measure was more trade restrictive than necessary to protect human health and interfered with trademark rights. The WTO ruled to reject the complaint as it considered that plain packaging is "capable of contributing, and in fact does contribute" to Australia's objective of improving public health. From the jurisprudence of this case, and other cases such as Uruguay, it is clear that the substantive right of States to regulate the use and consumption of products such as tobacco to protect health has been legally recognized - both internationally and locally - and that these measures are consistent with trade and investment agreements. 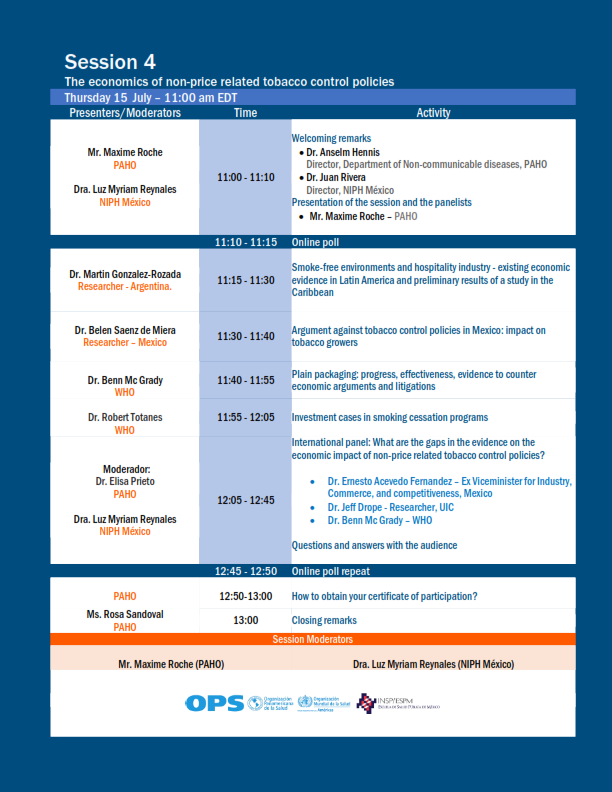 Objectives of the session: